It seems like we’ll be hearing from Rockstar’s developers about the working conditions at the Red Dead Redemption 2 studio over the next few days.

Updates: An number of anonymous developers from Rockstar Games has spoken to VG247 to reveal their different experiences at the studios, ranging from frustration at recent portrayals of the company, to those that suggest unrewarded long hours can be the norm for some departments.

One employee said that they have only done "minor crunch" to get Red Dead Redemption 2 out of the door on time, and that they are rewarded for extra working hours. 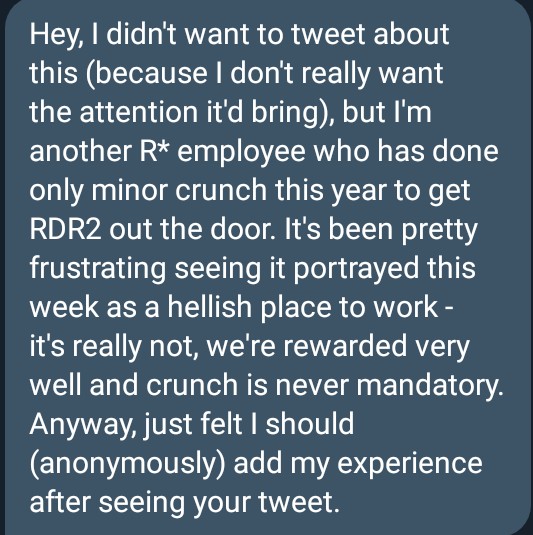 Another has said that different departments are treated differently, suggesting QA in particular gets a raw deal when it comes to overtime. 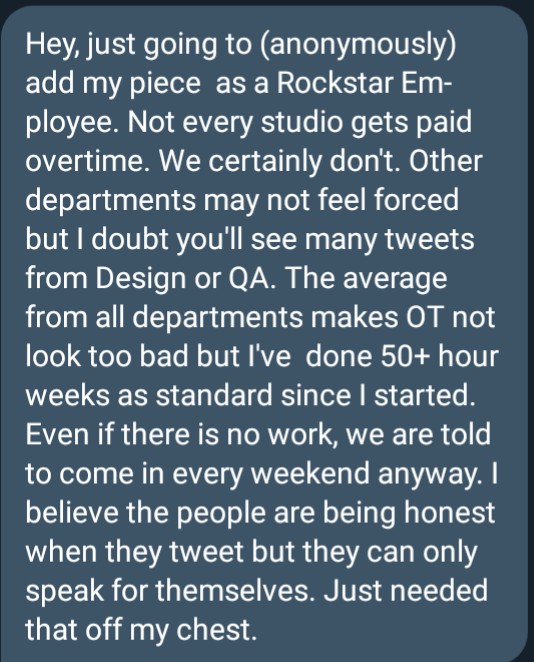 Others are openly discussing their experiences at the company on social media, suggesting overtime and crunch is only ever optional.

Just to add a concrete example of what I'm talking about. During the dev. of RDR I sometimes worked 50 hours during the week. This was on and off for a few months. And by on and off I really do mean off. Some weeks I just worked a flat 40 and there was zero issues with this.

Original story: Rockstar recently came under fire on social media due to an interview with founder Dan Houser, in which he said the studio worked a few 100 hour weeks in the lead up to the game’s release.

Houser has since clarified that statement, saying he was talking specifically about himself and a handful of writers, and that “No one, senior or junior, is ever forced to work hard.”

Since then, everyone has been weighing in on the controversy, from ex employees to other developers and even video game critics. One prominent tweet from Job Stauffer, who previously worked in a PR role at Rockstar during GTA 4’s release, claims the conditions were subpar a decade ago:

It's been nearly a decade since I parted from Rockstar, but I can assure you that during the GTA IV era, it was like working with a gun to your head 7 days a week. "Be here Saturday & Sunday too, just in case Sam or Dan come in, they want to see everyone working as hard as them." https://t.co/TaQS5LnaAa

Now Rockstar has relaxed its rules around its staff speaking about the studio on social media. Vivianne Langdon, a tools programmer at Rockstar Games in San Diego, has kicked things off with a short thread saying she has never worked more than 50 hour weeks.

I have never worked more than maybe 50 hours a week (and that's a rare occurrence), but I generally work about 2-6 hours of paid overtime per week.

The tweet thread has gathered nowhere near as much traction as the ones that ignited the controversy in the first place, but Langdon says Rockstar is allowing its staff to post frankly about their jobs, so expect to see more like this in the coming days.

Whether these hours extend to non-salaried teams is unclear. We’ve reached out to Rockstar for comment.