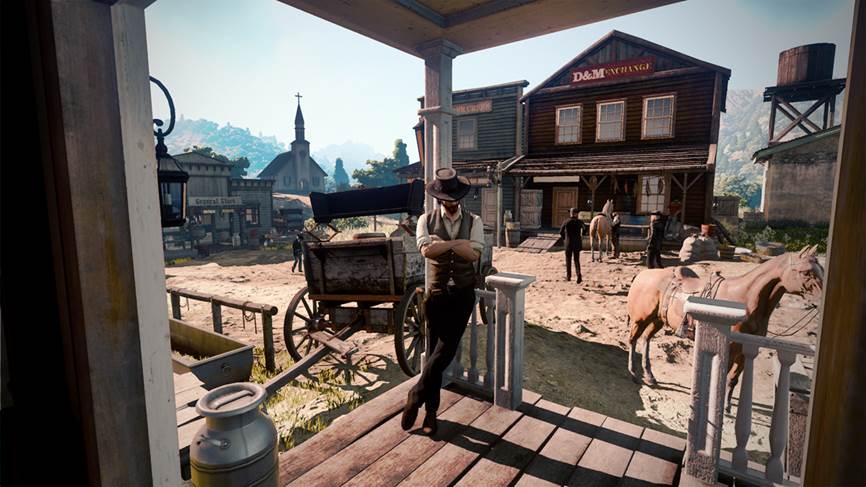 Update: Yesterday's Red Dead Redemption 2 leak has proved to be - well, not fake, but not what we many of us hoped for in the face of all evidence.

The purported Red Dead Redemption 2 screenshot actually shows a PC MMO called Wild West Online, according to a report from PC Gamer. It sounds pretty interesting, given that PC players can't even play the original Red Dead Redemption, but it's not what we're after, is it?

Wild West Online's developers openly acknowledge Rockstar's western epic as inspiration, which explains why it was so easily mistaken for a rough Red Dead Redemption 2 image. Whether the confusion was a genuine mistake by the original poster, a troll, or a viral campaign for the MMO's upcoming Kickstarter -well. We'll again let you make up your own mind.

Original article: Over on the GTAforums, a person popped in and posted what's claimed to be a leaked image of Red Dead Redemption 2.

Many forum users are torn, citing various examples of why it's fake, others arguing for legitimacy. It's hard to tell if it's the latter since it appears to be a shot taken of an on-screen image.

This could be the explanation for the color looking washed out, and the rather "cartoonish" appearance. But some users are even more skeptical than usual because, as they pointed out, the person who posted the image is a new member, and they skedaddled right after posting.

If it is legitimate, suspicion leans toward an early build as little touches such as cleaner lines, shadows, and finer details you'd expect to make the screen pop are absent.

Either way, it will give you something to talk about until Rockstar gives us more to look at other than a cinematic trailer.

Take-Two will host a call to investors at the end of the month, but the firm has never been one to spill its guts on those calls. Basically, don't expect executives to dish on any details unless it starts spitting snow in Hell.

E3 2017 will be the venue, so keep an eye on the Microsoft and Sony conferences. Especially the latter, due to players on PS4 getting “first access to earn select online content.”

If this image turns out to be real or fake, we'll let you know. GAF, reddit and users on the GTAforums are on the case.

Red Dead Redemption 2 is slated for release this fall.