What we've seen of Rage 2 so far has been all id Software's signature talent; close quarters shooting. The brutal gunplay we expect from the masters of Doom, slapped into Rage 2's pink apocalypse. It's rowdy and fast and deeply satisfying, with limbs lopped off and heads exploding. It's why we're excited.

In our second bout of hands-on gameplay we got to see more of the open world, its story missions and side hustles. As a co-developed project, this is where Avalanche should be excelling. The developer of Just Cause and Mad Max is known for its rampaging vehicles, vast environments, and the ability to blow any and everything to hell. But from what I've sampled so far it seems a little behind id's curve, with a world that's awkward to navigate, with limp racing taking you to uninspired missions.

"Although vehicles look souped-up with suspension and fat tyres to navigate the apocalypse, taking them off-road quickly turns into a disaster"

We're encouraged to sample the story missions in the open world, which take place roughly a quarter of the way through the main game. Essentially I need to run a few jobs for the mayor of Wellspring in order to bring down a character called Klegg. I'll need access to Klegg's heavily guarded location, and in order to worm my way inside I need to increase my reputation in the wasteland by entering two competitions; a race and an arena deathmatch.

Let's start with the vehicles. I need to drive to the Chas Car Derby to enter my first race so hop in my ride, highlight the map and put my foot down through the wasteland. Immediately my vehicle feels stiff and doesn't seem to have much in the way of speed. Over the course of the session I try around five different vehicles and to be honest they all feel basic, with only a handbrake, a boost and a weapon attachment. There's certainly no thrill to driving them.

Although they all look souped-up with suspension and fat tyres to navigate the apocalypse, taking them off-road quickly turns into a disaster. These are not all-terrain vehicles. They struggle with rocks and the environment in general, so trying to take shortcuts across the map becomes a chore. I'd imagined bounding over dunes and drifting through the dirt, not slowly crawling up a hill. I'm not sure if this is purely because the game isn't finished yet, or whether it's to keep the player to prescribed pathways. The fact that I thought I could take a shortcut but ended up driving off a ledge and falling to instant death makes me suspect this may be deliberate. In which case this open world isn't going to be that open and sticking to the roads seems to miss the point. 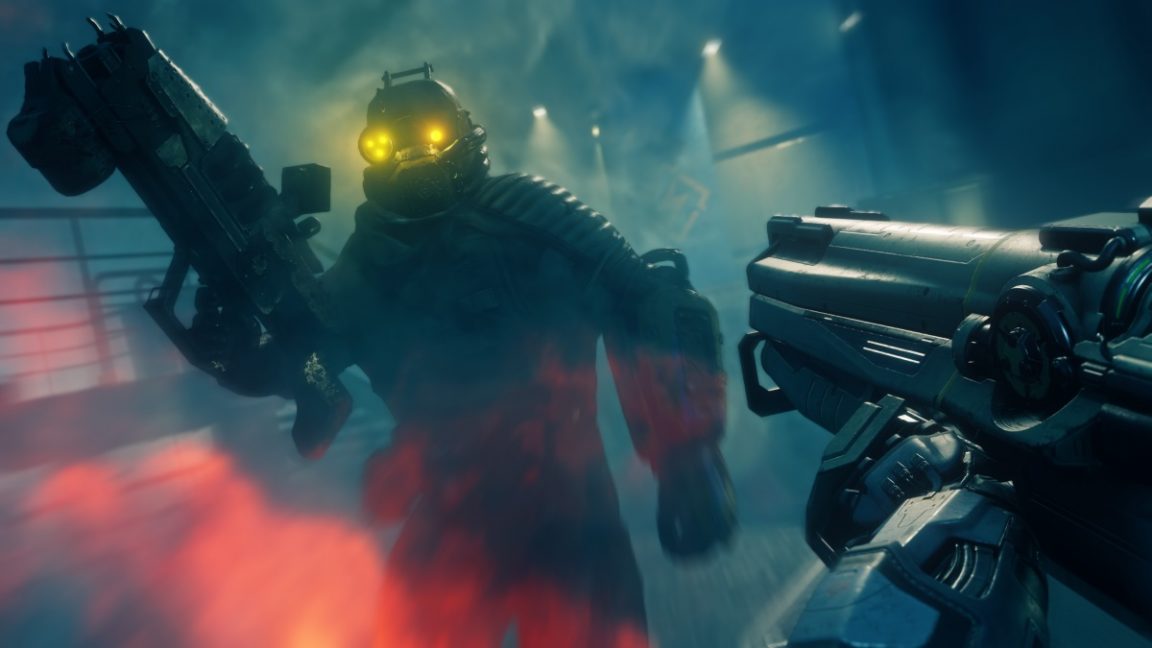 Actually entering a race in the Derby is a better experience, although the cars still feel too simple. This isn't a sim, granted, but the options of go, boost and handbrake fall short. There's no real drifting around corners when that handbrake is ripped up, and after the quick buzz of a boost the top speed of your vehicle doesn't feel very fast at all. There seems to be more thought put into the course itself, and this makes it a bigger thrill than cruising around the open world. With two or three inter-snaking paths and plenty of humps, it becomes a knockabout destruction derby, where dirty ramming tactics are as important than actual driving skill.

I raised the handling issues directly with Tim Willits, id Software's studio director, who agreed the racing feels different than driving around the open world, with the latter needing more work.

"I've been working my ass off to get that to feel good," he said of the Derby racing. "It's so hard because everyone drives differently. There's the Forza fans and then there's the Mario Kart fans. There are enough simulation type mechanics in the vehicles but the problem is it's too much for most players. We needed to make it more arcadey, more forgiving." As an example, he pointed towards the boost, which actually straightens the vehicle out on the track, rather than spinning them off. The idea is you handbrake around a corner and then boost to put you back on a straight line.

"But there's still some balancing that we need to do," admitted Willits. "It's too bumpy, right? We need to do some balancing on that. There's a lot of levers and knobs to turn and twist on the vehicles. But we did steer into more arcadey, fake physics."

Back in the game, and to gain more rep I enter Mutant Bash TV, a mode you'll have experienced from the first Rage. It's an arena showdown with escalating spawning enemies. It's as standard as video games ever get and you've played it so many times before. You stand in an empty arena as waves of enemies drop in to fuck you up. id's gunplay isn't at fault here - it's as brutal and crunchy as it ever is - but it can't lift the uninspired setting or challenge. There are a few buzzsaws thrown in for added spice, and you get to play around with your character's abilities here. Force-pushing enemies into blades never gets old, admittedly. Complete the arena and you've made enough of a name for yourself in the wasteland, which grants you access to Klegg. I didn't even bother to drive back to his place though - fast travel seemed like the less tedious option.

In between these missions I tried a few side quests, both of which amounted to destroying a blockade/gas station and everyone in it. That's fine, I guess, but nothing we haven't done many, many times before. The good news is there seems to be plenty of it, packed into the map over multiple biomes, so whether you're looking for distractions or not you're going to bump into them. All of these side missions will remain available after the main game is complete. 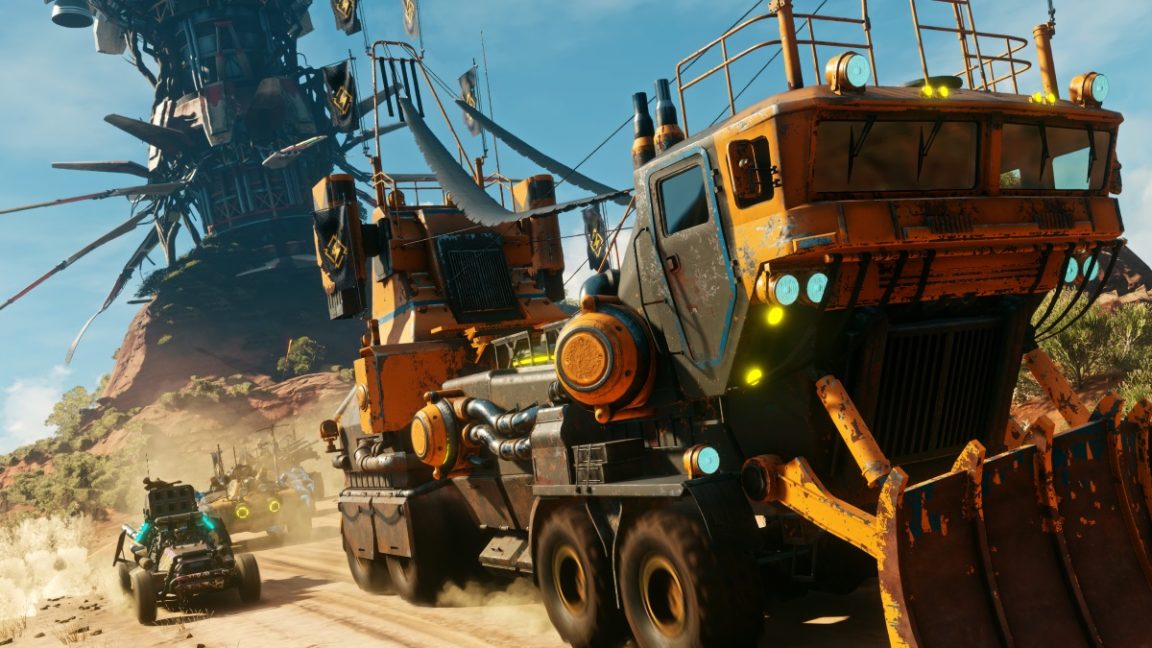 "After multiple deaths in a boss fight I ask for some help thinking that I've missed something. The advice? Shoot him in the face. That's it"

Rage 2's characters are a fun bunch and a highlight in what I've experienced so far. They're all a bit loopy, whether gung-ho, stoned or egocentric. Klegg's penthouse suite - where you need to copy some files while he's distracted - has a cosy fire with bundles of cash burning in the hearth just in case you didn't realise he's a spoiled shithead. You get caught stealing from him, which becomes another excuse to breakout id's wonderful gunplay. But it's a shame this gunfight ends in such a tired boss battle; circling a small room as a giant bad guy either pukes at me from a distance or stomps on me up close. There's spare ammo and health in the four corners of the arena. It's like 1992 all over again. After multiple deaths I ask for some help thinking that I've missed something. The advice? Shoot him in the face. That's it. Oh.

It's difficult to gauge any open-world game without spending hours in it, and the build we're playing is apparently pre-beta, so all of this comes with the usual caveats. The gunplay of Rage 2 isn't a problem here, but everything around it seems very average, whether story mission, side quest, racing or exploration. I need more time with it, and would be happy to jump back in to kick around the game for another couple of hours. I'm also disappointed that there's no co-op in Rage 2 unlike the original, and with no multiplayer I do wonder what will keep anyone coming back once they've explored and poked around. There's free DLC coming, sure, but would you even want it if it follows the formula of the main game?

Rage 2's pink-apoca-party looks like a lot of fun from a distance. But it all hangs on id's shooting, which is usually great in the controlled space of something like Doom. But I don't know if there's much of an appetite for it during an open world full of lukewarm takes on the average action shooter. Ubisoft's Far Cry New Dawn arrives sooner and that may steal some of its thunder. But then neither game seems that thunderous at this point, just a rumble in the distance.