In an alternative timeline, Bethesda made Fallout 5 instead of 76 and cleaned up its bugs.

That imaginary timeline isn't far from the Hellscape we inhabit in 2019, except it's Bethesda buddies Obsidian that have taken the Fallout formula, cleaned up the sloppy implementation and refined an adventure RPG that has all the early signs of evolving into its own series.

The Outer Worlds may reach across planets, but it's smaller in scale that Fallout 4 and New Vegas. It's a focused game with a joyously conceived world, society and politics, making exploration and conversation with the locals flow like swirling currents. You're unlikely to get lost or lose track of your objectives when such snappy dialogue tumbles out of mouths. There's always a zinging one-liner to give you a sign-posted push in the right direction. Who doesn't want to flirt with a pharmacist for free drugs? Why would you say no to a mission that asks you to retrieve dinosaur robot porn?

Although you're exploring multiple planets and space stations, it's as familiar as the Wasteland or Commonwealth. The Outer Worlds is draped in sci-fi Americana, with a little bit of the Wild West thrown in for good measure. It has its own version of VATS where you slow down time to pinpoint better shots and cause more damage. It has a wealth of perks to choose from, sassy companions who need your help, and romantic dilemmas to get involved with. You will hack, loot, upgrade at benches and sneak past guards who really should be able to spot a party of three knee-crouching like something out of a bad panto. There's even a cute mascot or two to rival Vault Boy. An early part of the main questline has you wrestle with a big moral decision like you're back in Nuketown playing with The Power of the Atom. Todd Howard must be doing his nut in.

Still, while it borrows heavily from Bethesda to the point of someone from the legal department drafting a stern letter, it's also confident in its own strengths. The clear highlight of The Outer Worlds is its dialogue and characters. The locals are quick witted, or drunk and stupid, horny, aggressive, depressed, pissed off, cynical, caustic, hyped up, ignorant, condescending and angry. They're a hoot, and it feels like every branch of conversation spins off into its own drama, tale of revenge, loss or friendship. It's refreshing and noticeable that the world isn't populated by boring white men asking you to do gruff military stuff. One of the first romance options you come across isn't about your personal love interests, but trying to facilitate a get together between two characters admiring each other from afar. It's genuinely sweet, even for a cynical, old, black-hearted bastard like myself. There's a lot more fun to be had spending quality time with the locals than fighting the mercenaries and monsters that lurk outside of town. 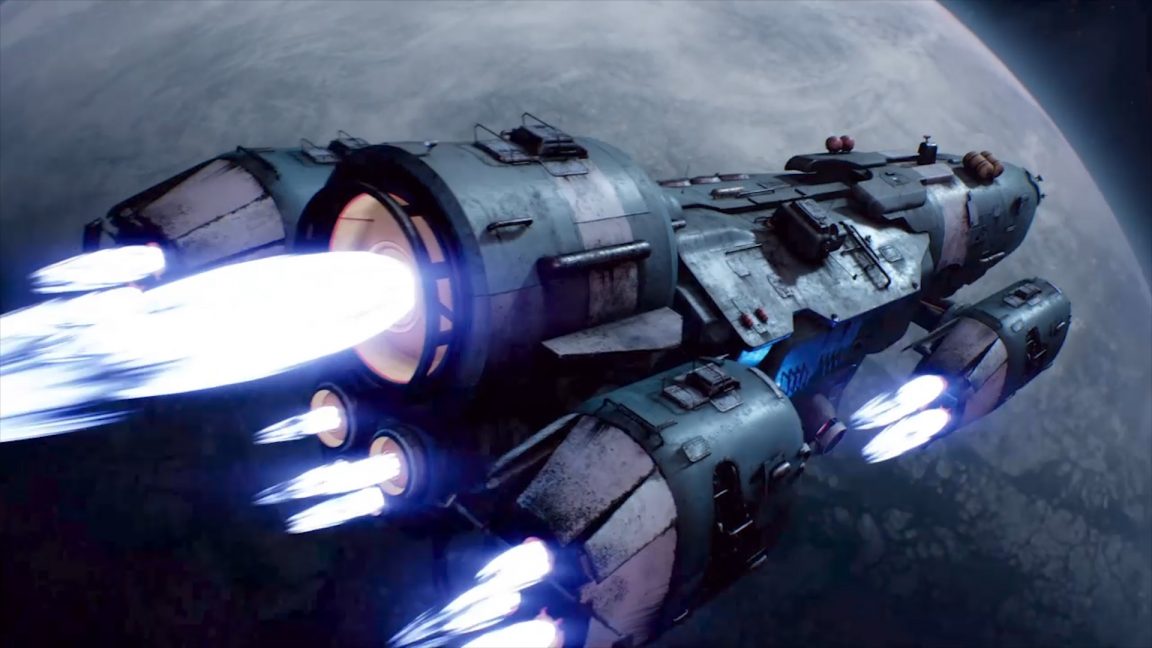 "For those that were disappointed with Fallout 76 going online multiplayer, this is the single-player RPG you've been looking for"

That's not to say combat is bad, but it is flavourless. The Outer Worlds is a better RPG and adventure game than a shooter, so it's a shame that it litters unexplored areas with so many enemies. It can feel like a slog churning through them to get to the next interesting populace. Enemy AI tends to default between charging like a bloke on a Saturday after nine pints, or just floating in the distance spitting venom and bullets at you. Your best approach is either send in your companions to do the dirty work, unload everything you have, or run away. There's also an abundance of cash and ammo on the default settings, which may be an admission that you'll want to blast through combat to get to the better bits. If violence and risk is your thing, tougher difficulties will make your companions mortal. But again, I'd rather try a second playthrough with a different attitude and stats than simply making combat harder.

And while it borrows from the best, it doesn't stretch itself or risk innovation. The Outer Worlds never goes too deep in any one direction. Sure, you can upgrade and tinker with your stats, but you'll never get lost in the system or fall down a rabbit hole to really refine your character build. There's a neat little flaw system in play that adapts to your style; if you get your ass kicked by a lot of robots, for example, you can choose to accept a phobia and weakened stats in exchange for an extra perk. It's a shame then that perks are so functional. They may help you carry more, or do more damage, but there's little of the inventiveness of Fallout's vampire Hematophage perk, or the Mysterious Stranger. That feels like a missed opportunity in a game brimming with wit, but maybe it's something that would develop for a sequel. It also commits a few basic RPG sins we thought were on their way to the bin in 2019, such as forcing you to choose stats before you've barely played the game. But when it's hitting you with good gags at character creation with all the perky confidence of a Barden Bella on enrollment day, it's a niggle you can forgive quite easily. 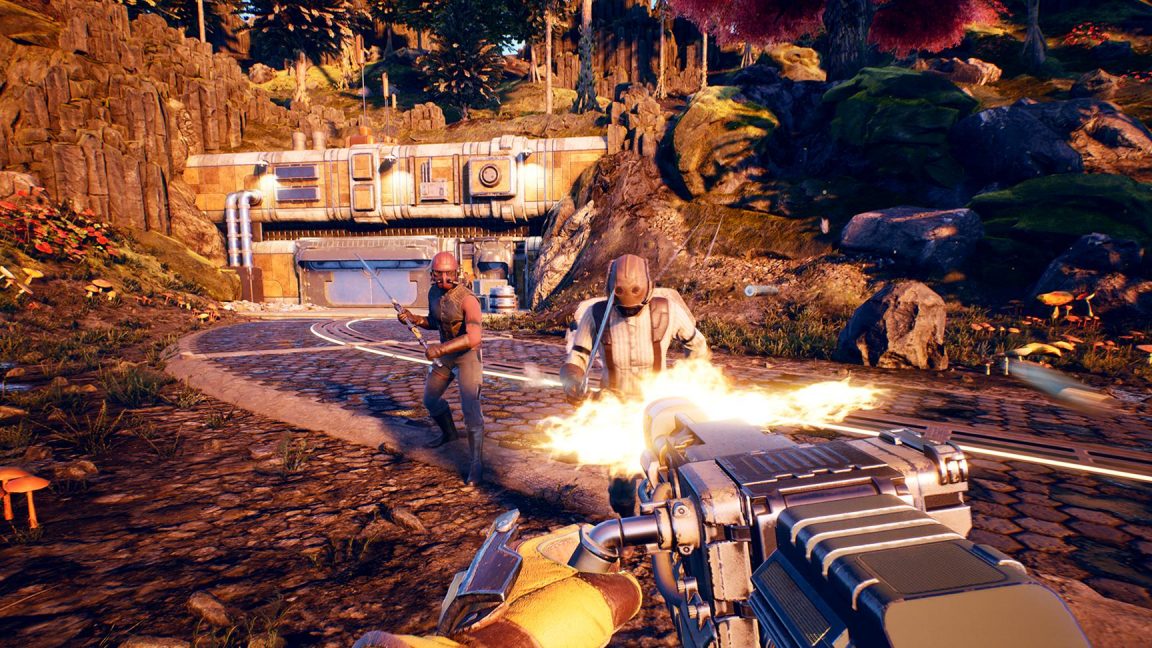 It doesn't feel right to praise a game for not having ugly or game-breaking bugs, but it's something we associate with this genre of sprawling single-player RPG. In The Outer Worlds' case then, Bethesda should really take note. Aside from some basic pop-up entering larger areas, I've come across no evidence of weird graphical glitches, busted questlines, disappearing items, weird animations or any of the other sloppiness we've become used to in recent Fallout games. Congratulations on not being broken, The Outer Worlds. That said, this is a much less physical world than Bethesda’s, which are usually littered with props that the game has to remember the location of. Most of The Outer Worlds’ items exist in menus.

I usually play these games with a build that errs on the side of violence when it comes down to it. I'm happy to play with a nasty attitude and blunder through killing and insulting people if I think there's more in it for me. But The Outer Worlds had me considering my violent acts, pulling me back from the brink on a number of occasions when I thought I'd already made my mind up how to deal with a situation. That's a testament to the great writing and characterisation, and it's this that The Outer Worlds should be celebrated for above all else.

The Outer Worlds serves a need and fills a gap very neatly at the end of this console generation. The charm of The Outer Worlds lends itself to water-cooler tales and other moments to share, and certainly more than one playthrough adopting alternative styles. It's safe, but very welcoming. I can even see it developing into sequels if Microsoft chooses to support it and the fans embrace it, which I have no doubt will happen - some games are just made to cosplay. For those that were disappointed with Fallout 76 going online multiplayer, this is the single-player RPG you've been looking for. If you're hankering for somewhere you can while away the hours talking shit, chuckling and prodding at the locals, you won't be disappointed.