Early on in my time with the Mortal Shell preview build, I took a side path that led me to my first NPC: a vendor. To his right was a cat. I approached expecting a ‘pet’ option, and I got one.

I eagerly pressed the button, and a brief petting animation followed. The cat recoiled a bit when it spotted my character’s hand approaching, before it settled in, accepting my loving gesture and enjoying the stroke. Somehow, in that moment, it hit me: cats in video games rarely behave like cats. You can pet cats in Red Dead Redemption 2 and Assassin’s Creed, sure. When you hit the button, your character leans in and the cat quickly syncs into its petting position, as if stopping at some invisible stage marker. We all know cats are rarely friendly to strangers, but we suspend our disbelief and appreciate the time developers took to craft what’s ultimately a trivial moment.

I bring this up because I like to think the time the small team at Mortal Shell developer Cold Symmetry took to craft this moment, the attention it was paid, is emblematic of the team’s approach to designing the rest of the game. Mortal Shell is a Souls-like action RPG. It has weighty animations, stamina-based combat, and it oscillates between challenging and outright mean. If you love FromSoft’s work as much as I do, you’ll have no doubt played dozens of these. But this one is different.

At a basic level, Mortal Shell is what happens when you slow down the pace of the original Dark Souls, from visibly slower swings and thrusts to areas that want you to navigate them like you do the corridors of a tactical shooter: slicing the pie, slowly rounding every corner and never assuming it’s clear until your feet drags the ragdolls of enemies as you walk over them. To call it Slow Souls would be accurate, if wholly reductive. Mortal Shell is so much more. What sets it apart from the rest are the unique mechanics it introduces, and how it uses them to play with genre staples.

You start out as a faceless husk, one hit away from death. You can attack, sprint and perform pretty much all the typical actions in a Souls-like, but you’ll quickly realise how vulnerable you are in that form. It’s essentially like playing Dark Souls with the minuscule starting health without ever levelling up. Things get interesting when you embody a Shell. The build I played had two of the planned four, and each was unique in the opportunities it offered and in how it dictated the moment-to-moment.

The first, Harros the Vassal, might as well be Dark Souls Poster Guy. It’s got heavy medieval armour, slowly swings weapons and fat-rolls everywhere. You can side step with a hit of the dodge button, and double-tapping it performs a full roll. Standard. The other is Tiel the Acolyte. It starts out with almost double the amount of stamina, but a little less HP. Its dodge is a teleport, not unlike what the Old Hunter Bone does in Bloodborne. Having access to such a vast pool of stamina makes mixing dodges in with attacks a breeze, and Tiel’s lighter frame compared to Harros’ helps you avoid attacks you would otherwise have to tank.

But that’s only the beginning. When you first embody a Shell, you gain their inherent stats and distinct look, but you don’t quite know the extent of their abilities. Mortal Shell doesn’t have a traditional skill tree, or stats you can min-max. Shells are, in essence, pre-made classes. In order to explore the potential for each Shell, you must first get to know them. This acts as both a mechanical and narrative hook. As you play, you collect two resources: Tar (Souls) and Glimpse (Insight). The two can be used to unlock abilities that each represents a chapter in their story. The very first reveals their name, and each one after that fills a gap in their history.

The few abilities in the build were all passives. Things like a chance to redirect damage to stamina, damage bonuses in certain situations and the like. Whether or not you decide to embody a Shell, your main defensive ability – outside of dodging – is Hardening. It has a generous cooldown, and it does exactly what you think: hardens your body, turning you to stone for a brief few seconds. Hardening breaks when an enemy’s attack connects, or when the timer runs out.

Hardening is Mortal Shell’s block button, though not as readily available. It can be more versatile, depending on how you use it. I found it very useful when used at the end of a roll when I failed to create enough space. It’s also great in interrupting enemy attack chains, and in saving your butt when you flub a parry and see the attack coming. 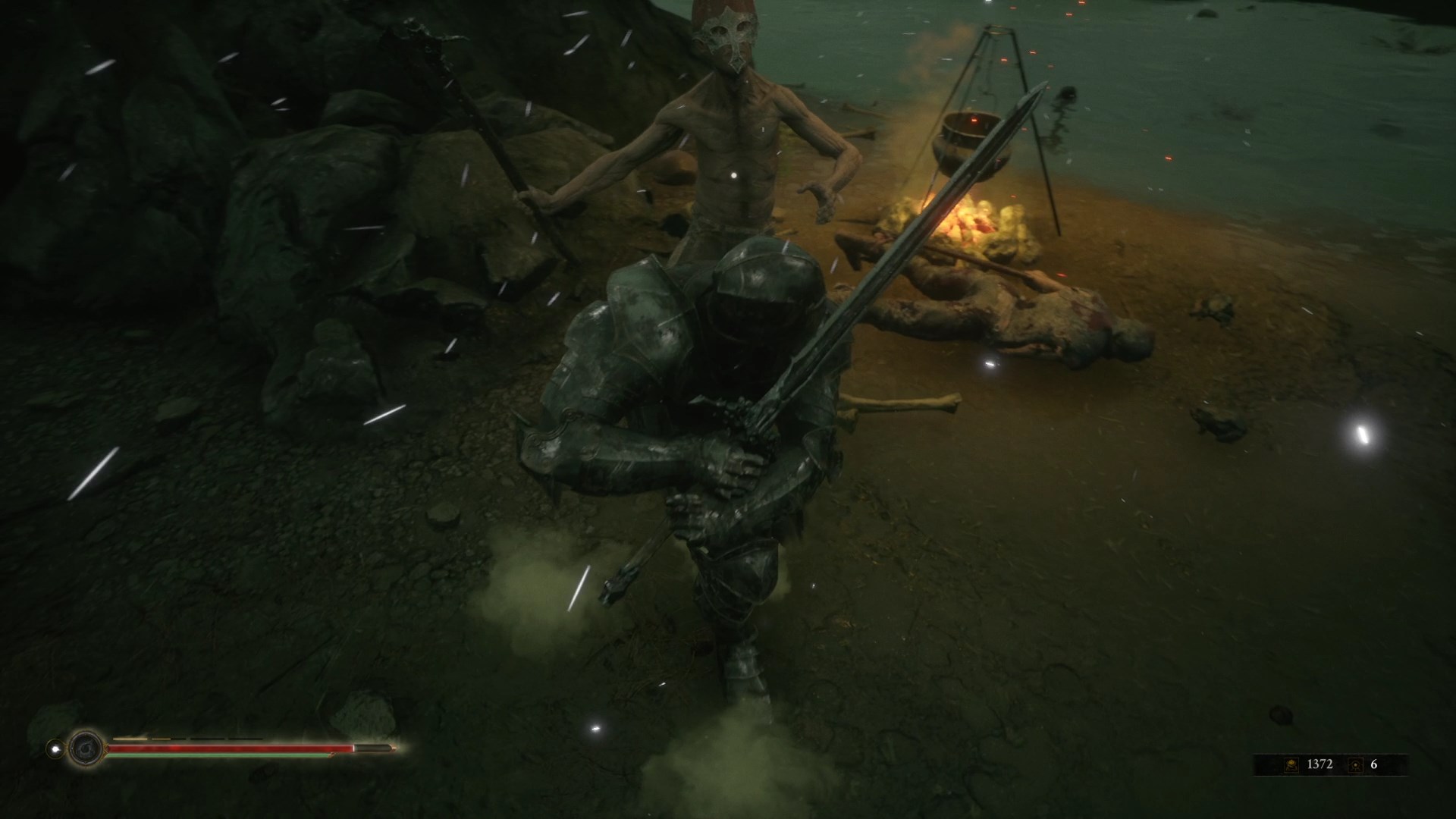 Parrying is another interesting component in Mortal Shell’s combat. You build up Resolve by landing hits, and this resource can either be used to unleash powerful attacks, or leach some HP off enemies on a successful parry. The parry animation’s wind up prevents it from getting spammed like you could in, say, Sekiro. Usually, I’d fault the game for having such a slow parry. Over time, however, I learned to appreciate it.

For one, enemy attacks are appropriately slow that you could conceivably, consistently parry them. Some are faster than others, of course, and a few are best avoided entirely. Assuming you have enough Resolve and you manage to get the timing right, you’ll be rewarded with a decent chunk of HP. Even out of Resolve, a parry will still stagger your enemy long enough for a free hit or two. This Resolve-parry-leech dynamic is brilliant. Even in desperate moments, the game affords you the opportunity to regain control. If you play it safe - get one hit in and roll away - you’ll build up your Resolve over time, so long as you don’t wait too long between attacks.

This interplay also helps make the combat dance work without relying on an ever-present source of healing. This may be different in the final game, but all the healing items in the demo were finite. I could definitely see situations where multiple desperate runs deplete your entire stock and force you to be very careful going forward. I still think an Estus-style renewable healing item is the way to go, but it’s hard to judge the bigger picture there from such a limited demo.

Though the demo had little content, I came across a good number of unique items. Mortal Shell borrows from rogue-lites in that it forces you to use each item once in order to learn their use. I couldn’t really see a compelling reason behind that. It made things unnecessarily challenging. Frustratingly, a type of healing mushroom in the game has a similar icon to another that induces poison. Imagine hitting the latter mid-fight, only to see your HP slowly deplete when you wanted to boost it. I could do without the lengthy animation that plays every time you bring up the inventory screen, too.

The two areas I accessed each offered a different experience. The first was an open marshland with a couple of divergent paths, patrolling enemies and stationery rangers. Look around and you can spot hidden chests and even a mini-boss. The other is a straight up dungeon, where tiny corridors and dark corners are the theme. I found better luck with the lighter Shell there, given its abundance of stamina.

There does appear to be a bit of an emphasis on traps and ambushes throughout, which I worry could become a problem later. In my experience, too many of those and players either slow their pace to a crawl, or just run past everything – neither option is interesting. There was no concept of a bonfire in the demo, and the two areas felt stitched together out of order, so I can’t really judge how they all fit into the overall progression, or what type of checkpoints the final game is going to have. 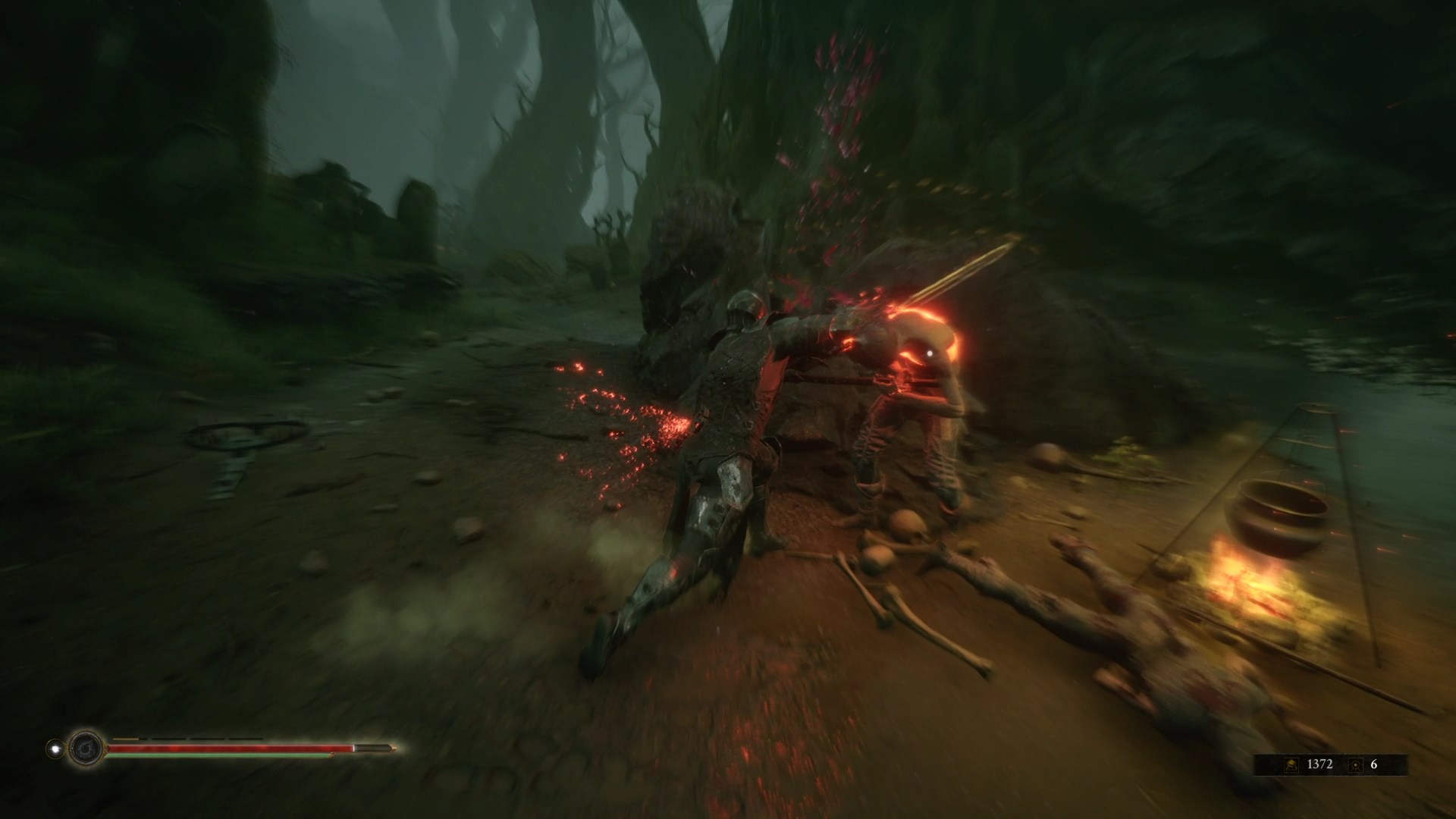 What I did spend some time with was switching between the different classes in combat. Assuming you find each effigy, you can use it once per life to spawn as the Shell it represents. The demo had an area where you could change Shells, which effectively means you can tactically “plant” a Shell by dying, start out with a different one, then embody your old Shell.

I wish there was more than combat on display here, but what I played nonetheless left me very excited about Mortal Shell. I still have so many questions about build variety, level design, playstyles and the extent to which the game relies on class-switching. I also want to see how the different weapons will play – the demo had only one!

My biggest worry right now, though, is general animation polish. One of the hurdles early on was getting used to how slow animations are. Everything from rolling to swinging a weapon has lengthy starts and windups to their animations. Even at 60fps, rolling and recovery felt perceptibly clunky. Like I mentioned, it’s nothing you can’t get used to, but I’d love to see them smoothed out come launch.

Outside of that, the demo hits all the right notes, and tells me Mortal Shell is going to be among the best of the subgenre, and one for Souls fans to watch.