Konami has smashed profits out of the park for the second year in a row.

Say what you will about Konami’s post-Kojima reputation, but the Japanese publisher isn’t struggling for air. The firm’s annual financial results revealed that operating profits are at record highs for the second year running, climbing 11.8%. 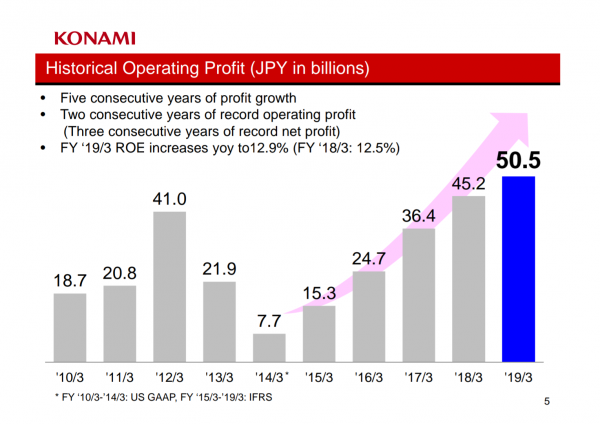 This also marks the fifth consecutive year of profit growth after taking a dive back in 2014. Not a fantastic period for Konami, it would probably admit.

The breakdown showed digital entertainment - ie, video games - dominated Konami’s year, outperforming all other sectors with a little over half of the total revenue. That includes beating the confusingly-named gaming and systems, Konami’s infamous pachinko and wider gambling operation.

Konami is looking at the hat-trick in 2020, with forecasts suggesting another record-breaker. There’s nothing ground-shattering planned for PC, besides another round of sports and more retro anthologies for Castlevania, Contra and Arcade Classics.

But it if ain't broke, right?