Square Enix take yet another swing at a Final Fantasy movie, but this one is strictly for fans.

I actually quite like Final Fantasy: The Spirits Within. The technology wasn't yet there and I think that's what drove audiences away, but it has a great cast (Alec Baldwin, Ving Rhames, Steve Buscemi et al) and steers clear of obvious FF references and tropes but still features themes that are true to the series at the time. I think it gets unfair flak. It's unremarkable, but uncanny CG aside I think it's perfectly serviceable as a boiler-plate, standard-issue summer blockbuster.

"Don't mistake it: this is essentially one great big piece of marketing for FF15, but it's effective in hitting that target."

Final Fantasy 7: Advent Children is another matter. It's the opposite of The Spirits Within, crammed with fan service to make the FF devoted coo, but it's not a great piece of film making and has a script that I feel actually undermines much of FF7. The extended version is a bit better, but yeah: Advent Children's not so hot. Nice fight scenes though, and the character of Tifa came out of it bolstered even if nobody else did.

"The visuals are utterly gorgeous. Wide shots of the city of Insomnia do a great job of building up a location that I hope we get to explore at least a bit during the game."

Kingsglaive has elements of both its predecessors. There's fan service for long-time FF fans and plenty of recognizable elements from FF15, but given that the game isn't out yet it also needs to stand on its own. There's a level of restraint that Advent Children lacked, especially in the way it builds its world early on.

The film takes place parallel to FF15's opening. While Noctis and his friends are on their road trip, invading forces encroach on his kingdom's territory. The Kingsglaive are a group of elite soldiers that answer to his father, the king, and it's the tale of their fight. Anyone who's seen a trailer for the game knows the outcome: the city falls. This tells us how it does so, fills in the motivations of the invaders, and reveals who survives.

Don't mistake it: this is essentially one great big piece of marketing for FF15, but it's effective in hitting that target. It showcases the world view of FF15 well, but it's surprising how disconnected from the game the movie feels. It's additive rather than necessary.

The visuals are utterly gorgeous. Wide shots of the city of Insomnia do a great job of building up a location that I hope we get to explore at least a bit during the game. There's a great Midgar-like vibe to some of the slummier areas we briefly see. It makes me want to see more of this place in the game. 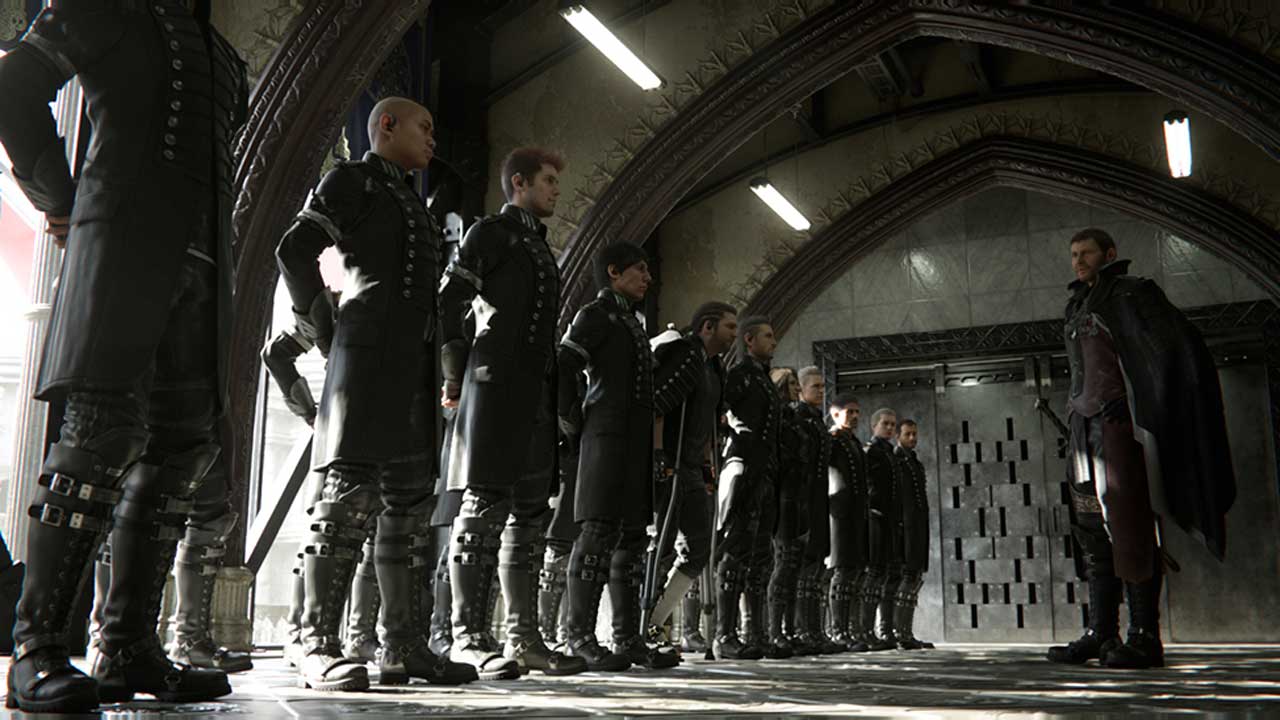 Where the film stumbles is often due to technology: the world looks incredible, but there's something off about the movement of lips or in some darker scenes how faces are lit. We're 15 years removed from The Spirits Within but that ghost still lurks, and Kingsglaive actually fares a little worse than Advent Children here thanks to its more realistic look.

The film shows surprising restraint after its action-packed opening and is a slow burn. This is where it's at its best. You know an invasion is coming and the sense of tension is palpable, enhanced by an excellent musical score. In the back half the film shelves that tension to make action the focus. It looks pretty, but so much of that action feels hollow from a storytelling perspective. Style, yes. Substance - not so much.

There's echoes of what this would be if not for CG in its dialogue and structure; an anime movie. Some characters feel a little too cute, and Nyx becomes surprisingly quippy despite how dire his situation is. There's lots of jabbing back and forth about who the 'Hero' is, and at one point in a perfectly emotional moment a character decides to sob out some jarring backstory that really doesn't belong. The story is generally a little muddled, and I still don't understand some of its finer points.

A lot of that is down to poor dialogue, but the talent among the cast do a fine job working with such material. The highlights end up the most famous trio - Sean Bean, Aaron Paul and Lena Headey - but the entire cast does admirably.

Like Advent Children there's also a feeling to the editing that feels more game cutscene than movie. There is a subtle difference if you really pay attention, and it underlines how far we still have to come as an industry in that regard. The animation is stunning, but how it's edited is less so.

As a commercial for FF15 Kingsglaive still works fantastically. You meet a few of its key cast (in particular its villains), and Nyx wields a lot of the same abilities the player will during the game. On top of that if you know anything about FF there's fan service galore.

This is a film that essentially culminates in a kaiju battle between Diamond Weapon and some of the Knights of the Round - both iconic staples of FF7. Beloved FF6 antagonist Ultros also makes an appearance in a far more beastly form. These are the obvious things, but there's far subtler nods throughout too, and that's very welcome indeed.

"It feels like for fans in particular for every rocky area of Kingsglaive there's something equally exciting and fun offered in exchange."

It feels like for fans in particular for every rocky area of Kingsglaive there's something equally exciting and fun offered in exchange. For every time the lip-sync or eyes begin to look a bit uncanny there's another moment of astonishingly realistic CG or impressive fighting. For every bit of dud dialogue there's another piece of fun fan service or world building for FF15 proper.

So, yes, much of the film is clunky. I can see where that critical mauling and 8% Rotten Tomatoes rating comes from. If I was writing this divorced from the context of FF15 I'd be much harsher. It's convoluted and confusing and features strange directorial choices... but that doesn't really matter for the target audience for this film.

It's for FF fans, or lapsed fans, or people unsure about what FF15 has to offer who want to dip a toe into its world. For all these people Kingsglaive is excellent, and I feel it's a movie that stands on its own merits beyond nostalgia far more than Advent Children did. I'm a big old FF nerd as many of you know, and while the film certainly outstayed its welcome towards the end I enjoyed it a lot - I left it more interested in the world of FF15 than when I entered.

If you go into Kingsglaive with the understanding that it's a fairly simple-minded action flick with beautiful CG visuals you'll likely come out a little confused by the plot but also quite satisfied, as I did. There's a good chance it'll also make you more interested in Final Fantasy 15 - and that's likely exactly what Square are hoping for. Is Kingsglaive a good stand-alone movie? Well, perhaps not. Is it good at what it's trying to do? Sure thing. Fans will love it.