Given the recent announcement of Half Life: Alyx, this revamped Half Life mod couldn't have come at a better time.

Developed by a modder who goes by the handle Jackathan, In Deep reimagines scrapped areas from the original 1997 Half-Life game. The official description reads as follows:

"In Deep takes you through the scrapped version of Half-Life from 1997, re-imagined and revamped. What awaits you is a surreal, fast-paced, and action-packed journey through the old Labs once again!" 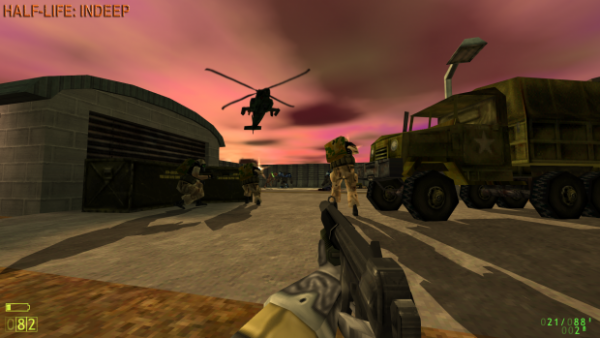 At the moment only a demo is available, which takes place in the Office Warrens section of Half-Life 1 (linked above).  Jackathan notes that this comes from the 0.52 Alpha and was built from the ground up with an emphasis on improving puzzles and the actual experience of playing. They concede that it's not an exact replica of the source material, but it doesn't deviate too much from what the team originally had in mind for designs and layouts.

"I have mostly worked to make the puzzles less mindbendingly awful and the combat more reminiscent of the retail version of the chapter," Jackathan writes.

"In summation, In Deep's Office Warrens is a less linear and somewhat extended version of Office Complex from retail Half-Life," they continue. So if you're looking for a way to scratch your Half-Life itch and have already played Half-Life 2 743 times, In Deep's demo could be the mod for you.

As well as the new demo, you can access an old build of In Deep 0 from 2015, although Jackathan notes that this is in no way representative of how the mod looks today. If you're looking for something a little more in line with contemporary design, keep an eye out on Boneworks, which launches on December 10. It's a VR game that actually gives you arms.

Half-Life: Alyx is launching in March 2020 and requires VR gear to play. Here's why.