Usually you've got hands in VR, but never arms. Boneworks is here to remedy that.

Boneworks is an upcoming VR action-adventure game from Stress Level Zero. We reported on the game's announcement back in March, but here's a refresher to jog you up to speed: you play as a character called Ford who works for a company called Monogon Industries. Obviously shit hits the fan because that's how stories start. It's a game that prides itself on its use of physics. There are shootybangs. 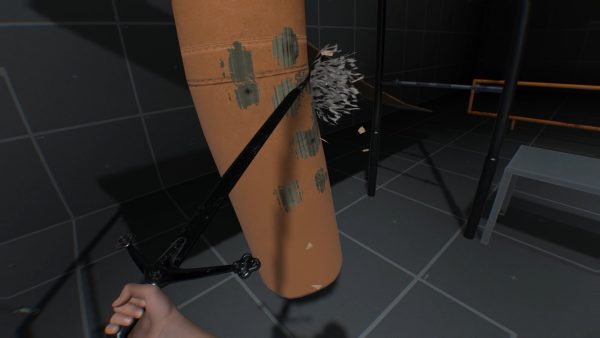 Basically, there's a lot more going on in Boneworks than just having arms, but let's linger on that for a bit because it's actually quite significant. Consider the recent revelation that Valve is working on a new Half Life game, Half Life: Alyx.

A recent article over at PC Gamer made the very important point that if Alyx is to be as good as previous iterations of Half Life, it needs arms. But this isn't the faraway game-changer we thought it might be, because Boneworks has done the impossible and afforded you actual, functional limbs, as opposed to just floating appendages.

Again though, it's not just arms. Boneworks looks like a total revamp of established VR. The most recent gameplay footage shows someone actually stuffing some sort of orange technologically-enhanced humanoid into a big locker. They're called omniprojectors and they're sentient beings created by Monogon for peacekeeping purposes, but you can make the executive decision that they're better suited as locker inhabitants. The whole sequence looks fluid, intuitive, and far more advanced than the majority of VR games in the market at the moment.

Boneworks is launching on Steam on December 10, 2020. If you're excited for Half Life: Alyx, it's probably worth checking Boneworks out to see where VR firmware is at right now. Also, just in case you were wondering, here's why Alyx is VR-exclusive.