Ubisoft has provided details on the For Honor Season Pass.

The Season Pass will add six new Heroes available seven days before they are released to all For Honor all players.

It also includes additional in-game gear and a 30-day Champion Status, which provides players with more experience points and loot.

Additional post-launch content, including new maps, modes and gear, will be available for free to all players as previously reported.

The Season Pass can be purchased alongside the full game or through the Gold Edition - information on which was posted earlier than planned and pulled by Ubisoft in mid-January. 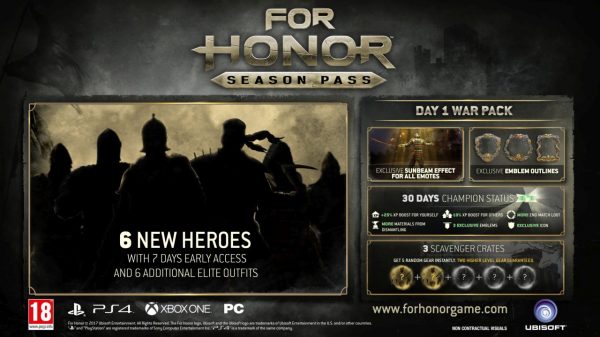 Here's what the For Honor Season Pass includes: 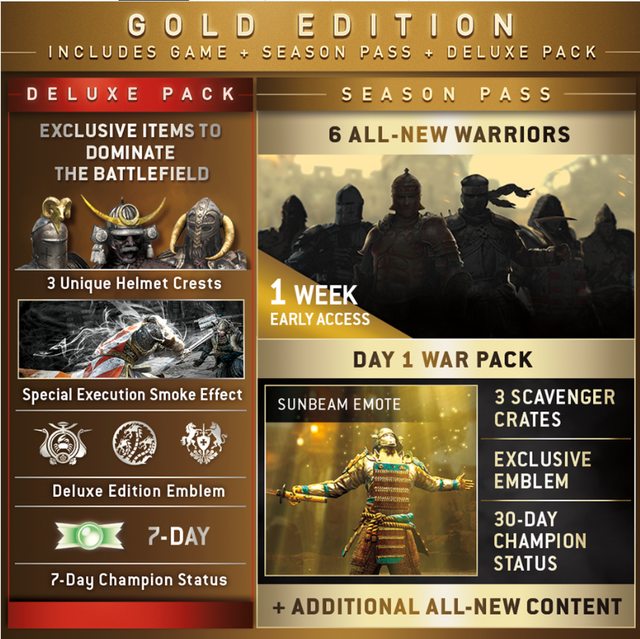 All Season Pass content, except the six post-launch Heroes and their elite outfits, will be available when the game releases later this month.

Ubisoft will add the new Heroes "progressively" in batches of two at the beginning of a new season of the Faction War. After the early-access period for pass holders, the Heroes can be unlocked via the in-game currency Steel.

The additional free content in the plan will be spread out during the three Seasons. Again, it comes with new maps, modes and gear which is free to all players. Season Pass holders just receive early access to some elements is all.

As previously reported, the For Honor open beta will run February 9-12. It includes the 4v4 best of five rounds Elimination mode. The other three modes included in the beta are Dominion, Brawl and Duel along with nine playable Heroes.

For Honor will feature twelve playable Heroes and five different multiplayer modes when it releases on PC, PS4 and Xbox One February 14.