What do you do with a storied series after a success like Fire Emblem: Awakening? To be honest, it always felt like Nintendo and Intelligent Systems were a bit unsure. We got an iterative sequel in Fates and then a remake, Echoes. Both are fine games in their own right, but after playing Three Houses I now can't see them as much more than a stepping stone toward Three Houses, which is a better, more confident and tighter game despite a sprawling scope. 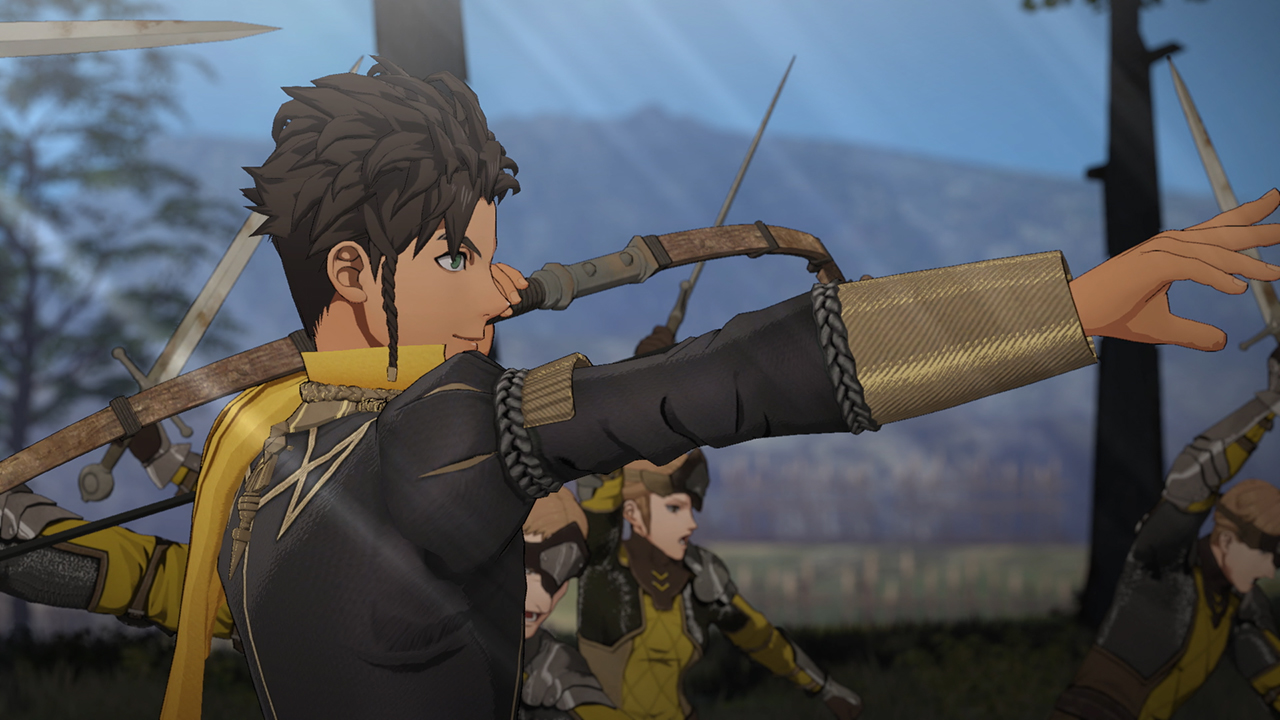 From Fates the game inherits a deep focus on choice. In that game you're forced to choose between two regal families, with each path finding you brutally fighting familiar faces from the other on the battlefield. Here, players must choose between the titular Three Houses. What has been taken from Echoes feels more nebulous, but it is absolutely there - it's a sense of focus and understanding of what Fire Emblem is at its core, something perhaps only obtainable by returning to one of the oldest titles in the series.

If you're not familiar, Fire Emblem is at heart a strategy game. Think XCOM, Disgaea or Final Fantasy Tactics - grid-based, isometric battles with a focus on strategy, with character progression and growth influencing your available skill set. Three Houses is still this, but rather than a motoring story that shuffles you from battle to battle, this entry breaks it up with a hub zone that's probably best thought of as being like Mass Effect's Normandy or Dragon Age's Skyhold - a home for you and your elite squad of fighters, and a place where you can not only prepare for the next battle but also enjoy downtime getting to know your allies better.

That zone is the monastery, a school and religious hub that sits in a sort of neutral zone between the three major powers in the region. It's Hogwarts for the nobles of Fire Emblem's world - in fact, the three heirs to the three nations surrounding the monastery all attend it. Each is the head of one of the school's houses, and the school is preparing them for life as a head of state. On some days they'll grind away in the classroom, while on others they'll head out to battle troublesome bandits out in the wilds. The player takes on the role of Byleth, one of the teachers at the monastery.

The result is an incredibly smart addition to Fire Emblem. This series has always tried to endear its characters to the player, hopeful that you'll be crushed if one is downed in battle with the permanent death option flicked on (as it should be), but Three Houses takes that commitment to another level. In a sense it's part Persona, with the agonizing choice of what to do with the limited free time on school days determining a lot about how your story proceeds. 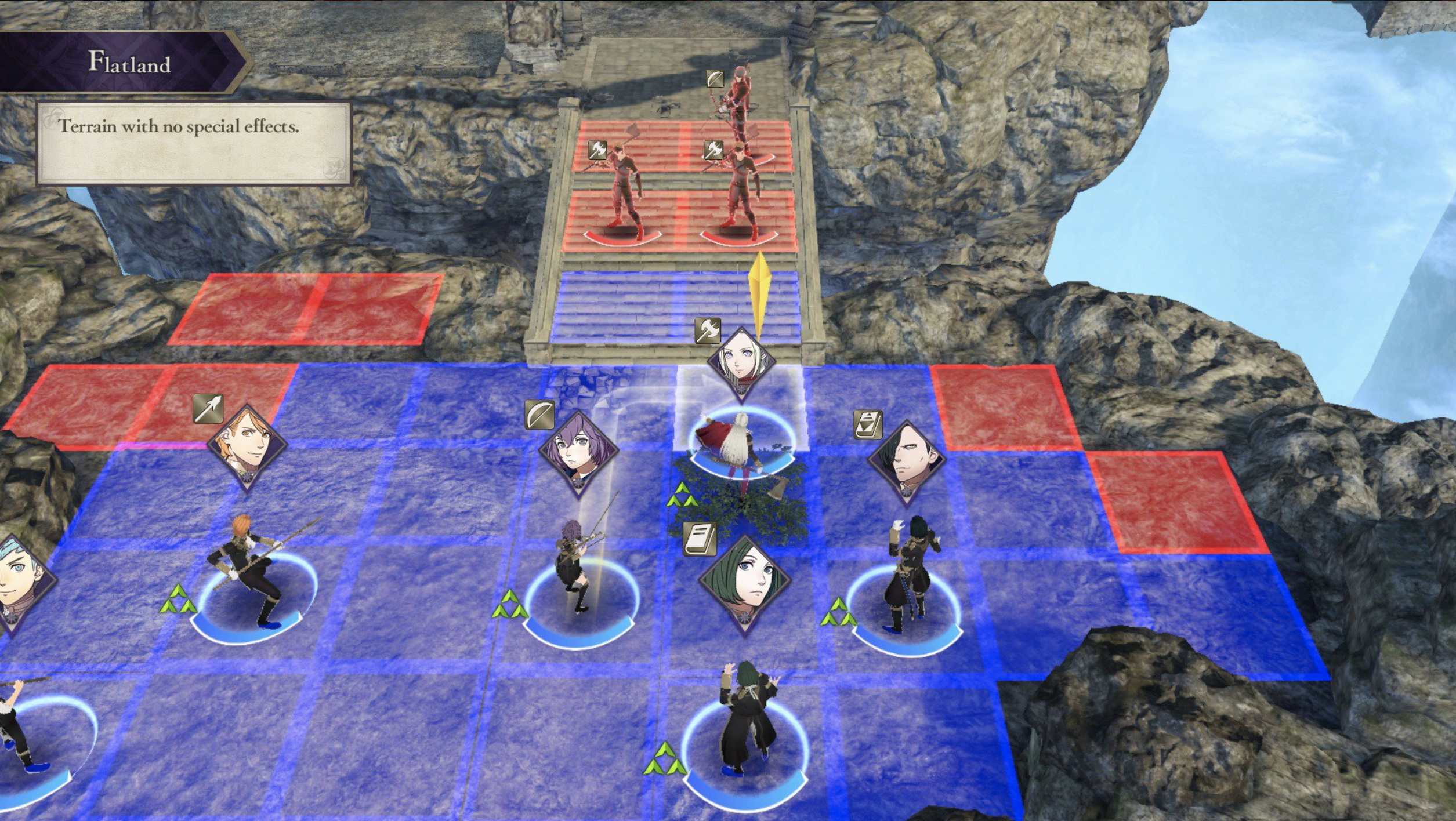 The monastery is a full 3D area you can poke around and explore, and all the RPG tropes are here to indulge in. You can fish at the pond, cultivate crops at the greenhouse or simply head to the marketplace to get ingredients that can be cooked to share with squadmates. You can train with more experienced teachers to boost your skills. The godly might want to head to the cathedral to join the school choir. Most importantly, you can spend time just walking around, exploring and getting to know the other students - some of whom will be allies in the future - and others less so.

So, yes, there's a big choice. You must choose between the Three Houses - Edelgard and the Black Eagles, Claude and the Leicester Alliance, or Dimitri and his Blue Lions. At school this is a friendly rivalry - you're simply choosing which students you'd like most to tutor - but it's not a major spoiler to say that eventually your school days will come to an end. As real life and the pressures of leading their country comes about, new sides of each of the trio will be revealed and friendships will be tested. Battle lines will be drawn, and, well, this is a series about going to war. You can probably guess where it's all going.

Except it won't quite go where you're thinking for everyone. Or even for you. Fire Emblem: Three Houses is absolutely ram packed with choice, and so while fans have been eagerly speculating about the differences between the three story paths for the three houses, I can gleefully but vaguely say that there's quite a bit more to it than that. There are twists and choices within each path that will seriously shake its events, and there might even be more paths than the game initially makes clear. There's a lot going on. It should take you anywhere between 40 to 80 hours to finish one 'path' in Three Houses (there's lots of side stuff), but completionists will be able to use a generous new game plus to see the content of other routes through the story in around half that. 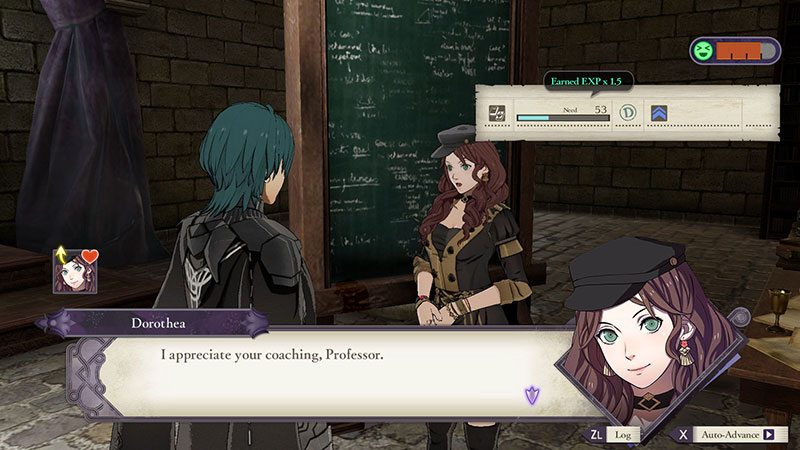 Some changes are more subtle. When you pick a house you'll have access to their class members, but it's also possible to poach and recruit members of other houses to yours by meeting certain requirements. This doesn't just unlock their potential as a unit, but also socialization and inter-character relationships concerning that person. Seeing all of this feels nigh-impossible - but that holds a charm in itself.

Your journey will be uniquely yours, and a predictable overarching narrative is helped along firmly by those little touches. Fire Emblem: Three Houses is replete with great world-building even with the actual story fumbles from time to time, and the presentation, charming localized and voiced, should leave you well invested.

Fire Emblem's combat has always been brilliant and satisfying, and in truth not much has changed about it in Three Houses. Instead, the game is bolstered and lifted up by this new, deeper RPG side of the game. It has all the charm of previous Fire Emblem entries, but a choice-driven, open-ended feel that makes it somehow resemble Persona. At the same time, the rigid elements of the academy structure fit with the general mood of Fire Emblem perfectly - this is professional, not scrappy, so units are taking exams in order to change class and use different skill sets, or working hard in extracurricular activities to raise lacking stats.

There are a few notable changes in battles such as the addition of battalions, which lets units command an entire squad of soldiers rather than just fight alone. When a bunch of characters have battalions equipped this adds a new tactical facet thanks to the battalion abilities but also changes the look of battles - suddenly there are actually significant numbers on screen when zoomed all the way in. Indeed, it's here that the development assistance of Koei Tecmo, best known for Dynasty Warriors, is most obvious. 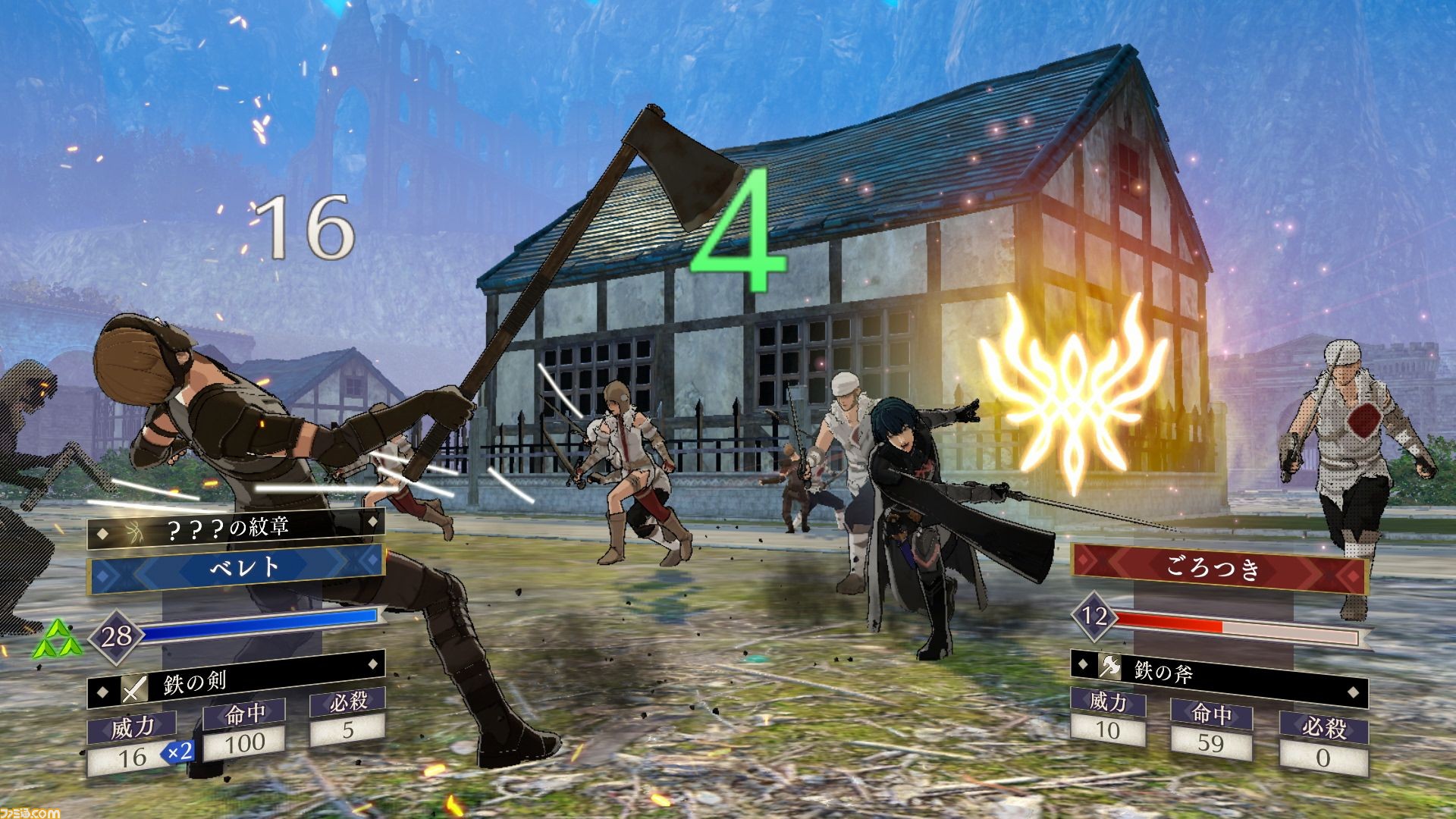 I'd be lying if I said this always looked good, however - sometimes the 3D battle scenes reveal low-quality textures and low-poly grunt soldiers shuffling around in an uncanny way. Occasionally the game looks outright bad, only carried by a solid art style. This is all especially true in docked mode, though it does little to dent the general charm of the experience.

Fighting is still brilliant, anyway. You'll be hiding archers and mages behind melee powerhouses, using mounted units to flank, triggering battlefield effects and considering the placement of every character on every turn, since character relationships outside of battle impact their performance in battle. Two friends will fight harder if they're next to each other, for instance - so it's not just about equipping the best gear before the battle and then muddling through it. Every turn matters.

The criticisms I can level at Fire Emblem: Three Houses are few and far between. There's the previously-mentioned visual struggles and problems with feature bloat and pacing. While the world building is top notch, this game's story and characters once again aren't quite up there with the series' best. In truth these are relatively minor complaints however, and they pale in comparison to the charm that this game just oozes. Countless little touches left a smile on my face, like how the school bell plays out the first few notes of the Fire Emblem theme, or how every RPG class has unique clothing so that class changes aren't just about stats and move sets. There's a lot to love.

Whatever path you choose, Fire Emblem: Three Houses is an absolute blast. It's the best Fire Emblem title since Awakening, and it goes straight onto my list of must-play Switch games.