During the amusement park chapter of Nier Automata, Yorha androids 2B and 9S get a taste of a whimsical world far removed from the desolate wasteland earth has become. Fireworks paint the night sky with rainbow hues as machine lifeforms, the androids' sworn enemies, don extravagant garb. "Let's dance, let's play," the machines insist, extending an invitation to all would-be foes to join in the festivities. The androids are apprehensive accepting the offer, though, because, in their world, pleasantries are often a veneer for existential dread on what it means to be human.

I've been similarly anxious while playing Yorha: Dark Apocalypse, Final Fantasy 14's tip of the cap to Nier: Automata. Sure, I'd love to just gleefully revel in all the clever references that my favorite MMORPG makes about my favorite action RPG. Yet, as a Nier fan, I crave the Lynchian nightmare fuel and complex characters that come with the moniker. So far, Yorha: Dark Apocalypse is a lot like the amusement park in that it retains a celebratory spirit, but there's little thoughtful storytelling billowing below the surface.

So what exactly are the scantily clad androids and infantile robots of Nier: Automata doing mingling with chocobos, anyway? Shadowbringers, the latest expansion for Final Fantasy 14 that was released back in June, comes a new Alliance Raid series. These are 24-player group dungeons where folks work together to overcome powerful enemies, obtain fancy loot, and experience a unique storyline. With each expansion, Final Fantasy 14's development team invites a guest creator to design and write an Alliance Raid. This time, Yoko Taro, the eccentric genius behind Nier and Drakengard, answered the call. Every piece was in motion for the futuristic machine war of Nier and the spellbinding lands of Final Fantasy 14 to collide in Yorha: Dark Apocalypse.

A single step into the Ruined Factory, the first raid wing of Yorha: Dark Apocalypse, was enough to send me into a damn giggle-fit. Industrial wind-worn scaffolding is barely held together, ready to buckle at any moment. Contorted bodies of androids and machines litter the earth, their faces still brandishing the anguish they felt upon death. All the while, a Keiichi Okabe composed sirensong begs me to trudge further into the ruins. Yup, this is the Nier aesthetic, alright. That distinctive rust-tinged flavor of melancholy that's somehow able to make pain seem beautiful. My snickering is only out of sheer nervous elation because I never dreamed of returning to this world, especially not through the filter of Final Fantasy 14. 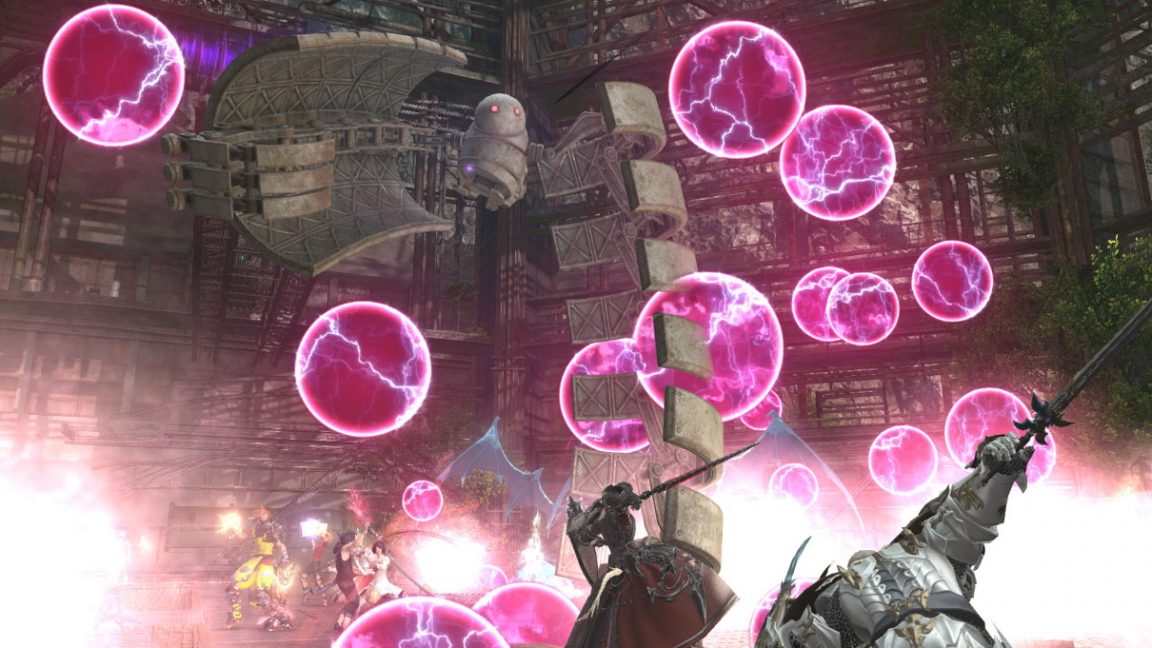 "Who's going to find out what's in here? Us!" barks Anogg, one half of the scrappy dwarf duo Anogg and Konogg, my actually-from-Final-Fantasy-14 compatriots wanting to figure out what this factory even is. The other member of our excavation team is 2P, a totally-not-from-Final-Fantasy-14 combat android that's just a wicked white pallet swap off from 2B herself. Before there's a chance to ask where she's from or why a literal hole in the ground leads to Nier: Automata, we're rudely interrupted, so explanations will have to wait. A beefed-up Small Stubby with mechanical tendrils for arms is waiting for us at the end of the catwalk.

The eloquently dubbed Serial-jointed Command Model is the first boss of the raid and a footnote to how much work went into recreating the epic, bullet-hell laden encounters of Nier: Automata within Final Fantasy 14's framework. I felt that cohesion upon kissing the pavement when the boss unleashed a torrent of explosive projectiles towards the raid group. These are the same swirling death-balls that you have to dodge in the source material, this time, though, action-bar based combat and large area-of-effect (AOE) markers substitute Nier: Automata's fast-paced gameplay. And, you know, 23 other people are fighting alongside you. 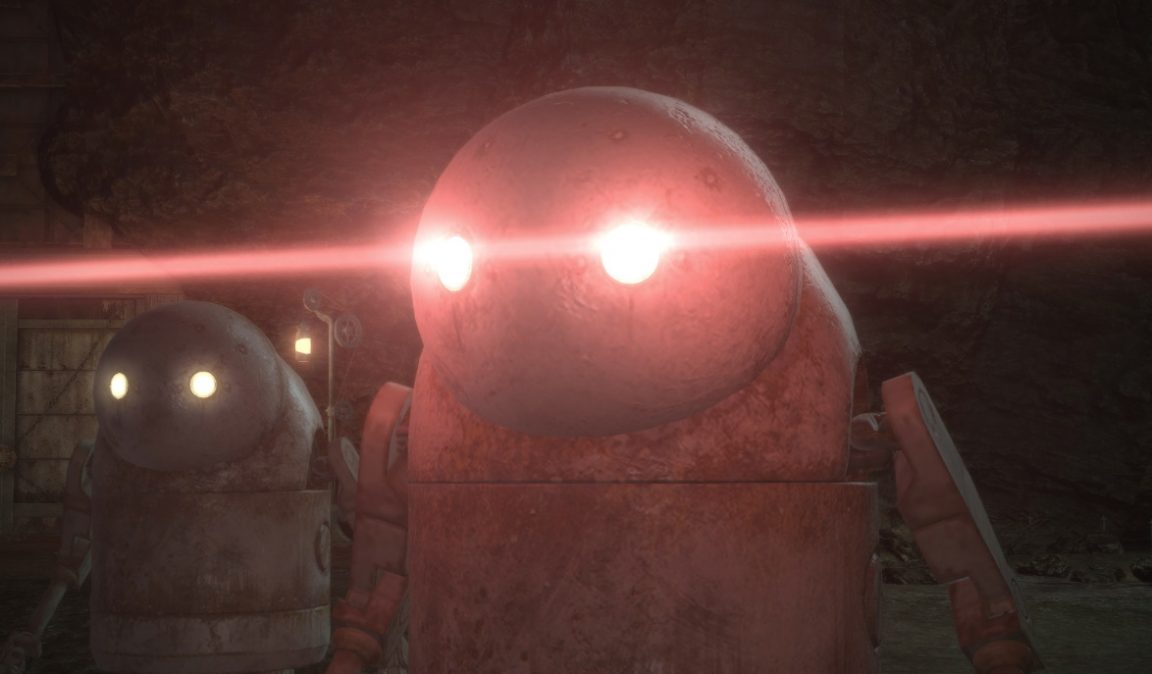 Despite the changes in perspective and mechanical intricacies, though, Yorha: Dark Apocalypse feels more authentic than my preconceived notions led me to believe. Flying Small Stubbies will move about the arena, carpet-bombing with death-balls of their own while the boss supercharges various lasers, vaporising any poor sod caught on the receiving end. It's frantic as hell, and very much in line with the manic pace Nier: Automata is known for. My first clear of the fight came only after the raid-wide realisation that watching the boss' body language for offensive telegraphs was the only way we were going to make it through this.

Yorha: Dark Apocalypse ups the combat ante from there, to the point where it's perched atop the shoulders of an Engel, the mechanical gargantuan from Nier: Automata. This boss answers an age-old question that's been plaguing Final Fantasy 14's raiding scene for years: what would it be like to fight a fucking skyscraper? Whether Engel sets the arena ablaze with a missile barrage or tries to squash the whole raid party into jelly with its locomotive-sides arms, this titan will make you work for your meal. The encounter is at its zenith when Engel summons three groups of machine lifeforms to do its bidding, and a mysterious timer starts ticking down. Being a tank, I bolted up and grabbed one group for myself, working in tandem with two other tanks to split the machines up while the rest of the raid burnt them down. This segment of the fight acts as a DPS check, and if the raid fails to kill these buggers before time is up, then Engel fires off a massive AOE that kills everyone. It's astounding how these battles manage to be as mechanically interesting as they are faithful to the source material. 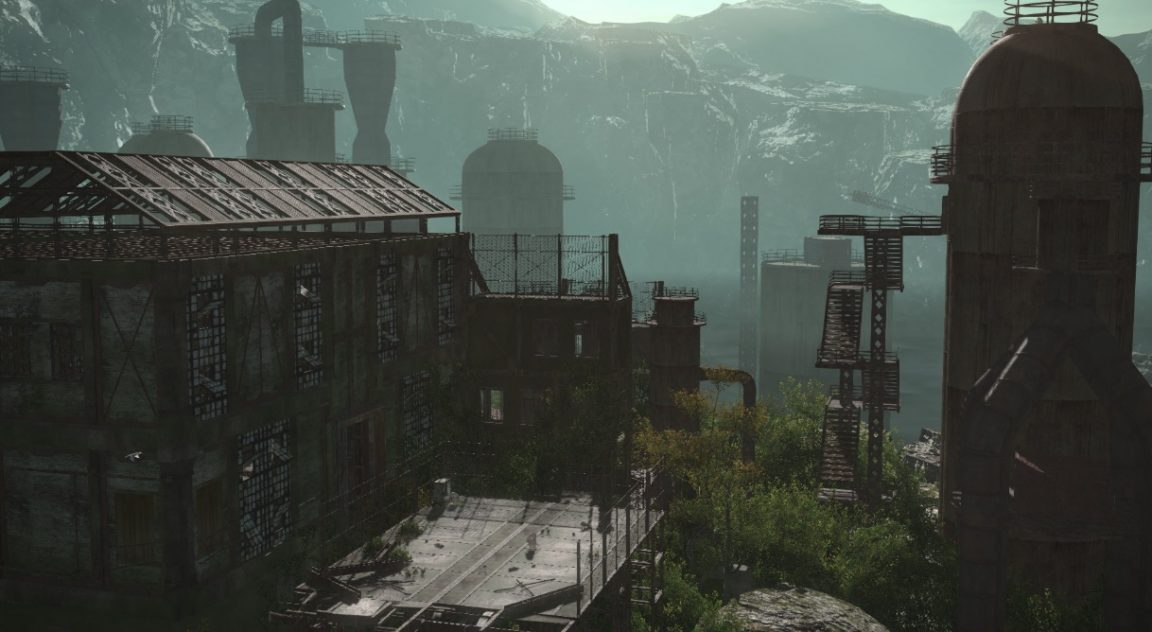 After we finished Engel though, concern began to build in the pit of my stomach. The Ruined Factory goes real heavy on the nostalgia without adding much meaningful, original story content to Yorha: Dark Apocalypse's narrative, and I'm not convinced that's a good thing. All of the throwbacks to Nier: Automata are brilliant - what self-respecting NieR fan wouldn't love gliding about, dangling from the pincers of a Pod as Alien Manifestation blares in the background? The trouble is, I'm also a huge fan of Final Fantasy 14's story, and there are loads of potential storylines and landscapes we've still yet to explore in the lands of Eoreza, Norvrandt, and beyond. While a similar critique could be lobbed at Return To Ivalice, the previous Alliance Raid series that delved into the extended mythos of Final Fantasy Tactics, Yasumi Matsuno went to great lengths to not only justify the crossover, but brilliantly weave Ivalice into Eoreza’s history. The same can’t be said for Dark Apocalypse, where a hole in the ground seems to lead to Earth in the distant future for some reason. If we must honour a completely different series, it would be nice if Dark Apocalypse could get past the self-indulgent references and on to the utter adoration for the bizarre that makes the series awesome. Perhaps it’s silly of me to expect surrealism in a MMORPG raid, but this is supposed to be Nier, a series beloved due in part to its affluence for mind-fuckery.

Surprisingly, Anogg and Konogg, the dwarves overseeing the expedition into The Ruined Factory, retained that essence better than the other characters involved. Perhaps it's the slightly antagonistic tone to their speech, where they were comfortable referring to me as "sinner" rather than using the bootlicking ‘Warrior Of Light’ title nearly every other NPC bestows upon me. Or maybe it’s just their haphazard love of explosives? Either way, you can tell Yoko Taro had a ball in bringing this sassy, obnoxious duo to life. They're a lot more interesting than 2P at any rate, whose flat personality has yet to grow beyond a Deviantart pallet swap stand-in for 2B. She will likely be more than that before the end of this story, but right now, there’s not much else to derive from her character. 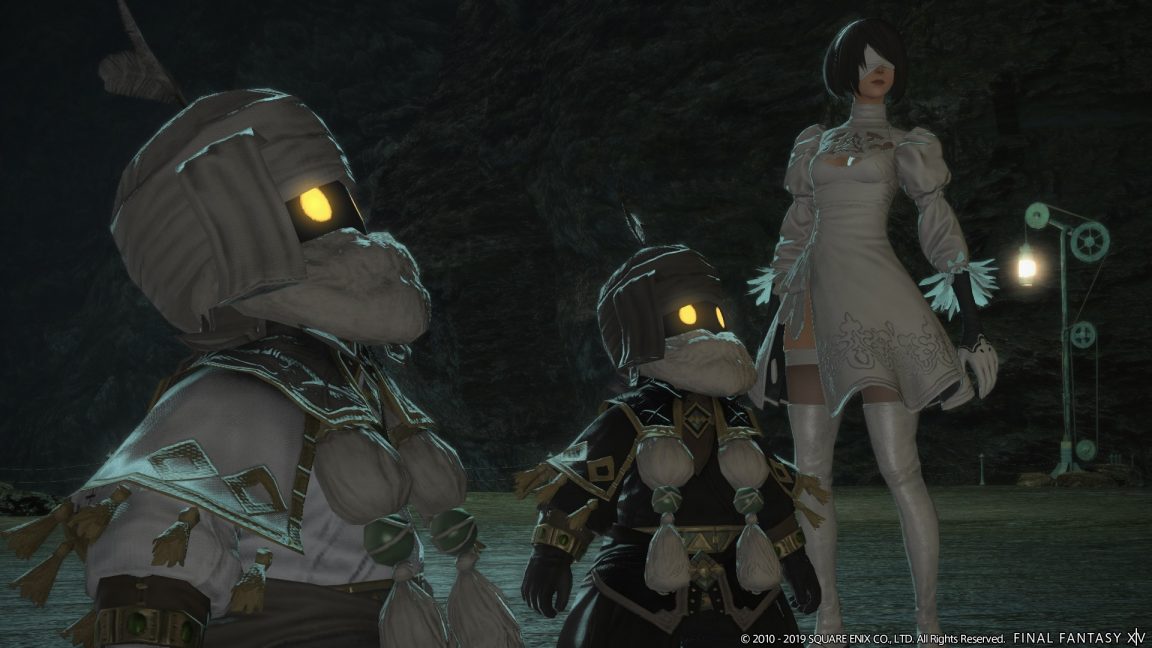 By the time I reached the end of The Ruined Factory, I was a little let down with the story. I want to know how these two worlds are actually linked, whether or not this is a follow-up to Nier: Automata, and where exactly does my character fit in all this. There’s just too many lingering questions, ones that especially sting when the narrative is so focused on tickling a nostalgic funny bone. It ends up feeling like a Star Wars-themed rollercoaster ride: you can slap the logo on the side of the car, but at the end of the day, it’s just a normal rollercoaster with R2D2 plastered on it.

Even with my inhibitions regarding the story, I'd be lying if I claimed Yorha: Dark Apocalypse didn't put the biggest shit-eating grin on my face. The bosses are a bloody hoot, and scooping up loot inspired by that sleek, flirtatious Yorha-inspired leathery design makes multiple runs well worth it. The Ruined Factory is only the first act of a three-part story, there are two most raid wings to come yet, so there's still plenty of time to flesh out the narrative. If anyone deserves the benefit of a doubt, it’s Yoko Taro. Hopefully, before the curtain call, Yorha: Dark Apocalypse grows beyond being a mere Nier: Automata-themed amusement park ride and stands all on its own.