Fallout 4: Nuka-World gives you a choice of endings. What will you do? 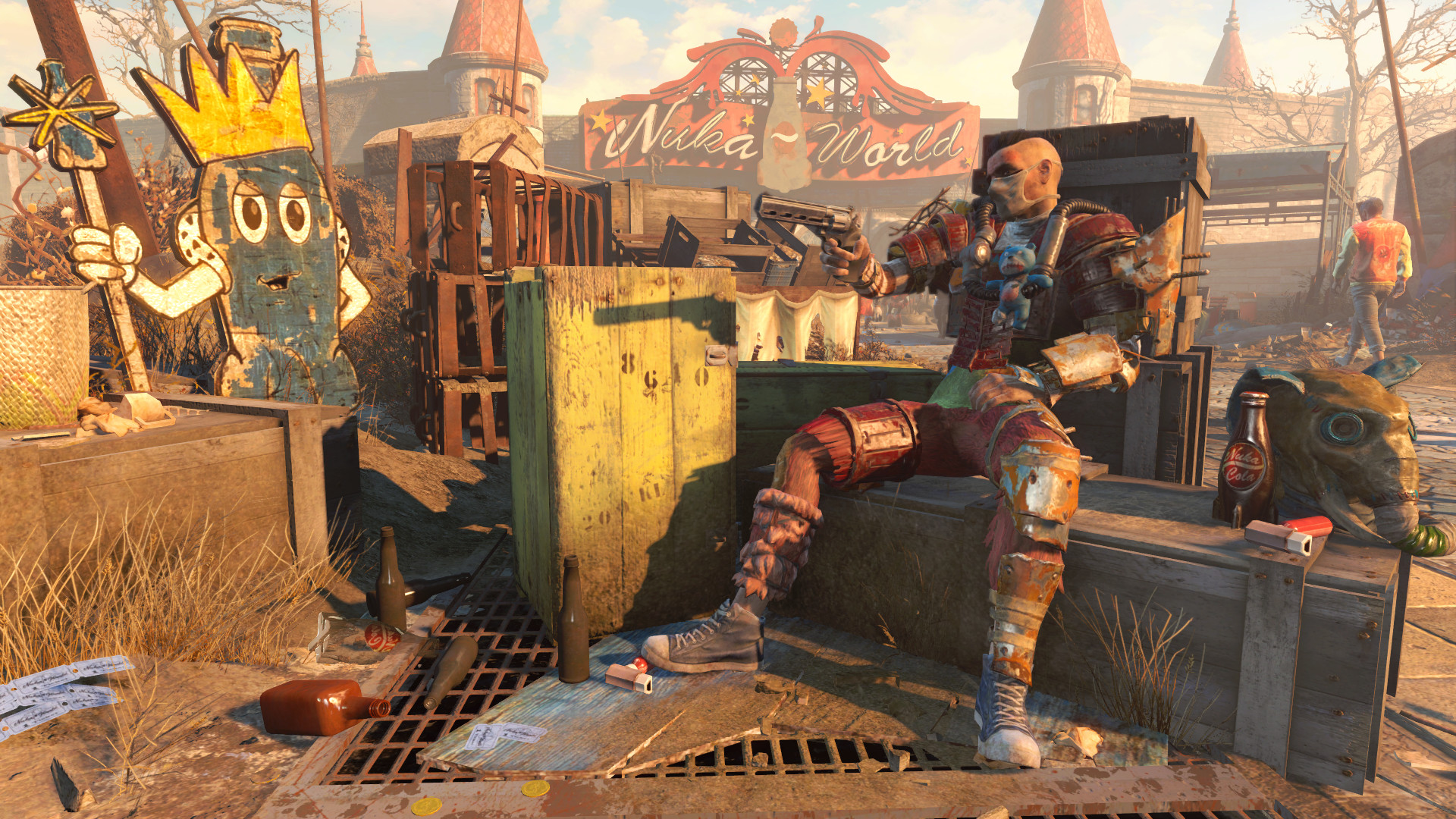 Fallout 4: Nuka-World has two major endings: one where you take the "good" path and beat up all the raiders, and three variations of the "bad" ending where you help the raider gangs become a serious force in the Commonwealth.

Unusually for Fallout 4, Nuka-World's "bad" ending is the main one; you're strongly encouraged to embrace the life of a raider and set up shop in the theme park: doing so seems to have no consequences in terms of the main Fallout 4 faction relations, even when you hand over some of your established settlements. Meanwhile, the "good" ending is only available via a sidequest path Open Season, and is nasty, brutish and short; see the Open Season section below for details on how to trigger and complete it.

By the way, we have a huge Fallout 4 guide you can check out if you're struggling with any other part of the game. If you have questions, we have answers.

The main, "bad" ending is definitely the more interesting of the two; towards the end of the main path of Fallout 4: Nuka-World one of the three raider factions will turn on you, and you'll have to destroy them to finish the story. There's no way to avoid this, but you can control which faction goes rogue.

Which faction you end up fighting during the ending of Fallout 4: Nuka World is dependent on how much favour you build with each of the three raider factions in Nuka-World, which is in turn determined your actions during two quests: The Grand Tour and Home Sweet Home. Here's how that works:

The system seems to be heavily weighted towards The Grand Tour, so the easiest way to ensure your least-favourite faction is the one to go is to ensure they get fewer parks than anybody else. Splits like 2-2-1, 4-1-0, 3-2-0 will all result in one faction being royally pissed off with you.

If you split the parks 3-1-1 or even 5-0-0, there's an even chance of either of the two unhappy factions turning on you. Avoid the wrath of the one you want to keep friendly by taking them raiding with you during Home Sweet Home.

(We weren't able to discover if completing radiant quests for factions increased favour. If it does, it's not as reliable as the other two methods mentioned above.)

Nuka-World faction perks: how to choose a gang to support

At the conclusion of Home Sweet Home you'll transition automatically into Power Play, the final quest of Fallout 4: Nuka-World, in which you'll have to fight the third faction as you seek to restore power to Nuka World's generators.

At the end of Power Play, you'll be granted two of three possible perks. The two perks you receive depend on which factions are alive; there's no way to get all three. Here's what's on offer:

You probably don't need to be told which of these perks works best with Fallout 4's Infiltrator build, right? It's the Operators. Oh, gosh, is it the Operators. The other two are pretty interesting if you're going for One Punch Man, though.

One last note when considering which faction to support is that the Operators will give up more loot than the other gangs when you grant them a park, so if you like their perk, giving them all five parks and using Home Sweet Home to raise favour with your second favourite faction is the most rewarding path.

Not what you're looking for? Our Fallout 4 guide and Fallout 4: Nuka-World guide might help.

So you don't want to be a raider? No worries. At any point in Fallout 4: Nuka-World's story quests, you can change your mind and opt to murder all the raiders instead, freeing the traders to run the park. Simply visit Mackenzie, the doctor in the Nuka-Town Market, and accept the Open Season quest.

Although Mackenzie makes it sound like you can just quietly murder the gang leaders and continue as normal, attacking any of the leaders enough to upset them will aggro every raider in the park - including Gage, your companion. It will also fail all other Nuka World story and radiant quests.

That said, you can still restore power to the park by exploring for yourself, and some of the other quests will still be available. Up to your conscience here, really.