Destiny 2 is loaded full with great guns - here are some of our favourites.

Although more Exotics will probably be released for Destiny 2 as time goes on, there are five available right now that we're particularly fond of, and which have proven useful during the Raid and in other situations.

If you want to have a look at all of the Exotics available in Destiny 2, we've got you covered. We also have even more information in our enormous Destiny 2 guide, which covers every corner of the game.

Our top five Exotics so far, in no particular order, are as follows. 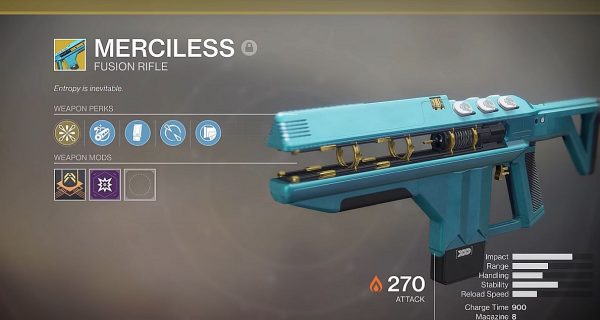 Merciless - solar fusion rifle
One of the neat things about Mericless is its Intrinsic Perk, Conserve Momentum. If you shoot an enemy without killing it, the gun's rate of fire increases until you get a kill. Reload right after you kill an enemy and the weapon increases damage output, thanks to the Impetus trait. It's a nice weapon to have your arsenal, particularly when fighting bosses.

Other perks, such as Chambered Compensator, will improve recoil direction, and with Fitted Stock you can improve recoil direction even more. This helps with stability, but also makes the weapon a bit heavier. Merciless also has Extended Mag which increases the magazine size, but reduces reload speed. Regardless of how you configure your perks, this is a fine rifle. 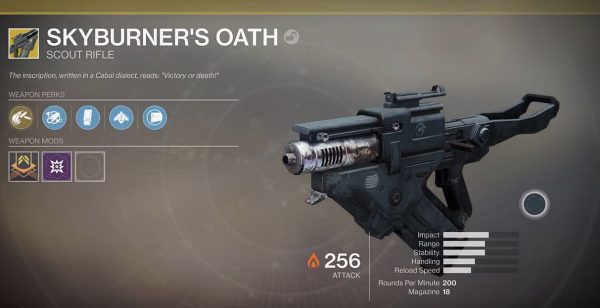 This is a fully automatic weapon that fires solar slugs. Your shots do more damage when aiming down sights thanks to the Slug Rifle perk. Paired with the trait For the Empire, this full auto weapon doles out extra damage to Cabal and will go right through Phalanx shields. That is useful in the Leviathan Raid, which gives you plenty of Cabal to practice your aiming on.

Skyburner's Oath has Extended Mag and Extended Barrel perks; while the latter increases range, the weapon weighs a bit more reducing handling speed. Luckily, the Short-action Stock makes it easier to grip which should help make handling easier. Ammunition for this weapon is also easier to come by than Power weapon ammo, so Skyburner’s Oath high on our go-to list of Exotics. 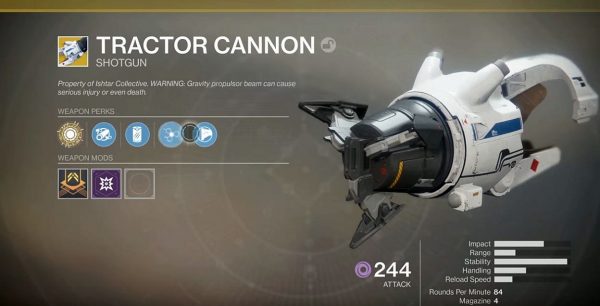 Tractor Cannon - void shotgun
We really enjoy using the Tractor Cannon, thanks in part to the Repulsor Force perk and the Scientific Method trait. With the former, every shot pushes enemies away, providing you with plenty of time to get out of the way. This is especially useful if you're getting mobbed. Scientific Method, meanwhile, makes things even better. Every time you hit an enemy and send it flying, it provided you with a short boost to speed and weapon handling.

We posted a spotlight video on the Tractor Cannon in Our Destiny 2 Exotic weapons list before, and if you haven't acquired it yet, the video will show you how to do so. 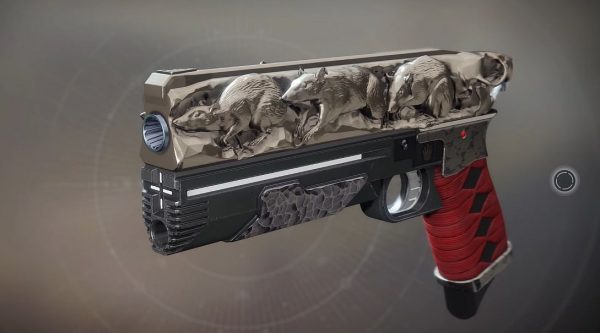 Rat King - kinetic sidearm
Not only is this sidearm extremely high on our list of Exotics, we think it's one of the cooler looking weapons currently in-game. The more members of your fireteam that have the Rat King, the more it benefits the entire group with increased rate of fire. It also stacks up to six times, so the more the merrier, because the increase of fire rate alone makes it ridiculously fun. Plus, you can turn invisible. Awesome.

The Rat King is obtained through a Weapon Quest unlocked via the World Quest on Titan instead of an random drop, so it shouldn't be hard to find plenty of people or members of your Clan who have it on hand. 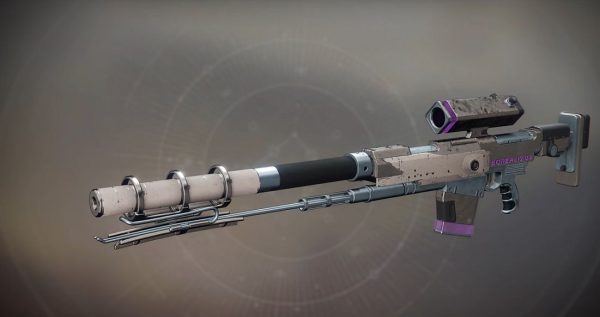 Borealis - multi-element sniper rifle (PS4 exclusive)
This is a one-size-fits-all weapon due to its ability to change elements, so it's extremely handy in Raids. The Borealis allows the player to charge the weapons’s damage type, cycling between Solar, Arc and Void. This works well for those who have no idea what enemy type they will be going up against. If you run across Solar enemies, change cycle the Borealis to Solar. Encounter different enemies, shift to Arc or Void - whichever is most effective.

Another nice thing about the sniper rifle is that upon breaking an enemy shield, it will transfer one bullet from reserves into the magazine. That makes it so there isn't a need to reload right after firing, giving you a clear and easy shot at whoever was holding that shield.

Unfortunately, Borealis is a PlayStation 4 exclusive at this time, which means PC and Xbox One players won't be able to get their hands on it for a least a year.

Since we're on the subject of Exotics, in the video, Arekkz shows off two really neat items which aren't weapons. These are a ship and a sparrow.

Erianna's Vengeance is an Exotic ship which drops with an interesting transmat effect modification. In this instance, the ship adds a Cabal drop pod appearance to the player's transmat effect. This means that when the player drops in, they are essentially coming in like a Cabal. You can replace this with any transmat effect in your inventory, of course.

The sparrow, Vanishing Point, will reload the player's weapon while riding it, and the boosters are rather over the top instead of the typical glow out the back end. It's a very handy vehicle to have that also makes you look cool in the process.