Those who are sociable can now access the Clans progression features in Destiny 2.

Clans progression features in Destiny 2 were delayed a few days post launch, but went live yesterday. This is good news; even armed with our Destiny 2 guide, you'll want buddies by your side.

Basically, Clans in Destiny 2 are a way for folks to create a group of friends who can then set out and kill baddies together. It's optional, obviously, but creating a Clan will also earn players some neat loot and the ability to create a swanky banner.

There are some nice perks associated with being in a Clan, as the more a player assists, they will unlock exclusive Clan Banner perks. Also, when a member earns end game rewards, other Clan members will also be rewarded.

Clans can also host other players as a Clan Guide via Guided Games, when the latter launches. This feature will go into beta the week of September 26.

Here's the steps you will need to take to access Clan progression features in Destiny 2:

Complete said steps and you will begin to earn Destiny 2 Clan progression and rewards. If you want to create your own Clan, just head over to the proper page on the Bungie website.

The Clan system works around a season. While we're not sure at present how long a season will last, we do know that with a new season comes a reset. This provides members an opportunity to earn new perks to unlock for Clan Banners as they level up, and a new seasonal banner staff to earn.

Clans will also earn weekly XP, and even if a member is playing on a different platform, XP earned will be applied to the Clan, since the system is hosted by Bungie.net. Members will also provide weekly contributions by completing objectives. The points are capped out at 5,000 it seems. Different activities will provide different XP points, so keep that in mind when trying to cap for the week before the weekly reset on Tuesdays.

For example: Patrols will provide 250 XP; Crucibles or Strikes 500 XP; Raids, Nightfalls, Trials of the Nine will dole out considerably more XP.

Each week, Clans will also earn Engrams when completing activities such as Nightfall and Crucible. It's worth noting at least half of the Fireteam members will need to be in the same Clan in order to earn the rewards. The Crucible Engram, for instance, requires a single win and the Trials of the Nine Engram requires a 7-win ticket. Upon completing these weeklys, give Hawthorne a visit to pick up the reward.

Everyone in the Clan will receive these rewards when a member participates in the weekly activities providing the member met the aforementioned reward requirements.

Oathkeeper's Score is something which can be earned once Guided Games are live. Clans with better Oathkeeper's Scores are adept at guiding fireteams in Guided Games. Playing according to the "Guardian Oath," finishing activities or disbanding amicably will add to better scores.

Clan Banners will grow in strength as the Clan levels, and doing so will earn perks which can be applied to the Banner. In Season One for instance, there are six levels to be earned and each provides a different perk.

When the Banner reaches level 2 the Spread the Wealth Perk will unlock. This perk provides additional Glimmer when looting Engrams. At level 3 the Public Service perk is awarded and will increase public event rewards. The level 4 perk, Scavenger: Cabal, improves rewards from eliminating Cabal enemies while the level 5 perk Venture Capital increases the chance for rep tokens when completing Nightfalls, Raids and Trials.

Hitting level 6 earns the Clan Banner perk Strength in Numbers. This increases the chance of receiving an Engram when completing playlist activities with a clan member. 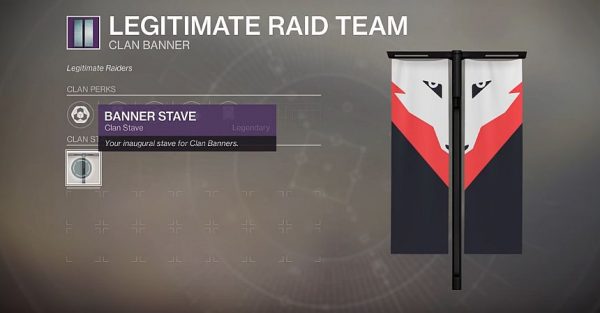 Clans can also use banner staves. At present, the standard stave is available, but looking over the stave slots, it appears 12 can be earned. Some, it seems are tied to clan level rewards.

In short, Destiny 2 will reward you for being social, not that there's anything wrong with being a lone wolf, but rewards that can make you more of a bad ass are always nice.

Destiny 2 launched earlier this week and will be made available on PC October 24.