The Rat King is a beautiful gun, and it can be yours if you follow these instructions.

The Rat King, which is, if you check the lore, named after a Pied Piper-like figure who was said to have died many deaths and returned anew each time, is a pretty wonderful weapon. It's a Kinectic Sidearm, and one of the most visually impressive weapons in the game, with a trio of rats carved into the side of it. As part of our complete Destiny 2 guide, we've got a comprehensive look at how to unlock this cool, unique weapon.

A Rat King, colloquially, is a pack of rats that have become tied together, their tails looping around in knots; like its namesake, you'll need to work together both to obtain and to get the most out of this weapon. It can be upgraded with the 'Rat Pack' ability, which increases its power whenever another Guardian is also using it (which stacks up to six times), and is reliant on teamwork to unlock.

There's no other weapon ability in the game quite like it (although it's worth noting that the power only kicks in when you and another Rat King user are near each other - you can tell because the weapon starts glowing when its power has been increased by another weapon holder). It's going to be a very useful weapon to have for a six person Raid.

It's a neat Exotic weapon. To learn more about the other ones hidden within the game, be sure to check out tips on finding every Exotic weapon. You'll also need to complete the campaign to unlock Destiny 2's World Quests to get this one. 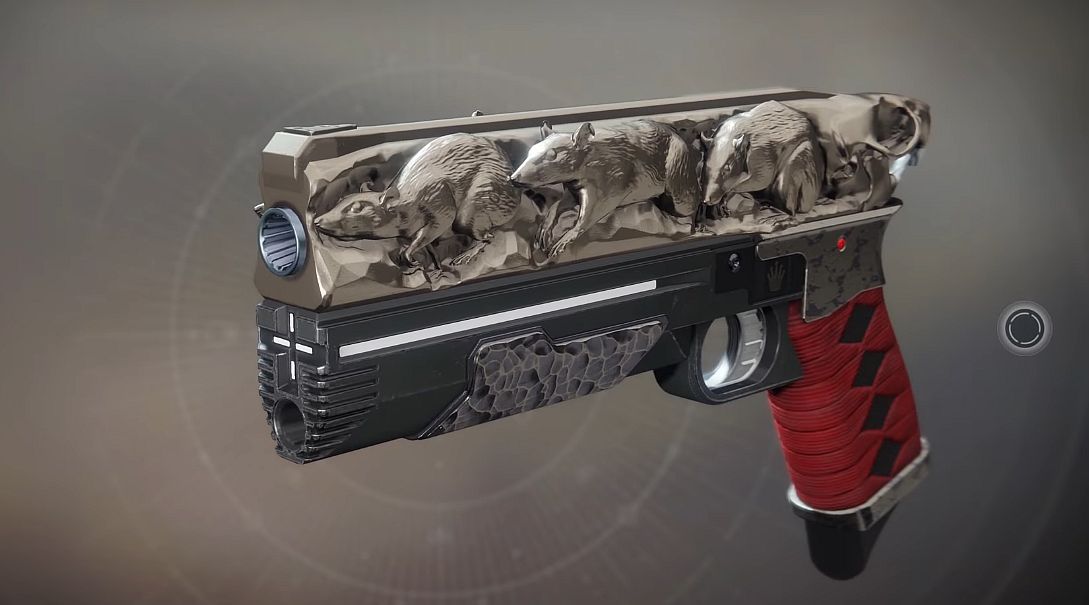 How to get the Rat King sidearm in Destiny 2.

To access the post-game quest that you need to go on to find the Rat King, you first need to finish the campaign and hit your maximum level. Have a look at our tips for levelling up fast if you need any help dinging 20 as fast as you can.

Once you've done that, and the blue quest markers appear on your map, you're ready to start. Head to Titan and accept the first blue quest on the screen.

Complete these missions in order - it shouldn't take longer than two hours - and you should get the Rat King's Crew drop at the end of the final mission.

A riddle! How fun! The Rat King's Crew item description reads as follows:

"The Rat King's Crew / Runs to and fro / Good girls and boys / Know where to go / Pick up your toys and darn your socks / on errands of woe, on errands we walk" - Old Children's Rhyme

Try not to focus too much on the broken rhyme scheme, but instead look at the clues here: there's a three-step process to 'complete' this quest, and you are encouraged to 'solve this riddle with other rats'.

As it turns out, this is very simple. Get into a Fireteam with at least one other player (you can do this with as many friends as you want, as long as there's at least two of you) and complete three patrol missions with the Rat King's Crew in your inventory. It doesn't matter which ones you do, or where you do them. Once you complete three, you'll move to the next part of the riddle.

This time, you just need to complete two public events with at least one other player in your Fireteam. Do this to open up the third riddle.

A terrible rhyme, but a very easy riddle to solve - you and your Fireteam member(s) need to head to the Crucible and complete two matches. Win, lose, draw, you just need to complete them.

'Let five remain' is referring to how many minutes need to be left on the clock when you finish. You need to finish the Nightfall Strike with a full five minutes left on the clock to complete this step. In Destiny 2 Strikes you start missions with eleven minutes and gain time for kills, so you can't afford to dawdle if you want to get this gun.

The Nightfall, of course, changes every week - some weeks finishing with five minutes spare may be more difficult than others. Pay attention to whichever modifiers are active that week and strategise towards getting through the mission as quickly as possible. Also, make sure you have a fireteam of three people for this - it's going to be a whole lot harder with two. Try to make sure that, between you, you have a good mix of elements covered in your abilities and repeat the Strike a few times to improve.

Do this and you'll be granted the Exotic Rat King, and so will your fireteam if they completed all the other steps with you. Remember that the weapon's real strength lies in the power increase it gets when multiple players carry them together, so don't expect amazing results out of it without teamwork.