Every subclass in Destiny 2 each has its own super ability with different strengths and weaknesses. We're here to tell you all about them and offer some tips in the process.

In Destiny 2, each of the nine subclasses feature a unique super ability, which is activated with the L1+R1/LB+RB on controllers, and F by default on keyboards, after building up enough charge.

You will need to use these important skills effectively in Destiny 2 to succeed in some of the higher level activities. Each requires charge to use, which will accrue in combat and can be increased with gear and ability modifiers. Hopefully the tips we've provided below will help you in that regard.

This page is part of our Destiny 2 guide, and is a handy companion to our overview on choosing a Destiny 2 class and Destiny 2 subclass guides.

Watch the video, or read through the information in text form below - whichever you prefer. The controls below assume a PS4 controller, so substitute as follows for Xbox controllers or keyboard and mouse setups:

The Arc Staff is a great weapon when the right combos are used, plus it can be specced for unlimited Dodge energy in case you direct your hit badly or don't land one in time, and need to get out fast. Movement is the key to success using the Arcstrider; stay with the action and your Hunter will automatically target the enemy nearest to you. Your job is to avoid getting hurt in the process.

When your super is full, fire it off to summon the Arc Staff. You can then roam the battlefield dishing out damage using the melee button. If you want to get fancy, though, there are a couple of combos you can try.

Here are the commands for the Arc Staff.

This one is rather simple, and very similar to the Gunslinger's Golden Gun from the original Destiny. Just trigger your super to bring up a flaming pistol, then get off three devastating shots before the super bar drains. Golden Gun's Solar Light vaporizes enemies, and can one-shot some pretty strong opponents.

One of the Gunslinger's upgrade paths allows you to fire six shots from Golden Gun rather than the standard three. You'll need to fire them fast, though, as you'll have a shortened duration. This is a fairly uncomplicated subclass, and can be very effective against bosses.

The Hunter Nightstalker's super is called Shadowshot. Activate you Super and you'll leap into the air and pull out a Void bow; you have a very brief window to put your cursor on a target while the bow is drawn, and then the shot fires automatically. This window is long enough for an enemy to take you out, but not long enough for huge changes in aiming, so be sure your cursor is near where you intend to hit before shooting.

Shadowshot creates a Void Anchor that tethers nearby enemies, restricting their movement and nerfing their defence. You can spec it to hit more targets for longer, or you can go in the other direction and opt for three less powerful shots rather than one big one; hit the super buttons again to fire your subsequent shots. If you're good with Shadowshot this second option can be very effective in the Crucible, but be aware that you need to get all your shots off before the super bar drains completely. 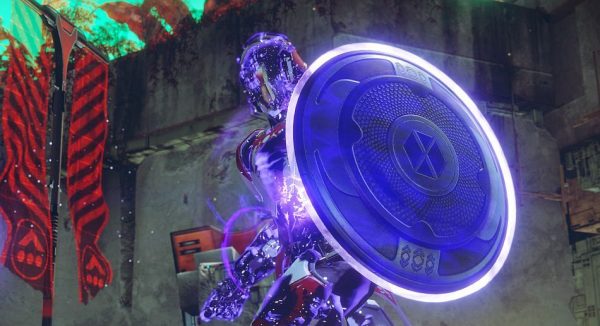 The Sentinel uses a Void Shield as weapon as well as to guard. The latter is super important, especially when moving towards an enemy, so don't discount using guard.

Trigger your super to summon the shield, then use the melee button to attack - or take advantage of the advanced moves below.

Here's where the Titan Striker goes Hulk Smash on enemies. Activating this move triggers a massive ground pound attack - but unlike the first game, in Destiny 2 your super stays active and you can roam around unleashing further attacks.

While the Titan Striker super is active, press R1 to shoulder charge - a cool dash move - or press R2 to perform another ground slam like the initial Fist of Havoc attack. The best combo usage is R1, R2 as it doesn't send the Titan flailing all over the place, which will happen if you spam the R1 button.

A roaming Super, Hammer of Sol allows the Titan Sunbreaker to fling powerful hammers around, damaging opponents and leaving dangerous Sunspots even on a miss.

Each throw uses a little bit of your already diminishing super bar, so don't just spam R1, but instead pick your targets. There is a little bit of a delay between your throw and the projectile hitting the target, and the throw makes an arc, so practice to get the hang of it or you could end up bouncing hammers wastefully off the ceiling or onto walls where someone was standing.

Explore the Titan Sunbreaker skill tree to learn how this Super can be used to grant specific bonuses to you and your pals. 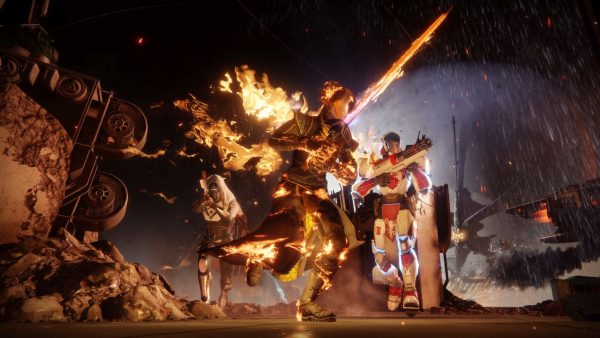 This Super allows the Warlock to leap high into the air and channel Solar energy as blades, unleashing it on the enemies below. After activating the super, press R1 or R2 to throw blades at enemies under your reticule.

If you are specced with Icarus Dash, you can use Circle, Circle to dodge in mid-air while using the Daybreak super.

Another simple super, Nova Bomb unleashes a devastating projectile - but the Destiny 2 version has some interesting new possibilities.

Although you an spec for a pretty standard set-and-forget Nova Bomb, explore the Warlock Voidwalker subclass tree and you'll see you can also activate a slow moving but tenaciously tracking version. Which of these two you choose depends on your playstyle, as they can both be deadly.

Activate this super and your Warlock Stormcaller will levitate, allowing you to zip about the environment fairly quickly while lightning pours out of your hands in a torrent. You only need to face your target to catch them in the stream, so leg it after them to bring them down fast.

This is a very deadly super and fantastic for clearing crowds, but you need to be aware of your surroundings as the easiest way to take down a Stormcaller is from behind. Always keep moving, make sure you have safety at your back, and use strafing effectively - never just turn on the spot to move.

You can increase your survivability and Super damage by playing around with the Warlock Stormbringer's skill tree.

Of course, there are nuances to every class and each super for subclasses, and Arekkz goes over some in detail in the video above, so be sure to give it a thorough watch.