UPDATE: Unfortunately, this now appears to be sold out almost everywhere. However, the standard edition on PC is still up at Amazon, Best Buy and GameStop.

You can now pre-order the Cyberpunk 2077 Collector's Edition on PC in the US.

After it was revealed at E3 that the Cyberpunk 2077 Collector's Edition would only be released for PS4 and Xbox One in the US, many of those looking forward to the game were unsurprisingly disappointed. Especially when it's been available across all formats in Europe.

The good news is that CD Projekt RED listened to the call from fans to bring the PC version across the pond. Stock appears to be cropping up online to pre-order right now from Amazon, Best Buy, Target, Walmart and GameStop. 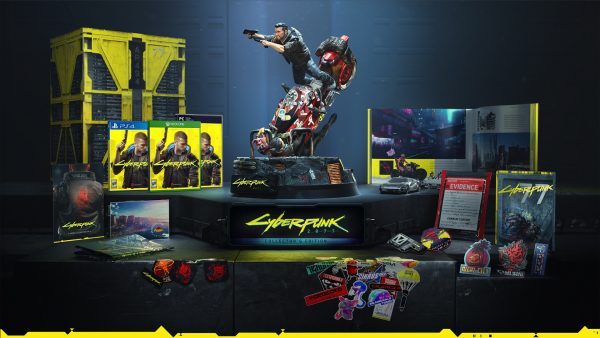 The exclusive physical edition cost $249.99 and comes jam-packed with bonuses as you expect from a CD Projekt RED release. Take a deep breath before we run through it all. Ready?

So, there's a Collector’s Edition box and the game, a collectible SteelBook, a 10-inch statue depicting the game’s protagonist V, a hardcover art book, a metal pin set, a quadra V-tech metal keychain, an annotated copy of A Visitor’s Guide to Night City sealed in an NCPD Evidence Bag, some embroidered patches, a World Compendium detailing the game’s setting and lore, some postcards from Night City, a map of Night City and a sticker bomb set. Phew!

It wasn't the only hefty collector's edition to be revealed after this year's E3. There was, of course, the wallet-emptying Final Fantasy 7 - 1st Class Edition, which comes with a Play Arts Kai Cloud Strife and Hardy Daytona Box set. It's $330 for that, though! You could just go with the Deluxe Edition for $79.99.

Do check out our big round-up page for many more E3 game deals, or you can always keep an eye on Jelly Deals for all the latest offers.