Code Vein mixes anime and Dark Souls - and in doing so, an uneven hybrid that emphasizes much of the best and worst of both is born.

When people say Code Vein is 'anime Dark Souls', the developers probably don't think it's a reductive comment. The key development staff behind this game also helm the God Eater games, a series that is probably best described as a Monster Hunter style game. Style is the kinder way of putting it, to be honest; some might say it's Namco's answer to Capcom's series, while others might call it a knock-off or a clone. God Eater does have a fanbase all its own, however, and it's a series that has managed to carve out its own identity set apart from its obvious inspiration. From that history, logic dictates that this same group has a decent chance of doing the same with the Souls formula in Code Vein, a challenging action RPG about anime vampires. The results are mixed this time around, however. 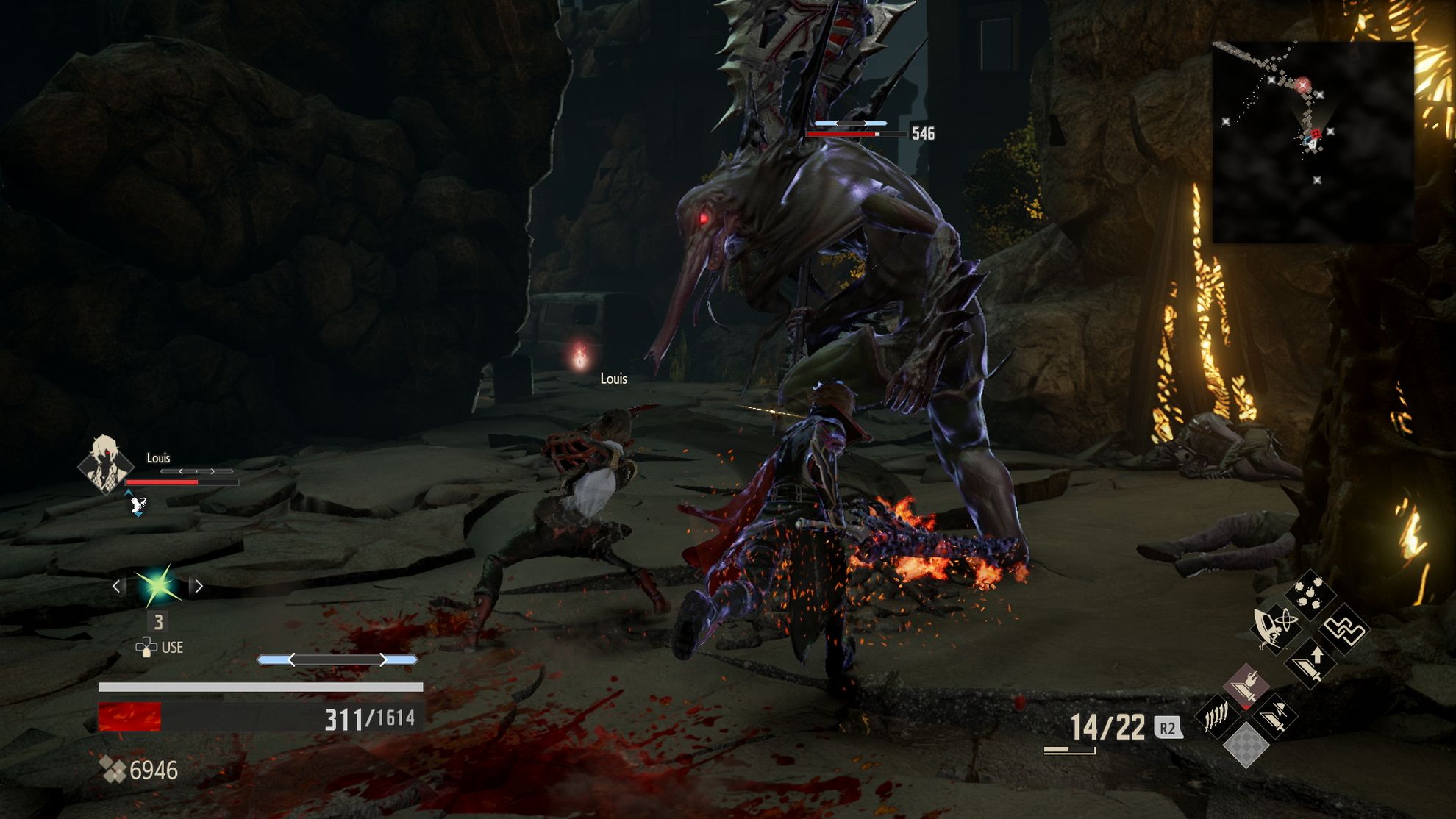 Code Vein makes a strong first impression with its character creator, which is stunningly detailed. If you can imagine a significant aspect of a character's appearance it can probably be edited here. Want a tail? Absolutely cool. Different color eyes with different color pupils? Go for it. The same is true of clothing options, too - in general, this is one of the most impressive create-a-character suites going, up there with the likes of SoulCalibur. People are going to be uploading screenshots of these created characters to DeviantArt and writing fanfiction about them in no time. It's probably for the best they give you this suite, too, as the actual default character designs out in the world of Code Vein are atrocious, the worst sort of cringe-worthy, 'fanservice' driven outfits. Unfortunately you still have to look at those designs on NPCs.

The depth of the character creator is clearly Code Vein's most unique selling point. There are plenty of Souls-like games out there now - there's the Surge, Nioh and Sekiro, for instance - but none has a feature quite like this character creator. All the other games are focused on their own grim dark lore, for better or worse, but Code Vein is absolutely something else. If you want to look serious, you can - but if you want to craft a protagonist who looks incredibly silly, the game isn't going to stop you. Indeed, it's packed with additions that only serve to enable that decision.

I hate to harp on this Souls comparison, by the way, especially after the game's director told me that Code Vein is much more than anime souls, but it's difficult to describe this game any other way. It knows what it's doing; and resist as you might, you too will eventually give in and call it what it is once you see its painfully close knock-off Anor Londo (anime londo?).

That's not to say there isn't narrative; there is, and it is in abundance. You play a revenant - a vampire, basically - and you've got to feed on blood to stave off a hungered insanity that basically turns revenants into zombie vampires. In Code Vein's ruined and decayed world pure humans are now few and far between, however, making it tough to find those to feed on naturally. There's an entire complex narrative setup of this world, but the short version is to say that your character is different to most others; you are a revenant, but you have unique powers. Basically: you're the chosen one, and the world needs saving. Obviously. 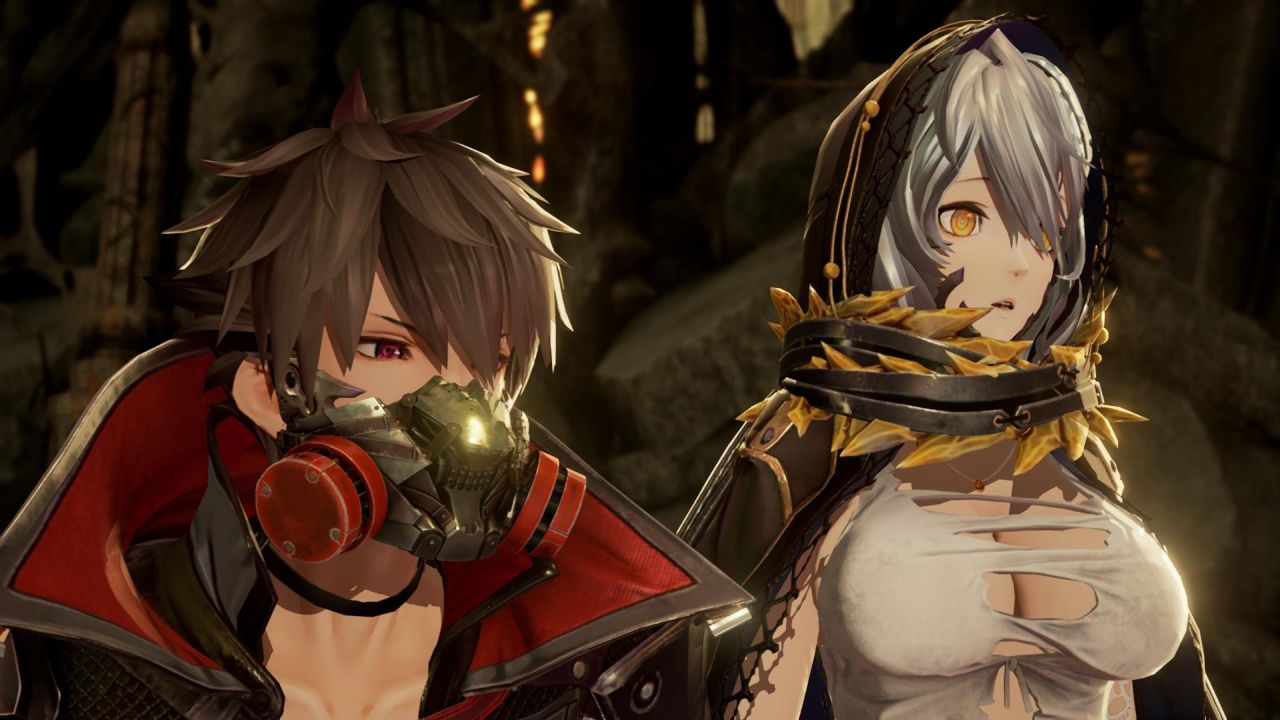 The journey to save the world takes the form of a pretty standard-issue action-adventure structure. There's a hub area where you can take care of the RPG stuff like buying items, upgrading weapons, chatting to NPCs and of course tweaking your character appearance to ensure that any screenshots you always look sufficiently cool. When you're ready, you head out into the wider world to explore a varied map, something best done either with an AI partner or with a friend through online co-op. The areas you explore are much as expected, packed with secrets to discover and beasts to slay.

Combat is a fascinating riddle of design, simultaneously where Code Vein is at its best and also where some of its best original ideas unfortunately unravel. It's snappier and faster than your average Souls game, which perhaps makes sense given that the protagonists are skinny teens and not armored soldiers. While it isn't quite as sharp as some of its peers, in standard encounters there's still a meaty sense of feedback and weight to your actions, health bars on both sides of your blade melting away with an exciting or agonizing ease, depending on if you're being hit or doing the hitting. Bosses are where the game feels less satisfying - too often they end up missing that delicate balance between challenging and frustrating, leaving you to wail on a meaty, powerful beast without any satisfying feedback. Moment-to-moment combat across the game's map actually feels rather good, however.

There are intriguing changes to Souls style formula, however. The largest of these is the Blood Code system, which is basically a fancy name for character classes. Blood codes provide different stats and skills, both active and passive, that are known as gifts. The twenty-plus blood codes split into the basic class lines you'd expect - ranged or melee, two or one handed, spell-slingers, rogues and tanks - but what's curious is that the gift system's design means that you can slowly mix-and-match the powers in a cross-class fashion to some degree. This means you can take a ranged ability and attach it too a class that's typically a rush-down melee beast, or give a tanky character a teleport that naturally belongs to a much more fragile class.

The system is sadly a touch more restrictive than you'd expect or want, but there's a kernel of something really special here. There's enough depth here that those dedicated might be able to find some cool ways to break the system in unintended ways, and that's always exciting. The addition of true co-op play offers something properly different, too. Even when playing with an AI, these partners are useful - you won't want to venture out into the world without them. As the game progresses more potential partners will open up to you, and in line with the blood code class system you'll want to partner up with a character that offsets your character's weaknesses and offers solid assistance. Experimenting with builds and a range of different AI partners with different skills and builds is probably the best part about Code Vein.

Were Code Vein to get a sequel, the path is already clearly laid out for the developers: solid ideas already exist, but multiple delays portray a clearly troubled development that couldn't allow this title to reach its full potential. Even then, there's a lot here to like - glistening in the midst of some baffling and disappointing areas of this game's design, there are exciting and smart systems. The world is somehow fairly engaging to explore thanks to an abundance of enemies and things to discover, but make no mistake: despite being a colorful, striking game in character design terms (sometimes for good, sometimes for ill), the world design is as bland and boring as they come. That, too, could be replaced with something far more exciting. There's also that lore, barely mentioned here. Code Vein is likely to be slated for its story - and rightly so. It's rubbish. But underneath the cliche characters spouting rubbish dialogue there's a surprisingly complex world background that the developers clearly thought about to a great deal of depth. Like the flawed but intriguing game design, one wonders if this could be a solid foundation for something more to come.

Flawed though it may be, sometimes a distinctly B-tier game is exactly what the doctor ordered - especially at this time of year, in a sea of mega-hyped triple-A. You have to know what you're getting into, accepting the poor narrative and slightly botched execution of some of its cleverer ideas, but Code Vein still has a recent amount to like. Come for the combat and the intriguing blood code system - and stay for it. The rest? Well, hopefully it'll be better next time.