Candy Crush Saga for mobile turned a year old last month.VG247's Dave Cook speaks with developer King about the mass phenomenon, and why success needn't be reserved to studios with triple-a budgets and big publishers behind them.

“We were guessing what kind of download numbers we would see, and even though we were guessing bigger numbers than we would think, nobody came close to the real numbers, so that was very fun to see, that instant success.”

As you read this, Candy Crush Saga has been played over 150 billion times on mobiles since it launched on November 14, 2012. That's not a small number. This is the kind of widespread visibility and market-share that money cannot buy, but is instead reserved for those lucky products that just happened to arrive at the right time and place. It's becoming common knowledge that Rovio released over 30 games before Angry Birds hit the big time, to cite one example.

There's no magic formula for success in such a crowded mobile market, but now that Candy Crush Saga developer King has found that explosive return on investment, it now has to consider both how it got there and what it must do to remain in the sweet spot. From this side of the fence, I'd wager that the concept of 'virality' had a large part to play. Consider that extra lives can be earned by enlisting the help your Facebook friend network, and it's not hard to see how this could have a viral knock-on effect. It's devilishly smart, if not intrusive.

Virals often happen by accident, or were never really intended to catch on as they do, so how then does King make sure the fad doesn't fade without anything to follow up on? I spoke with King's Games Guru Tommy Palm about the impact Candy Crush Saga has had in the mobile space, among social circles and on the planet's productivity as a whole.

"I don't think anyone could foresee such a massive hit," Palm recalled. "We have a special recipe of making games at King, where we try the core mechanics on our website King.com, and we had already made several match-three games before, but when we made the first version of Candy Crush - the one level game - we saw that this was hugely popular with our fans. So we kind of had a hint that it worked well but with the enormous numbers we're seeing, it's just extremely humbling to see how something can become so popular."

"We had an internal competition on the launch one year ago, "Palm recalled when I asked him how it felt to realise that Candy Crush was becoming a big success. "We were guessing what kind of download numbers we would see, and even though we were guessing bigger numbers than we would think, nobody came close to the real numbers, so that was very fun to see, that instant success. It continued to grow of course, and we now have over half a billion Candy Crush downloads on multiple devices."

It's now estimated that one in 23 users have become a fan of Candy Crush Saga on Facebook, and it's unsurprising, given how difficult the game becomes at a fairly early stage without spending money on boosters or asking your social network for aid. While many gamers out there have bemoaned this - some would say, 'heavy-handed' - coercion into either spending or pestering, Palm feels that the game's social spread is certainly similar to that of a viral.

"Definitely with Candy Crush," Palm continued, "one of the most important ways of it spreading have been people telling their friends about the game and that comes back to its social nature, with gameplay mechanics where, if you invite three friends or get three friends to help you, you can unlock the next episode.

"We see a lot of 'casual talk' about the game outside of the actual game, and that's when you truly have a social game on your hands. When it's something people can talk about instead of the weather that, I think, is a very important thing for us. Also with mobile games now, they can become so mass market because everybody - or at least most people - has a phone. It's a relevant 'news piece' for everyone, that this is something they can download for free if they want to check it out." 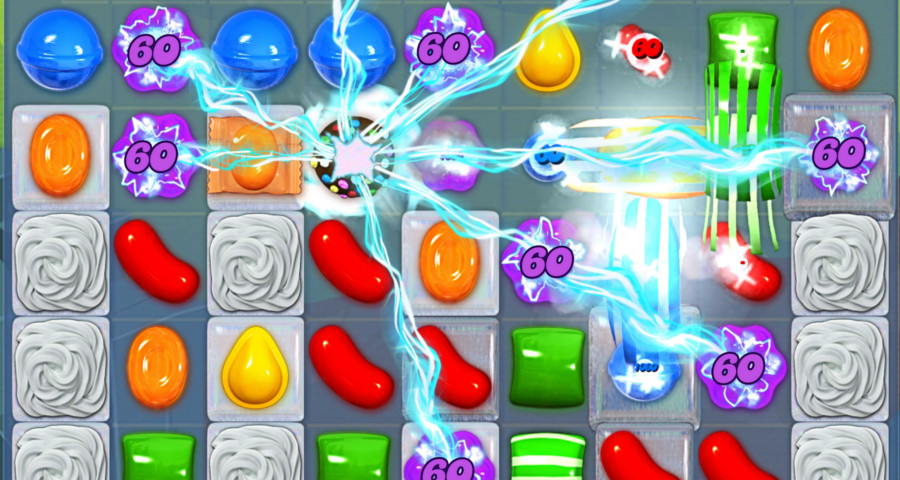 Palm has a point of course. The game is free, has a lot of people talking about it, and comes on a device that countless people have right now - either in their pocket or on their desk in front of them. Coupled with the social slant and you can see quite easily how something like Candy Crush Saga can invade so many homes, offices and schools. In this regard, King has a mainstream hit on its hands, yet the game is constantly savaged by the 'hardcore' pack as nothing more than a casual, irrelevancy.

I asked Palm for his thoughts on how that balance has shifted in the year since the mobile game launched. He replied, "This is definitely a very strong trend, that the devices are getting more and more capable as gaming devices. They now have great screens, the processing power is almost the same as the last console generation. It's going to continue to grow as a phenomenon, and I think that trends were seeing show it's a very good business. We're also seeing a lot of traditional game developers coming over to this space and developing all types of different games that you can possibly imagine."

But while developers continue to flock to the potentially lucrative, but increasingly saturated mobile lottery, King has opted to reign in its focus to avoid spamming the arena. Palm explained that King has been around for more than ten years and has always strived to have a strong portfolio of games, but Candy Crush has taught him that cross-platform gaming is a growing attraction, and one his internal teams are looking at moving forward. What this means from an IP standpoint is anyone's guess, but Palm did tease that surprises are currently in the mail.

Palm closed in saying that if anyone had told him - a year ago - that Candy Crush would hit half a billion downloads, he simply wouldn't have believed him. Yet here we are. It just goes to show that perhaps the mobile market is still unpredictable, and fraught with both danger and potential spoils for those who strike at the right time. Now that King has that footing, future successes should come much easier, but it does beg the question of who will be next?

Who could, potentially, be boasting similar numbers in the mobile market this time next year? It may not happen, or of course, it could come from the most unlikely source. While I don't necessarily agree with or even like the way Candy Crush Saga spikes in difficulty to tip your hand towards either micro-payments or pestering friends on Facebook, it's clearly a format that King's core market have no qualms about. That's not me, however.

I'm basically not in that target market, but I do wonder how inspirational this model has been within the triple-a pack, most notably Turn10, Polyphony Digital and Crytek, which have all employed similar booster models into their games as of late. Could it take off over time? Well, that remains to be seen, but for now, King is riding high in that area of the market and it'll be interesting to see where it all goes from here.

What's your view on the success and potential influence of Candy Crush Saga? Does it handle monetisation and virality well or does the model need work? Or perhaps you have no complaints about the system works and you really love the game. Either way, let us know what you think below.