Get your complete walkthrough of Battlefield 4's seventh mission below, including all dog tags and assignments. 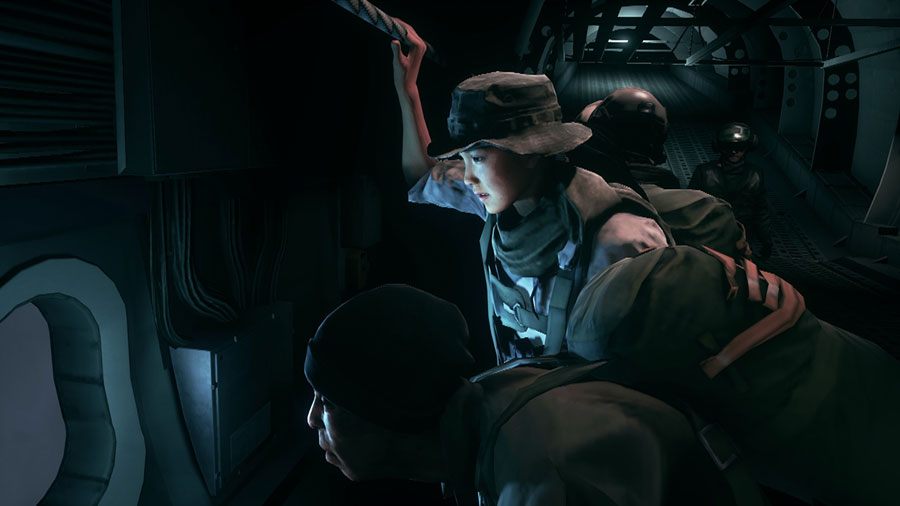 The final mission of the Battlefield 4 campaign begins with the Valkyrie heading straight towards Admiral Chang. Hannah, Irish and Recker are airborne. Irish is again showing signs of his extreme fear of heights. This is a scripted event so just wait until it's time to parachute from the plane. As you descend to the deck of the ship, launch a few courtesy grenades at your enemies below. Once you land hit up the Weapon Crate and Gadget Stash.

Head up the ladder and take cover with your squad mates. Use grenades to thin the enemy numbers. No need to move forward, just keep tossing grenades and snagging headshots. Once the first wave is down a second wave moves in. Watch out for the sniper on the walkway, he's easily the biggest threat of this portion of the engagement. Take him out quickly. As you move forward a helicopter will try to deploy more troops, drop a grenade as they rope down for a sweet multi kill.

When the last of the Chinese soldiers are down move up the broken wing and refill at the Weapon Crate. There's a walk way and stairs to your left. Enemies will appear both above and below you. Deal with the ones below you first by tossing grenades at them. If you run out just quickly run back to the Weapon Crate and resupply. Use the same strategy for the opposition up the stairs, toss grenades to take out the bulk of them and then finish the remainder off with your primary weapon.

After the last of the bad guys are down meet up with Hannah and Irish. Fight your way forward on the deck level and take cover behind the Gadget Stash. Equip an RPG and shoot down the enemy chopper. There's still more foot mobiles to kill so hold your position here. When Irish gives the all clear move to the right side of the deck and take the stairs down.

Once Irish opens the door head towards the objective. Lead the way through the only door you can go to be jumped by none other than Pac. Looks like he survived the chaos back in Singapore. Pac lets the squad know that Jin Jie is alive.

Follow your Tombstone comrades through the Valkyrie. Do as Pac says and help them breach the cafeteria. Peek out and pick the enemy soldiers off one by one. Once the final enemy is down your squad moves in.

Take a left out of the cafeteria. There's three Chinese soldiers in front of you. Rather than run in guns blazing throw a grenade in. Once the third soldier is down, follow you squad to the Medical Bay to meet up with Captain Garrison and Jin Jie. The two leaders argue about how to proceed. Garrison wants to fight and Jin Jie wants to take a more passive approach. Jin Jie wins the debate and Recker opens the door to let the enemy in. When the Chinese soldiers realize Jin Jie is alive the fighting stops.
Just when it looks like you're home free Chang starts to bombard the Valkyrie from his Warship. Irish and Hannah volunteer Tombstone to attack the ship with C4 and a RHIB boat. Follow the two of them to your final objective.

When you regain control drive the RHIB boat to the north. Don't worry about dodging incoming fire, just keep going towards your objective. When you reach the ship Irish will attach the explosives before you take up a position above. Hannah attempts to detonate the explosives but there's no connection.

There are three possible endings. You can choose to sacrifice Hannah, Irish or you can let the warship sink the Valkyrie. No matter what choice you make it's the end of the game. In order to choose Hannah or Irish simply hand them the C4. If you want to sacrifice the Valkyrie don't do anything, just let Chang's ship sink it. Each choice will grant you a multiplayer unlock so whatever you choose be sure to repeat the mission three times to get all three rewards. To see which weapon is unlocked by each choice, take a look at our list of unlocks at the start of the mission walkthrough.