Get your complete walkthrough of Battlefield 4's third mission below, including all dog tags and assignments. 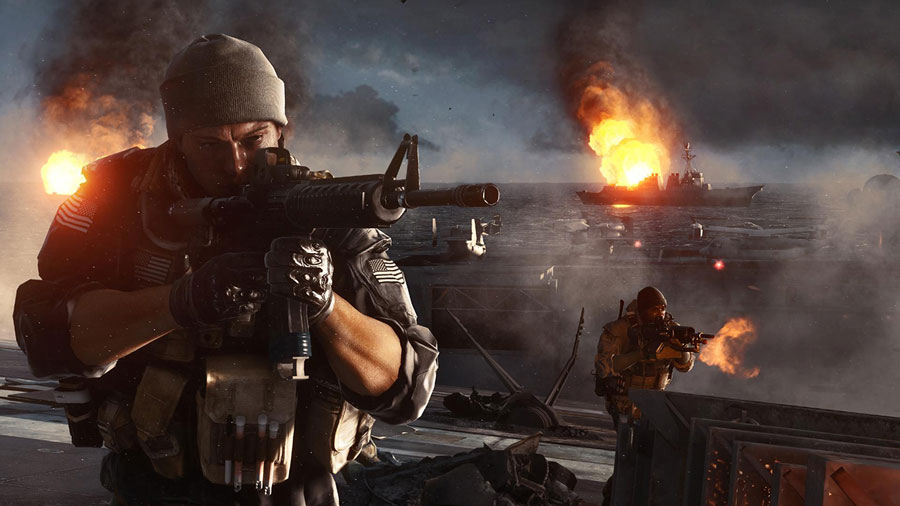 After the brief cut scene make your way through the ship towards your objective. This is another maze that would only be more confusing with step by step instructions. Instead, head to the north and watch out for three key checkpoints that will let you know you're on the right path. Along your journey you'll pass a meeting room with several sailors inside, a cafeteria and the medical bay. Once you're through the medical bay simply follow Pac and meet up with Irish to complete the objective. If at any point you get lost, just keep heading north.

After a brief cut scene where Pac and Irish argue about saving the civilians in the Shanghai mission, follow your Tombstone brothers. As you're heading towards Captain Garrison an announcement comes through to "man your battle stations." Continue to follow your crew outside where you see the USS Titan on fire and sinking. Garrison lets the squad know that Kovic will be leading them to search the sinking ship for intelligence and survivors.

Get to the USS Titan / Locate Hatch G-46

Pilot the RHIB boat towards the Titan. Drive around the right side of the ship and into the hole. Disembark from the RHIB and follow your squad. You're still a few minutes away from any combat so just keep moving in the only direction you can. Agent Kovic tells you to locate Hatch G-46. Unless you simply stand still you can't miss it. Once located open the hatch and drop through to the water below.

Get to the DCC

There section is more following your squad, except this time you're swimming under water. They will swim ahead of you but keeping track of them isn't a problem. Once you reach the end of the line climb out of the water and regroup with Tombstone. Make your way to the engine room and head inside. It's quite dark but the exit is in the north west corner. Head across the catwalk into the next room. A group of sailors are trapped below you and the water is rising. Kovic and Irish have a brief argument about saving them before you move on. As you leave the area the sailors plead for their lives but there isn't a way to save them. Keep moving along the only path you can until you reach the DCC where Kovic takes the intelligence.

As you exit the DCC you run into a room full of Chinese soldiers. Move into the room and work your way forward along the right side. Toss grenades to thin them out and pick off the remaining bad guys with your primary weapon. As you exit the room the ship starts to break apart. You can fire your weapon but it really isn't necessary. This is a scripted event so just enjoy the ride until you take full control back.

Jump down from the wreckage onto the badly damaged deck of the ship. Stay in cover and fight your way forward. If you need to resupply or swap any of your guns out there is a Weapon Crate right next to you. Keep fighting your way forward until there's no more opposition. Jump into the water and climb into the attack boat.
Get Back to the Valkyrie

Drive the boat towards the Valkyrie which is the objective indicated on your Mini Map. Keep your eyes open for enemy boats and take them down as you go. Even if they are behind you, you must destroy them before you can progress further along. After taking down several RHIB and Attack Boats you'll near the Valkyrie. Before you can board the ship you have to take down a lone Attack Helicopter. Once it's down drive the boat into the Valkyrie and prepare for the next part of the mission. 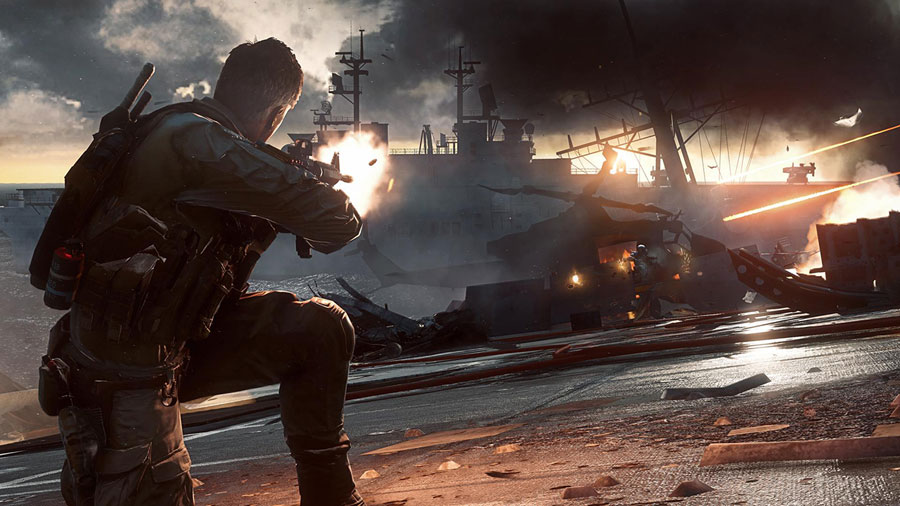 Get to the Bridge

The Valkyrie has been boarded by Chinese soldiers. Don't run all the way up the stairs in front of you but instead use them as cover. Toss grenades in the direction of the enemy troops to thin their numbers. There's a Weapon Crate right next to the stairs so you should be able to toss endless grenades until the last of the opposition is down.

Regroup with Tombstone, follow Kovic and continue on your way to the bridge. When you get outside several helicopters will engage you. Head up the stairs in front of you and use the Gadget Stash to load up with the FM-92 Stinger. Head back outside and lock on to the enemy chopper. It should go down with one shot. Meet back up with your squad and head inside.

There's a fierce battle going on in what looks like a vehicle bay. If you have a shotgun equipped it's going to come in handy right now. Keep with our ongoing strategy of tossing grenades though. The fighting space is small so one grenade can often take our two or three enemy soldiers. There is a Weapon Crate in the middle of the room, but it's virtually inaccessible until after you kill the last of the foot mobiles. After clearing the room head out the only exit and follow Tombstone. Hannah can be seen fighting two enemy soldiers in the Medical Bay. Evidentially she does not need your help.

After Kovic and Hannah finish up a brief discussion she joins up with your squad. You're now five members heavy. Follow the squad outside and continue the fight on the deck of the Valkyrie. The fighting can get pretty intense so stick to the left. There is another Weapon Crate nearby so make sure you're fully stocked up on all the good stuff. Continue to move up with your squad and give Kovic a hand when he asks you.

The Chinese attack the ship with helicopters, wounding Kovic in the process. There's no time to help him, equip your Stingers and take down the incoming enemy choppers. If they do manage to deploy additional ground forces take them out. Keep an eye on your six, they will deploy behind you as well. Once the fighting dies down head over to Kovic who dies from his injuries. Head up to the bridge and eliminate the final two enemy soldiers. Captain Garrison emerges which signifies the end of the mission. Tombstone saved the Valkyrie.