Get your complete walkthrough of Battlefield 4's fourth mission below, including all dog tags and assignments. 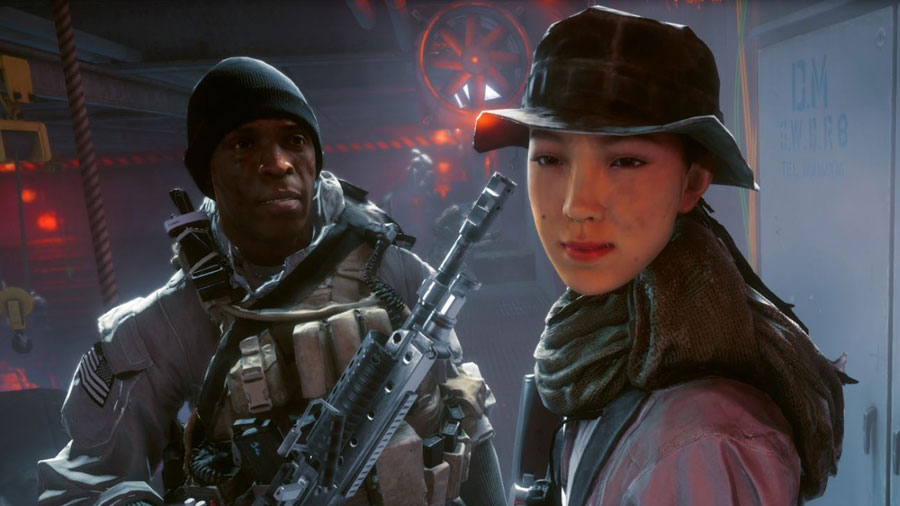 As the mission begins you're informed the Hannah will be joining Tombstone as the fourth member of the squad. Get into the RHIB boat and listen to Captain Garrison's motivational speech. When you take control head straight for the objective. No need to shoot or dodge, just drive. Once you hit land head straight for the Weapon Crate and take cover. Equip your preferred primary and secondary weapons and prepare for battle.

Don't worry about engaging the enemy here. Just move from cover to cover and mark targets for the tank. Pick of the stragglers with headshots and keep moving forward. When the cover gets scarce, take refuge behind the tank itself and continue towards your objective. After clearing out several waves of enemy soldiers the tank crew is wounded by an airburst grenade. Now it's your turn to drive the M1 ABRAMS.

Take control of the tank and switch on your Thermal Optics for an enhanced view of the action. Follow your two friendly pieces of armor until they are quickly destroyed. It's all up to you now. Don't rush forward. Hang back and let the enemy armor come to you. Depending on where you hit the Type 99 MBT it can take between two and four shots to destroy. There's a total of five Main Battle Tanks to take down in this area.

After the fifth tank and all the foot mobiles are down, head towards the parking garage. There's a troop transport on top of it. Blow it up before they get a chance to scatter and rain RPGs down on you. There will be a tank in the garage itself, destroy it and head inside. There's a mechanical blockade in the garage so you'll need to find the control switch. It's located on the north west corner of the first level along with the Weapon Crate and Gadget Stash. We would recommend taking both the RPG and M32 MGL grenade launcher. They come in very handy later on. With your weapons set and the barricade down get back in the tank.

As you exit the parking garage head to the left and around the mall. Do not drive through the middle, it's completely unnecessary. After you pass the mall you'll be at the edge of a park. Hang back a bit, there's a total of three pieces of enemy armor in there. Take them down one by one while inching forward slowly. When the third vehicle is destroyed head through the park and to the north. There's yet another tank up the stairs. Stay down below and wait for a clear shot. Once it's destroyed move up and deal with the foot mobiles. Take the tank as far as you possibly can until Pac tells you to proceed on foot.

Head up the stairs and take out the one or two Chinese soldiers waiting for you. Once you reach the top level you'll be looking down on three foot mobiles inside a cafe. Think about using your M32 MGL to put them all down with one shot. When the area is clear jump down and listen to more bickering from Irish and Hannah.

When you're able to proceed follow the road until you reach the bus. Enter and move to the other side. There's several enemy troops ahead, take them out with a well placed grenade or go for the headshot, shooters choice. Continue moving forward until you become trapped by the car. You will maintain some control here but it's a scripted event so your input has no bearing on the outcome. You'll eventually be knocked in the water. This is pure cut scene and you won't regain control until you reach the surface. When you can move forward again there will be two unsuspecting enemy soldiers ahead. They can be eliminated with on well thrown grenade.

Go inside and take the only route available. Climb up a series of ladders until you reach a room with a Weapon Crate and Gadget Stash. Double check your weapons, the game forced you to take a pistol for the last sequence so you might want to replace it. Exit through the only door and duck into the series of rooms on the left. You control this engagement so fire when ready. Stick to the rooms. Several times we had foot mobiles spawn directly behind us (in the room) and begin shooting. When the final enemy is down follow your squad to the hanger.

You'll enter the hanger on a series of catwalks. Stay up here. There's a Weapon Crate and Gadget Stash. Take out your M32 MGL, it's literally the only weapon you need for the first wave. Rain death and destruction down on any opposing forces. If you run out of ammo just head over to the Weapon Crate and refill.

After the first wave is down, head to the first floor of the hanger. Stick to the right side and use the cover. As you move up a second wave is triggered. Use your primary weapon as well as the M32 MGL to efficiently wipe out any resistance. When the final foe is down head to the hanger doors and open them. You'll be jumping aboard a Russian VDV Buggy (interesting) as the gunner. This is another scripted event, so once Pac pops the flare you can fire at the incoming enemy soldiers or you can just sit back and enjoy the ride.

As Tombstone are making their escape the incoming missiles take out their ride. When you come to Irish is performing CPR on Pac who appears to be dead. A few moments later Hannah approaches with three other Chinese soldiers, taking Irish and Recker prisoner. Back at the Valkyrie, Captain Garrison assumes that if Tombstone is still alive they'll never be heard from again.