Pretty much everything I've seen of Anthem so far has left me unsure about the game - which is why I was particularly surprised when I went hands on and fell in love immediately.

In fact, the decision of EA and Bioware to keep this year's Anthem demo mostly hands-off and mostly under wraps at this year's E3 is one of the most perplexing ones I've seen in ten years of going to the show. While Anthem had a lukewarm sort of showing at the publisher's EA Play event followed by fan belly-aching about similarities to Destiny and a lack of traditional Bioware romance and character-driven stories, the company sat on a kick-ass demo that could well have changed minds.

A few people did get to play Anthem at EA Play, but it was limited to a very small handful of people. It could also be seen in a very limited capacity at E3, where a marketing tie-in with graphics powerhouse Nvidia meant it was playable by appointment in their private meeting rooms, running at 4K and a nearly rock-solid 60fps on their face-melting graphics hardware. From those I've spoken to, there's a common thread among pretty much everyone who ultimately got to play those Anthem demos: they understand the game now. 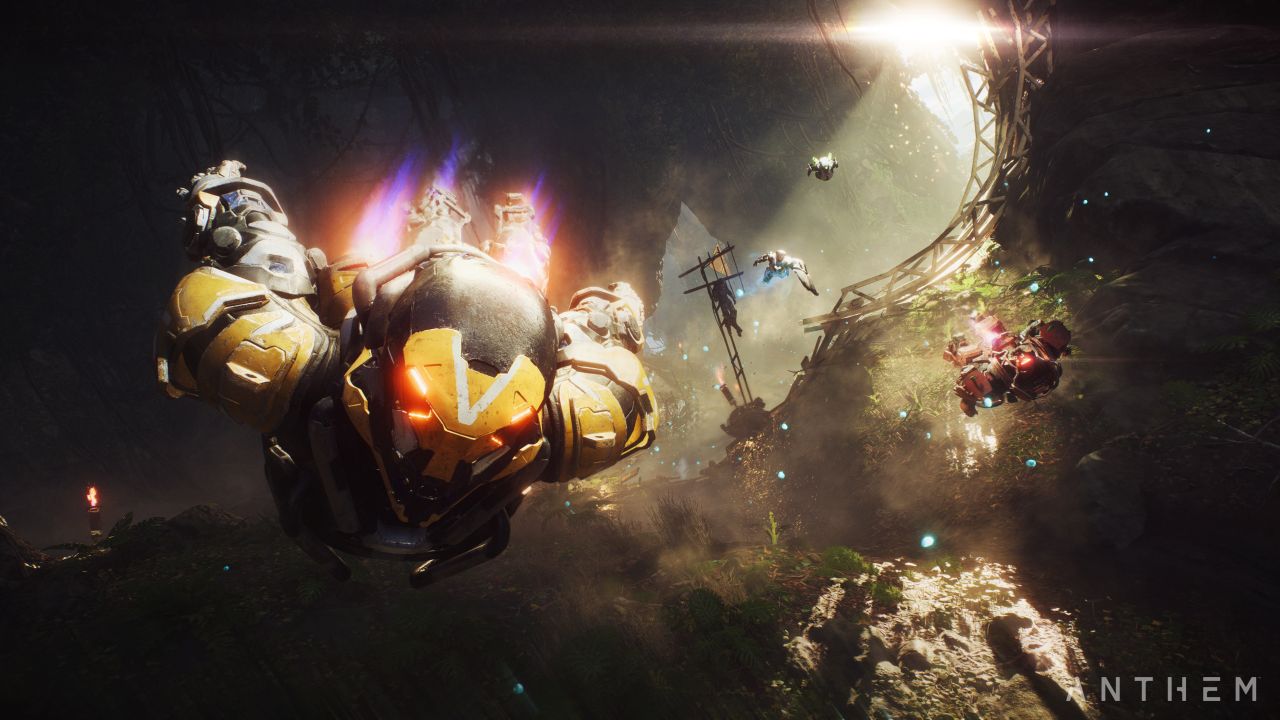 A big part of it, I think, is down to Anthem's movement. As even the most cursory glance at the game will tell you, it's all about jumping into mech-like suits of power armor that give you the strength, speed and abilities you need to survive out in the wild wasteland the game is set in. These suits are probably one of the aspects of the game most to blame for the endless Destiny comparisons, but when you look past the design and focus on the function in-game it's probably better off compared to Tony Stark's Iron Man armor. In a way, Anthem is the Iron Man game I've been waiting for since being wowed by how that hero moved in the 2008 movie.

This is when it feels its most special - you can click in one stick to put yourself into a hover state when in mid-air, while clicking the other stick puts you into a full-on jet mode which basically allows you to fly around like you're straight out of After Burner. You can toggle between these two or initiate them any time your feet aren't on the ground - so during free fall, while jumping, all that.

This is absolutely key to why Anthem feels so good - it's all about that movement. These simple, intuitive controls are backed up by pretty familiar third person action controls (class-unique abilities on shoulder buttons, aiming and firing on triggers), and that meant that I picked things up and was zipping around the battlefield in a way that felt incredibly bad-ass in no time.

There's something about this deeply vertical and traversal combat that just... well, it rocks. To come back to Marvel, it does feel like some of those action sequences in the Iron Man movies where Stark is constantly under fire from a barrage of enemies, forcing him to stick and move, activating thrusters only at the last minute to get out of the way of danger. This feels especially pronounced when fighting the boss, which wasn't properly featured in the EA Play demo streamed to the public. A huge, lumbering beast, it has weak points that it is rather careful to guard from its front. That's fine, though - you can distract it, jet around the back, pop into a hover and loose a bunch of rounds into it before it can react. Getting airborne is practically a necessity, too, since the boss summons ground-based minions as well in an attempt to overwhelm you.

It feels good! It's really confusing that EA didn't want more people to play this at E3 - it feels like word of mouth and buzz about Anthem would've been much stronger if they had.

Other things did come across just fine in the extended hands-off gameplay I saw in the wake of EA's conference a few days prior. Back then I described how I could see more of a lineage from Mass Effect's multiplayer mode than from Destiny in Anthem, and, well, I hate to say I told you so but... it's true. The way you can combine elemental attacks together to cause 'combo' explosions that then deal huge amounts of damage to enemies trapped in their grip - that's very Mass Effect multiplayer. It all makes sense, mind - Andromeda came from a splinter team, while what remains of the old Mass Effect Trilogy team moved on to create Anthem.

You can tell these games are siblings, and even some of that oh-so-satisfying rapid movement with the jetpacks and boosters feels like it's evolved from some of the increasingly wild movement options given to biotic classes in that game. The general flow of combat smacks of that series and its online too - but people are always going to be quick to make the Destiny comparison thanks to the home hub into raid-style quests structure of the game and some character design work that does feel a little Destiny-esque. It is ultimately a very different beast, mind. Playing makes that much abundantly clear.

Bioware still has a lot of questions to answer. The combat works, but fans have every right to be up in arms about the other aspects of Anthem not looking enough like a Bioware game. Hardcore Bioware devotees want to know if they can expect to feel the same level of emotional attachment to the characters and story of this game - and that's something that other semi-online shooters like Destiny and The Division haven't really delivered on. Those are questions Bioware must work to answer as Anthem boosts towards its February release date - but in the meantime rest easy on one thing, at least - it plays brilliantly.