We’re still a good few weeks away but the Best Buy Black Friday ad is already out there showing off some incredible PS4, Xbox One and Nintendo Switch offers we can expect to see for Black Friday 2019.

It’s a really strong list full of some seriously good deals – especially if you’re looking to pick up PS4 or Xbox One this Black Friday. There’s loads of money off two stellar console bundles, plus many of the best games you can buy for each system. You can also see the early Xbox Black Friday deals that Microsoft announced last week. 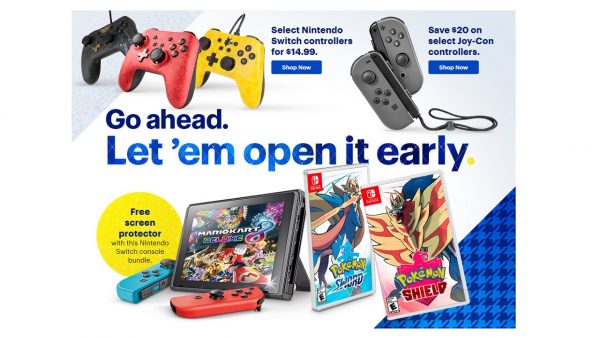 Things are a little more reserved for the Nintendo Switch, however. There’s a good bundle there with Mario Kart 8 Deluxe for a fairly predictable price. The games are where the big savings will be found, though, with almost all Switch first-party exclusives reduced to $40 or less.

Here’s a closer look at some of the standout gaming deals I’ve spotted in the advert:

Definitely take a look through the entire Best Buy Black Friday ad for yourself to find even more gaming and console bargains. That’s not just it, though, as you can find loads in other categories such as TVs, laptops, phones and so much more.

You can also bookmark our PS4 Black Friday, Xbox One Black Friday and Nintendo Switch Black Friday deals hubs too. You’ll find all these Best Buy Black Friday offers in there once they go live, plus any other bargains we find from across the web.

Think you’ll be picking up any of these, then?