Looking to get the best ending in Red Dead Redemption 2? We’ll lasso you around the head and pull you in the right direction towards the game’s climactic finish.

Obviously, spoilers for Red Dead Redemption 2 follow – big, whopping spoilers that you won’t want to read unless you’re really looking to get the best ending and not be disappointed when the credits roll.

Right, our cowboy gloves are off. You’ve been warned.

During Arthur’s final mission in Chapter 6, you are presented with a choice: help John or follow the money.

If you decide to help John, you will fight your way up the mountain with him before agreeing to hold off the Pinkerton agents to allow him to escape.

Once you’ve fought them off, Micah will turn up for a scrap. Arthur still dies if you win the fight, but he gets a peaceful death, looking out over the mountain.

Go for the money

If you go for the money, it plays out largely the same. The difference is that you fight back to the camp and head into the cave for the money. On the way out, you fight Micah in the burning remnants of the camp.

Which Red Dead Redemption 2 ending is the best? 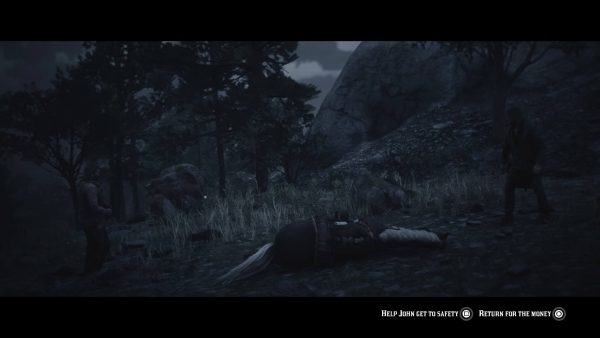 While they’re both similar, helping John feels much more in line with Arthur’s character at this point. He’s seeking redemption, he’s a dying man, why would he even need the money?

If you’re looking for a bittersweet payoff, I’d recommend going down the John route, which seems to be the canon choice – after all, it’s the option the game selects if you don’t choose.

Arthur also makes it clear throughout the story that he isn’t a fan of revenge, so why would he go hunting for Micah instead of helping his friend? Exactly. You know what to do.

Once you’ve done this, the game isn’t over – you still have two entire epilogue chapters where you play as John Marston. Still, the end of Chapter 6 is the end of Arthur’s story, and John’s chapters are much more linear. Now go have a cry.

Red Dead Online will soon be available for most players, so here’s Red Dead Online beta guide, with tips and tricks to get you started in the single-player story missions and multiplayer modes, character customisation and more.