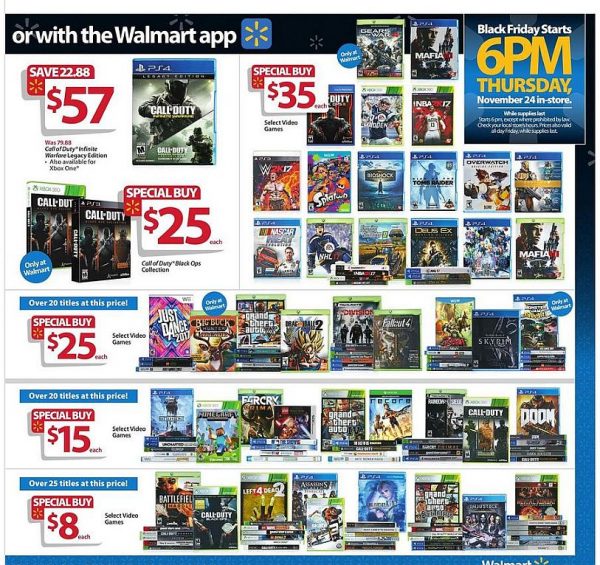 If you want to keep up with all the deals this holiday shopping season be sure to keep checking our Black Friday posts.

The Black Friday Sale starts at 12.01 ET through the store’s website on Thanksgiving Day, which is Thursday, November 24. All deals are valid while supplies last.

Let’s start with the games Walmart will have on sale first. There will be close to 90 title on sale, starting at $8 each.

The following titles are on sale for $35 each:

Grab the following titles for $27 each:

Grab the following titles for $25 each:

The following titles are on sale for $15 each:

These titles are on sale for $8 each:

If you are interested in buying an Xbox Gold Subscription, you can pick up a six-month sub for $25 and get a free digital game code for Lovers in a Dangerous Spacetime.

The is also a Guitar Hero Live pack for $49 and it comes with two guitar controllers for both Xbox One and PS4.

Walmart is kicking off its Black Friday deals starting today for those who have installed the Walmart app. This includes the Xbox One S 500GB Minecraft bundle noted above, so if you want the bundle and wish to beat the crowds, this is the way to go.

Like Best Buy, Walmart is also offering $50 off the regular price of any Xbox One console. This is a Microsoft discount, so you will find the majority of retailers which sell the console offering the same discount.

Xbox One and PlayStation 4 controllers are also on sale for $39 each.

There are also Turtle Beach headsets on sale, along with Skylanders and LEGO Dimensions starter packs.

The entire Walmart Black Friday 2016 ad is now available for those who have the Walmart App.