Don't get the hump - smash this camel's mechanical puzzles. 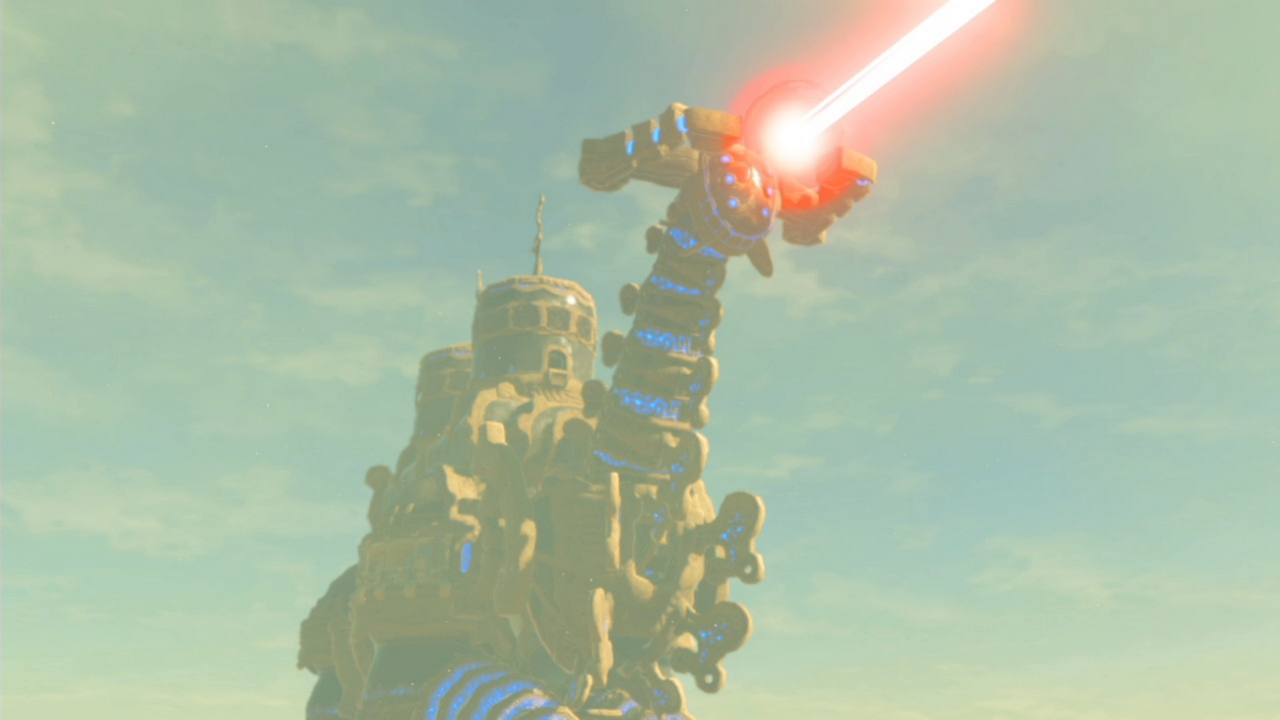 After taking down Divine Beast Vah Naboris' feet with bomb arrows, the time has come to finally board. Gerudo leader Riju won't come with you and so Link, once again, finds himself alone on a Divine Beast.

In traditional Zelda this would've been called a dungeon or a temple, but the Divine Beasts in Breath of the Wild are decidedly different... beasts. Some similarities remain - you still have a series of puzzles to solve and there's still a dungeon theme - in Vah Naboris, electricity and lightning. For my money this is the hardest of the main dungeons.

First thing's first: once inside Divine Beast Vah Naboris you need a map. Once that's done you'll get a nifty 3D map view of the dungeon which lays out your five other objectives: five terminals scattered throughout the beast. The dungeon layout is more open than typical Zelda levels, so the challenge is instead in lateral thinking and in using the dungeon space to your advantage.

Once you have the map downloaded to your Sheikah Slate you'll be able to make Vah Naboris' move three different segments of its body as you tumble about in what is basically its tummy. Take note of this, since it's vital to getting around the dungeon and solving puzzles. This means the map is a must.

Inside Divine Beast Vah Naboris: Getting the map

Once you finish hearing from the Gerudo Champion, head to the entrance of Vah Naboris. There's a weak guardian here - smash it, then head up the ramp. You'll find the purple Ganon corruption gunk blocking your path - shoot the eye to the left to take it out and clear a path.

Walk through the large room, which holds a clue as to the nature of the puzzles here - there are electrical circuits everywhere - and then head to the very back. At the back of the room on the far right, against the wall, there's a ramp. Simply walk on up and download the terminal to get yourself a map for Divine Beast Vah Naboris.

You'll see that for this beast the control you have over it comes in the form of rotating the main body inside 90 degrees. The body is split into three sections, and each can be rotated. If you've done other dungeons you already know the drill here: we now need to find five terminals. 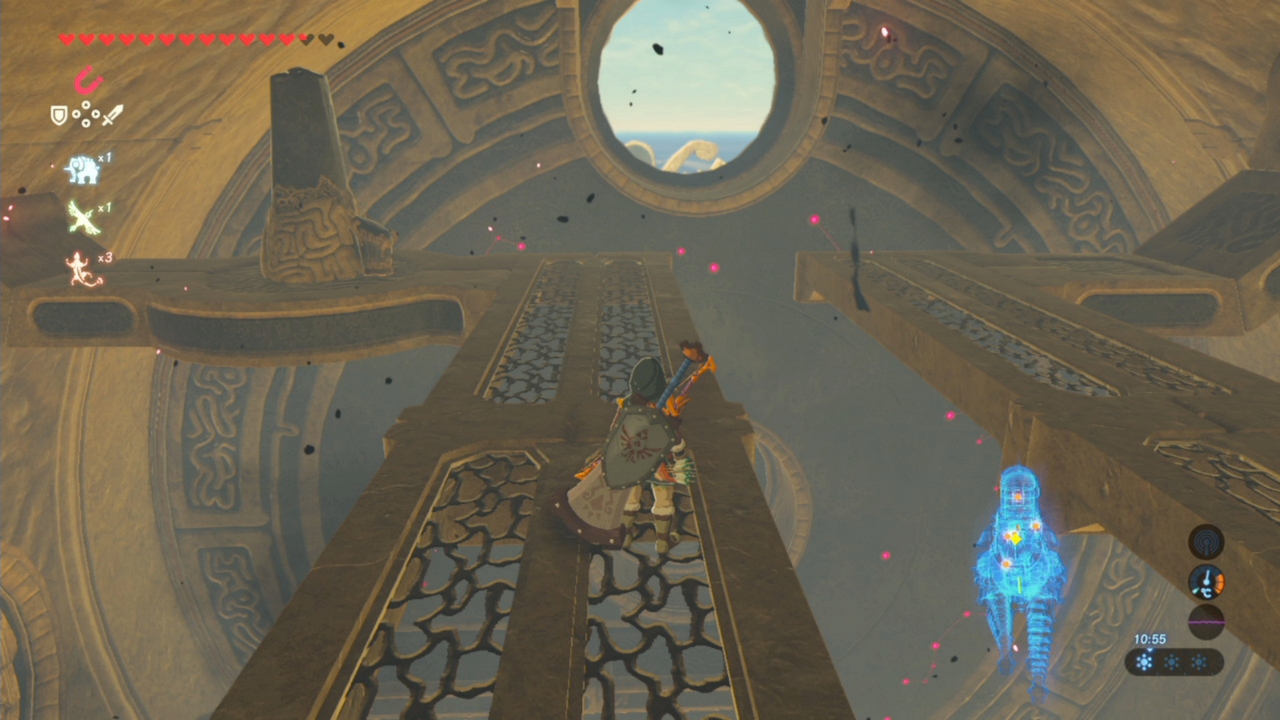 Walk out of the map room and stand on the ledge, but don't drop down. Rotate the middle section of the Naboris until you can see two chests, both on their sides, attached to the central platform. Now run down and stand at the foot of that central platform - where you'll be safe, to the side of the central column - and rotate the beast.

You'll now be at a height you couldn't reach before, but who says that's enough? Walk forwards towards the middle, where there's another safe wall, and rotate again. You'll get even higher up still.

Now walk out the new the ledge facing towards the head of the divine beast. Rotate that front section twice. In front of you and to the left is your first terminal. Nailed it!

Head back to the map room and stand in the circular entrance to the room. Rotate the middle platform until it's reset so the two chests are in the middle of the room on their sides again.

Once again step down into the middle into the safe spot then rotate the middle platform again.

Look back to the map room. On your left there's a platform with a hole. Paraglide over, head through the hole, face back towards the room, and rotate the rear segment of Vah Naboris twice.

When rotated twice, you'll see the terminal right in front of you, but the wrong way up. Step inside and rotate once more to right it. Be careful of the Ganon corruption - grab Terminal 2. 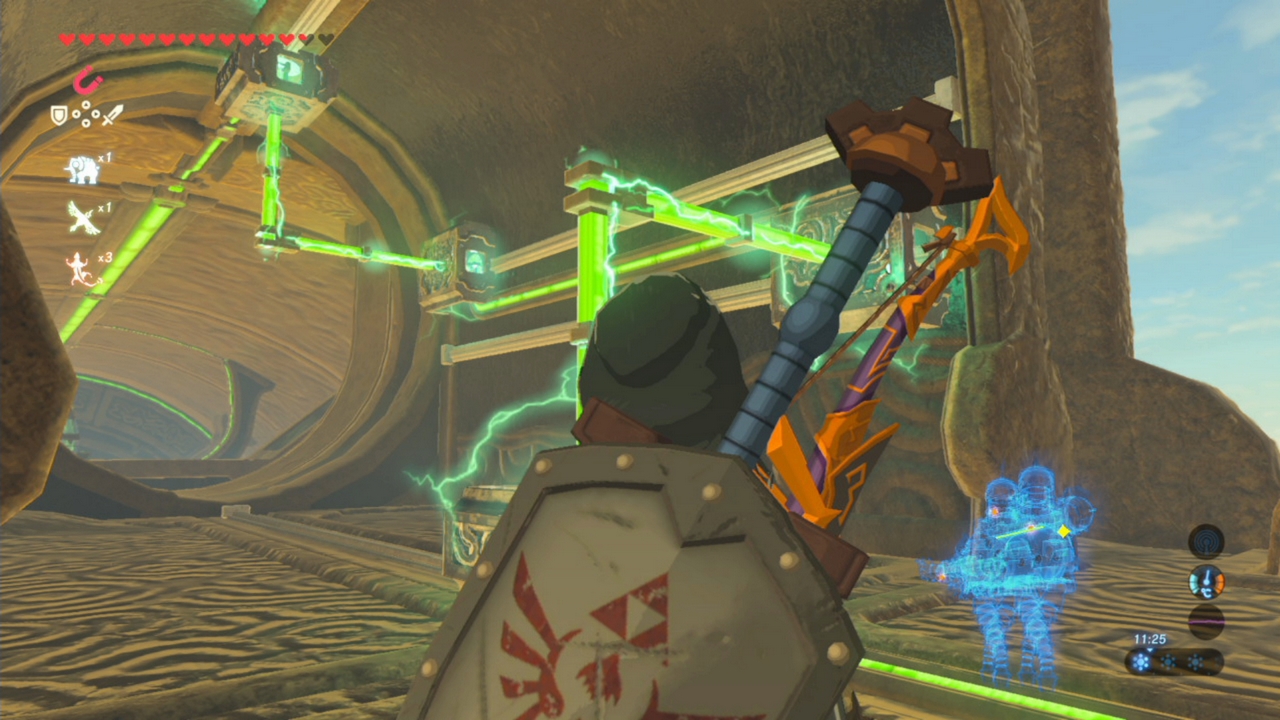 Rotate the back section of Vah Naboris several times to get access to the hole once again, then rotate several times more until you can step back out into the central chamber.

Look out to the room. On your left, above the map room, there's another ledge. Rotate the rear section enough times and stand in the right place to reach that platform (stand so you end up on top of the box room terminal 2 was in) then step into the circle doorway area that doesn't rotate.

Now look at the map screen. Look at the lines in the rotating sections - these are the electrical circuits. Rotate them all so they make a line at the top of Vah Naboris' back - along the spine, if you will. The far end will rotate, but don't worry about that yet.

Just here in front of you are some metal objects. Break out that Magenesis rune and shift them about so that you further create an electrical circuit. This will raise the tail.

We don't actually need the tail raised right now, but leave the magnesis blocks in place. Instead, break the circuit by rotating any piece of the body.

With the tail down, walk out onto it and look behind the tail. there's an electrical circuit thing, but more importantly this is a safe place to stand while the tail raises. Rotate the piece back to make the circuit again, stand here, and enjoy the ride.

At the top, shoot the eye. You may have to shoot it twice - once to open it and once to kill it. That gets rid of a ton of Ganon's corruption. Head inside. There, shoot another eye. This will activate an elevator.

Drop down the elevator shaft. Take out the corruption in this room and then get on the elevator. As it climbs there are two platforms opposite each other - one with a chest, one with an electrical current conducting ball. Open the chest, then grab the ball and hop on the elevator.

Walk towards the head of the Divine Beast Vah Naboris. As you pass the electrical bulb thing, the ball will light up. It's activating an elevator! Set it down and take that across the otherwise impassable gap.

In this room there's a guardian. He's sitting on an elevator. Smash him, then let the elevator rise without you.

Directly in front of you towards the head is the next terminal, but it's covered in corruption. Wait for the elevator to rise or fall, then aim towards the terminal with your bow and look down... just below the lip of the elevator 'shaft' is the eye. Kill it and grab terminal 3. Phew! 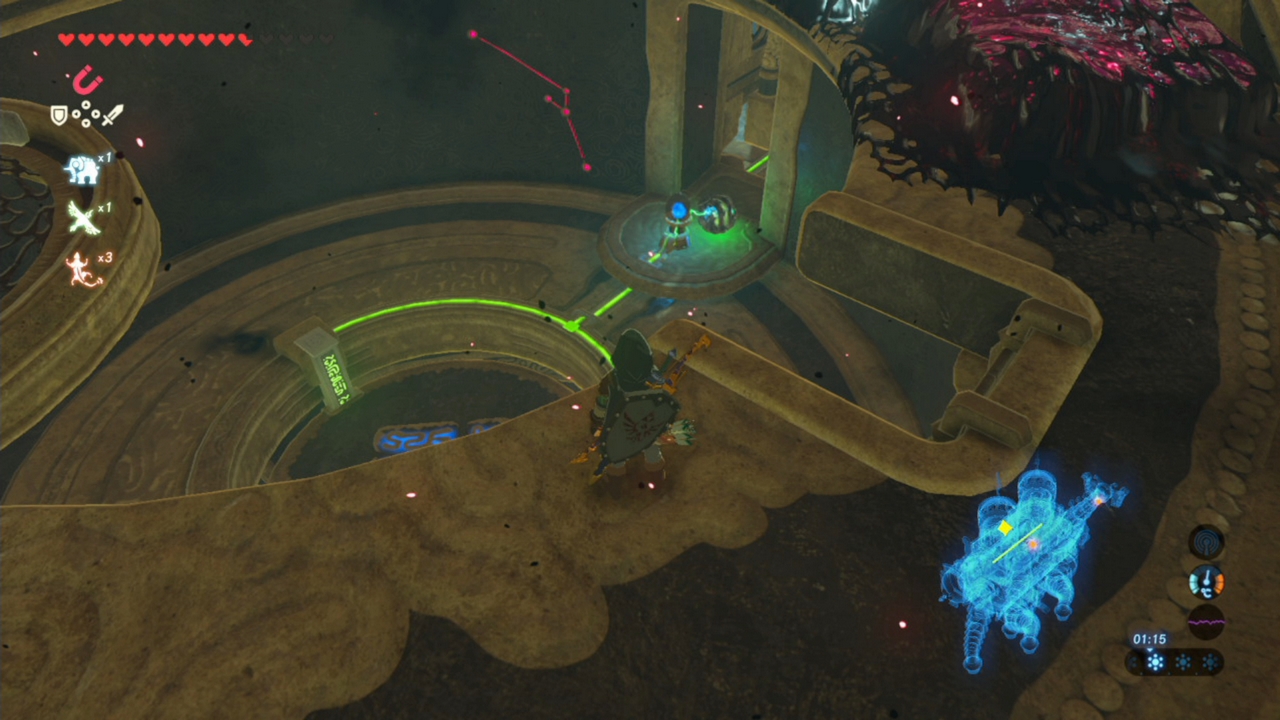 Look back the way you came, where the elevator is moving back and forth. Look down there... there's a hole! Drop down, then through the hole. There are two guardians in here; take them down.

This opens grates to the circular rooms with the elevators in each of the humps.

The task now is simple: you already have one ball - go retrieve it and put it on the first plinth.

The second ball is in the top of the front-most hump; go retrieve it and take it downstairs, again putting it on the available plinth.

A grate drops; this gives you access to terminal 4. We're almost done with Vah Naboris. It's all downhill from here - or, well, almost.

Head directly from terminal 5 out to the front hump, the lowest floor. Look out towards the head. Drop down. There's a wheel you can push here. Pushing it in one direction will make one wheel on one side turn; the other the other wheel.

Push one direction to line up the bulb with the circuit, then do the same in the other direction. This raises the head and lowers an elevator that goes right up Vah Naboris' neck. Take the elevator up.

At the top of the elevator is Terminal 5. We're almost done here!

Float down from the head back to the wheel, then climb up and through the entrance. Coming in this way you can safely glide to the second chest from the start if you rotate the body once. 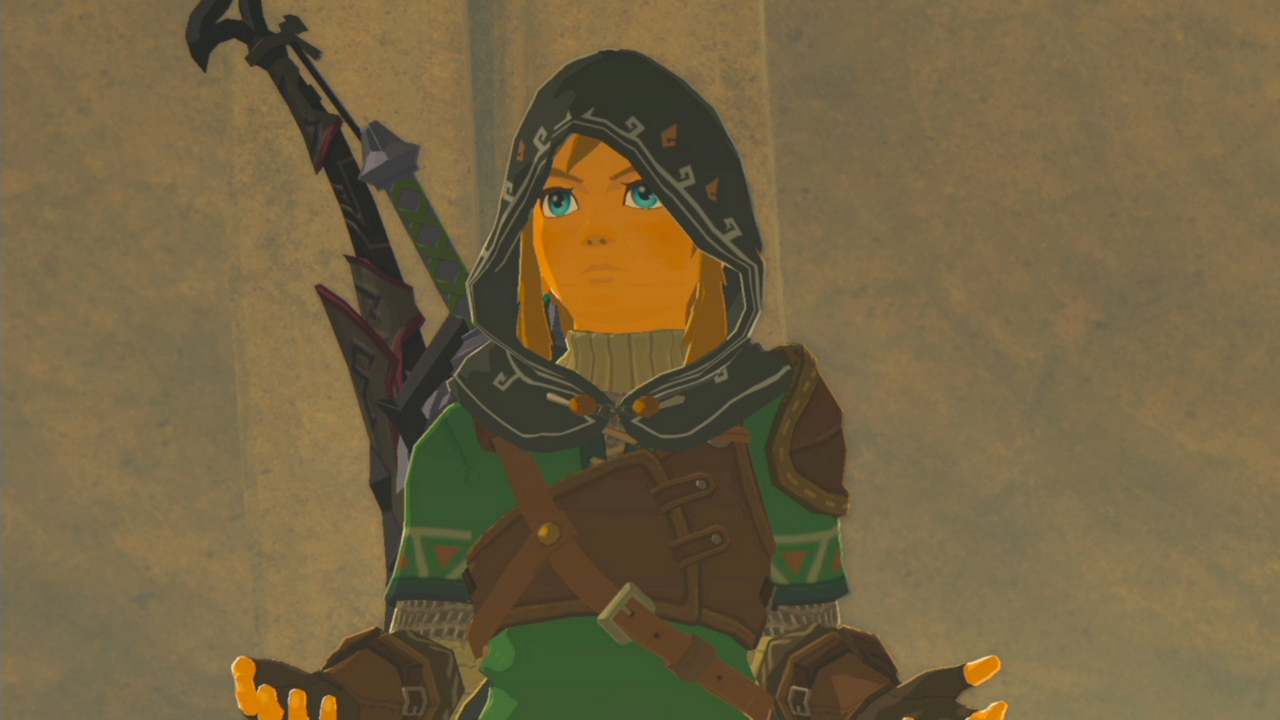 I wasn't a big fan of this boss. Thunderblight Ganon has a sword and a shield - the shield makes it hard for you to get in and the sword does absolutely enormous amounts of damage. It's a bit of a pain. Honestly, if you don't have the Master Sword this one might be a bit of a slog. I was lucky enough to have it.

In Thunderblight's first stage, get in close and do one full combo to make his shield disappear. Regular length swords are best for this - they hit faster. Don't forget that if you have the Master Sword it does double damage. Once his block is down go to town with a second combo, but always be mindful and be prepared to block if necessary. Never do more tan one landed combo on him in a row.

The second phase sees Thunderblight smash pillars into the ground and then strike them with lightning. Wait for pillars to smash, dodging them with a run. Get to a safe distance then pick up one of the pillars with your magenesis rune. Smash it into him, like we did to the leader of the Yiga Clan not long ago.

Thunderblight will fall to the ground when you touch him with a pillar, so get in close and hit him hard when he does. If you're lucky you'll only have to do this once, then we're on to phase 3.

Phase 3 is all-out war - the pillars are gone, but it's a souped-up version of phase 2 where it's even harder to land attacks. Follow the same rules as phase 1, but be even more careful. If he begins charging his Guardian style laser, consider hitting him with powerful arrows or running in close to go wild with a blade.

Eventually he'll drop. As a reward you get Urbosa's Fury, a new special move that summons a powerful lightning strike to an area. You've also liberated Vah Naboris!