Tony Hawk's Pro Skater 1 + 2 has a handful of secret unlockable skaters for you to get your hands on, but it's the secret Roswell Alien that's the hardest to get hold of.

Once you unlock the Roswell Alien you'll be able to play as it, and it comes with its own deck and special moves including Warp Speed, Beam Me Up and Telekickflipsis. It also comes with fully maxed out stats.

In order to unlock the Roswell Alien you'll need to collect all the alien plushies in Tony Hawk's Pro Skater 1 + 2. There are 19 in total, with one dotted on each level. These alien plushies are difficult to spot as they're much smaller than any of the other icons on the maps like the S-K-A-T-E letters or Stat Points. To make it even harder, they're hidden away in corners of the map you wouldn't usually roll over. Counter-intuitive to the game, none of the plushies are at the end of a grind, gap or ramp. Once you spot one, it's best to approach slowly and cautiously. Look out for drifting smoke around the plushie, and once you roll over one you'll hear a weird noise as the alien bursts with a splat.

It's also worth noting that the alien plushies only appear in Skate Tours mode, not Free Skate or any other, so you have two minutes to grab them.

Where to find all alien plushies and play as Roswell Alien

This little green fella is on the right hand corner of the ramp that sits on top of the other ramp. As you roll in, it's to your left and behind you. 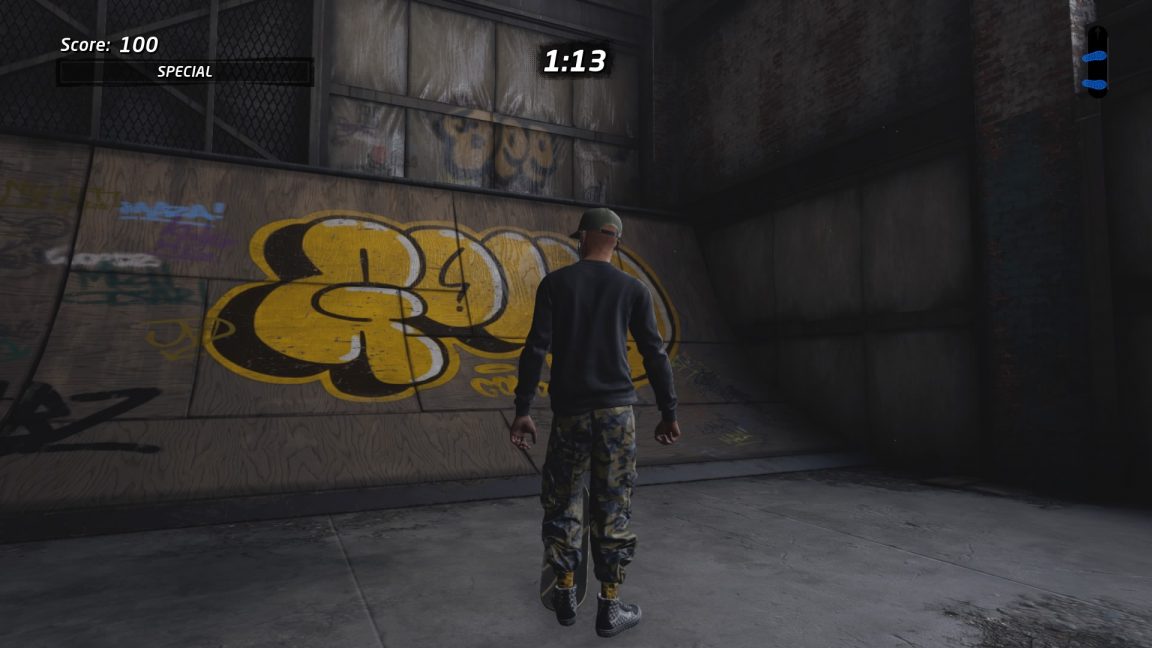 This one is easy to find. Instead of rolling in off the awning, immediately drop to your right and into the dark corner of a couple of buildings underneath the awning. You can barely see it, but hit the corner and you'll squish the alien.

After you grind the coffee grind gap rail and roll down a ramp, slow down and turn immediately to your right. You'll see the alien plushie in a corner next to a door with a Parking sign. 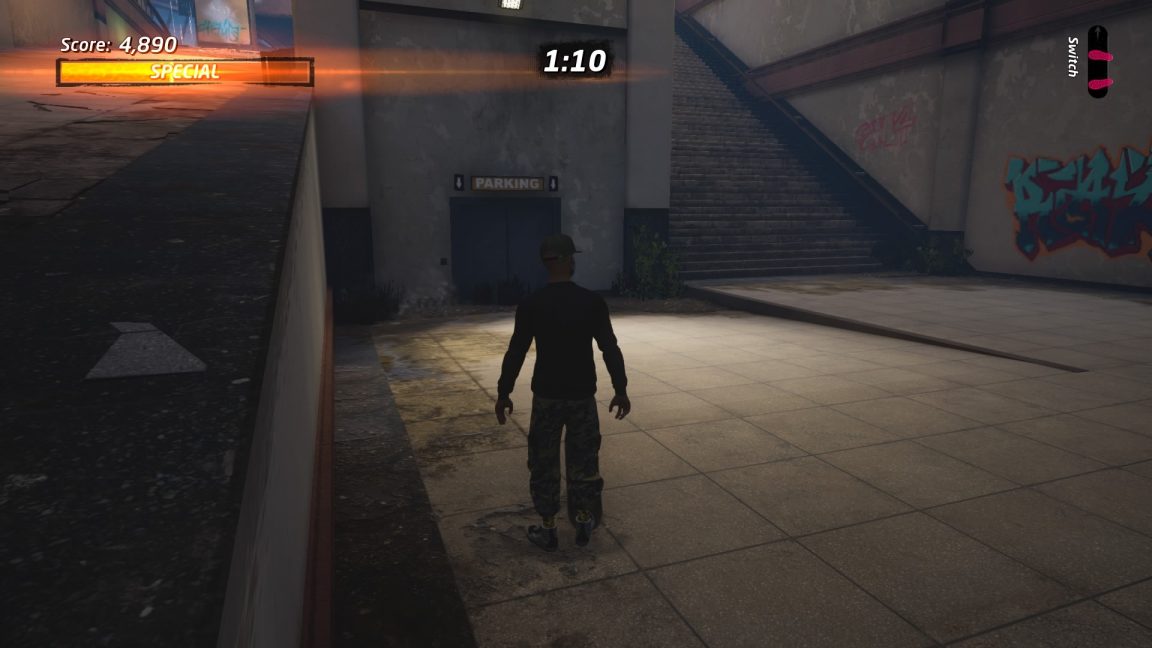 Another awkward spot to reach but it's at least easy to work out where you need to go. This alien plushie is hidden next to a steel beam on the roof of the judges viewing box. It's directly behind you as soon as you start your run. It's on the roof above the box with all the Vans Park Series posters on it and there's also a Stat Point up there. 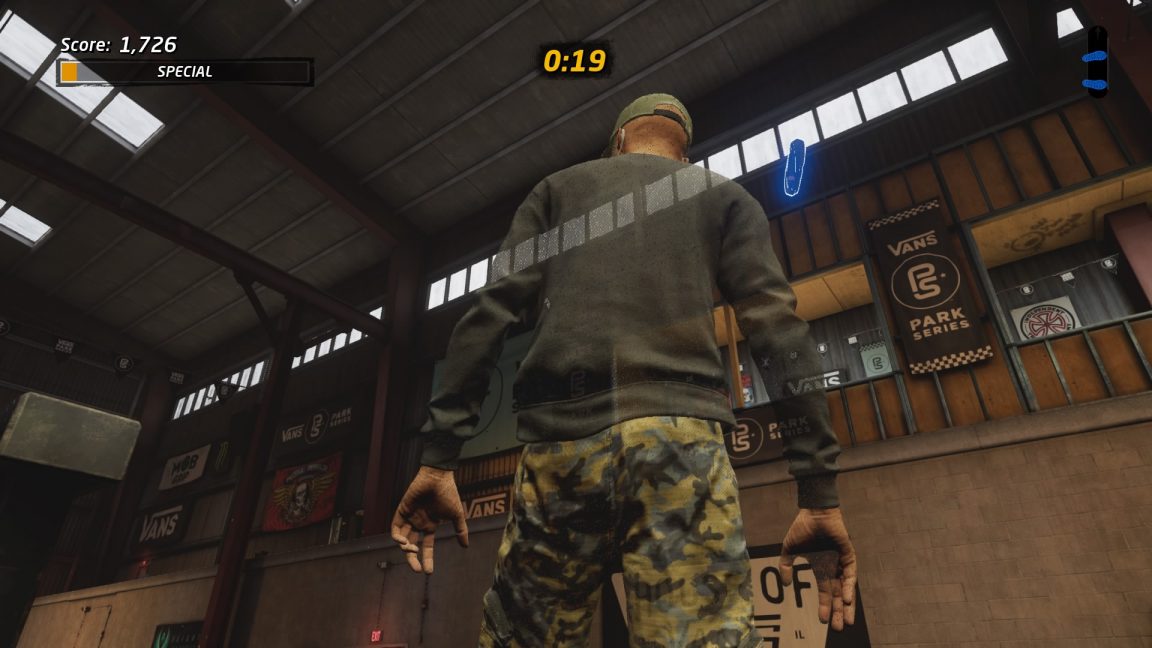 This alien plushie is on the rooftops. Head up to the large vehicle transporter, which takes you around a curved corridor and onto the roof. Enter the wooden bowl on top of the roof and as you roll into the bowl it's behind the bowl's right hand far corner on a triangular bit of roof. 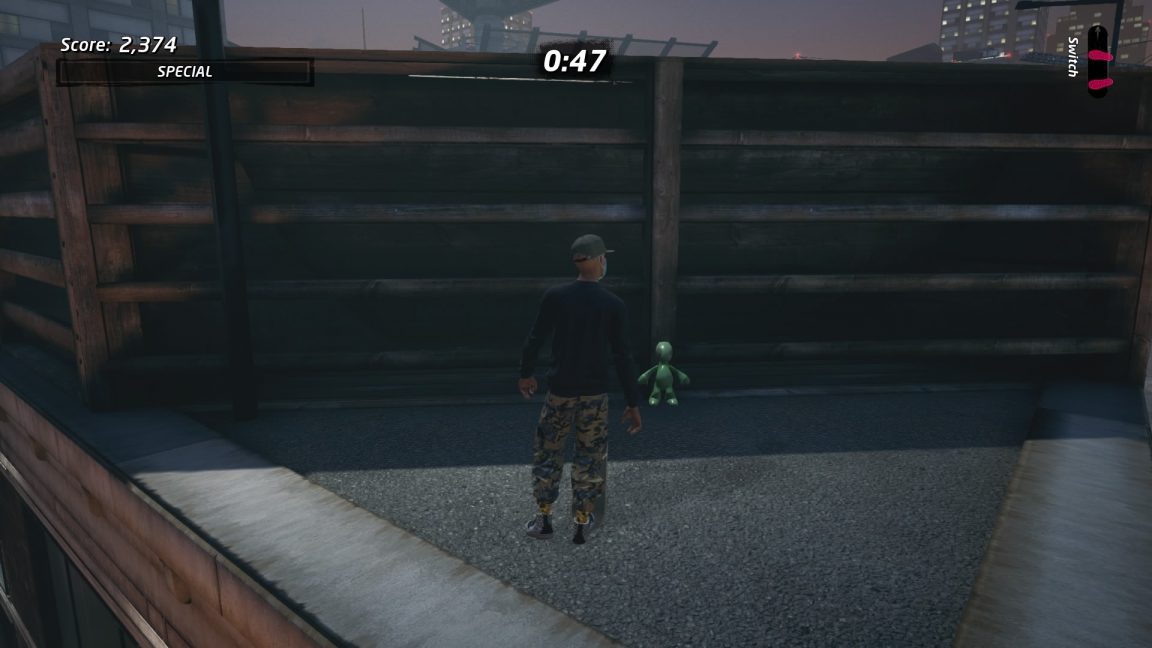 Stop! Don't roll down the hill. Immediately turn around and you'll see this little alien plushie at the very start of the level in the right-hand corner. Cheeky.

Look up at the concrete supports at the top of the map. You'll need to transfer up there and you'll find the alien plushie wedged between a triangular support.

This alien plushie is behind the sign on the roof of a store - look for the store with the American flag flying above it, and the small glass room with the checkerboard tile floor.

Of course there's an alien plushie in Roswell. He's in the secret bowl room - the one with the tank and flying saucer behind glass screens. You'll find him right behind the door as you enter the room, at the top of the bowl in the left-hand corner.

This alien plushie is outside in the secret room you open by grinding the helicopter blades. You'll find it outside in the snow-covered space in the left-hand corner in the dark. 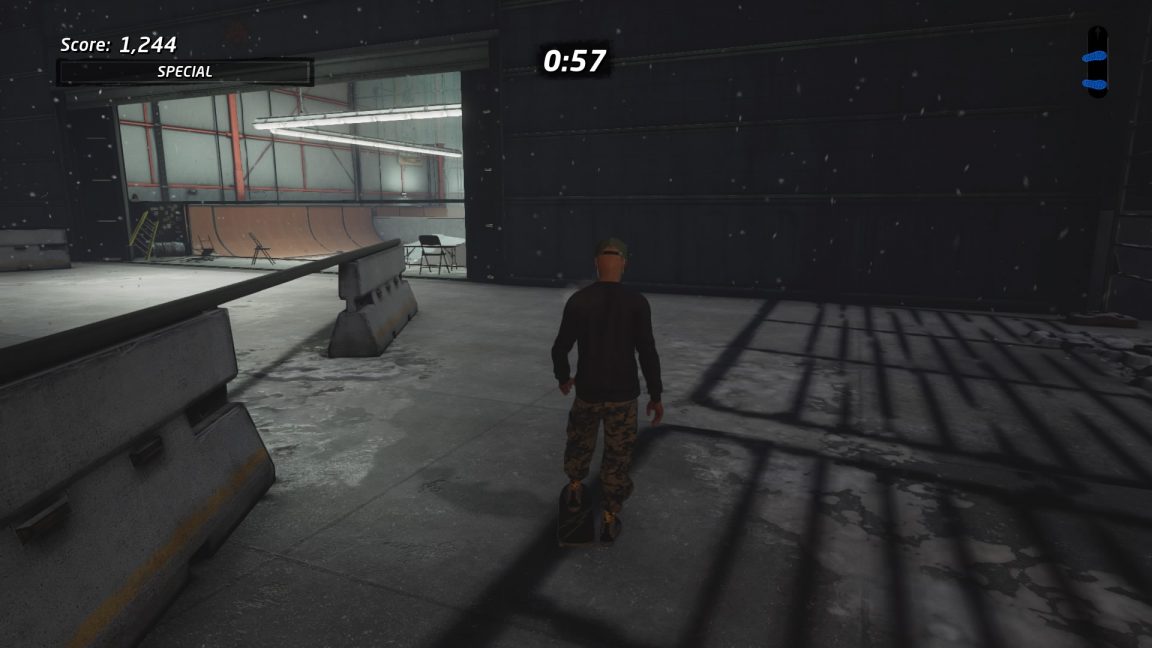 Immediately head down the path on your right to the large courtyard with the ramp. You see where the Stat Point is on the green awning at the side of the courtyard? You need to get up there (grind the lockers then ollie up). Along the awning is a little recess and the alien plushie is there. 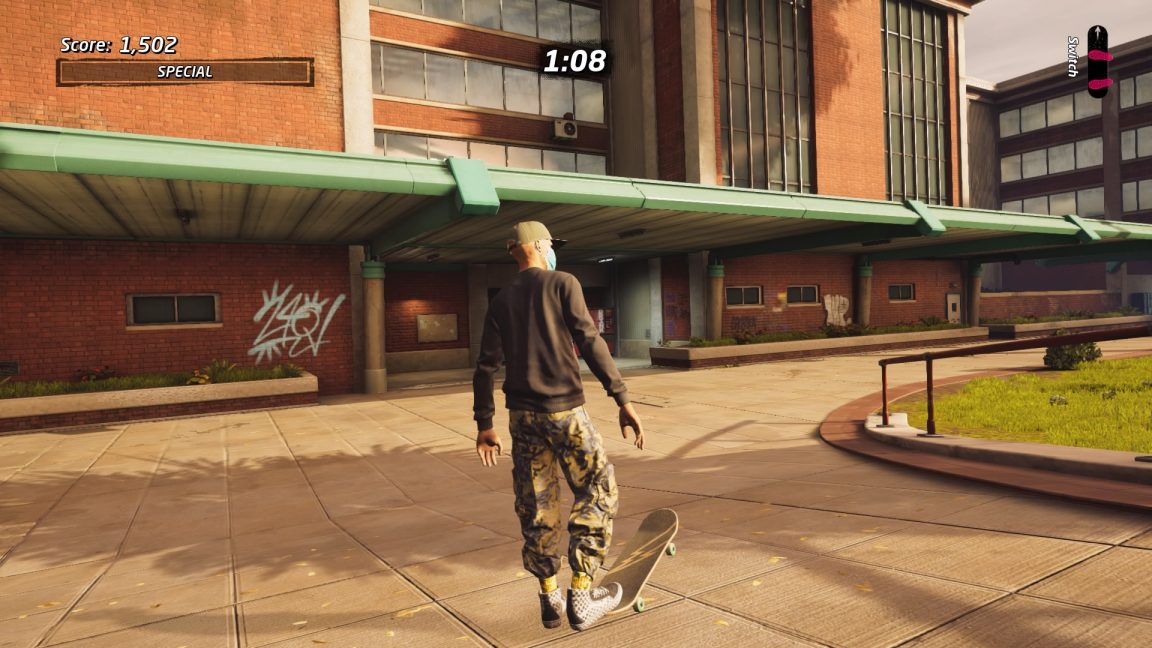 Remember you only have one minute to get this alien plushie. Head towards the concrete transitions with the black and white graffiti on them, and go past that until you reach a grass wall and some wood covering up part of a wall. Wallride it and the boards will crack, leading to a secret crypt. You'll find the alien here on a small raised platform in the middle left of the room. He's tucked away in a corner. 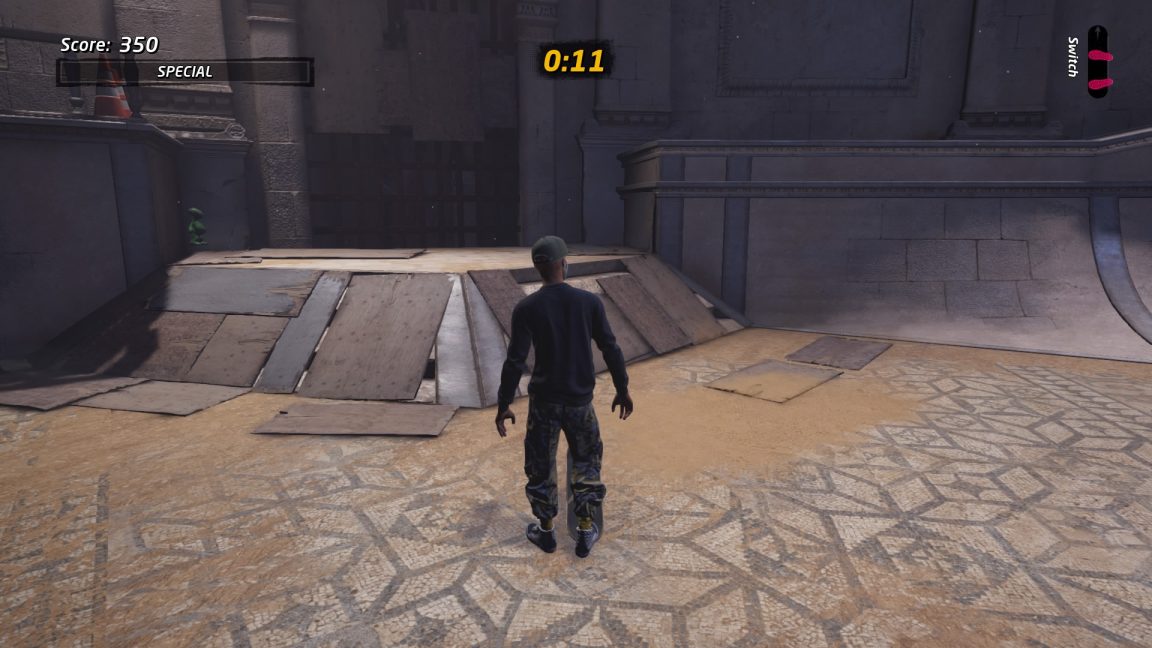 This alien plushie is fairly easy to find. You see the big Joey's Sculpture you need to 50-50 as a challenge? Below that is a little wooden quarter pipe. Behind that quarter pipe you'll find the alien plushie, which is fairly well lit. 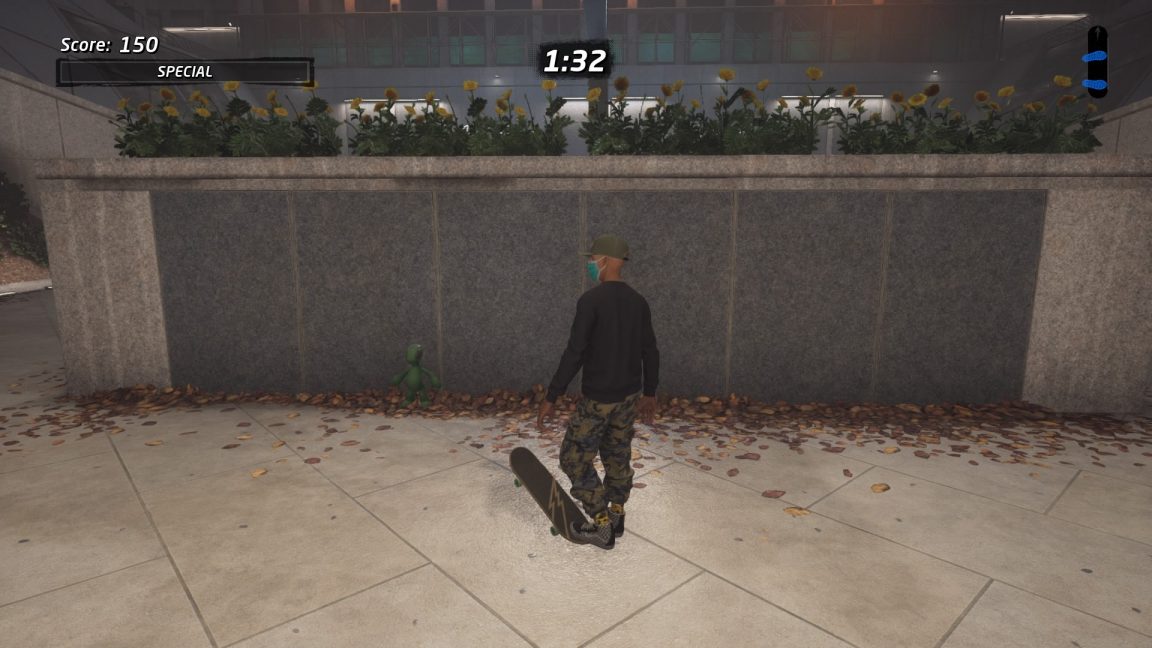 Head to the back of the concrete bowls on Venice Beach where you'll find a little wooden boardwalk at the edge of the map. Follow it around as it curves and you'll find the alien plushie wedged between the back of a concrete quarter and the wall, just under some blue ghost graffiti . Remember if you touch the sand you'll be teleported back to the start so be careful.

This one is a pain to find and a pain to reach. You'll first need to grind a hanging rail to access the secret area outside. Against one wall are two separate quarter pipe ramps with a gap in between. Head to the one in the right-hand corner and ollie up and off it to land on a small ledge on the right. This is where the alien plushie is hiding.

Begin by grinding the telephone wires which pull down the barriers to the area underneath the freeway. Behind the big DIY wooden half-pipe with the steps you'll find the alien plushie just sitting there underneath those steps. The light is bad so keep your eyes peeled.

This is fairly easy to grab. You'll find the alien plushie on the raised outer circle, just below the seats. Follow it around and hug the path to find the alien just before the curved launch ramp that launches you into the actual bullring arena.

The alien plushie is next to the roll in on the big-assed steel half pipe that stretches across the ship.

You'll only unlock Skate Heaven once you've completed every goal in the Tony Hawk's Pro Skater 2 tour. First you need to activate the volcano by grinding over the gap on the neon blue rail. Then take a leap of faith into the actual volcano, which transports you a secret location. Head to the edge of the map (try not to fall off) and the alien plushie is hiding behind a dull looking small wooden quarter pipe.

If you're having trouble finding the plushies, this quick video from WorktheSpace is also handy for getting an overview of the alien plushies.

If you've got all 19 plushie aliens you now just need to redeem the Roswell Challenge and you'll unlock the creepy looking fella. Have fun!

Here's our review of Tony Hawk's Pro Skater 1 + 2 in case you're on the fence about whether to buy it or not.