Thief might look shiny on PS4, but Phil Owen played it at E3 and found the game's stealth mechanics to be quite disappointing. Producer Stephane Roy told him why realistic stealth wouldn't be all that fun in a game setting.

As we enter a new generation of gaming, immersion is key for the AAA space. We have the power to build whatever experiences we want, and when you're harnessing the power of a next-gen console or high-end PC for your game, you've gotta actually use the tech.

Mechanics are super important, yes, but there's little reason for those mechanics to not jive with what you're actually seeing and hearing. I'm not crying to every big game to adopt a semblance of realism, but I do want to be able to take seriously what I'm looking at when I play one of these experiences that somebody dumped tens of millions of dollars into.

Unfortunately, when I was playing the Thief reboot at E3 on an actual PS4, I had a hell of a hard time buying into what Eidos Montreal were selling me. It's not that the game is necessarily bad or unenjoyable.

I expect that if I were to play the full game, and I will, undoubtedly, I'd become accustomed the the way the game works and just go with it. But, because I only played the thing for 30 minutes, I have only my first impressions, and those impressions caused me to frown a little bit.

If you have ever played a Thief game before, you'll know that the dark spots are important. There have to be places in the world for you to lurk while you plan your movements. This Thief, at least on the map I played, has 'dark spots' but not actual dark spots.

You see, there's a little orb in the bottom left of the screen that tells you if you're visible to your enemies. If the orb is black they can't see you, if it's white they can, and if it's hazy then they can see you but by mechanical necessity they won't be able to tell if you're an actual human sneaking around instead of, like, a human-sized cat? 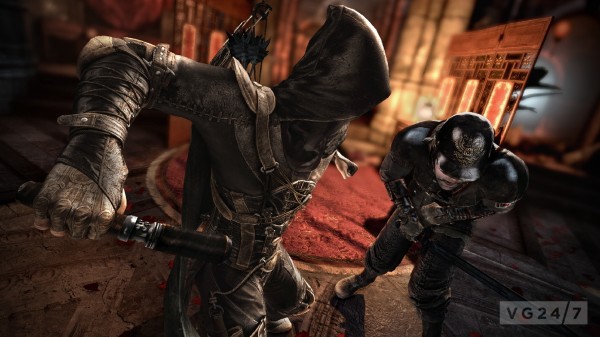 The point is that I crouched and walked right in front of a guard in a well lit are – but with a hazy orb – and the guy was like, “Is that a person? What's going on here?” while a a meter that looks like an eyeball filled up above his head. When the eyeball fills, it finally dawns on him that you are not a loose sentient bit of shrubbery and should be killed.

What did I do then? I ran away, of course, and hid in a corner that the orb told me was totally dark. Except it wasn't because I could see the ground I was standing on and the wall behind me very clearly. Because, I repeat, I was not in a corner that any sane person would hide in thinking his pursuers would not be able to see him there. Alas, the guard I riled up followed me to that corner, stared right at me from a couple meters away, and shouted that he knows I'm around here somewhere and that he will find and gut me.

I get it. Thief is all about the mechanics, and as producer Stephane Roy would tell me later you can't make a totally realistic stealth game because it would just irritate everyone. And it's not like this kind of issue is new to the Thief franchise. But this is an eight-generation sequel to a fifth-and-sixth-generation franchise. My expectations are higher.

As I mentioned above, though, I brought this topic up with a producer from Eidos Montreal, and Roy told me that for the dev team, “immersion is really, really, really important,” and that what they are doing with the lighting in Thief, what I describe above, is all about immersion in working with next-gen systems. 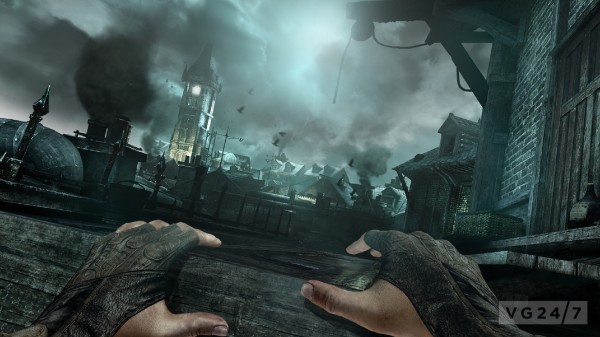 “In real life, it is not dark or light,” he said. “You are in this garden, and you watch, and it's like, 'dark and light?' I kill the immersion.”

What he's saying there is that with the wild lighting tech they have to work with now, it can't just be black or white. The team is trying to take advantage of dynamic lighting tech in order to create a more visually nuanced experience than past games. But it's still a game, and it's a very game-y game.

And he also said something else I mentioned above, which is that after playing with a stealth scenario in the game for a few minutes that you'll figure out what's going on with the lighting and play accordingly, which is true. I did not actually have any trouble getting the hang of playing Thief. He also pointed out that you can turn off HUD elements like the eyeball meter and the visibility orb to make it feel less game-y.

On the other hand, it may be possible to not even treat Thief as a stealth experience, if you get annoyed about being able to hide in not-too-dark shadows. I know I, just for the hell of it near the end of my session, tried a frontal assault instead of stalking around, and I found that I was decently proficient at this on the standard difficulty. But Roy has a message for folks who might want to try that:

“If you want to go in the middle of the light and say, 'Come on!' this game is not for you.”

But if you do decide it's for you, be sure to turn the gamma way down before you play.