If you’re going to counter everything The Last of Us 2 has to throw at you, then customising your gear at workbenches throughout the game is essential.

Scrap that you find littered around the world can be repurposed to smooth out the rough edges in your equipment at workbenches at various points throughout The Last of Us 2. Plus, you get not one, but two beautiful trophies for finding them all - here are all of the locations.

Some workbenches are hidden more than others, and unlike a lot the more important things you can find and interact with in The Last of Us 2, these stations can and do appear in dangerous areas. So you’ll need to keep your guard up as well as your eyes peeled.

Your trouble is worth it though, since workbenches let you improve some of The Last of Us 2's best weapons.

In an effort to avoid spoilers if you’re on your first run through the game, we’ve listed the locations of each workbench in chronological order so it makes sense if you follow along as you play.

The Last of Us 2 Workbench Locations

You encounter the first workbench in the game when you're out on patrol with Dina. It's at the end of the hall when turn on the generator at the Library. 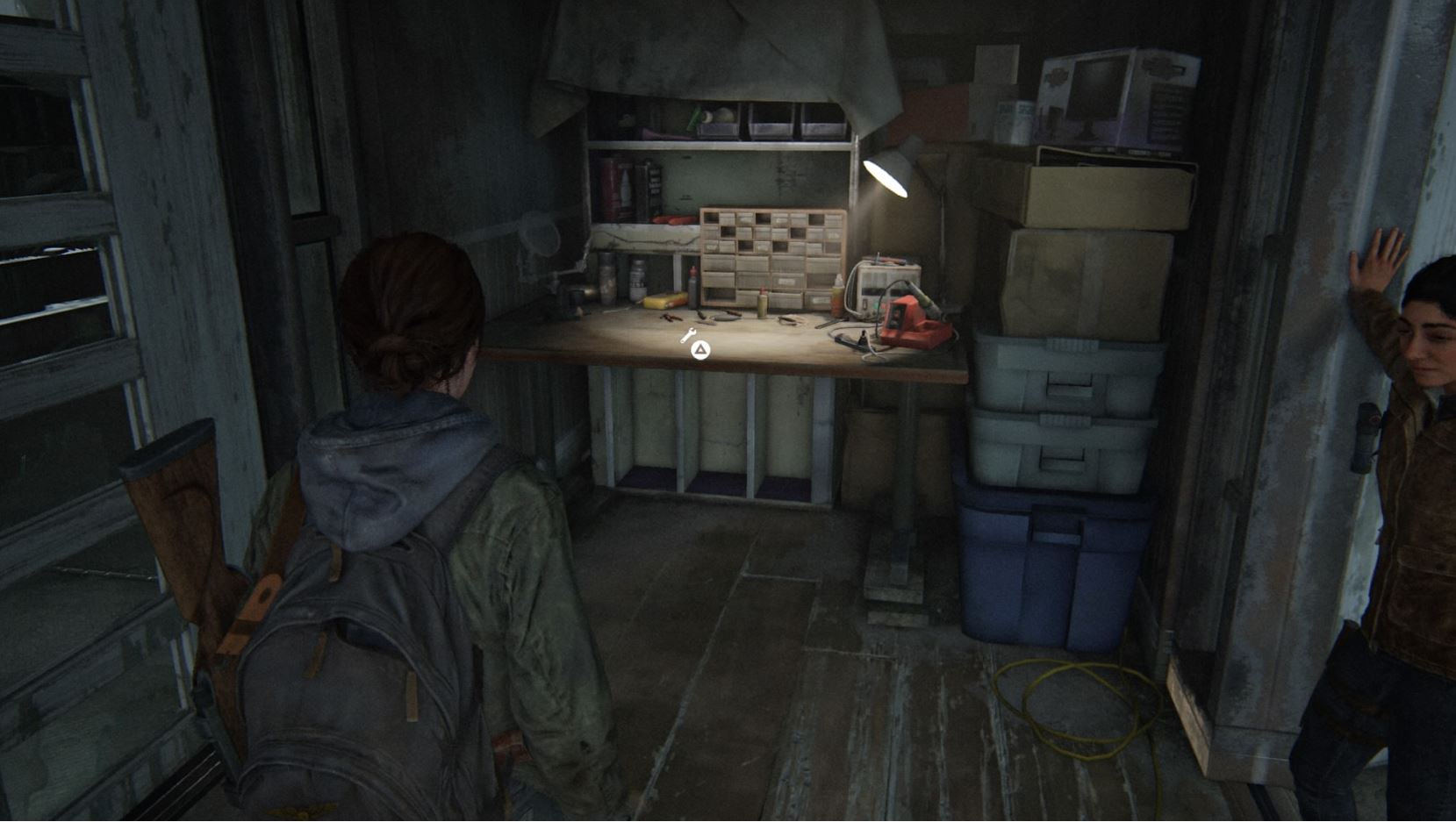 Later in Seattle Day 1, after you've made your way to the downtown area - which we have a full page on here - there are supplies and a workbench at the FEDRA camp on the intersection of 5th ave and Madison street. 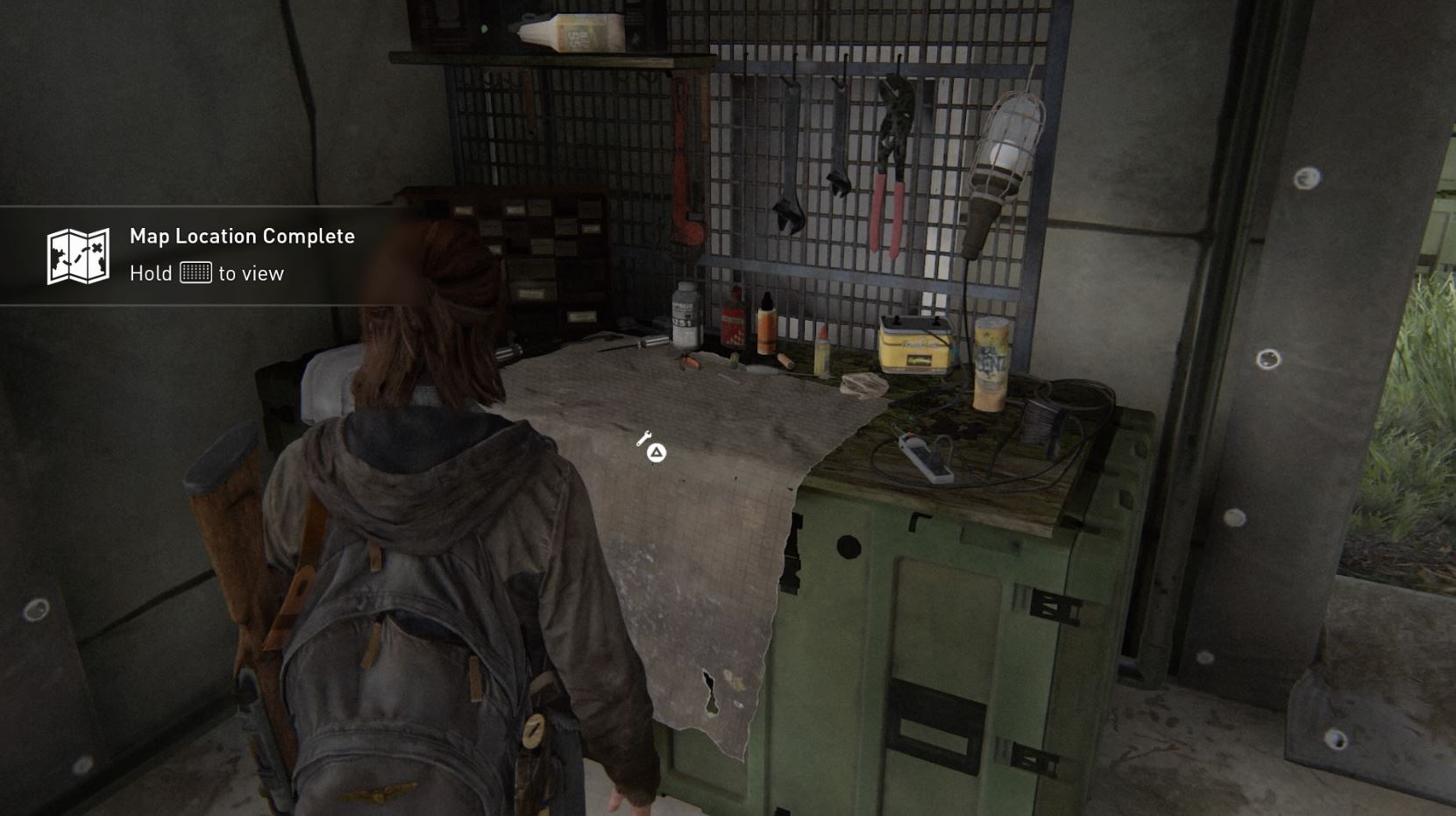 Then after the Seattle hub when you're making your way through the shopping streets filled with WLF troops, there’s a Workbench in the gas station and auto repair shop near Nancy’s seasonal items Halloween shop. It's on the left as you approach Nancy's. 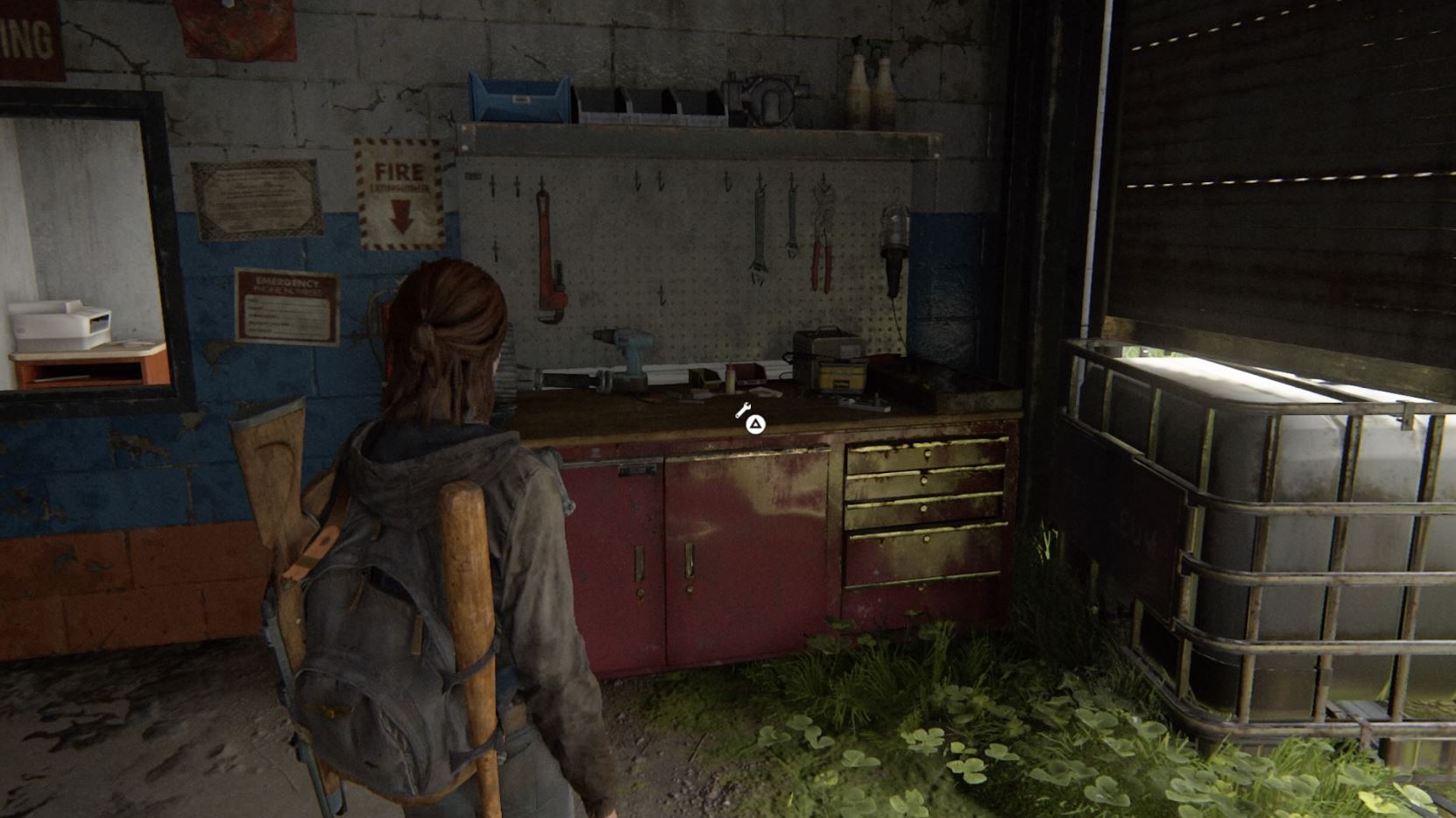 In the second landmine area, as you enter, there’s a martial arts studio on your right - there’s a Workbench behind the changing room inside. 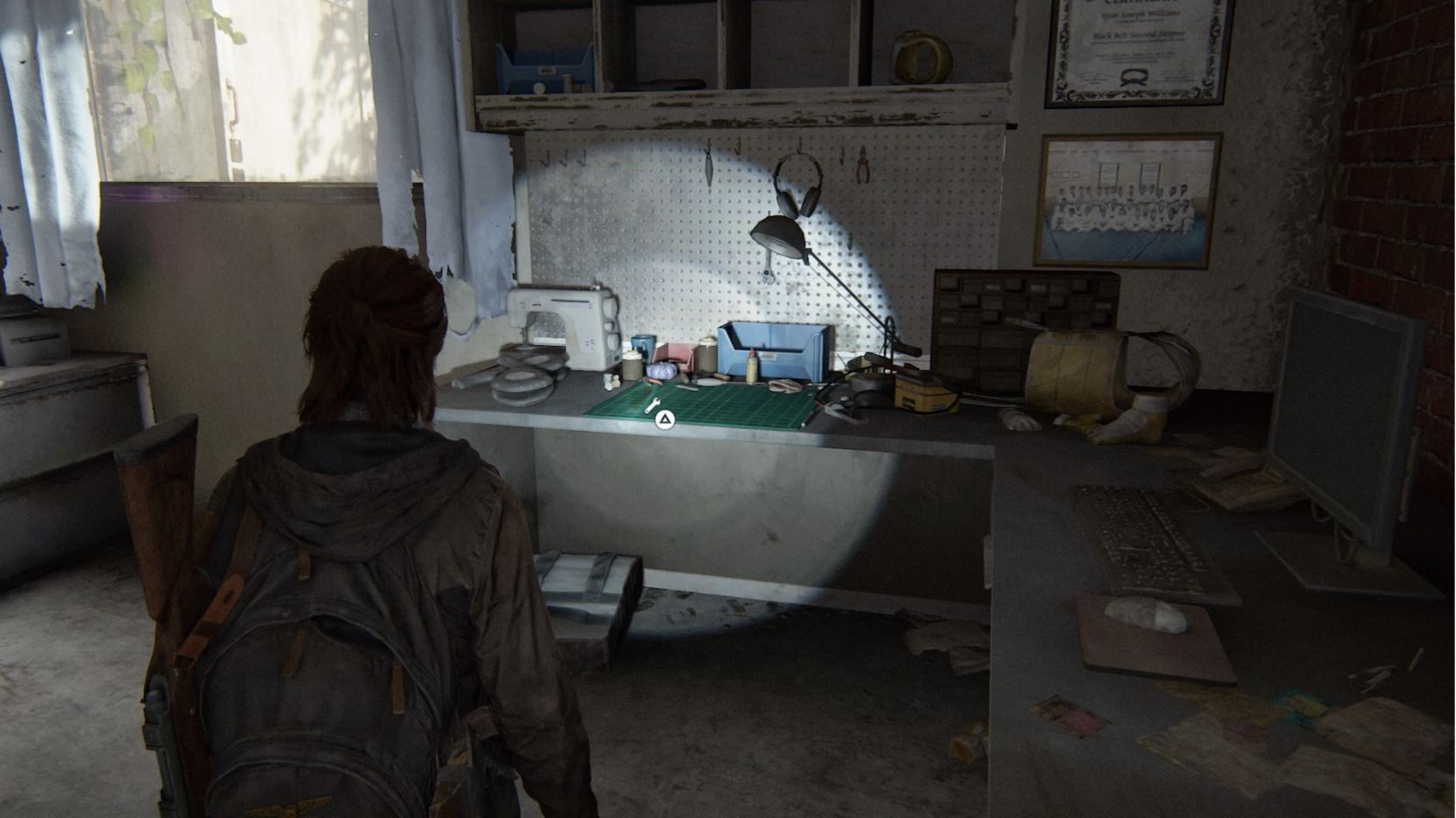 The next workbench comes a bit later on in Day 1, in the subway after the TV station. When you reach the room lit with a red light, climb the ladder on the right-hand side of the room and open the door in front of you to find a workbench. 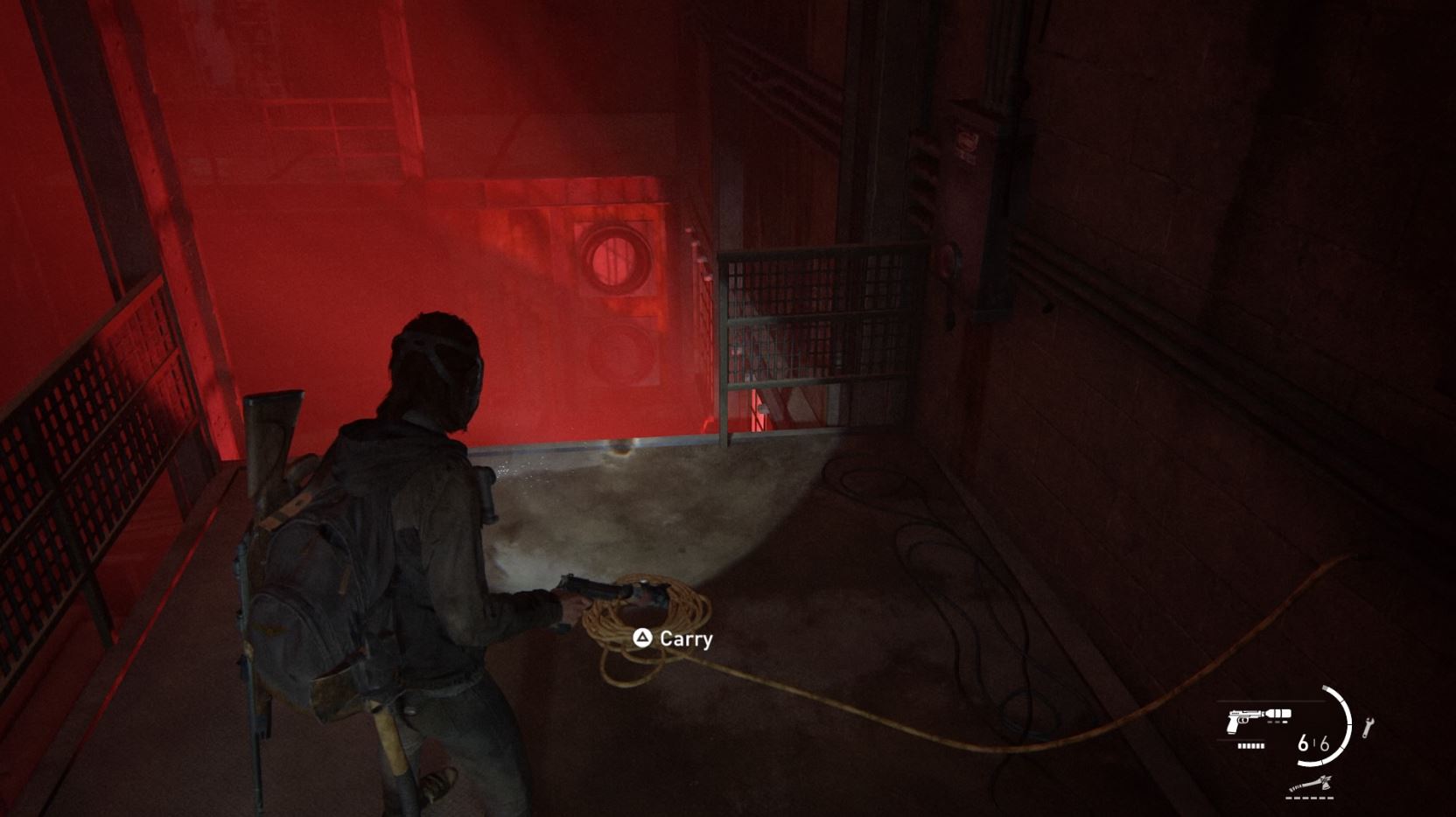 Next, when you regain control at the start of Seattle Day 2, you make your way through more shopping streets and through a "Natural Remedies" store. On the other side of this store, there's a clothes shop across the street called Rosemont. Inside, you'll find a hole which leads to the basement behind the register. There’s a note in the basement - 6 supplements on the side next to it - and a workbench. 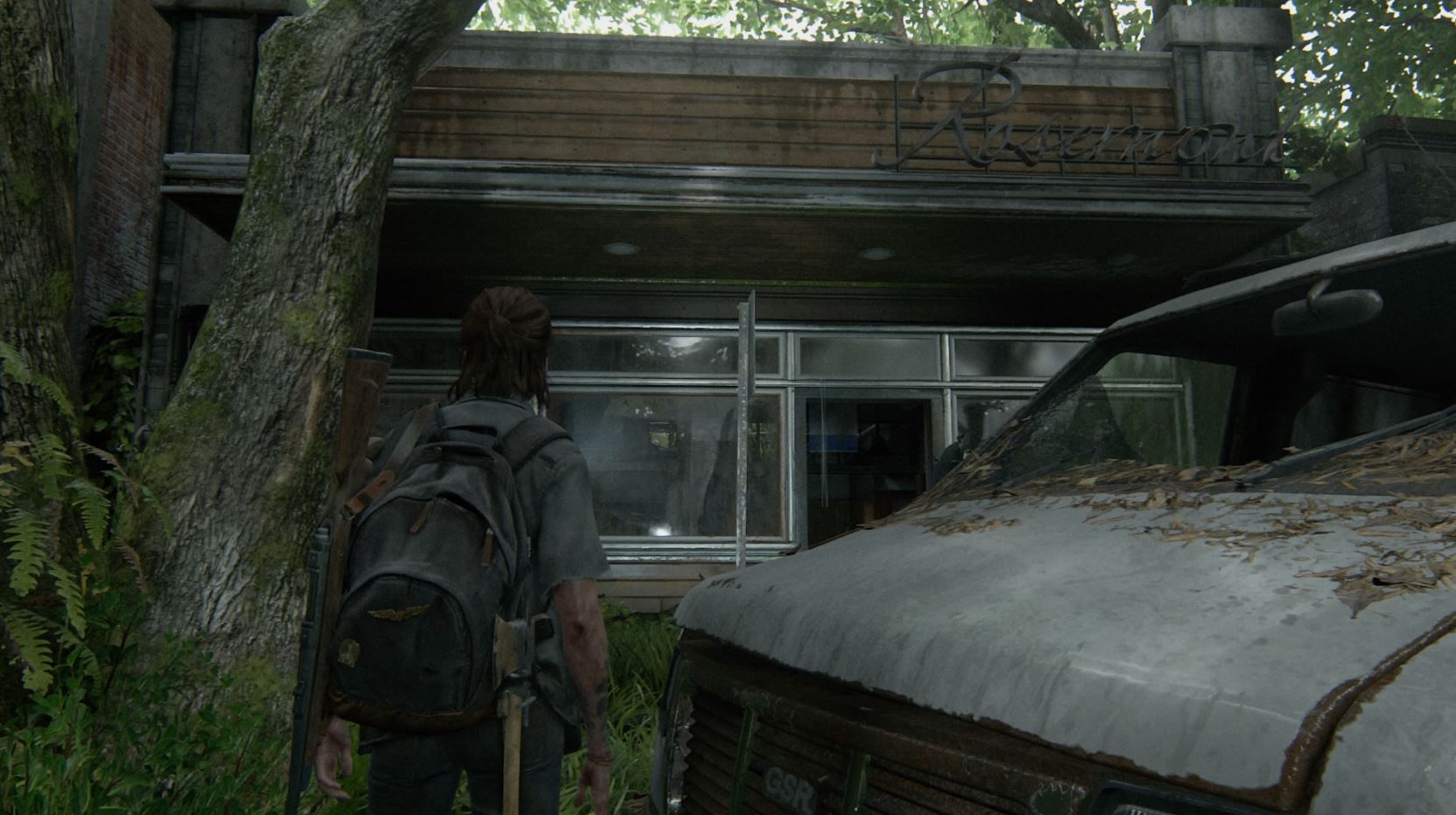 After you fight through the areas where dogs are first introduced as enemies, you’ll eventually find a workbench right in front of you as you advance. It's after you roll a dumpster from one side of a street to the other to give you a boost up and over a garage. 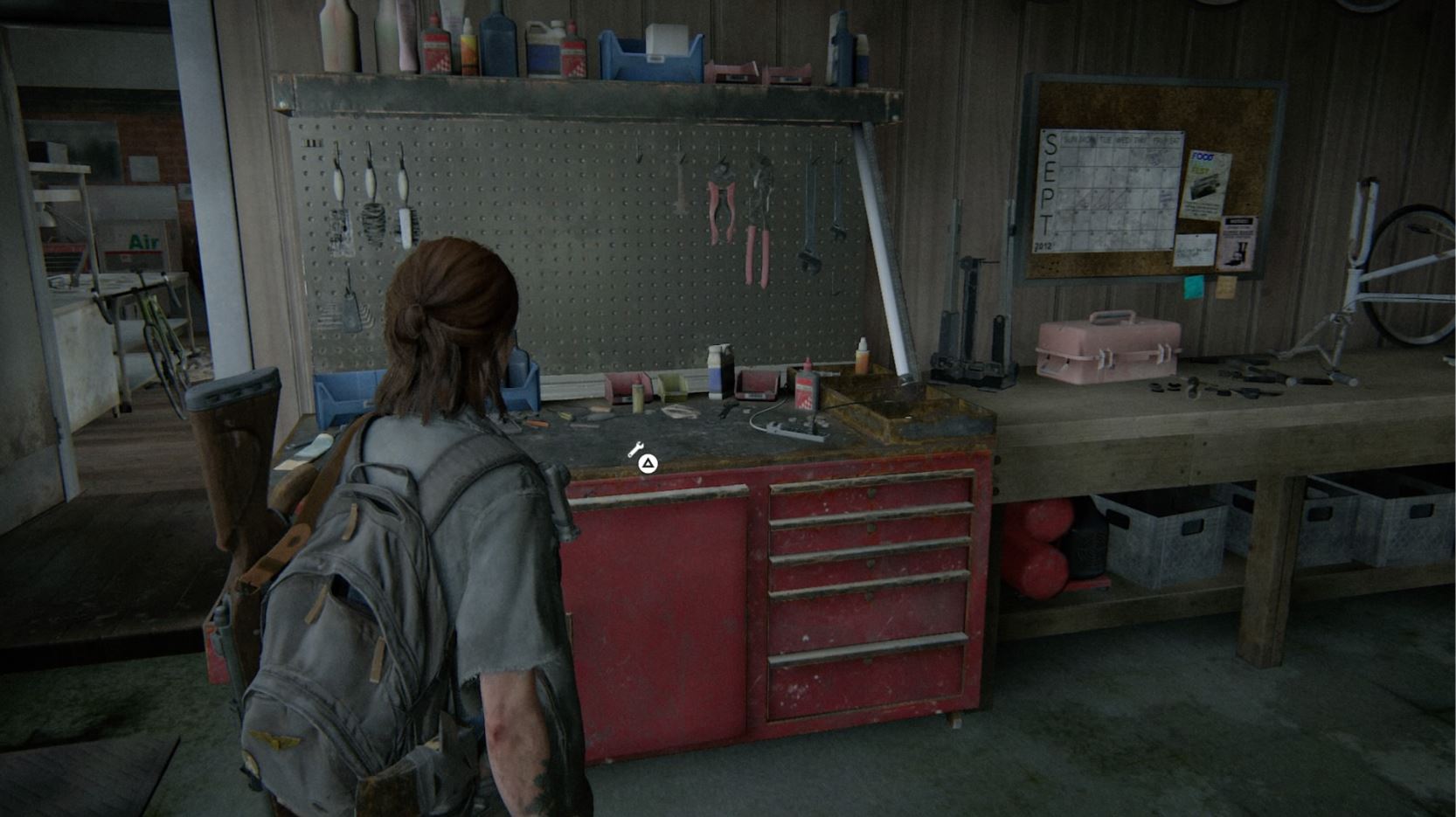 Once Ellie starts her mission to the hospital, she’ll go past a bar - Kingdsgate Brewing - on the left and a conference centre on the right. Further up the road, there’s an apartment building on the left - go up to door then look down stairs to right to see crawl space entry. There's a workbench on the second floor on the right-hand side of the building. 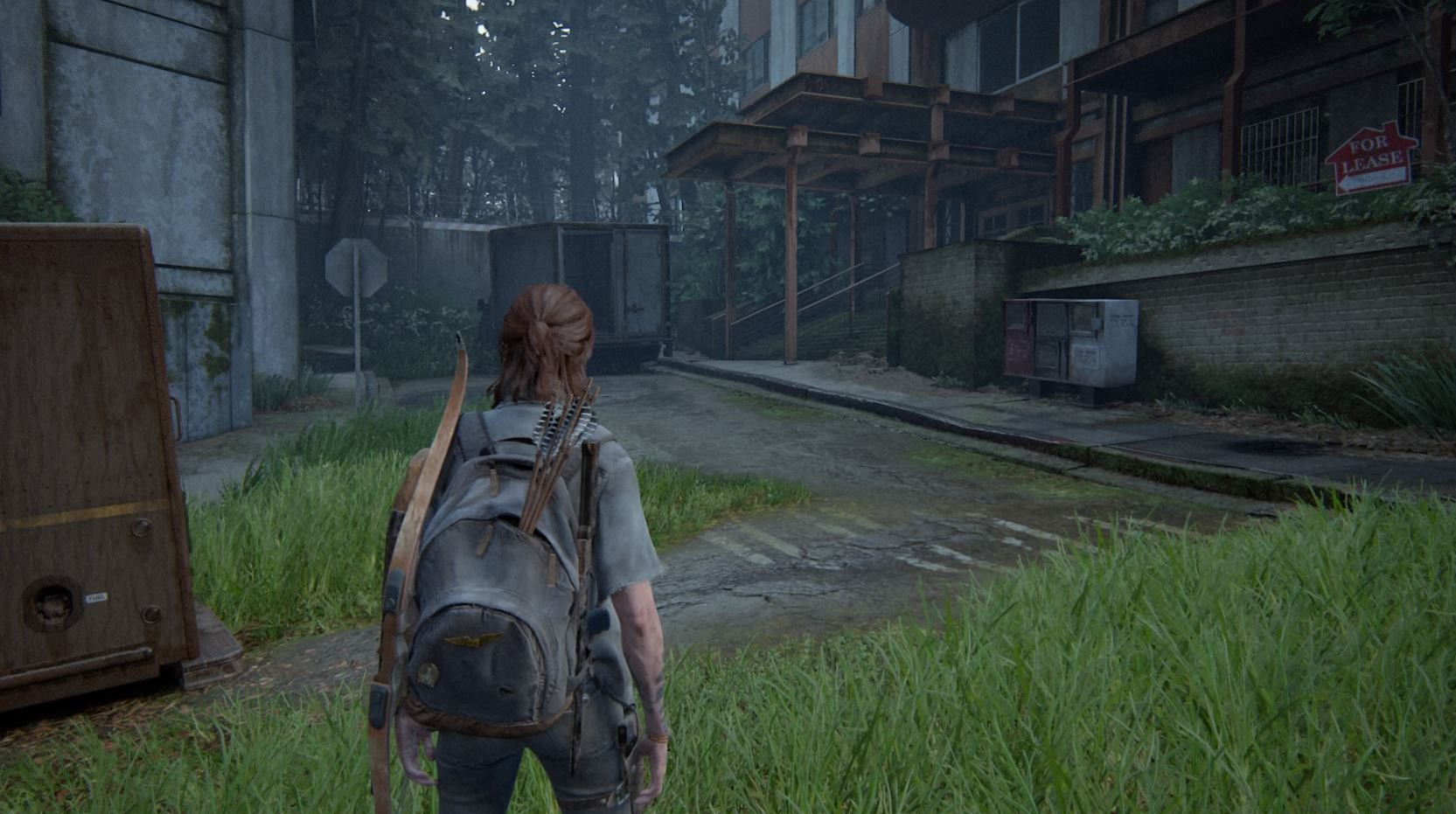 A fair while later, on the other side of Garden Suites when Scars are introduced, you’ll fight a big dude at Merci Cosmetics. Continue forward, then when you’re prompted to press R3 to look at the hospital, instead of following the flooded path forward break off left to Weston’s Pharmacy. Inside on the left is a hole in the wall you can crawl through into the back office, inside is a workbench. 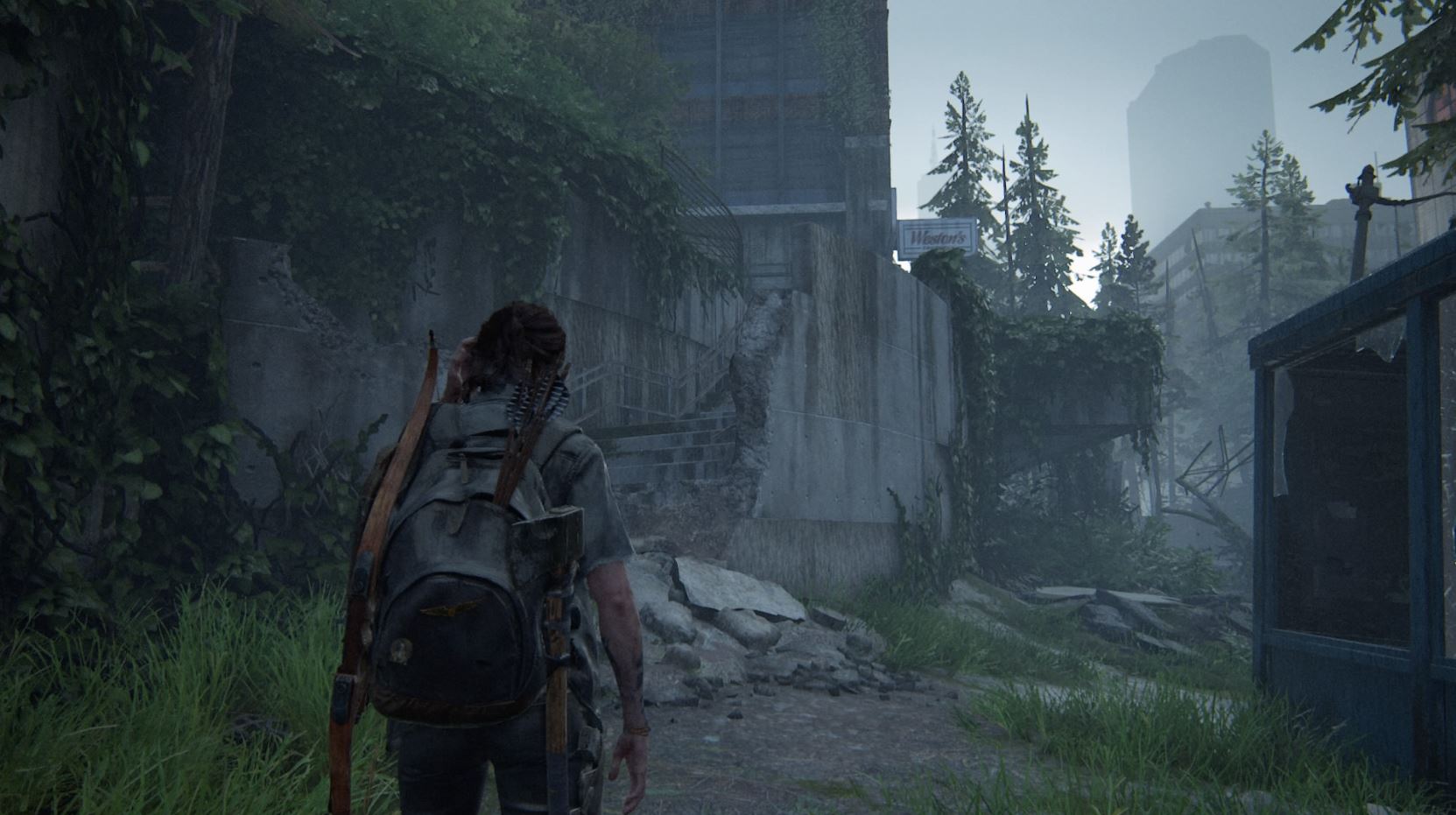 At the start of Seattle Day 3, after you make your way through the rainy shopping streets past Noodle Bowl and Frontier Rental Car, continue along the ruined road. Then smash the window on your right to get into III DI. Go through the shop and through the unlocked door, then further up the hall, crawl under the door blocked by the “trusted shipping” sign to find a superhero card and a workbench. 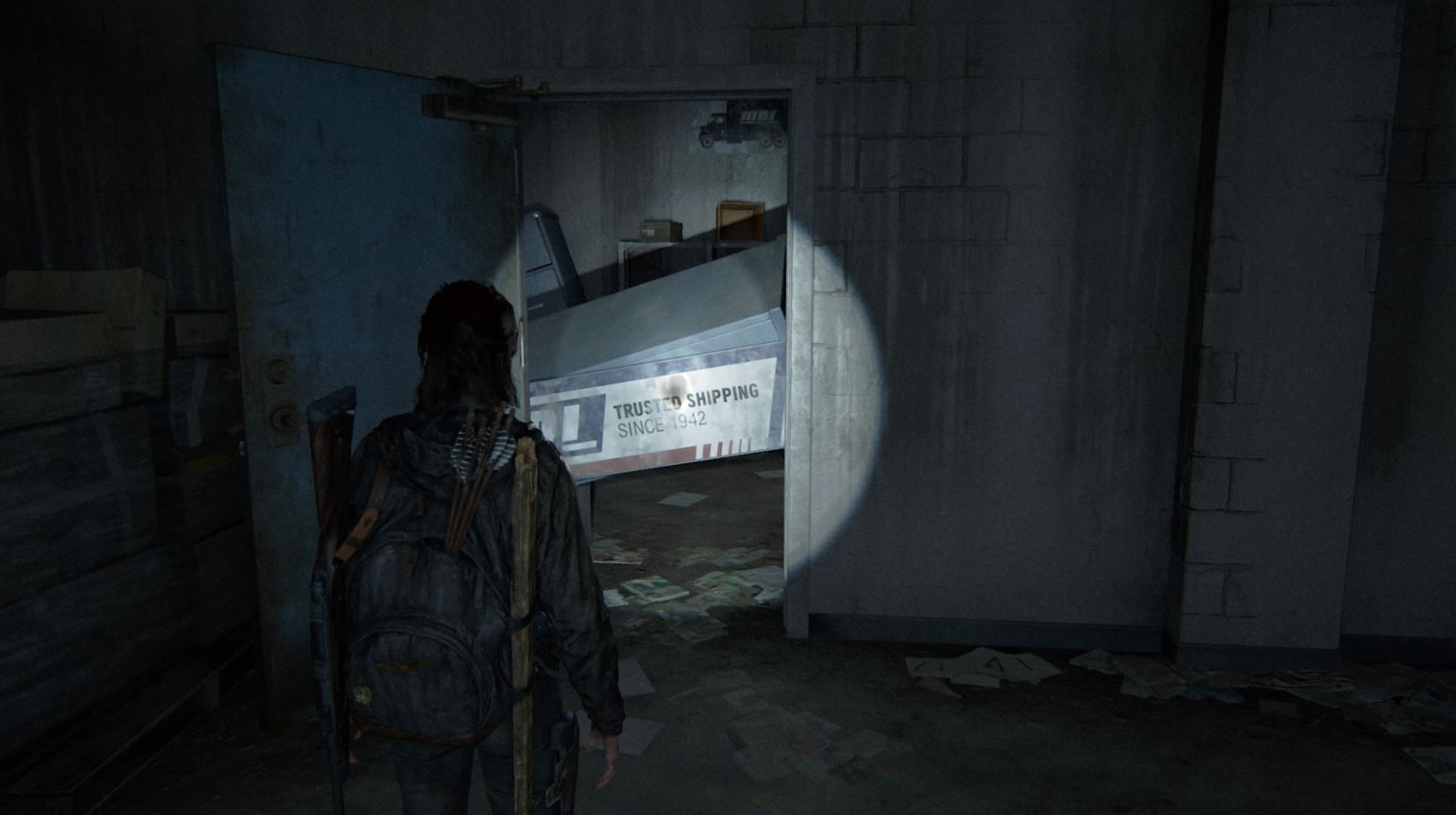 Later on, after you've gone through the library, when your partner says to go up to the bridge to get bearings there’s a workbench on the second floor of the building you go through to get up to the next level to a Norkirk sign. 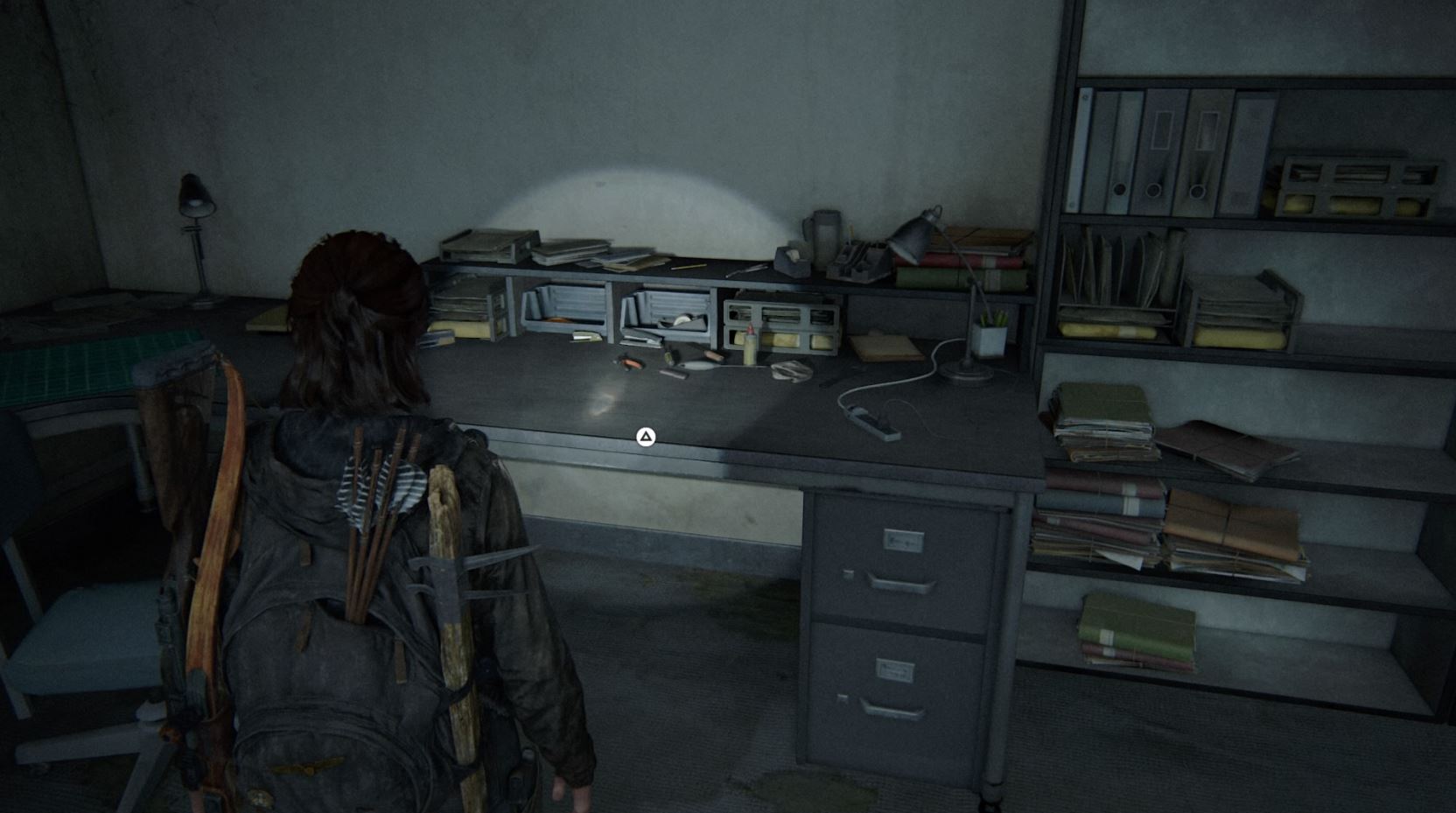 After the 3rd set of rapids, there’s a bank on the left you can pull up to with manufacturing company garage - inside is a workbench, I got the silver trophy "In The Field" here. 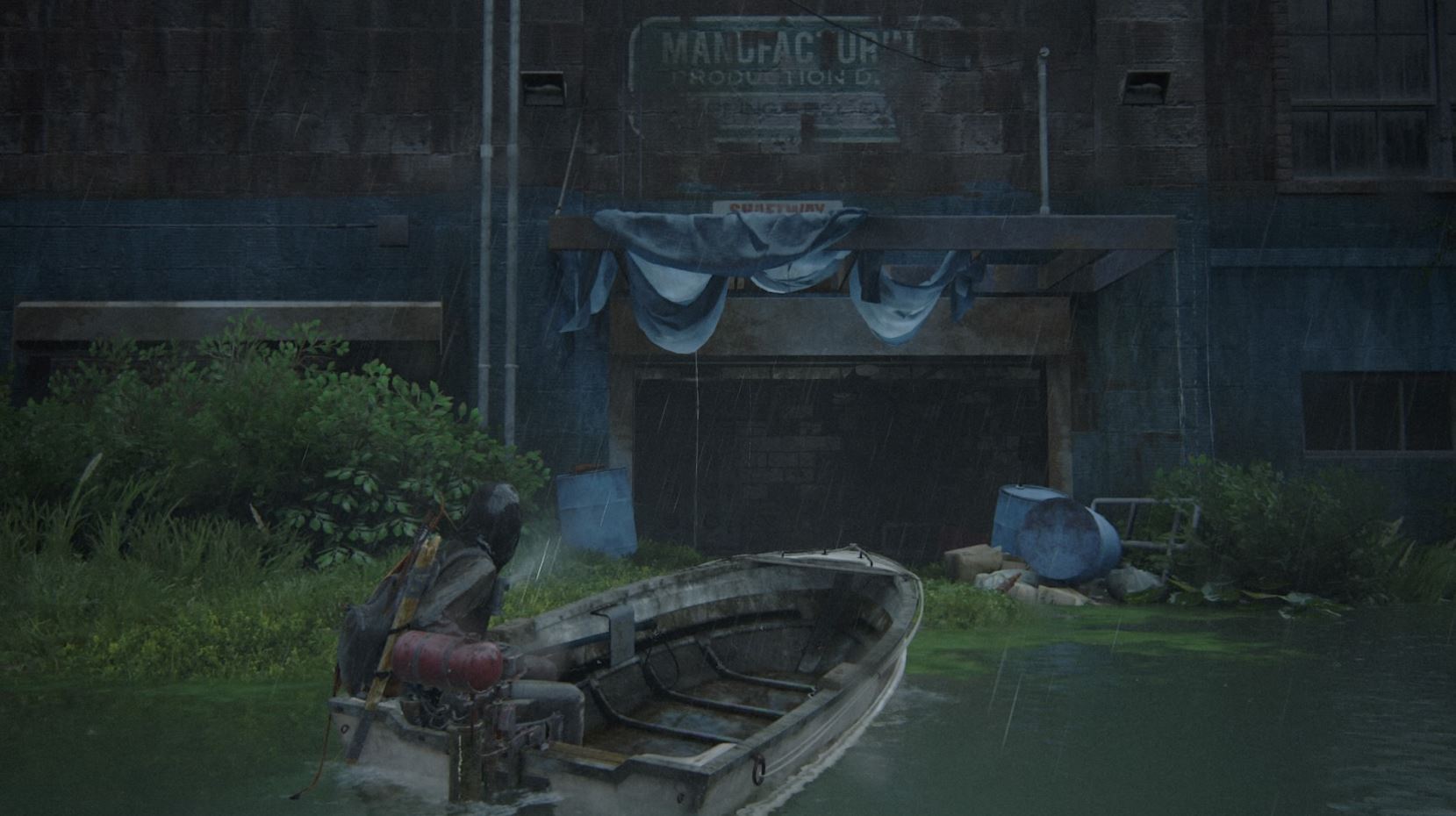 A bit later in the day, in the waterlogged arcade, upstairs there’s a Jak X easter egg and a workbench - there’s also a The Turning arcade cabinet easter egg. 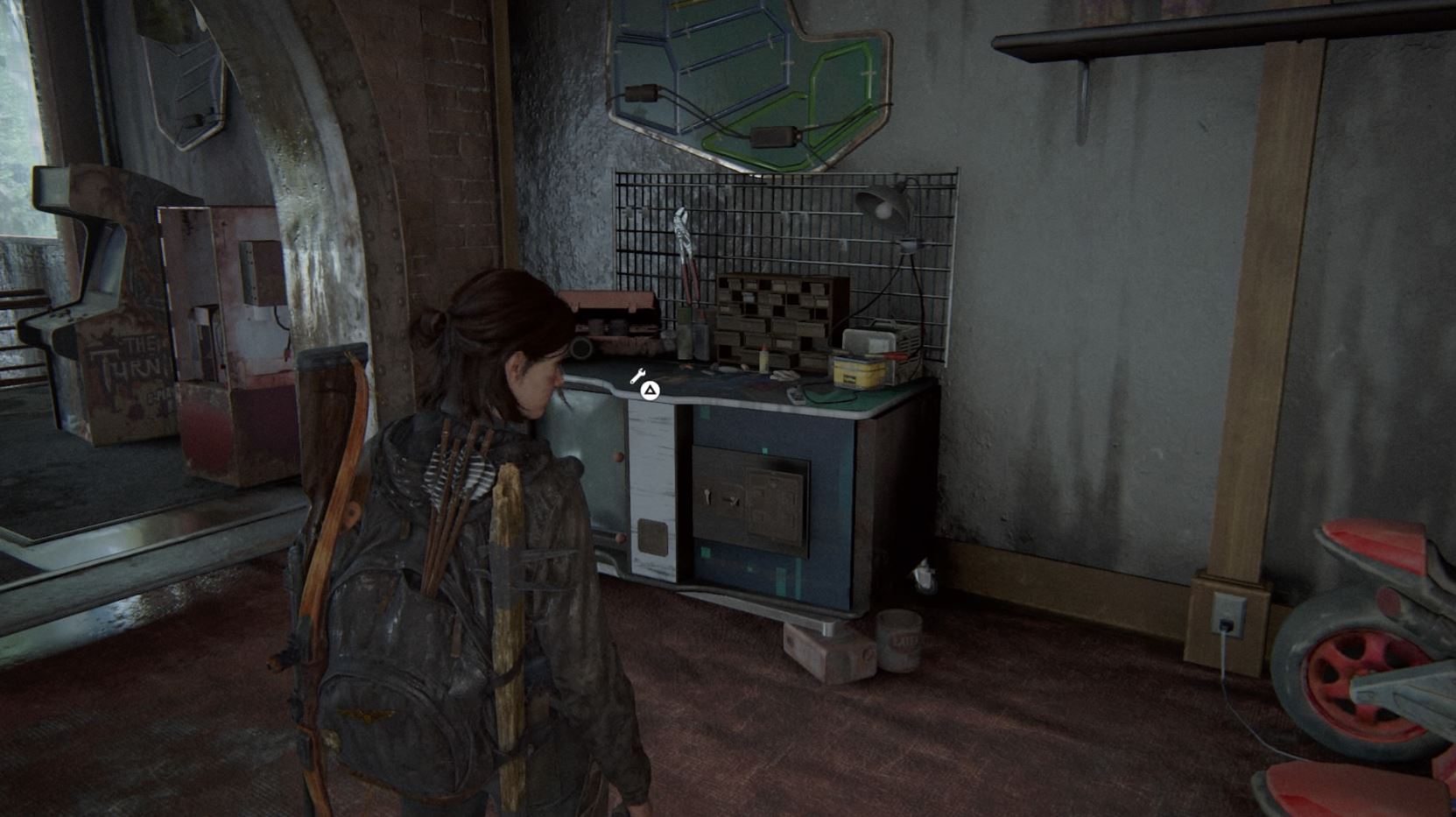 Be warned, past this point in the page contains spine-chilling, bone-shattering spoilers that will rock you to the very core.

Seriously, if you’re not past Seattle Day 3 in the story - go, play, you’ll know when to come back and you’re not going to miss anything here in the meantime. 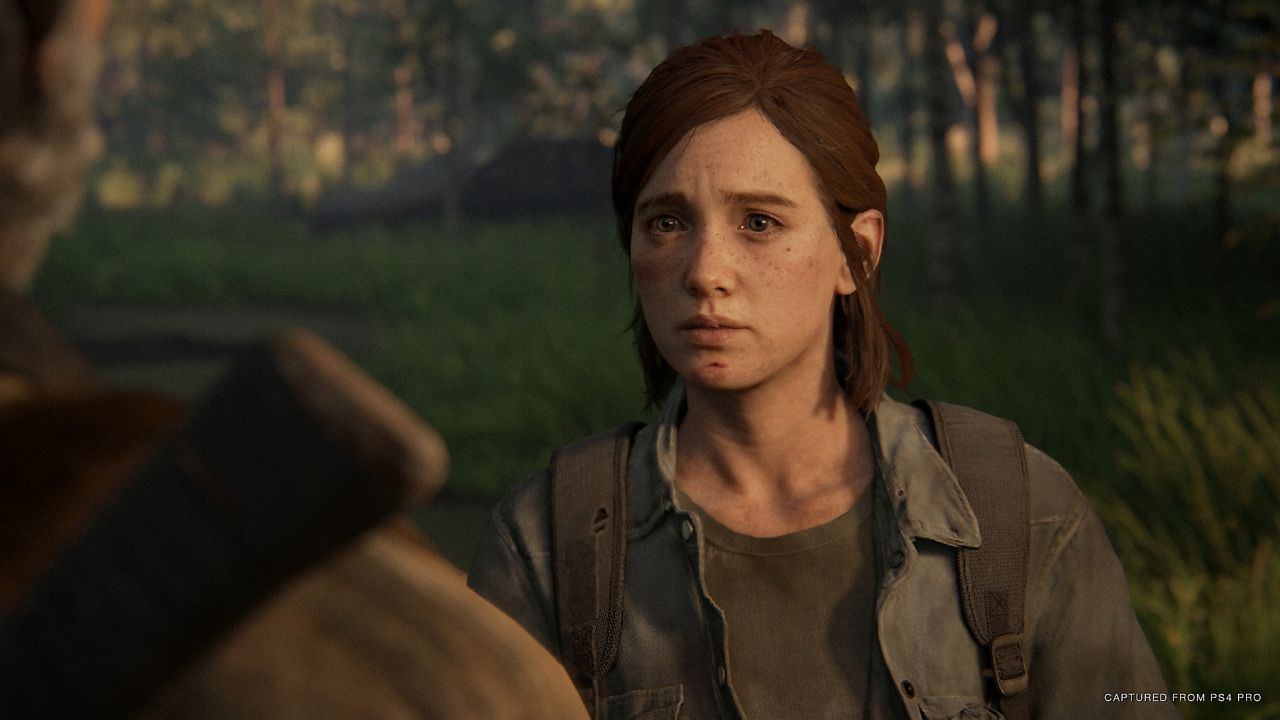 After you've left camp and things have taken turn for the worse, you'll get to a point where you use a cable to get onto the roof of a warehouse then drop down into the building. Inside there’s 23 supplements on the shelves next to where you hold the door open for Mel, then a Workbench in the next area. 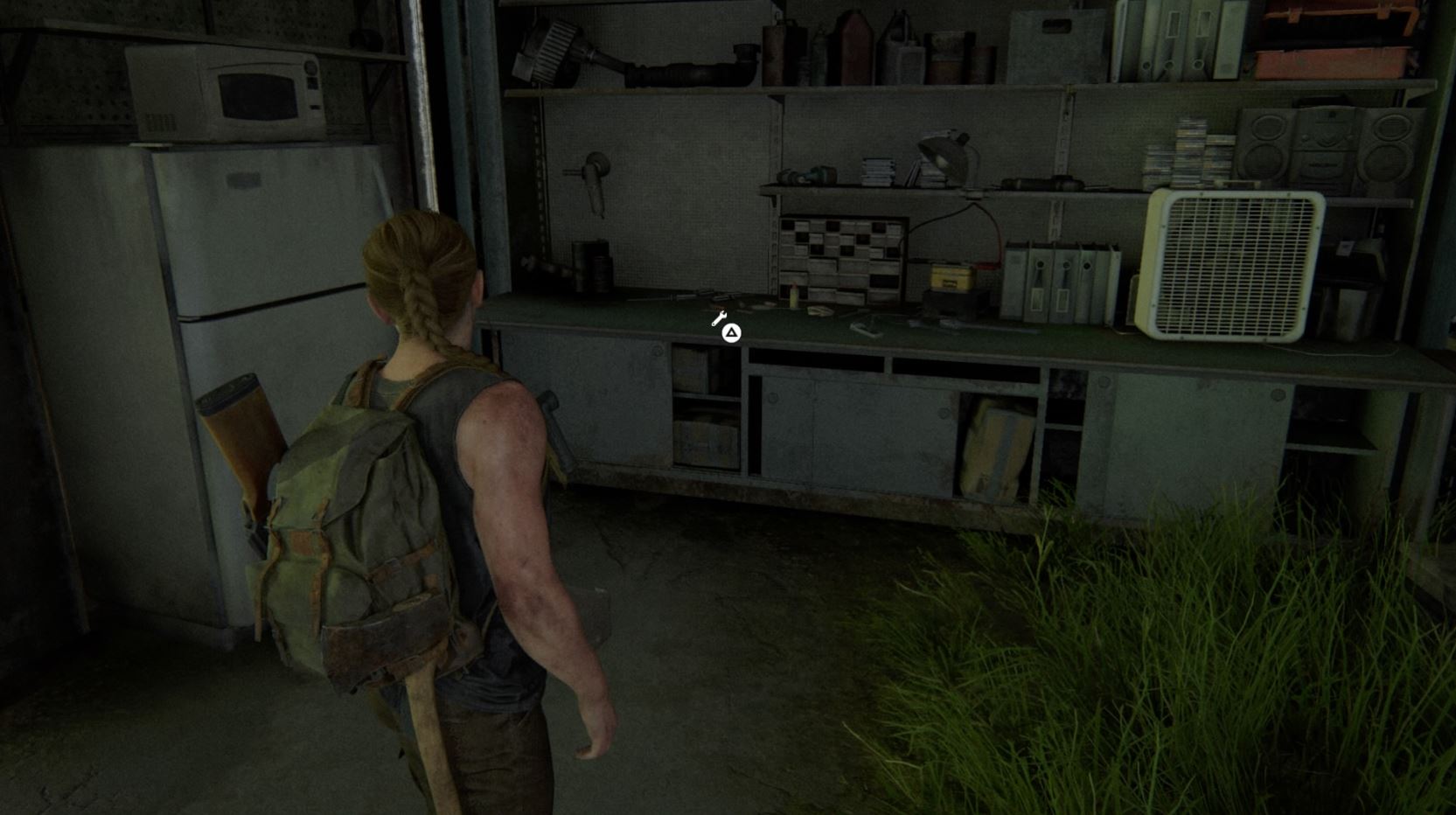 Once you reach the FOB, there's a Workbench on left as you come into camp. 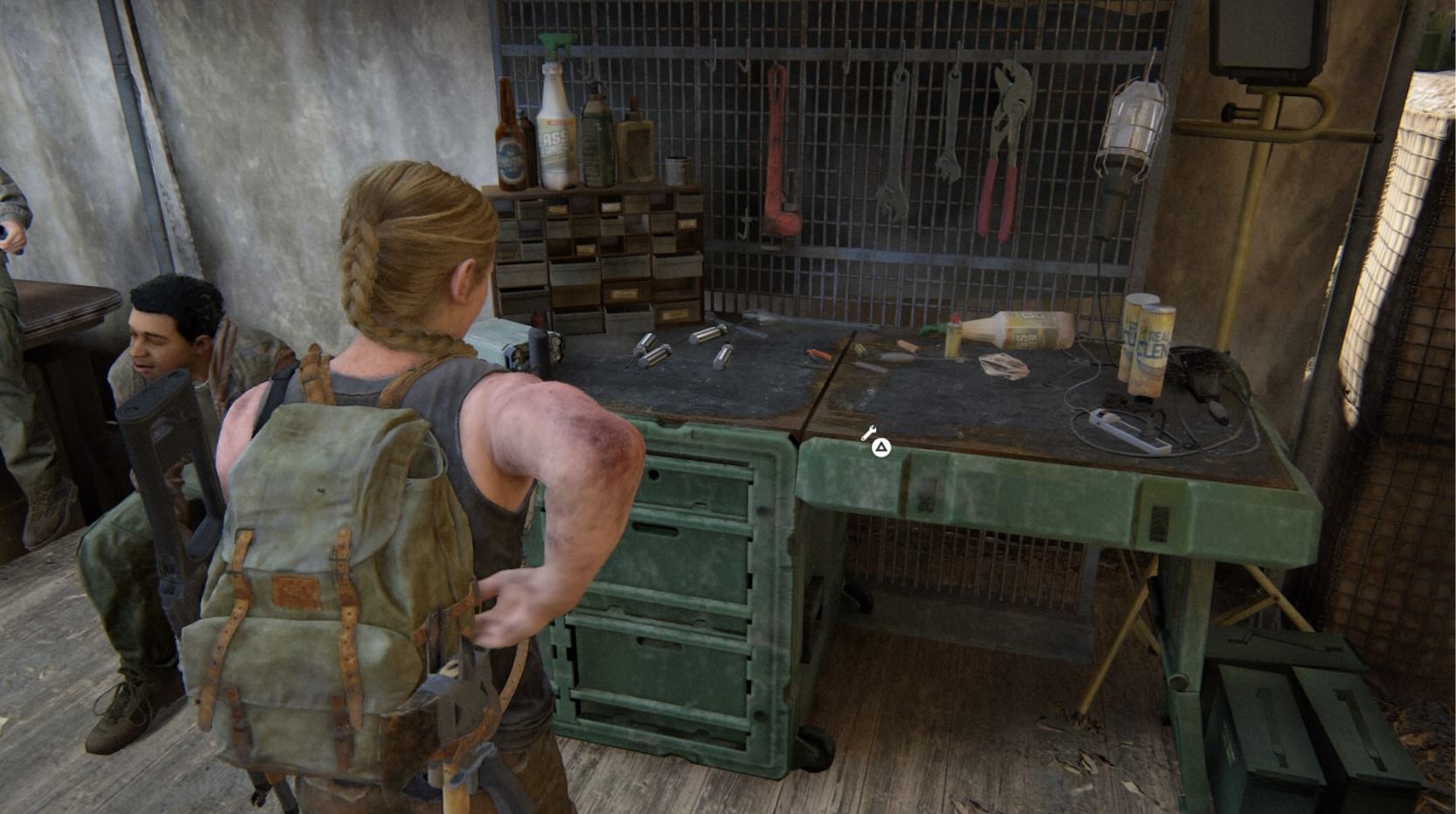 Later, just after Martyr’s Gate when you pass the graffiti of the Prophet on the wall, there’s a wooden workbench at the top of the building after you fight the Scars in the open area. 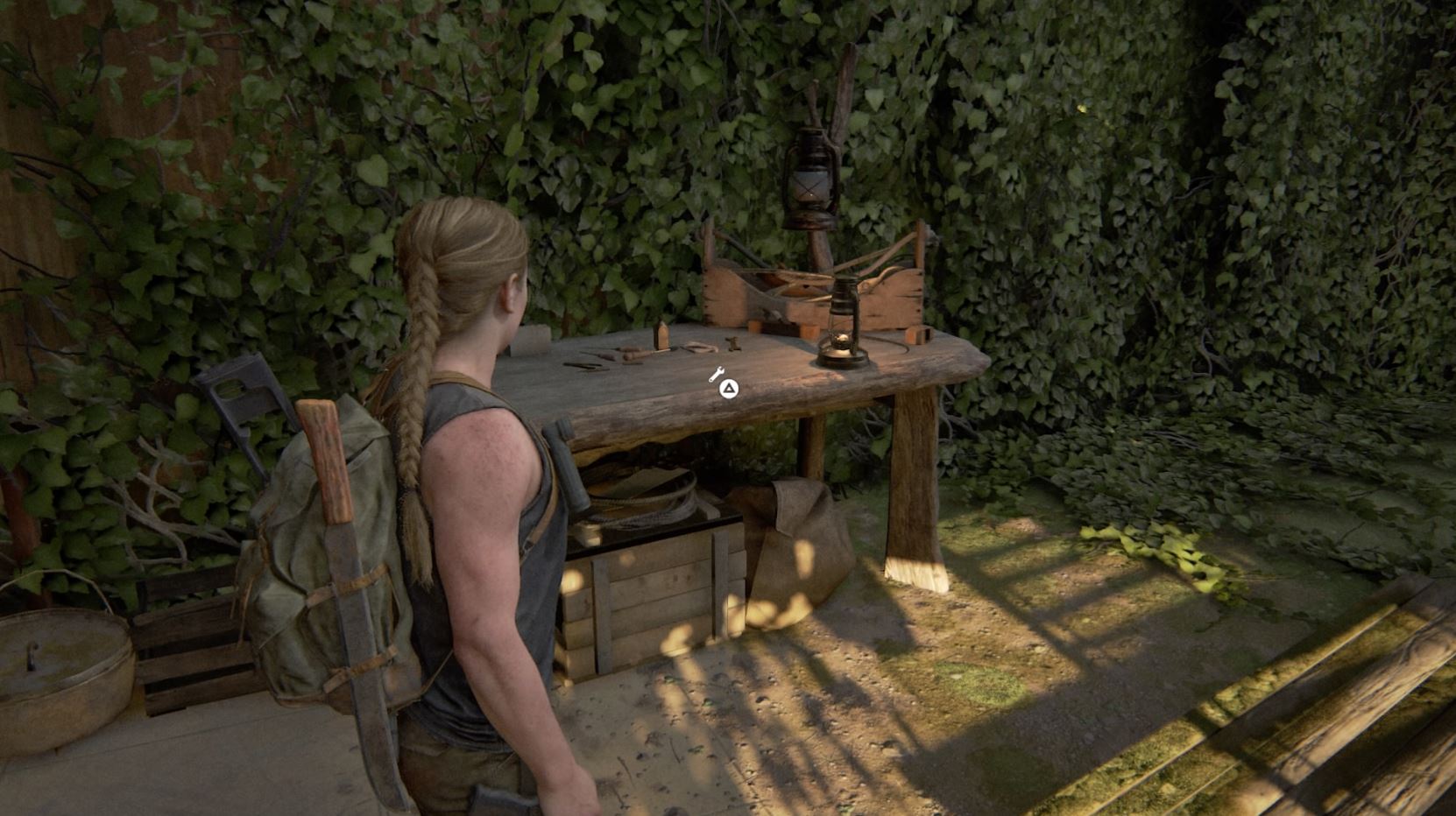 Next, after the grim cutscene from the original E3 reveal trailer, you'll find a workbench on the left after you get run into the auto shop with Lev and Yara. 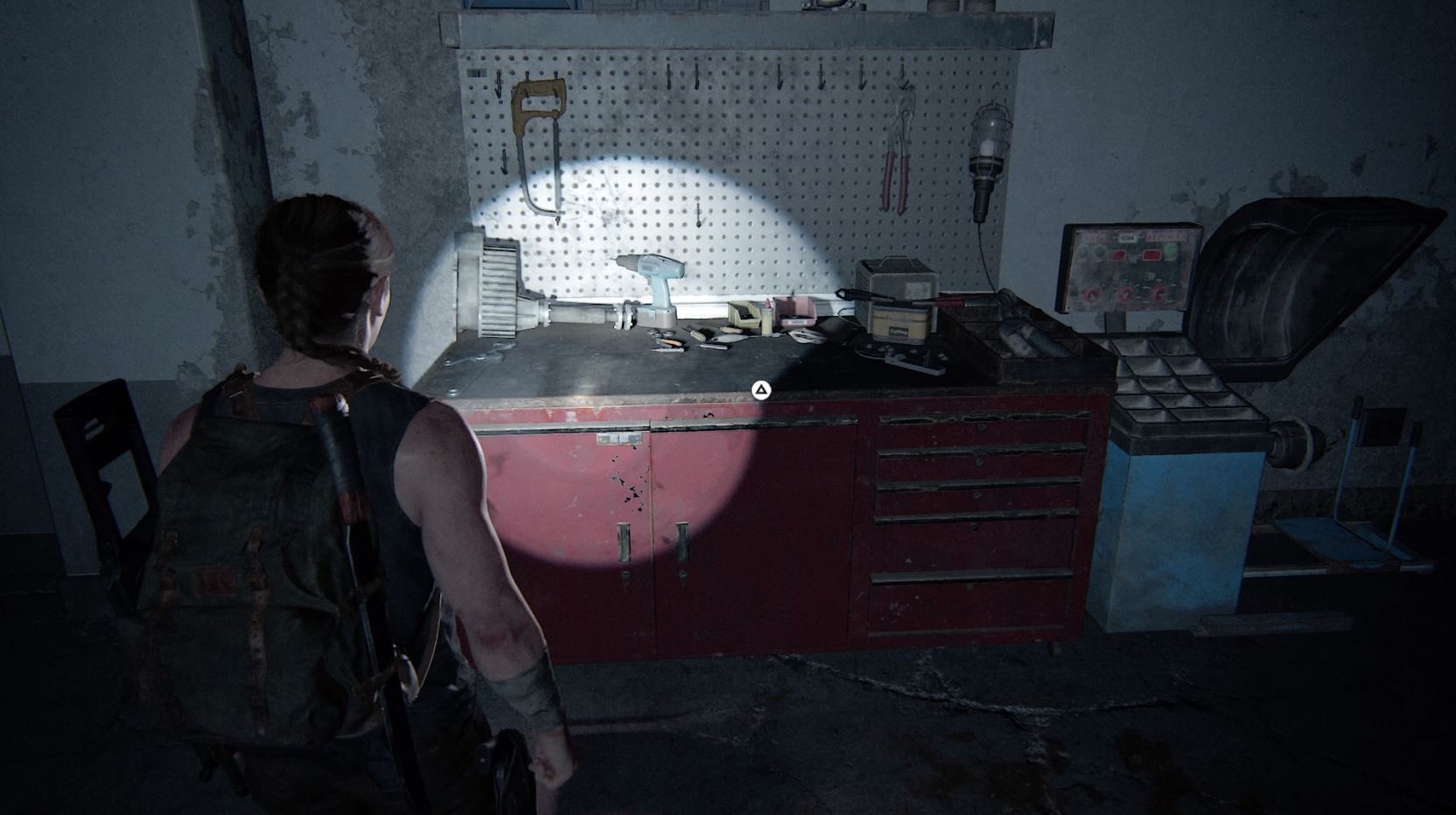 Then after you part ways with the kids and hop the fence, look to the open shipping container on the right and you’ll find 10 supplements. Right after that in the building there’s a workbench. 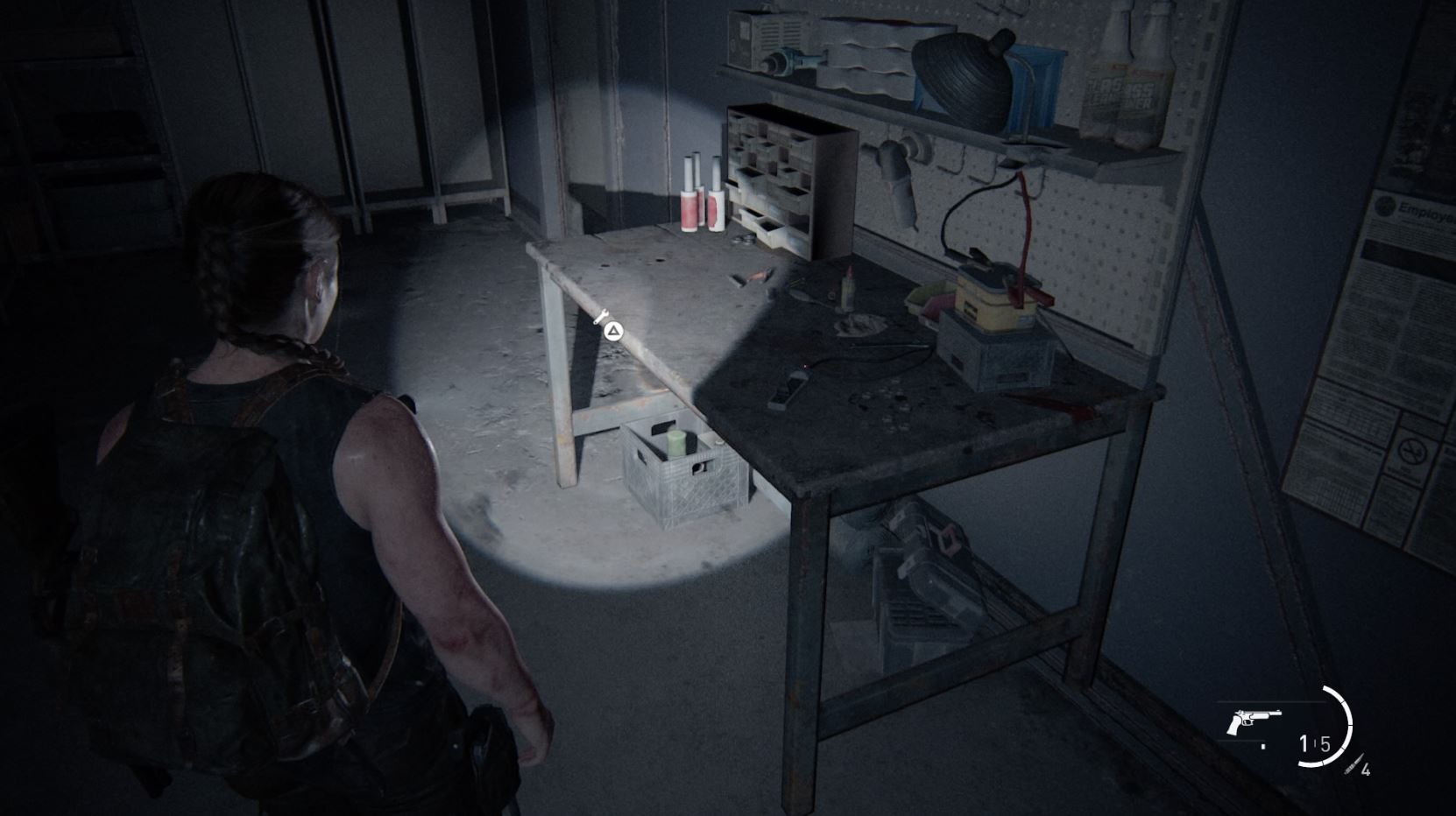 Once you regain control in Day 2, the same Workbench is in the same place as it was the evening before on your way back through the warehouses. I'm not sure if this counts, but it's better to be safe than sorry. 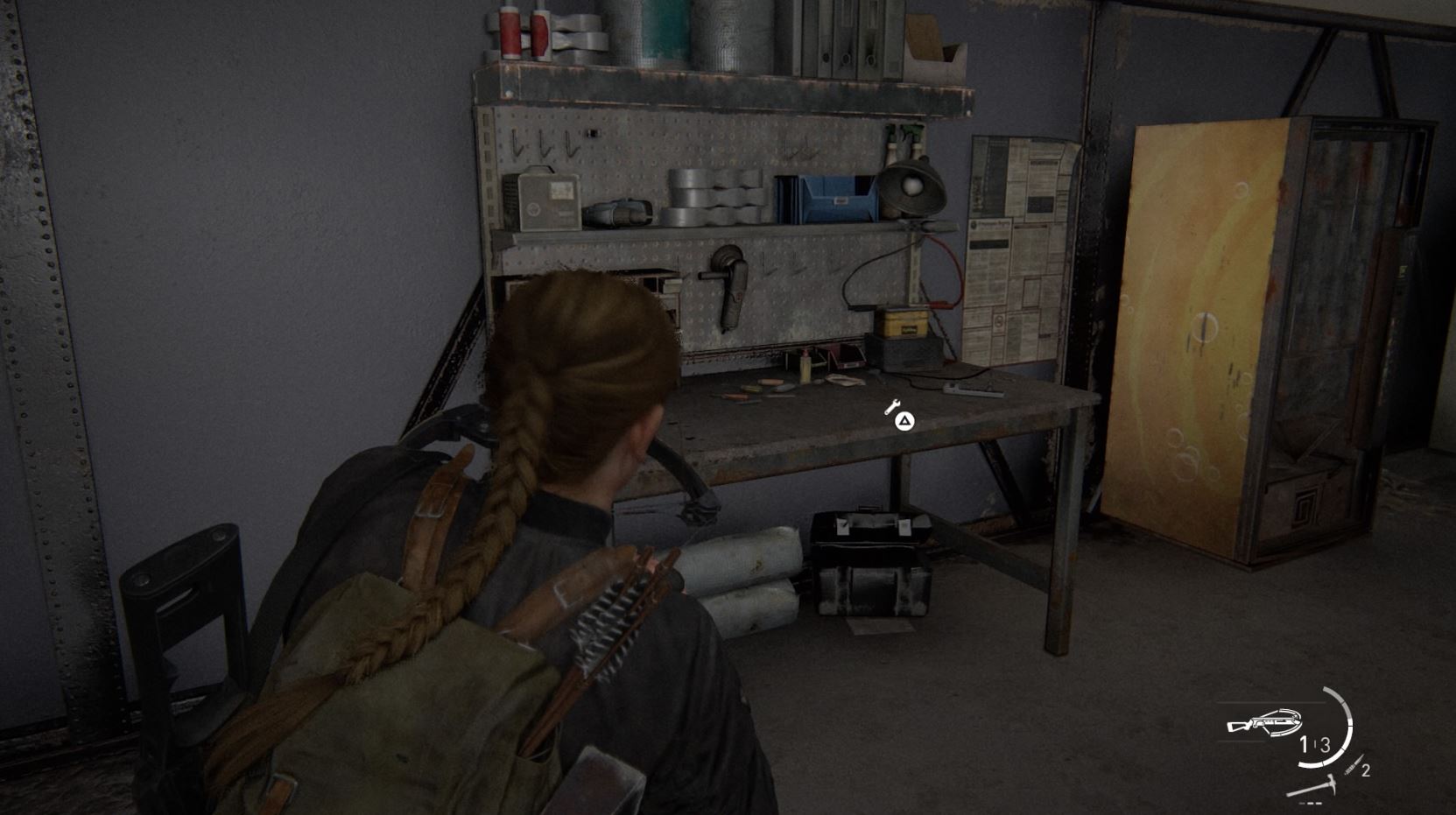 As you progress with Lev, there's a Workbench on the left-hand side of the shop when you go into Interbay when you're jumping between platforms in the rushing river. 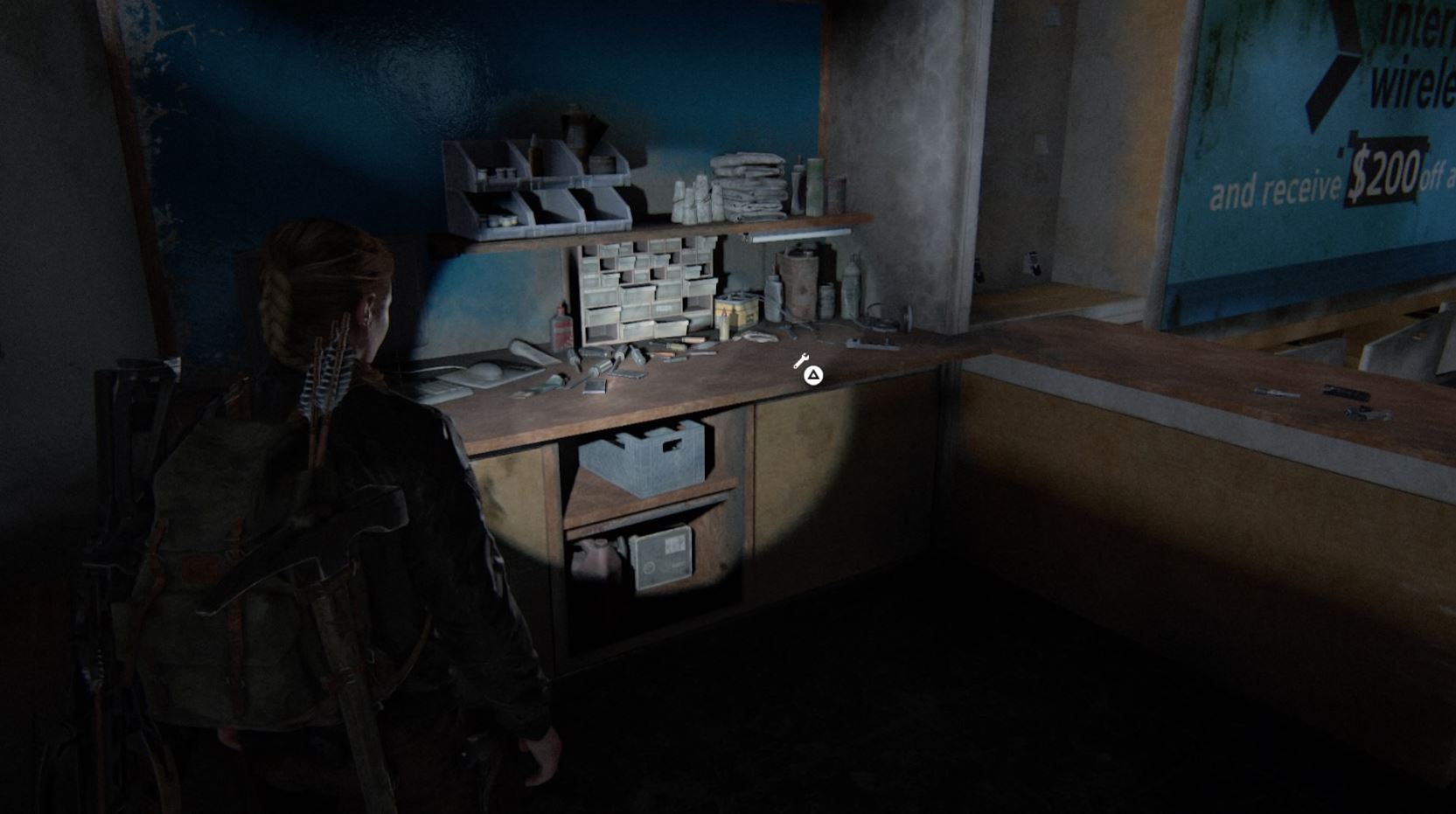 Later on, as you reach Scar territory, there's another Workbench up the second wooden ladder - just after the prophet mural. 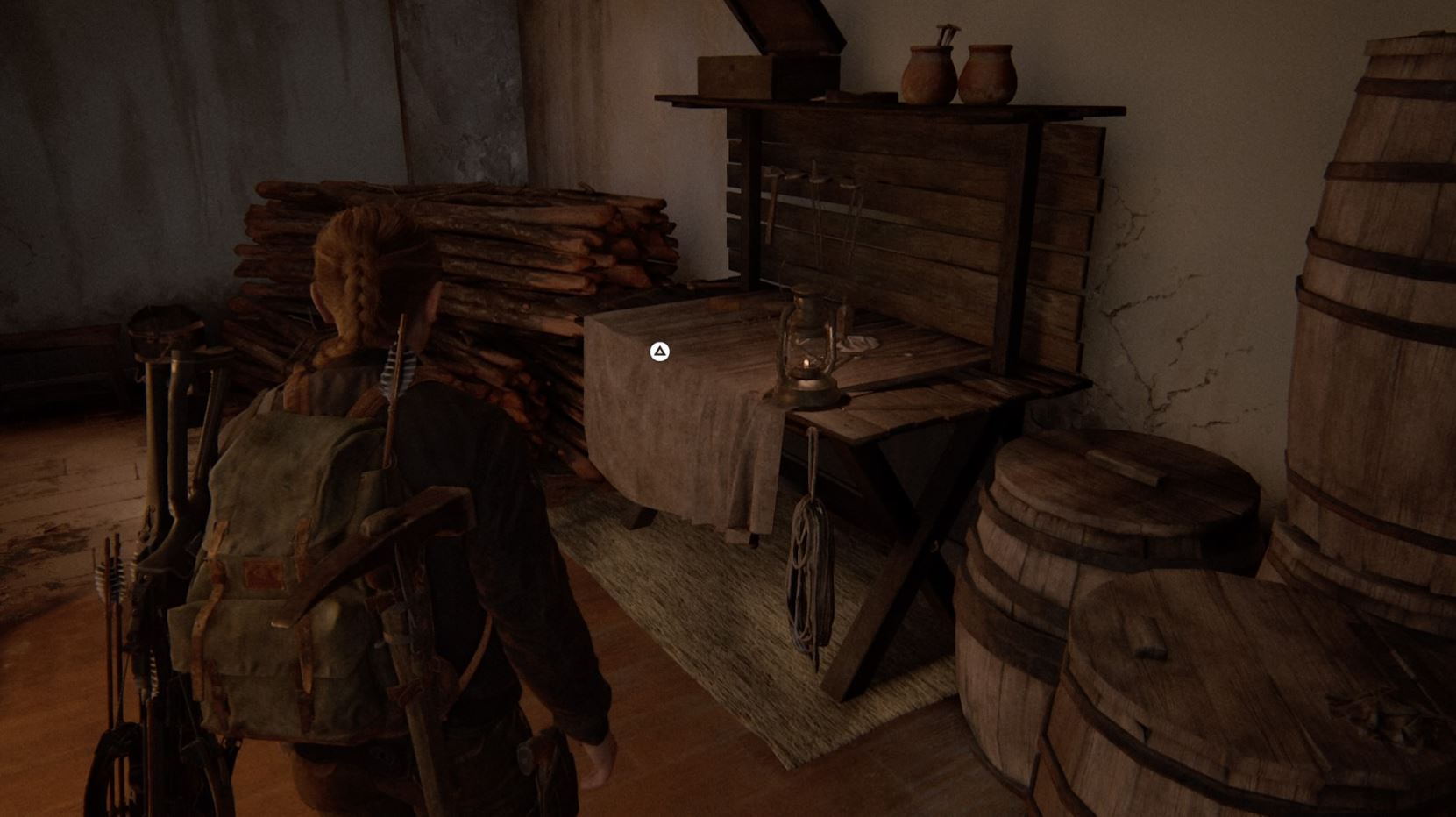 Then finally for Day 2, there's a Workbench next to the generator in the Surgery area of the hospital. 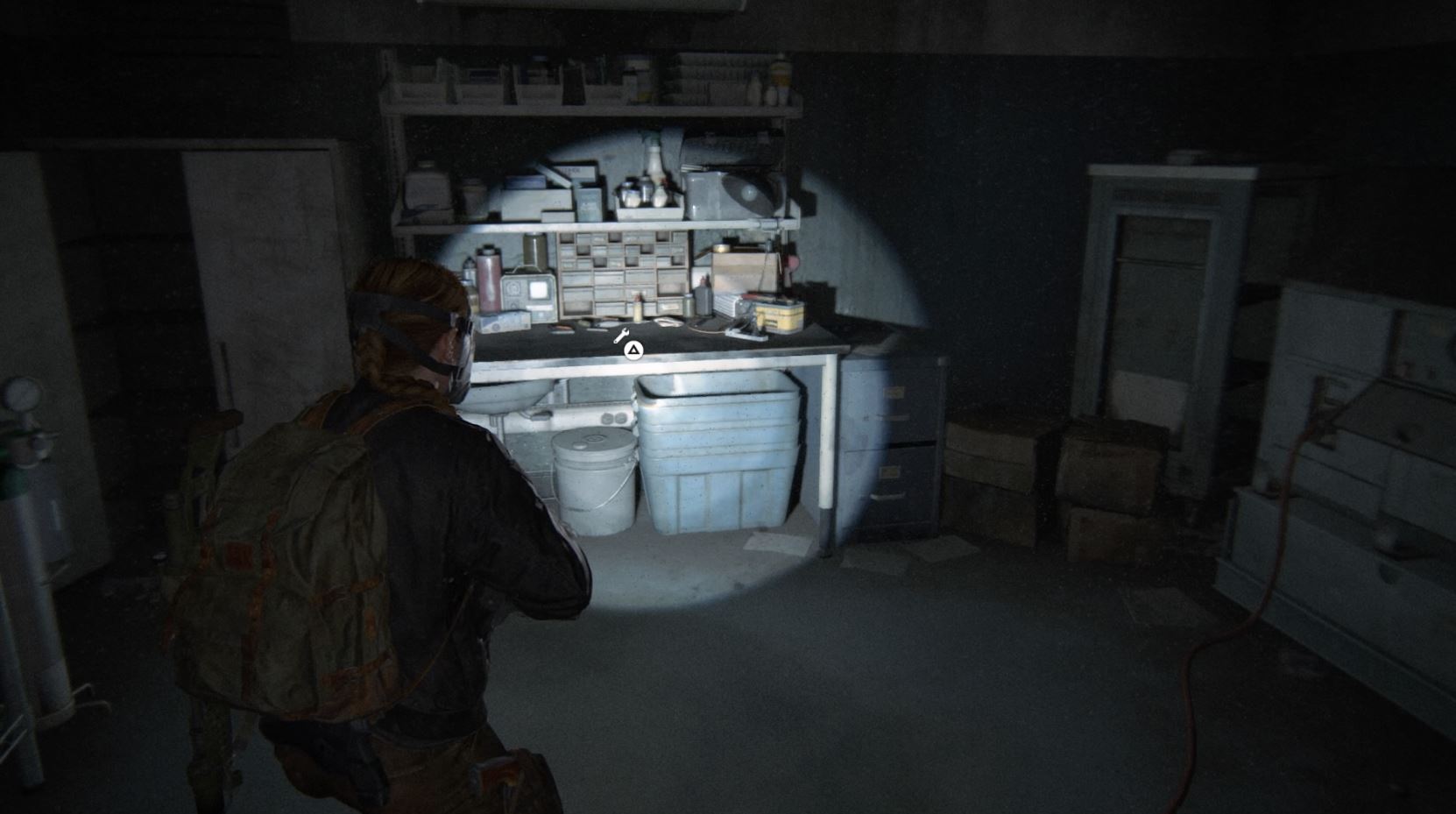 After you hide from the two Seraphites running down the hill and you pass the lookout tower, look to the chapel on your right for a note on the wall. In the building across the trail from the chapel, there’s another note on the bed to your left as you walk in - then there’s 17 supplements on the shelves next to the bed - and a Workbench. 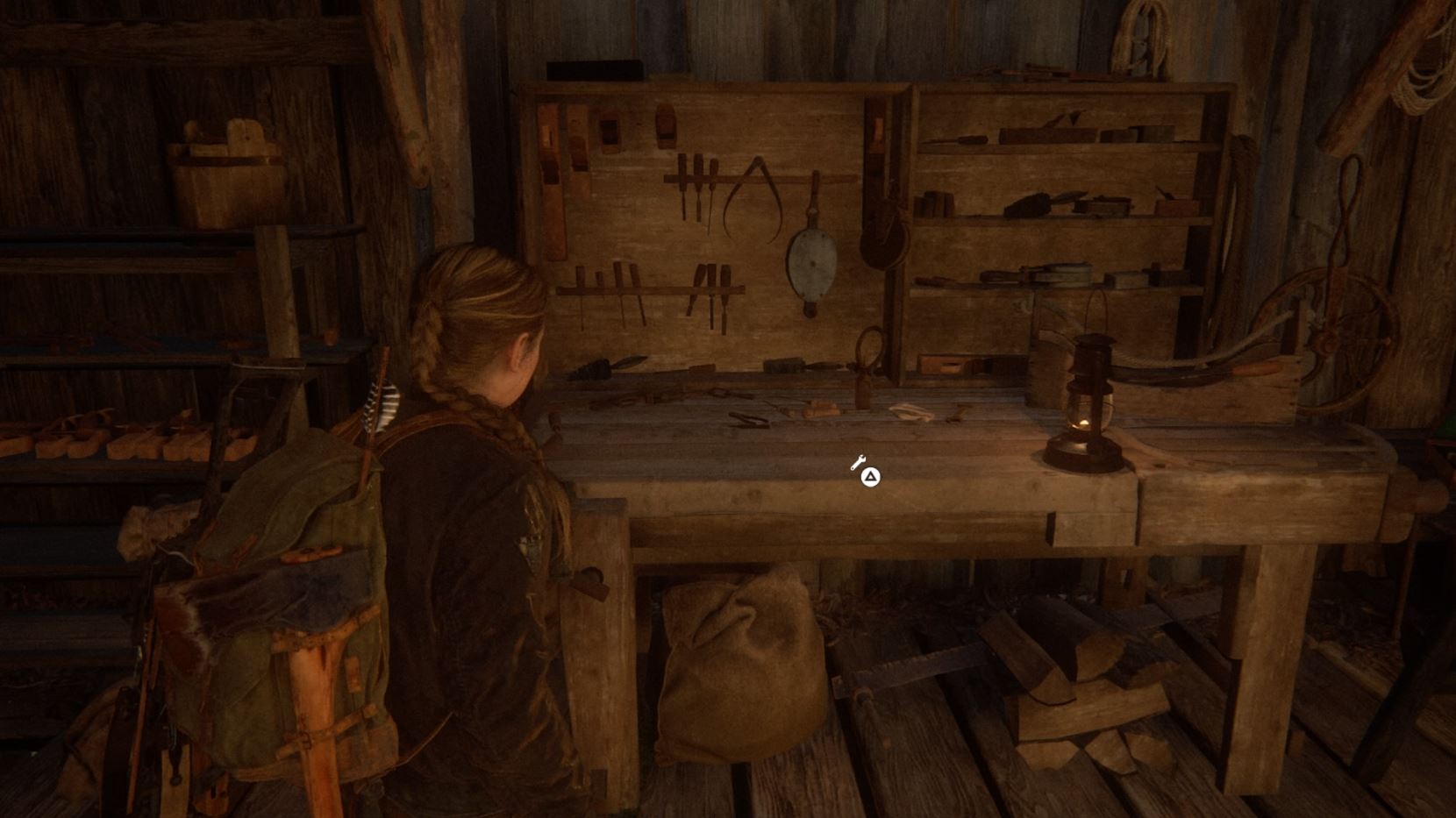 A while later, after the wolf fight, you'll rush to climb into a building and there’s a workbench right in front of you. 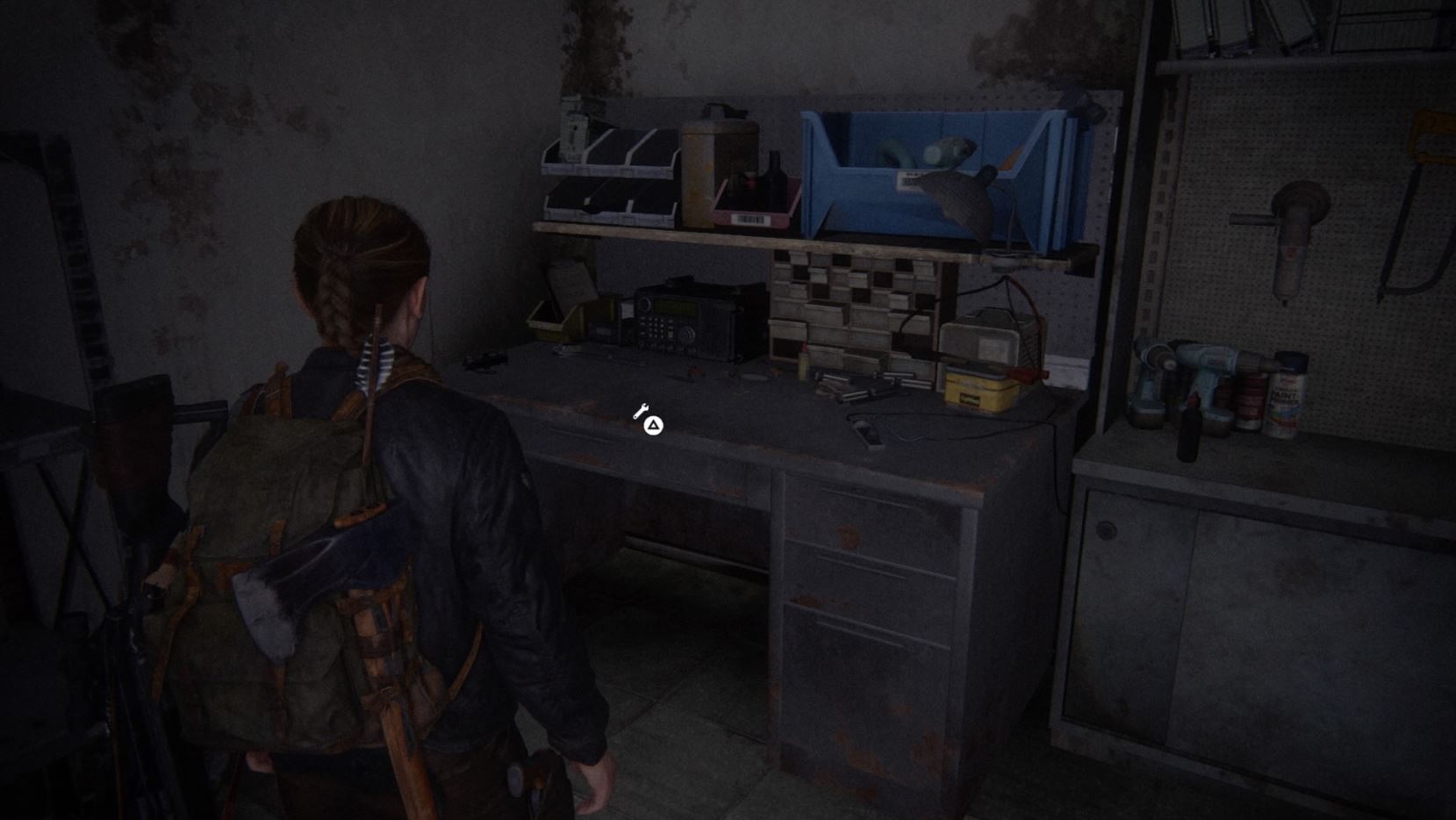 As you make your way up to the big gated house, deal with the clicker on the roof, then enter through the window with the red rag hanging out on the right - in the kids bedroom on the right there’s a superhero card on the desk, then 8 supplements in the bathroom next door to the kids room. There’s a note on the kitchen island downstairs with the shamblers, and a Workbench in the kitchen. 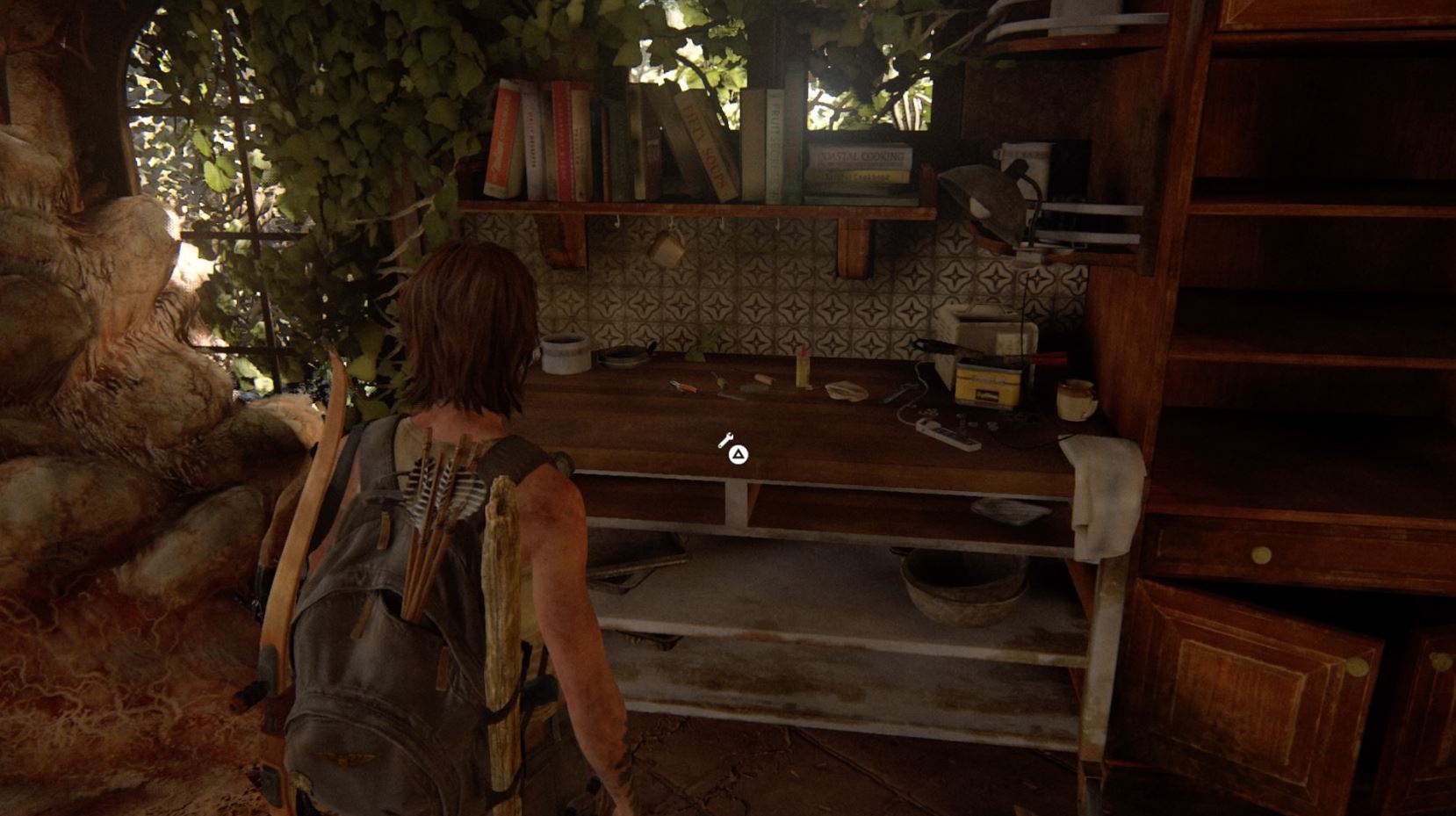 The last Workbench is found a few areas later, in the central building next to where the two Rattlers were teasing the runner when you enter their camp. This is where I got the Prepared for the Worst trophy! 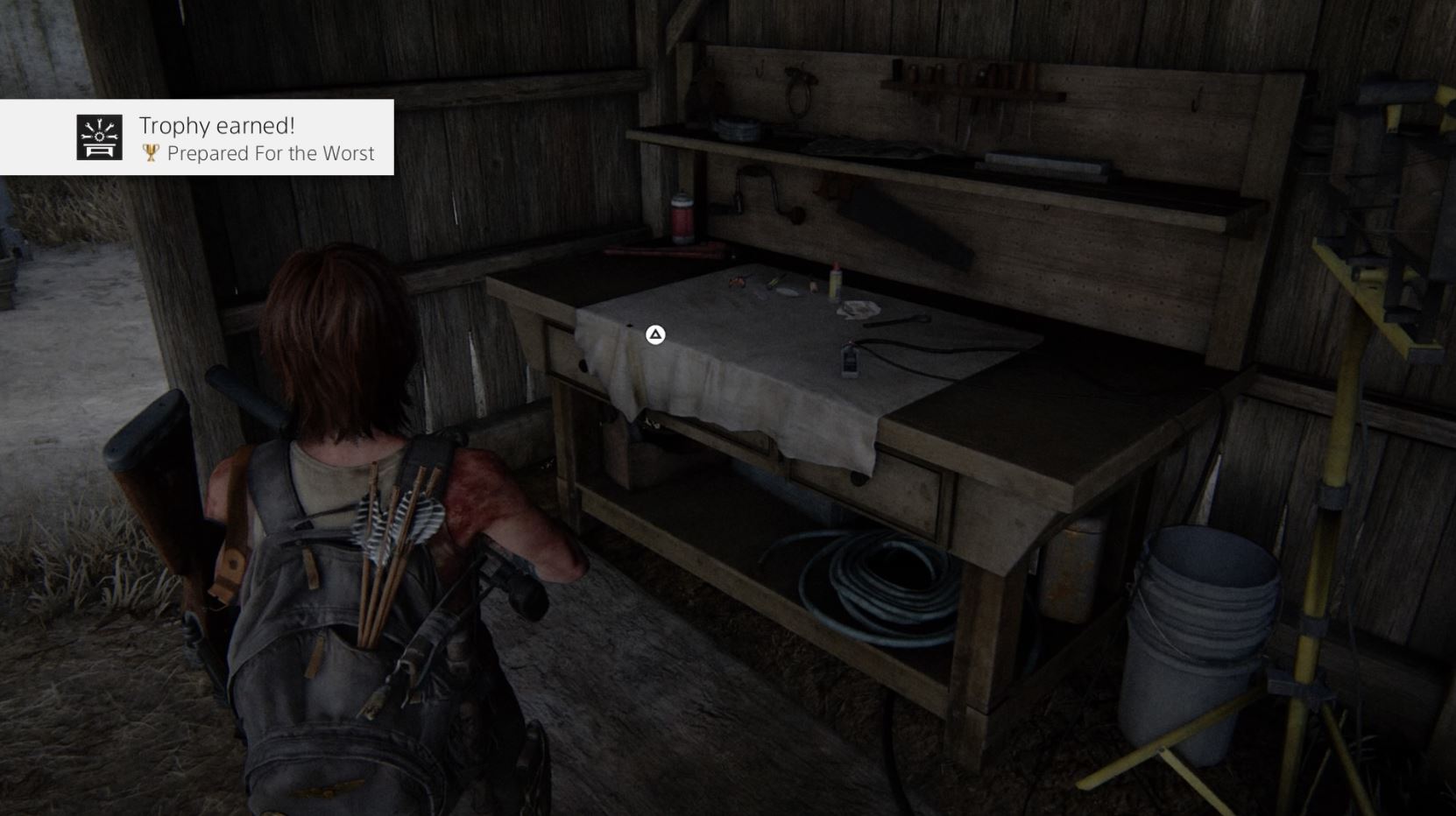 For more help with The Last of Us 2, here's our page on where to find every single superhero trading card.

While we also have pages on where to find all of the training manuals, and every safe combination in the whole game.