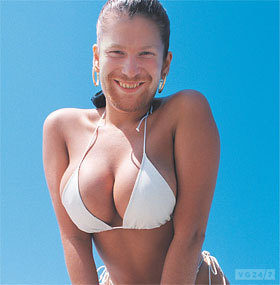 Aphex Twin is the alter ego of Richard D James, a British musician famous for surreal composition and general oddness. His work is amazing and bizarre. Listen to his Analord series for free.

Remember Me audio head Olivier Deriviere is a huge fan of British acid-techno act Aphex Twin, the alter ego of reclusive musician Richard D James. Using James's work as inspiration for Remember Me's soundtrack, the French composer produced something far removed from the usual triple-A beats. Aphex Twin is mainly famous for weirding-out the 90s with Come to Daddy and Windowlicker, but for Deriviere he's a full stop in dance music's evolution.

"He is ever the god of electronic music to me," Deriviere told VG247 in Paris. "He tried so many things. It's glitching, not dancefloor. It's music. It's not just about moving your body."

Remember Me, Dontnod's first game, tells a future tale of mental management and digital dystopia. Facing a memory-wipe and a plot of revolution and resistance, protagonist Nilin spends the game clambering around Neo-Paris, solving puzzles, conquering enemies, and re-patching her past. While it's essentially an action-adventure, the project presents a solid, unique vision of what may be next for humanity. The concepts involved are unusually challenging for this type of game, as is Deriviere's composition. Aphex Twin is hardly "easy listening".

"Usually music is very understandable," he said. "You do have a main theme here, but she's confused. She's lost everything. She's a bug, an errorist, and the music has to reflect that. The main theme has one synth and one voice, which is Nilin, digitalised and singing. The two morph into each other."

The artist is aware of the dangers of shirking trends.

"It's a risk that creative director Jean-Max took, and I gave everything I could. I knew the risk was big. It's still big. I'll wait for the reception to see what people think about that, but I'm just glad that something different exists."

He added: "Sometimes the music went too far. In the first two episodes the music is very acoustic, as you're in Neo-Paris and the humans are still there. It's warm. But the more you go through the game the less acoustic the music is, the more screw-up it becomes. It's to avoid normalisation."

Lay off the drukqs, man

The rich and powerful of Remember Me's future control the lower classes with ease. Wealth disparity has crushed segments of society, but a veneer of choice - and access to purchasable memories - prevents rebellion. It's as much satire as future-gazing, and Deriviere was careful to reflect the theme's subtlety.

"It's not a dark, serious tone that we have," he said. "It's kind of beautiful, contemplative and seedy. Memories can be digitalised; you can take an organic form and change it to a digital form."

"I gave everything I could. I knew the risk was big. It's still big. I'll wait for the reception to see what people think about that, but I'm just glad that something different exists."

Deriviere represented this by distorting acoustic music with "electronic processors". The sound will be instantly recognisable to Aphex Twin fans.

The concept also worked in terms of Nilin, who Deriviere described as a "glitch". To explain, he sang a note which accelerated then returned to normal, a little like a motorcycle passing when you're drunk.

Buggy. But while it's all very well waltzing off with your Aphex acid, the central concern of the developer must always be you, the player.

"The player has to relate to everything that happens," said Deriviere. "To do so with the music is to give the players a sense of reward. Anything you do, anything you succeed in doing, the music will support. It's like a candy bar: 'good boy, you did it.' And never the same candy bar.

"There's no normalisation. You never have the same feeling as a player."

Combat was a specific problem for Deriviere. He didn't want there to be 'fight music,' but more than half the game is spent in conflict. He eventually developed a system that is "completely organic," with loops emerging depending on how the player behaves. Each completed combo is accompanied by a different piece of music.

Remember Me shows promise, thanks in significant part to its music. Blind your ears with Aphex Twin while you wait for the June release.