Arthur Morgan is standing in a general store, shoving cheese into his face and downing bottles of rum like an animal. We knew there would be a practical benefit to the stylish mutton chops we shaved into his face just moments before.

He’d been trekking, murdering, and hunting his way across the frontier all day and was feeling a bit sluggish. His shoulders slumped, his gait changed, and everyone he passed told him he looked like shit. Cheese was the answer. Cheese and alcohol.

Red Dead Redemption nailed what it felt like to be a gunslinger in the Wild West, but John Marston didn’t have needs - at least not outside of the story. He had character, sure, but he didn’t feel human. Red Dead Redemption 2 aims to simulate what life might have been like for an outlaw living off the land in the untamed American frontier.

Arthur needs to eat, he needs to rest, and he needs to wear a jacket up in the cold mountains. If he gets covered in mud, blood, or some unholy mixture of the two, he needs to wash. If he doesn’t want to look like a yeti, he has to trim his hair and beard, which grow in real-time. If he eats too much, he packs on weight. If he runs a lot, his stamina increases. 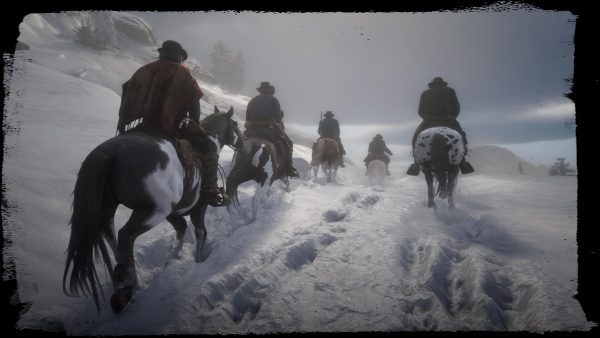 My demo begins with an early mission. Arthur and the Van der Linde gang are hiding out in the snowy peaks after a botched robbery in Blackwater. The plan is to lay low for a while, then head East once the heat dies down. That is, until gang boss Dutch Van der Linde gets wind of a money train passing through.

Straight away, the attention to detail is striking. Red Dead Redemption looked phenomenal at the time of release, but it seems barren and flat in comparison to RDR 2’s world. There’s varied topography everywhere you look, landmarks pepper the horizon, and the world feels alive. Rabbits scarper out from bushes, birds soar overhead, and the wind sees snow swirl through the air like dust. The snow, Dutch’s jacket, the horses’ tails, and the little string tied around Arthur’s hat are all physically simulated. The Rockstar reps tell us each tree in the map was individually placed. We believe them.

It’s up to you how you admire all these details, whether from third or first-person. The HUD is stripped back and fully customisable, too. You can choose between a couple of different-sized radars, or you can turn the radar off altogether and rely solely on the big map you can open at any time from the pause menu. Controller prompts only appear when you need them for contextual actions, such as tending to your horse or retrieving items from it. You can only carry what Arthur and his horse can physically carry - there are no bottomless, invisible pockets here - and you can switch between firearms, knives, and throwables from a weapon wheel.

Our mission sees us setting up TNT on the train tracks, but the thing doesn’t go off and we’re forced to leg it after the train and jump down onto the roof. Arthur and another gang member stealthily take out some lone guards, but things soon turn shooty. This is where we see the reworked Dead-Eye system in action, which can now pick out vital organs and slow down time when fully upgraded. A click of R3 sees the action slow to a crawl, Arthur paints his targets with R1, then unleashes a hail of bullets on a trio of enemies, dropping them with precision. 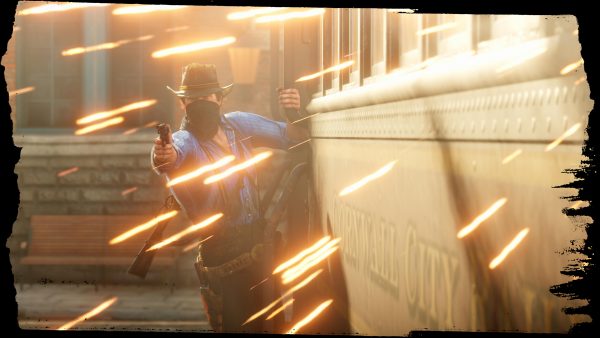 Even outside of Dead-Eye, gunfights are brutal and immediate. A single shot to the head or the center mass is enough to put anyone down - don’t expect bullet sponge enemies here, even with all the new, RPG-esque systems. Particularly well-placed shots trigger a cinematic kill-cam so you can appreciate your handiwork. At one point, Arthur is walking through a carriage when a shovel hits him in the face, knocking his hat off with a clunk - an enemy was hiding in ambush. A fistfight ensues, complete with full facial deformation. Arthur beats his opponent to a pulp.

Once the fighting is over, Arthur stops the train and the gang makes its way to the cart that’s packing the goods. Thing is, it’s locked, and the guys inside won’t open up. The outlaws shoot up the side of the carriage, place some TNT on the door, and crack it open like a vault.

Arthur steps inside the grandiose, furnished carriage interior and picks the place clean, securing some bonds. It’s here where Arthur is offered a choice. The people who were in the carriage are on their knees outside, and Arthur can shoot them, let them go, or take them hostage. This section of the demo ends before he makes his decision.

Time moves forward and we’re taken to a later point in the game. The gang has moved East, we’re out in the open world, control is passed to us, and we’re free to explore. The first thing we encounter is the sound of a man screaming. 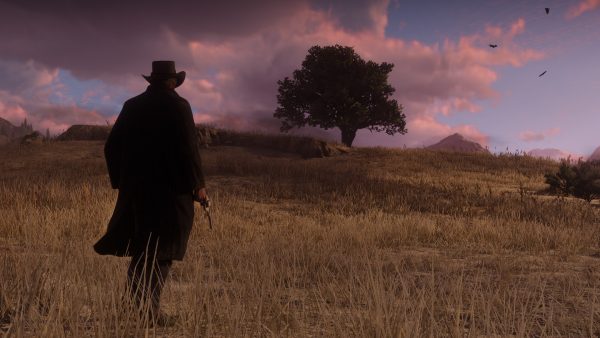 When we find him he’s writhing around in pain. Turns out he’s been bitten by a snake, just one of hundreds of random events out in the world. We decide to suck the poison out out of his leg. “Don’t tell anyone about this,” Arthur says as he spits the venom on the sand. Our horse takes a massive shit.

As we’re admiring that bit of procedural animation, a deer skits by. We pull out our rifle, aim, and tag it in the side. It limps off, wounded. We track it down and finish it off, hop off our horse, and interact with the creature to skin it. Arthur actually skins the creature: he digs his bowie knife into its stomach, cuts a line across, and unfolds its skin before rolling it up. It is grisly. We walk to our horse and stow the pelt on its rump. We then walk back to the fleshy carcass and throw it over our shoulder before tying that onto our horse and riding towards the nearest town.

Once the meat and pelt are sold, we make our way to the general store for the aforementioned cheese and alcohol binge before heading back out into the township. Arthur breaks into song, emboldened by the rum. We lock onto a nearby NPC, and have the option to ‘greet’ or ‘provoke’ them. We’re a drunk cowboy, so obviously we provoke. “You smell like your shit took a shit,” Arthur shouts at them. “I don’t want any trouble, mister,” they reply. Arthur keeps at them until they eventually run away. This is when we notice he’s still covered in blood and looks like a serial killer. 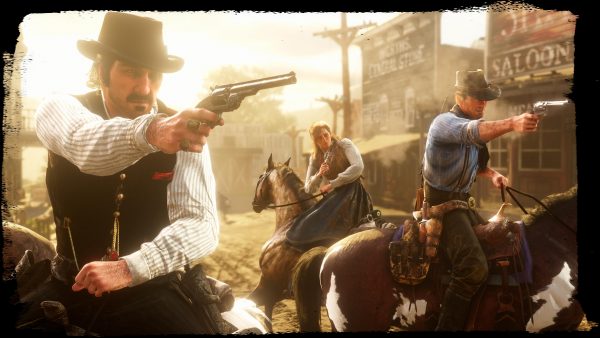 You can be friendly, aggressive, or hold up any NPC in the game. These conversations, depending on what choice you make, are all contextual, and they happen in-game, rather than inside static menus. NPCs take into account what you’re wearing, how rugged you are, whether you are visibly armed or not, where you are stood, your honor rating, what is happening around you, and, of course, whether you have animal blood all over your face.

At one point, we are exploring a beautiful riverbank and we see a gold prospector draining water into a basin. We decide to see what he’s up to. Arthur greets him with a “Howdy,” and the prospector tells him to piss off. Obviously, we stand closer to him. “Would you mind getting out of my face?” He says. We choose ‘provoke’. “I’m mighty fine right here,” Arthur replies. The prospector loses it and tries to drag Arthur off his horse, so we hop from the saddle and smash his face in before dumping him in the river where he floats away in the current. We probably should have checked his body for gold first.

Of course, this situation could have gone differently. Arthur could have de-escalated things, shot the guy, or he could have simply rode away. It’s nice to have a way of interacting with the world besides violence, and there were plenty of moments in our demo where we hat-tipped passers by and had pleasant conversations, each of them different and making sense in the context of the scene. Arthur is an outlaw, but you can play him as an honourable rogue if you want. When he’s not murdering people with dual revolvers, there's a kind-natured side to him. You can see it in how he treats his horse. 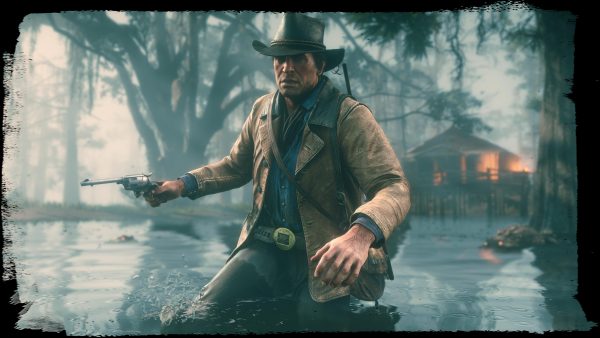 There are a number of ways to interact with your ride. If you strap a kill to its back, you better wash that blood off once you sell the meat, lest you attract predators. Want your horse to perform its best? It needs food and love. The more you interact with it, the better your bond becomes. With a better bond, you can even partake in some dressage. You can also whistle to your horse from greater distances. Your steed won’t teleport to you like in most games, it has to manually make its way to you. Oh, and your horse can die permanently.

If you fatally injure your mare, you can revive it with a special kit. If you don’t have the kit, you might have to trek into town to get one before your horse bleeds out. Everything in Red Dead Redemption 2’s world is built to fold into some other system, creating emergent moments where the world generates anecdotes, even outside of missions.

When you walk into your base camp - which moves around the environment as the story progresses - your gang members talk to you there as well. They don’t wait for a specific story moment to activate, they react to you like any other NPC, perhaps complaining that you came into camp smelling like shit, or kicking off because the camp is low on food supplies. Engage with their needs and you get rewarded for it, but it’s completely optional and is just another touch that makes the world feel alive.

Sandbox games are everywhere in 2018, but nobody does it quite like Rockstar, and Red Dead Redemption 2 could be the most reactive, surprising open-world game yet. I can’t wait to explore it more when it releases for PS4 and Xbox One on October 26.