Make no mistake, Pokemon Let's Go Pikachu and Pokemon Let's Go Eevee aren't the foundation-shaking next-generation Pokemon games hardcore fans have been waiting for, but experienced trainers will find a lot to love in this nostalgia-driven spin-off. Newcomers and lapsed fans will likewise find an approachable and exciting adventure with hidden depth.

Oh, to be a fly on the wall of the offices of The Pokemon Company and Game Freak these last few years. In 2016 the future likely felt uncertain; the Wii U had flopped, and it's unlikely anybody truly predicted the barnstorming success of Pokemon Go. For a time it felt like Professor Oak and company might lurch towards mobile, but then came the also-huge success of the Switch, all while Pokemon Go moved from strength to strength. Thus the series was torn between mobile and Nintendo's latest platform.

The house that Pikachu built has settled on an elegant solution of sorts in Pokemon Let's Go. While Go continues to grow adding things like new Pokemon generations and ever-escalating raid battles and community events, Let's Go exists as a halfway house. While fans wait for a new 'fully fledged' Pokemon experience, this pseudo-remake of a 1998 Game Boy classic weaves in design elements from Pokemon Go in an attempt to draw more casual players over to the 'proper' games. This has caused about as much fan belly-aching as you'd expect - and that is to say a lot.

I've now experienced a good forty-plus hours of Pokemon Let's Go, battling my way through Kanto's eight gyms, beating the Elite Four and pressing into increasingly difficult post-game content. To fans, here is the headline as far as I'm concerned: this is not the soulless, stripped-bare experience you have feared. Yes, some more complex elements of previous games have been removed, but the result is a game that feels surprisingly appropriate: as Pokemon stands at a crossroads, Let's Go looks back to its earliest past and also forward to a future that, inevitably, has been influenced by the success of Go.

The biggest change in Let's Go Pikachu and Eevee is the switch to a Pokemon catching system more reminiscent of Pokemon Go. Instead of random encounters, creatures are seen out on the world itself. Collide with them and you're booted into a catch scenario, where rather than a battle you toss Poke Balls and other incentives to try to coax the Pokemon to become yours. The catch system mirrors Go fairly closely, and plays out just fine regardless of if you're using the Poke Ball Plus, a Joy-Con with motion control or just button-based controls. It's worth keeping in mind, too, that some major Pokemon encounters do require you fight them first just as in the classic games.

This system has a huge knock-on effect on the rest of the game. In previous games unless you were grinding for a specific set of stats there was little incentive to repeat-catch Pokemon you'd caught once before. In Let's Go this act is actively encouraged. There's even a combo counter which ticks up as you catch multiples of the same species in a row - and each time that counter ticks higher, the next of that species you encounter will be more likely to have higher stats or even be a shiny Pokemon. Catching Pokemon nets your currently-equipped party of beasts with experience to level them up, and then as in Pokemon Go sending your unwanted duplicates back to the professor will net you candy which can then be used to boost the stats of your favourite creatures for battle. 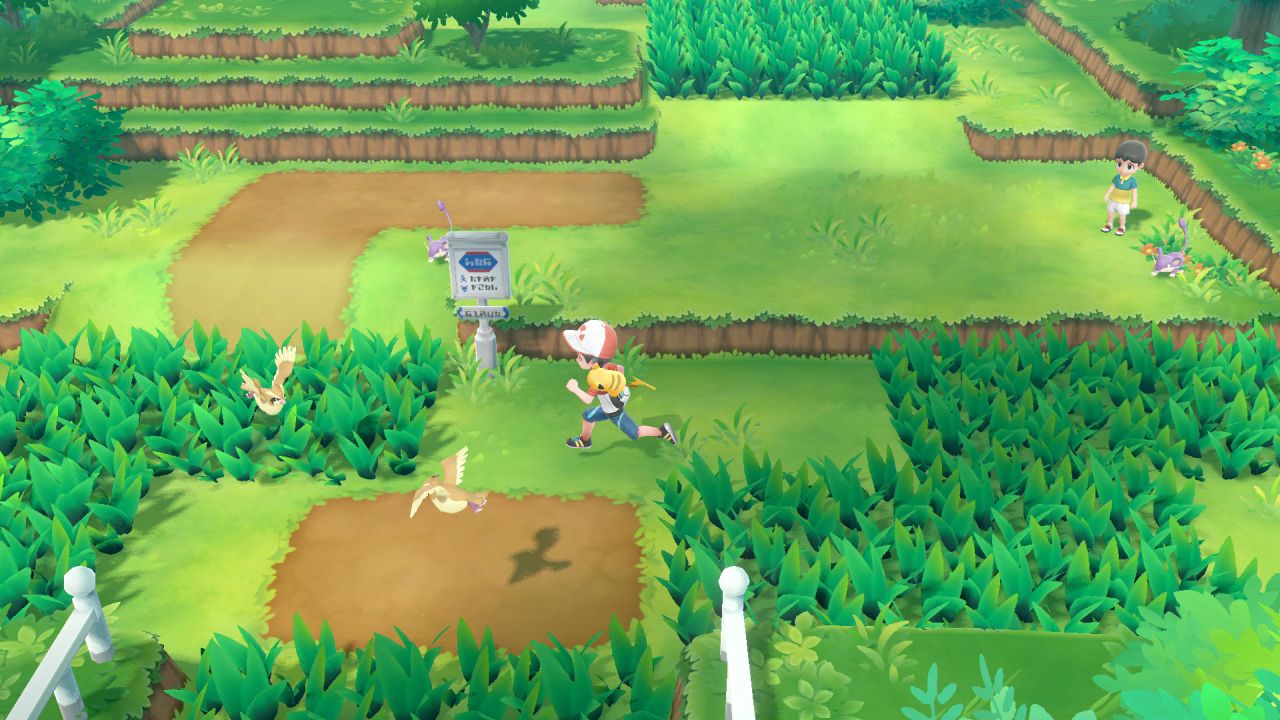 It's a significant change of pace for Pokemon, and it's one I actually like: Pokemon out in the wild can be easily avoided, but due to the simplicity of catching you'll also often be seeking them out for those bonuses. I honestly think it works tremendously well.

Trainer battles remain untouched, however. There's none of the two-move, button-mashing combat from Pokemon Go here. It's the same four-move, stat-driven turn-based RPG action Pokemon has always been. While Let's Go Pikachu and Eevee are based off Pokemon Yellow, most major additions from later games are intact here too. Pokemon build a bond with you over time that mean they'll sometimes heal status ailments, withstand fatal hits or land critical hits, for instance, while expanded types are present, with the game even knowingly nodding to the concept that TMs of the most recently-added Fairy-type are rare in Kanto and so on.

In truth the battle changes for Pokemon Let's Go are ones that will primarily impact the most dedicated hardcore players, especially those into the idea of breeding the 'perfect' Pokemon with pristine stats for multiplayer. This is why The Pokemon Company has knowingly kept their sponsored competitive events on Pokemon Ultra Sun and Moon, and it makes perfect sense. My point is this, anyway: I had a lot of fun with Pokemon Let's Go's battle system for what it is, a battle system more focused on play for fun against friends or play against AI than anything too serious. 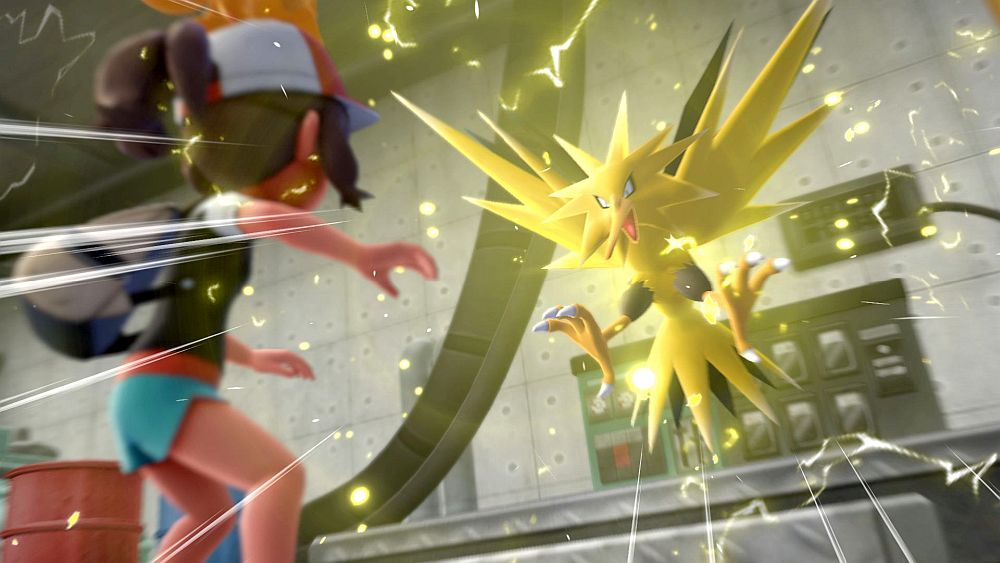 From all the worried braying after Let's Go was announced, I'd sort of expected it to be a more aggressively 'casual' Pokemon experience, but it really isn't that much. It lacks the deep, high-end nuance, but it also plainly knows it isn't that sort of game, instead aiming to hit the Pokemon notes that lapsed fans remember. That's why this being a soft reboot of Yellow makes sense - the world of Kanto is familiar, as is its music. When Team Rocket show up, they're of course represented by Jessie and James from the anime. Given I was ten years old when I first laid hands on Pokemon Blue, it's a nostalgic, relaxing comfort blanket of a game. Newcomers will meanwhile find this return to basics serves the series well, with the simplified approach a lot less cumbersome than the exciting but laborious storytelling featured in Sun and Moon.

When all is said done, Pokemon Let's Go is still exactly what you'd expect from this franchise. That explains some of the fan reaction, perhaps - Let's Go is trapped between fans hungry for more of what they already love and those keen to see the series really do new and different things. I've fallen firmly into the latter category for a while now, but Let's Go ended up being something really unexpectedly needed for me: a nice nostalgic palette cleanser before a hopefully significantly changed Pokemon experience next year.

Back when I played a very limited slice of Pokemon Let's Go Pikachu and Eevee at E3, I concluded that it'd likely be pleasing to players who went in knowing and accepting what it is - a simpler, cutesy spin-off and not the next main entry in the series. What's surprised me most about reviewing it is that I hadn't fully made peace with that fact and yet I loved this game anyway - something that's arguably a testament to how well it executes on its vision.