Let me tell you something here. Listen close. Yoko Taro is as much a visionary video game director as, say, Hideo Kojima. I’m not exaggerating here. If you you look at the ideas expressed in the Drakengard and then Nier games Yoko has written and directed, there’s ideas and experimentations as bold and fascinating as anything Kojima has attempted with protagonist switcharoos, reading memory card data, or inventing the ‘strand genre’. You wouldn’t know it, though - Yoko generally made such niche, low-budget games that his genius went unnoticed.

But then 2017’s Nier: Automata happened. By this point Yoko had honed his skills on four titles in the universe that Drakengard and Nier share, and crafted a sharp, smart story with a big heart and a ridiculous sense of humor. His stories and how he uses the unique elements of the video game medium to tell them was always a winner; but by pairing it with the action chops of PlatinumGames, he was able to blow the doors off. Automata was a smash hit, and has gone on to sell over 5.5 million copies. That’s low-end Final Fantasy numbers - of course Square Enix took notice.

That’s how we got here, to the impending release of Nier Replicant ver.1.22474487139, which is essentially a remaster of 2010’s Nier, a deeply flawed classic that walked so that Automata could run.

If you’ve never played the original Nier, which I assume is true of many reading this, there’s a lot to unpack here. The original features Yoko’s unique writing and world-building, and incredible music led by the brilliant Keiichi Okabe, but it was developed by Cavia, a now-defunct Japanese studio that definitely didn’t have Platinum’s action experience. Short of an expensive remake, the idea of bringing this game properly in line with Automata isn’t really realistic.

To make things more complicated, the original Nier actually had two versions: Gestalt and Replicant, which are slightly different sibling games. Gestalt cast you as a father trying to cure his diseased daughter; Replicant as a brother doing the same for his sister. The former version was what the West got, and only allegedly because the US branch of Square Enix intervened and asked for an older, gruffer, more easily marketable protagonist. This time around, Yoko gets his way for his original vision - and for us in English, this’ll be the first time the brother-driven Replicant story is told - which means an all-new localization with new voiceover from new and returning cast members. 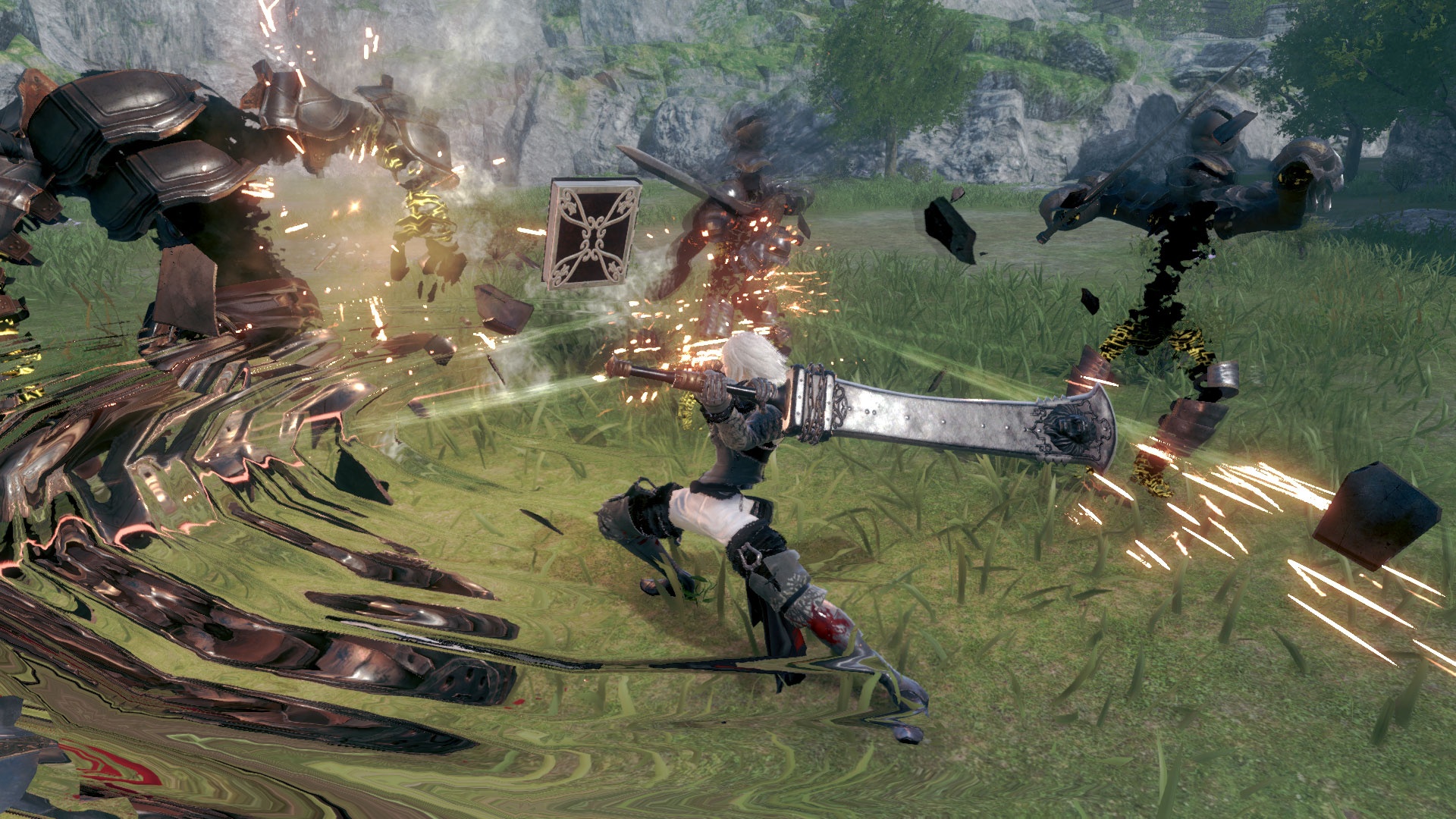 I’ve now played a few hours of Nier Replicant ver.1.22474487139, and have also completed the original multiple times. If you’re coming to this as a fan converted by Automata, here’s what you need to know.

Here’s what to expect:

And here’s what not to expect:

If you go in with these expectations understood, you’re far more likely to have a blast. All of these things are fine, too. In fact, going into the Remaster I wasn’t quite sure how far they’d go - slickly-cut trailers don’t give you a very good idea of how the combat moves, the weight of it, or how the camera might handle. I'd sort of half-expected a truly major combat overhaul that might even push this towards remake territory. The answer, though, is that it all feels fairly similar to the original, though everything has been tightened up. It also benefits enormously from a presentation with a stable and high frame rate. 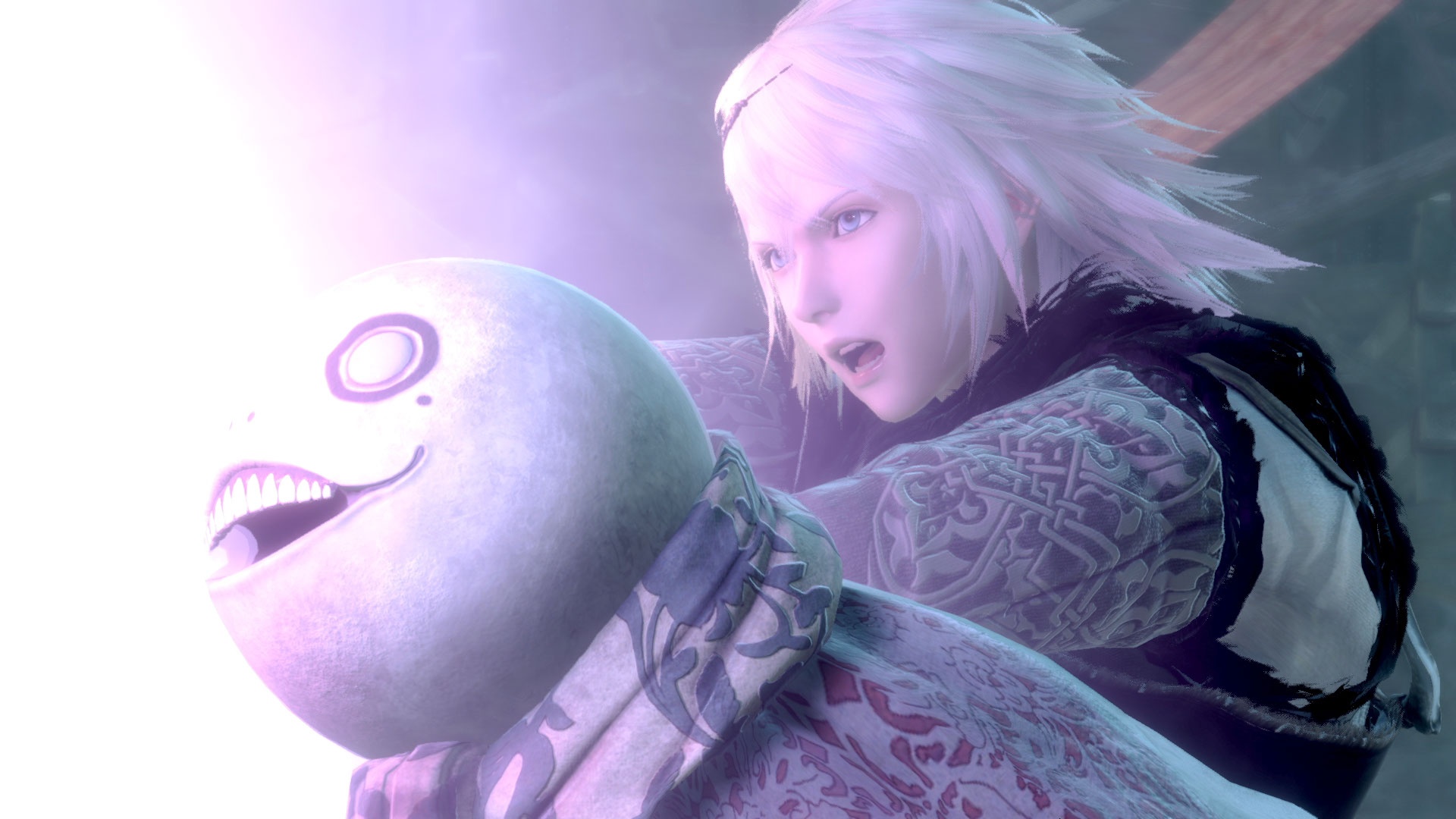 Automata this ain’t, but that’s… fine? It isn’t supposed to be Automata. Nier Replicant is its own game, with its own wonderful mish-mash of genres and ideas. Some of these ideas, like an obsession with dropping bullet hell style sections into both full 3rd person and fixed camera segments, are present in both titles. Others are not. And that’s okay.

At times, the mildly tweaked battles of Nier Replicant have some of that thrill its successor gave. Battling robots in an early dungeon known as the Junk Heap, there’s flashes of that sequel. But equally, there are enemies with attacks that just don’t feel as well telegraphed, therefore making them inherently less fun to dodge and weave around. These are problems that didn't even feel as obvious in the original because so much else was off with its combat thanks to rough performance. Now the performance is fixed, you can sense the ways in which the combat fell short and was then fixed in Automata more clearly. There’s a give-and-take with Nier; it was never perfect.

Even where things aren’t as slick as the sequel, it remains difficult to stay mad at Nier. You might want to scream when the camera annoys, leaving enemies out of sight as they wind up to attack you. The improved but still occasionally sluggish feeling combat isn’t a patch on the agile Automata. But quickly, you end up looking at other elements of this game like its brilliant narrative or the deft way in which it coherently pulls wildly disparate styles of play together, and you just have to forgive it.

One of the biggest problems with the original was its look, too - and that has been dramatically overhauled. This is the area where it’s dragged most in line with its successor, with visual improvements across the board and even some decently significant character redesigns. In my now almost eleven-year-old review of Nier Gestalt, I described it as sporting “flat, boring areas with muddy textures”, and looking back the original was pretty exemplary of that very brown period in video game history. It’s amazing what a coat of paint can do, though. 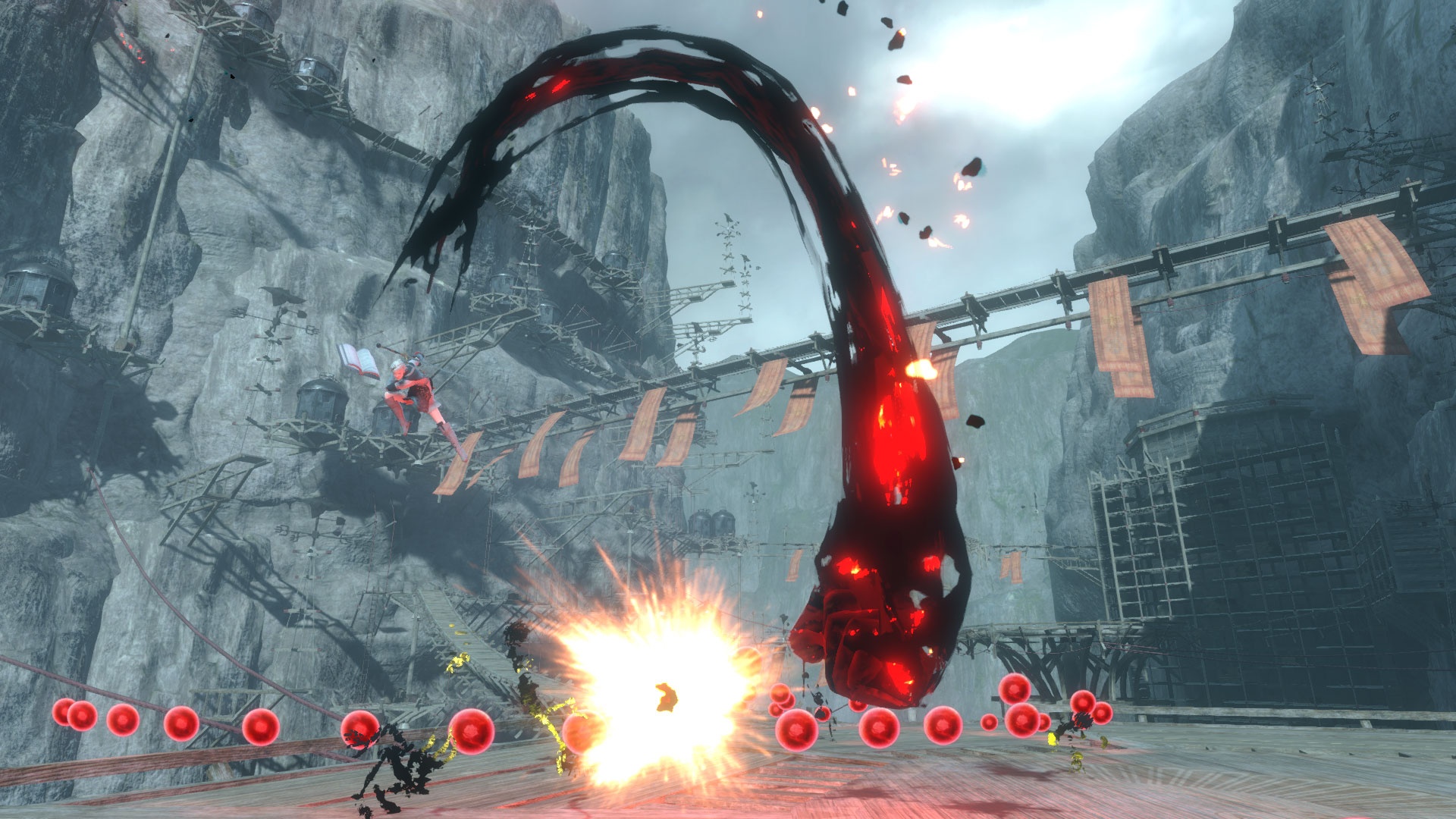 Higher resolution textures and a generally brighter art style bring the world to life far more, and it’s now a place I want to inhabit for more than just its characters. In places I still wish the environments were clearer - on one occasion early on I had to google a let’s play video of the original because the level design didn’t make it truly clear where I was supposed to go next. That’s a problem authentic to the original, which speaks to how far this remaster goes - improved looks, music, and even story execution in places, but the same world layout geometry.

The characters and narrative remain the best of Nier. I’d forgotten how much I loved this story and characters, especially the self-important sentient book Grimoire Weiss, who is a constant companion.

While under the terms of this preview I can’t get into too much detail - and nor would I, because this is a story that shouldn't be spoiled - I will say that I actually quietly think could be a more compelling story than the much-loved Automata yarn, at least based on the strong emotions stirred in me by replaying the early phases of the game I've seen so far. There is surely less finesse here, but there is so much heart that doesn’t really matter. It hits the ground running and beautifully bludgeons you with intrigue, characters that endear, and questions you’ll be desperate to learn the answers to. Again, this’ll keep you going even when rougher elements rub you the wrong way. 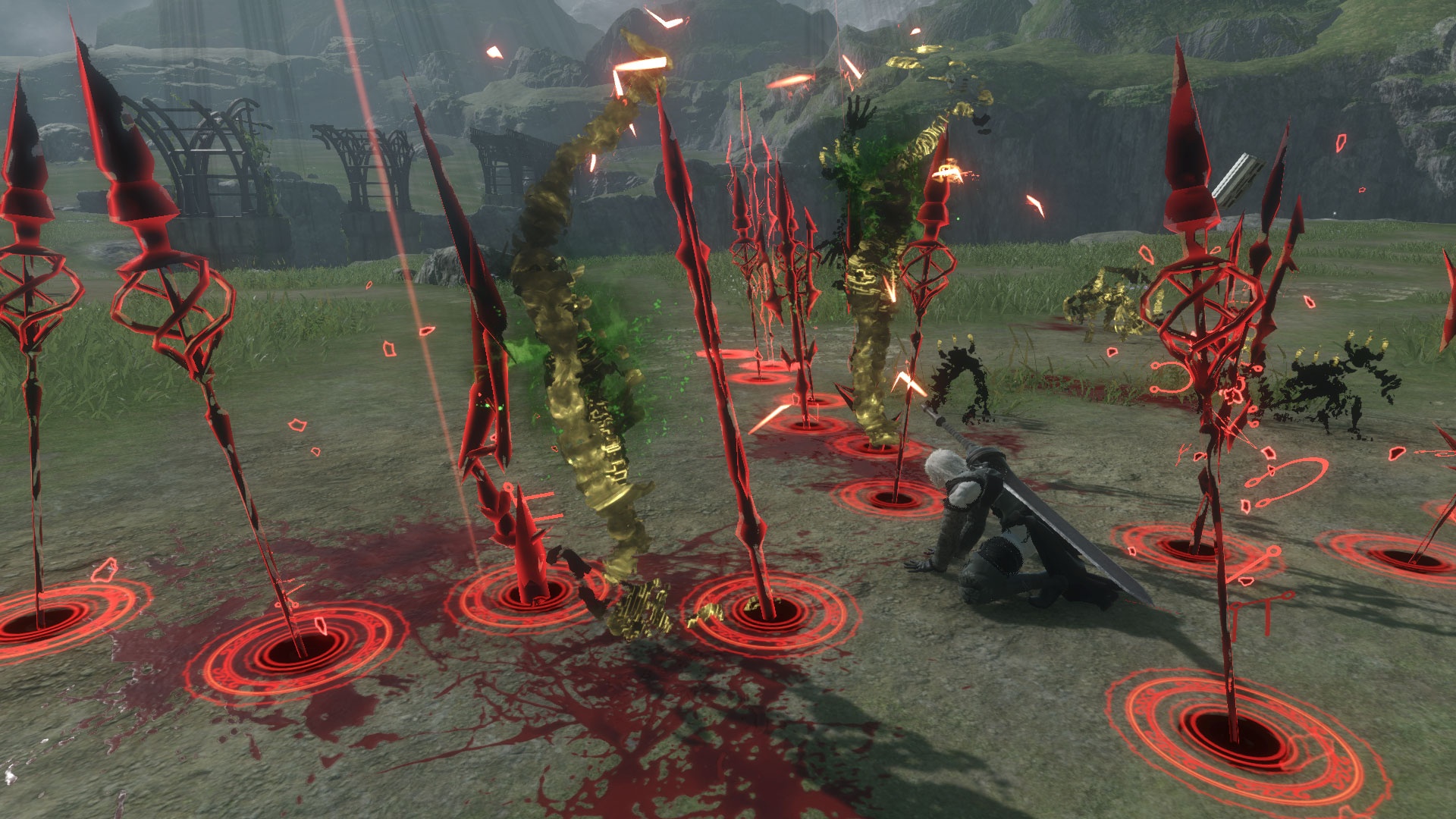 And so, for now, those are my initial thoughts on Nier Replicant ver.1.22474487139 based on several hours with a non-final version of the game. There’s plenty more to be said about it as we get closer to its final release, but it’s a difficult game to talk about - despite being eleven years old, there’s much that shouldn’t be spoiled, but instead only experienced.

As a remaster, this is a competent effort to take a flawed cult classic and improve it without going as far as completely redesigning huge chunks of the game. Some perhaps would’ve wanted that - but if this preview has shown me anything, it’s that much of what makes Nier special and unique is baked deep into this experience, warts and all - and I’m glad much of that has been dutifully retained.

This is a game that had already enjoyed a renaissance and re-evaluation as a cult classic in the years following its release, and that makes it an utterly perfect candidate for a remaster. I can’t wait for more people to experience it in this improved form.

Nier Replicant ver.1.22474487139 is coming to PC (minimum specs have been announced), PlayStation 4, and Xbox One, with the console versions of course working on new-gen consoles via backwards compatibility. It's set to release on April 23.