Taking lessons from both its direct predecessor and Injustice 2, Mortal Kombat 11 looks poised to breathe brutal new life into the series.

As the internet was bombarded with a slew of trailers for Mortal Kombat 11, I was getting stuck in to multiplayer. After a good few matches it's safe to say that this latest entry feels like the the best since the series' much-lauded 2011 reboot. It more or less ticks all of the boxes: it looks great, it's slick moving with generally solid performance, and there's loads of gory spine ripping and face-stomping. Most importantly, however, it feels like MK11 is taking solid strides to grow, fix and improve the series.

One of the smartest decisions Mortal Kombat developer NeatherRealm and publisher Warner Bros. has made, it seems, is to shift the development studio between the worlds of Mortal Kombat and DC Comics in an on-off, tick-tock fashion. If you're a hardcore fighter or NeatherRealm fan you still get a new game every couple of years, but it also allows the two series' to constantly feel fresh and allow each to feed off the ideas of the other in a sort of helpful, symbiotic way. This is absolutely plain in Mortal Kombat 11, and the game is all the better for it. 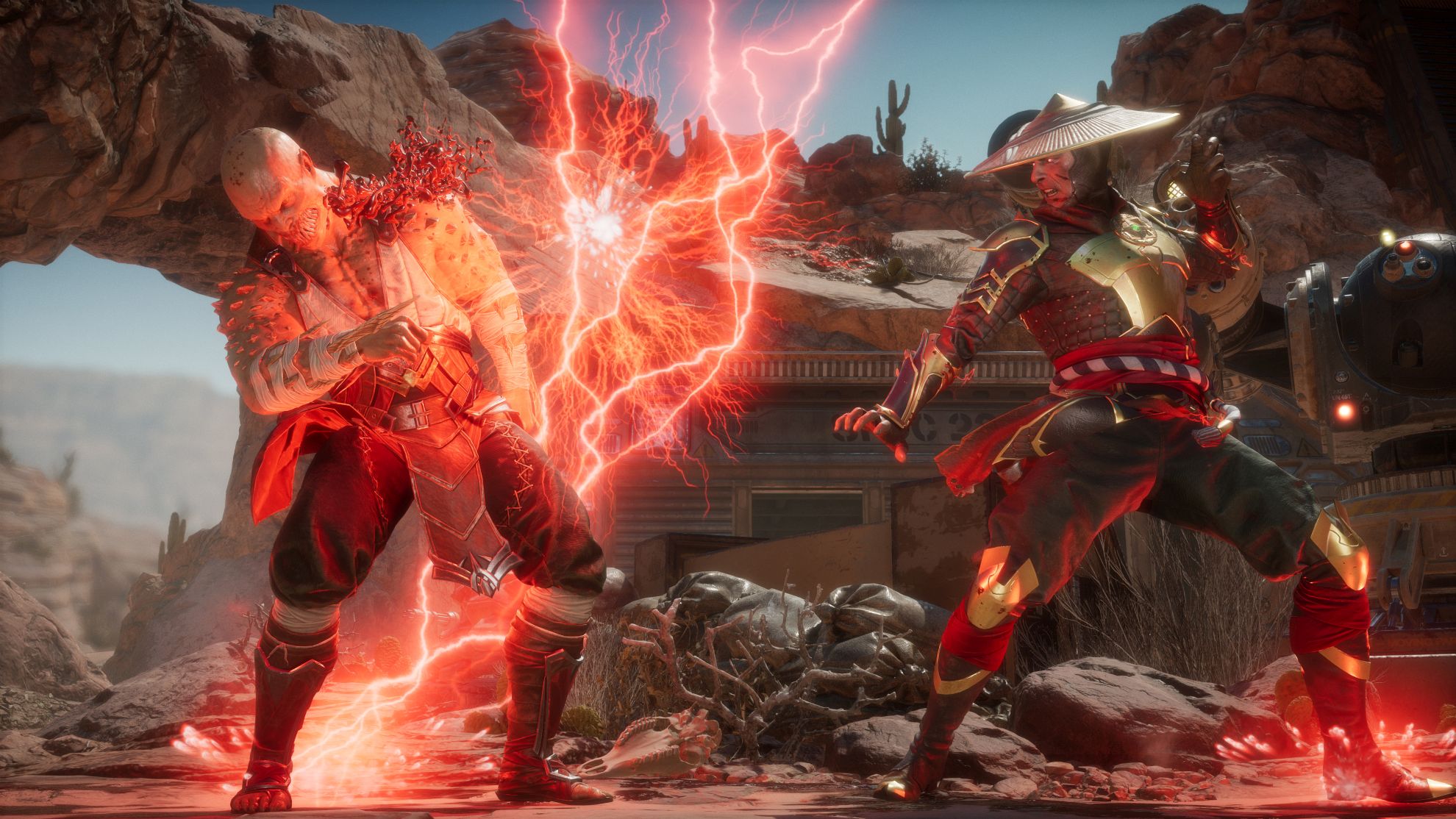 Take gear, for instance. Injustice 2 introduced a gear system where players could collect RPG-style tiered loot through the various game modes and equip it to create a custom version of each character. This is a cool, interesting idea for more casual progression in a fighting game, siloed off away from more serious tournament play, but the idea also just seemed inherently right for Injustice's cast of DC Comics heroes. Batman, after all, is known for a variety of Batsuits and costumes in his various forms - why not showcase them all through gear? After a successful outing there this system has had a few tweaks and now made the jump to Mortal Kombat 11 as a neat new feature. Scorpion has Batman to thank.

The benefit of this back-and-forth is obvious in MK11. A first few hands-on matches give the impression that it could offer a significant improvement and jump beyond MK10 in both feature set and design, but when considered alongside 2017's Injustice 2, it's a more iterative change. Each change is welcome, however, and the important thing is that MK11 feels bloody good.

Devoted VG247 readers will know of my penchant for fighting games, and with that comes a particularly nerdy appreciation for animation and keyframes - and this has without a doubt always been Mortal Kombat's one major sticking point to me. If you need to know why these concepts are important, Youtuber Core A Gaming has a great explanation and SuperPunch Design Works has a brilliant take-down of MK10 in this context.

Modern MK has always had beautiful animation, including extravagant super moves and gorgeous, triple-A production value facial animation, but that's not really the problem; the issue for me has always been a priority on animation mid-match leading to characters not feeling as responsive as in other 2D-plane fighters. Part of this was to do with MK's heritage, I always figured: the original game didn't have the hand-drawn, keyframed sprite art of its peers, but rather digitized photos of actors, which to be fair was revolutionary in its own right. That gave MK a certain weight and responsiveness that was always slower, but by the time this was converted to the modern '2.5D' style of fighter in 2011, it felt to me outmoded.

So here's the good news: so far, Mortal Kombat 11 feels like the most responsive and satisfying Mortal Kombat to date. It's an improvement on Injustice 2, which itself was an improvement on MK10, and this isn't just good news for hardcore fighting game snobs like me - this is a better feeling game all around moment-to-moment. In general it feels like a smart piece of design, a nice halfway house between the characteristic, methodical pacing of MK as a series and a more immediate, twitchy feeling game. Some of the animation still feels not quite there, but this is a marked improvement.

Other changes feel similarly smart and aware of the criticisms of previous games. There's now two resource meters rather than one - one focused around attack and the other around defense, theoretically allowing for a wider range of options. A single three-level meter left MK10 too limited - nobody would ever perform the more expensive actions as the resources were better spent elsewhere - now players can better prioritize. Sharp timing is rewarded with a new 'perfect block' mechanic, while 'crushing blows' allow players to turn moves brutal by fulfilling certain requirements, that move then accented with a bad ass X-ray slow-mo moment of impact.

There's also 'Fatal Blow', a new revenge-style attack that only becomes available when your health drops very low. Fatal Blows come with the same sort of blood vessel bursting and bone shattering animation that MK has always relished in as well. Incidentally, this also feels like the bloodiest, most over-the-top entry in the series yet, relishing in the sick, sadistic pleasure of eviscerating its cast even more than before. Mileage on that one might vary depending on your constitution, but NeatherRealm clearly wants to lean in hard.

The character select menu of this non-final build suggests there'll be somewhere in the region of 25 playable characters, though just seven are confirmed as it stands. That includes one newcomer, Geras - an awesome-looking character who plays with 'the sands of time' - which means sand-based elemental moves like sandman-style decoys of himself and time-bending Prince of Persia style antics that let him teleport or rewind time mid-fatal blow to get another hit in. 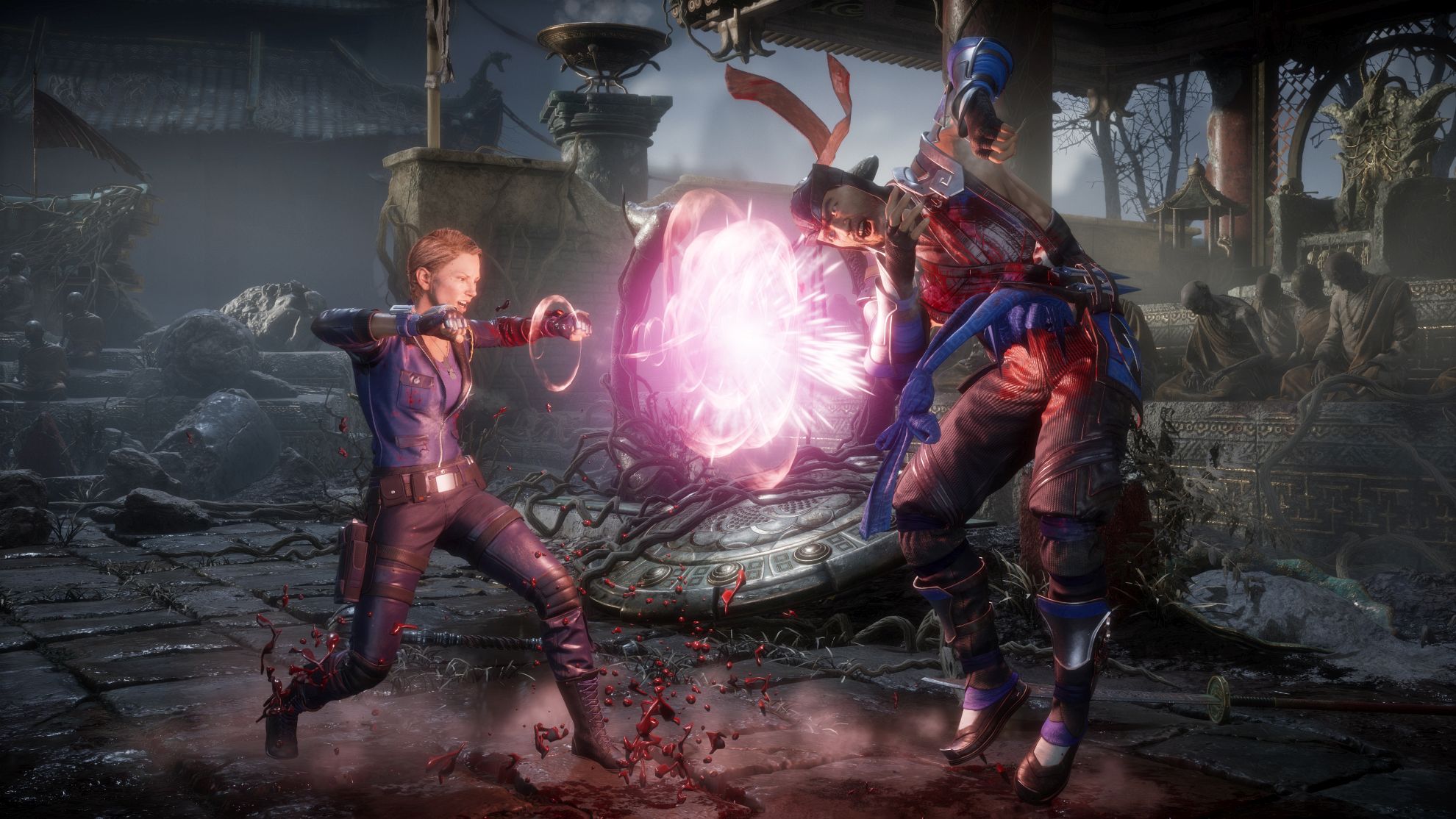 Likewise, while only three were playable today the menus on the preview build suggest 17 stages - a more than respectable launch number for a modern fighter. The character select is also somewhat deceptive, too - returning from MK10 is the class system, meaning each character actually has three styles you can select between that feature slightly different move sets and even some unique animation. All of this meshes with that gear system borrowed from Injustice - now you can customize each class with gear, too, making for an even greater level of customization complexity. Hardcore players who just want the sacred balance as handed down by the devs can, of course, play with all those RPG-style systems off.

The hands-on session I had was entirely multiplayer focused with many menu options sealed off. A little leaf through the menus confirms that this will again be a packed experience, however - a few different styles of arcade ladder, story mode, oodles of customization around everything from character gear to opponent AI and even a few mysterious greyed-out menu options that'll be revealed some other time. It's exciting stuff, and it seems that despite the expansion and extensive tweaking nothing found in the previous two content-heavy games has been sacrificed to make that possible. It's a Mortal Kombat game, and you know what that is, but it's very much looking like it'll be the best in recent memory.

It is, of course, early days. Mortal Kombat 11 isn't due until April, and in the world of fighting games a lot can change or simply come to light in that time. NeatherRealm will be crunching to get the balance right - not just between characters, but also of elements like in-game currency and grinding, which soured the early days of MK10. This is a strong initial showing for Raiden and company's latest outing, and I'm pumped to see more soon.