Metal Gear Solid 5: The Phantom Pain received a rather lovely trailer during Microsoft's Xbox One conference. VG247's Dave Cook runs his comb through it for secrets.

In true Hideo Kojima fashion, the latest Metal Gear Solid 5 trailer was awash with secret and nods to where things might be going in the latest chapter in Snake's life. While Ground Zeroes takes place in 1975, The Phantom Pain picks up again in 1984 after Big Boss awakens from his well-documented coma.

The first Metal Gear on MSX is set in 1995, so it's not a big step to say that Metal Gear 5 may be the game that finally closes the loop on the whole series. Just imagine seeing Big Boss turning from legendary solider to notorious villain and then a next-gen Solid Snake travelling to Outer Heaven to take him down.

Sorry, I just passed out there for a few seconds. Anyway, no more dicking about from me; let's go through the Metal Gear Solid 5 trailer and run-down the interesting things therein.

Oh, and if you haven't seen it yet, here it is:

0:13 Kaz swears revenge on the Patriots. 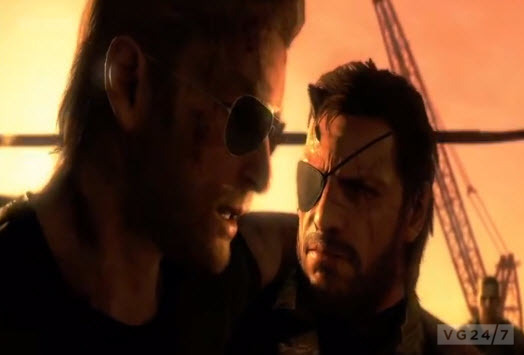 Here's Kaz Miller after being rescued from Afghanistan by Snake saying, "We pull in money, recruits, just to combat Cipher". Now, you may remember that after the events of Metal Gear Solid 3, Zero, Dr. Clark, Big Boss and Donald Anderson formed The Patriot's - AKA Cipher.

Shortly after Snake (then Big Boss) defected from the group as it started dabbling in Genome soldiers following Zero's misinterpretation of The Boss's dying will at the end of Metal Gear Solid 3. By the time Metal Gear Solid 5 rolls around, The Patriots' hold on the world is spreading, and both Snake and Kaz want to take the group down. 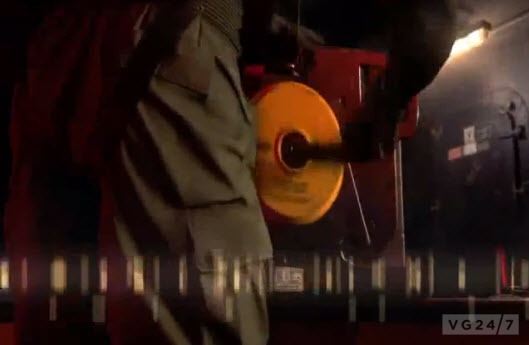 This weird lens flare effect has been seen in every Metal Gear Solid 5 trailer so far. What the effing hell are they? Knowing Kojima, they're symbolic of something. Perhaps they're symbolic of the mind control tapes being used on child soldiers in the Ground Zeroes trailer? 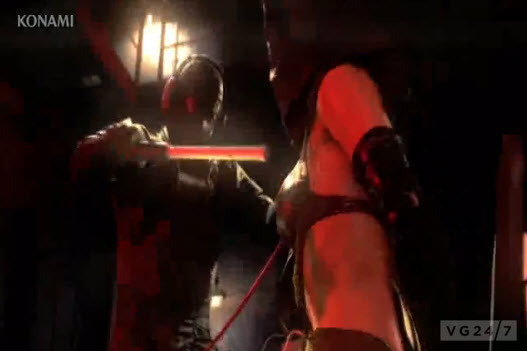 This scene shows new character Quiet being tortured with electric shocks. Note her outfit and the tears on her trousers. The whole scene smacks of when EVA is tortured in Metal Gear Solid 3 by electric shocks, causing her tights to rip apart. There's a sense of deja vu surrounding this scene.

0:55 Child soldiers in Africa, a nod to Raiden's eventual indoctrination? 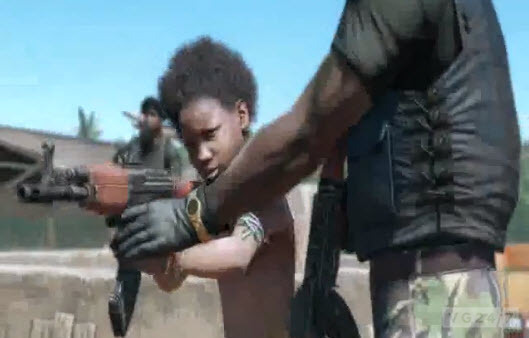 MGS 2 star Raiden was raised as a child soldier in 1989, and he fought in the Liberian War. Liberia can be found in West Africa, so it's possible that these scenes show the start of the same regime that eventually trained Raiden into a cold-blooded killing machine. Obviously Raiden is too young to appear in the game at this point, but it could be the same group involved. 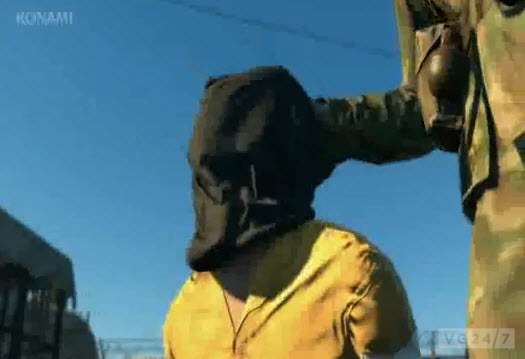 Kaz and Snake were both seen lying in hospital at the start of the Metal Gear Solid 5: The Phantom Pain trailer from GDC, so they've both suffered wounds. This monologue is Kaz talking to Snake about the phantom pain effect of their missing body parts. 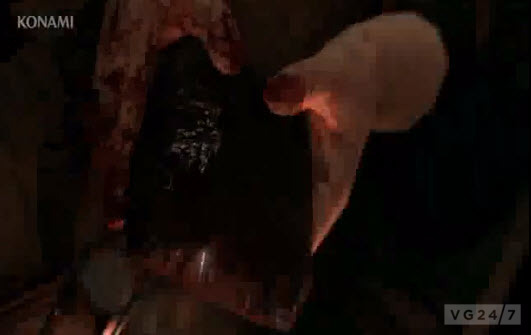 Here's Snake and his mates pulling a device out of a young girl - confirmed to be Paz's - chest. Her head has been shaved and you can see Chico standing by the table, helping to hold her organs in as Snake and his team pull the object from her chest.

It has a peace symbol on it, and appears to be the same thing Chico was plugging headphones into during the Ground Zeroes trailer. Why were Paz and Chico being indoctrinated? 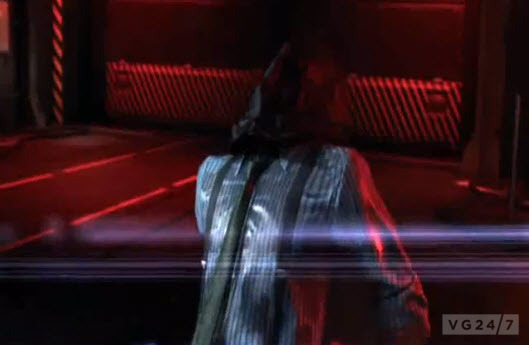 Here's Ocelot torturing Emmerich for some reason. Note that he has the same robotic legs that he has at the end of the trailer. The question is, why is he being interrogated in the first place. 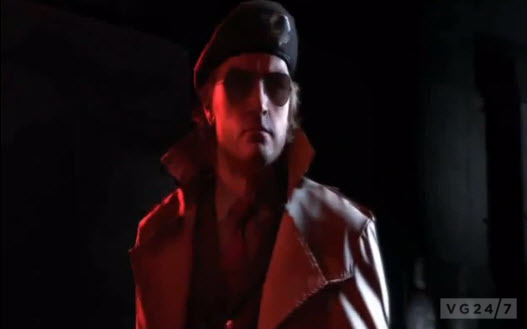 There's a less-haggered-looking Kaz wearing a Diamond Dogs beret. He's clearly out for revenge after his imprisonment in Afghanistan, and doesn't seem to be taking any prisoners. This is not a young Roy Campbell, as Kojima himself has since debunked this theory.

3:03 The birth of Diamond Dogs and Outer Heaven 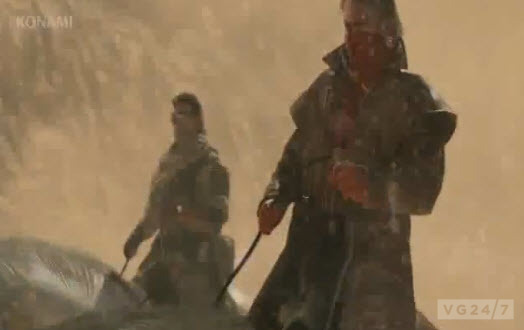 Ocelot tells Snake that it's not just 'them' who want the legendary soldier dead. 'Them' is likely in reference to the Patriots / Cipher. He also tells Snake that he'll have to team with with Kaz and form his personal army of mercenaries again, except this time it'll be called Diamond Dogs instead of Militaires Sans Frontières. Either way the seeds of the Outer Heaven uprising are being sown right here. 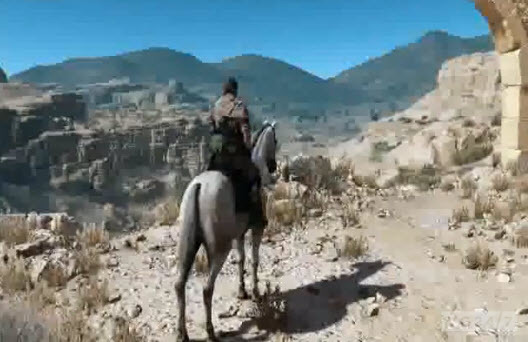 Sorry, I just wanted to express how lovely this is. 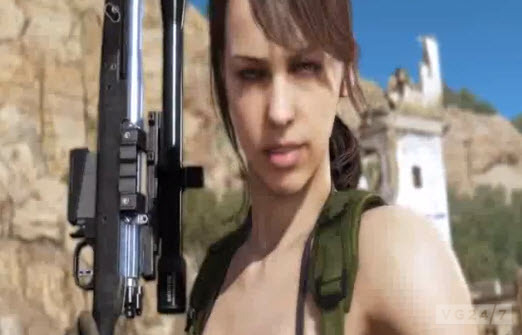 I skipped a ton of gameplay as no doubt you've seen it already and it doesn't hold any real secrets. Anyway here's Quiet a sniper who may well be the woman getting tortured earlier in the trailer. Either way she's a new character and it's not yet clear if she's friend or foe. 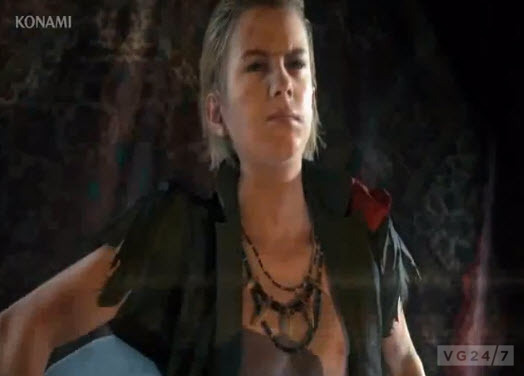 Eli's a child who has lost his future, suggesting he is another child soldier. The internet is currently speculating that this is actually a young Liquid Snake, so the red motifs on both Ocelot and Eli could signify their future bond throughout the series, plus there's a snake on his lap. 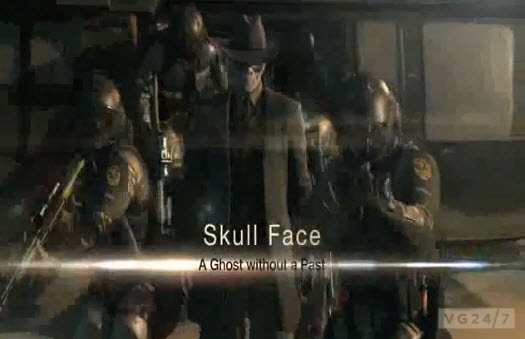 This guy remains a mystery, although given his disfigurement he may be the guy with the bandaged head in the first Phantom Pain trailer. The timelines don't stack up though as he was disfigured in the Ground Zeroes clip, which is set before the hospital break-out in The Phantom Pain. Either way this guy is leading the XOF force and seems to have it in for Snake. 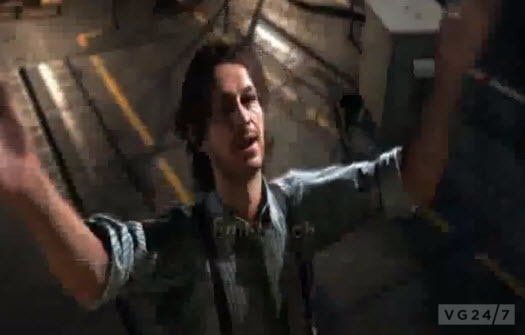 Note the robot legs and cheers of happiness. Well played man, well played. I also have no idea who the following guy, Code Talker is, but it has been suggested that research into Emmerich's robo-legs also gives birth to the bipedal nature of the Metal Gear walker seen at the end of the trailer. Could he give birth to the Metal Gear menace that dogs the series? 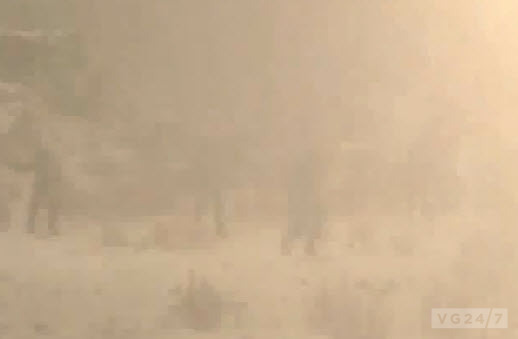 Look closely, these people literally jump into the air and fly off here. You seen them landing a few seconds later and they appear to be jumpsuit troopers. Who could they be? XOF forces? 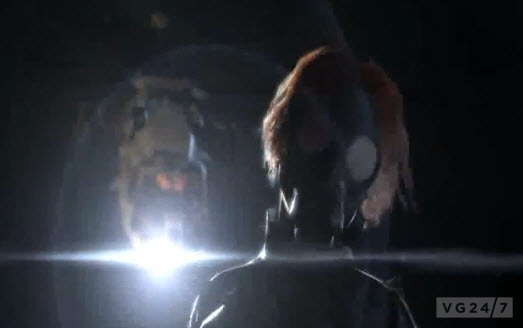 Mantis is a really popular character. Maybe we can see the mind-melding freak's origin story play out in Metal Gear Solid 5?

07:45 Is Snake killing Chico from the Ground Zeroes trailer? 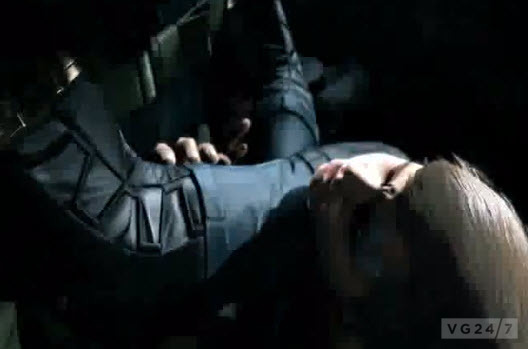 Maybe Snake isn't rescuing Chico for selfless reasons at all? Maybe he has sensitive information inside that thing in his chest that Snake needs? Perhaps he's just knocking him out to make their escape easier?

In the Ground Zeroes trailer Skull Face asks Chico how it feels to play traitor, so it is possible that Snake is trying to kill him as some kind of payback, but that wouldn't fit with him standing next to Paz as she undergoes surgery. While Kojima did say that the game crosses many taboos, in the world of gaming kid-killing is a big no-no. 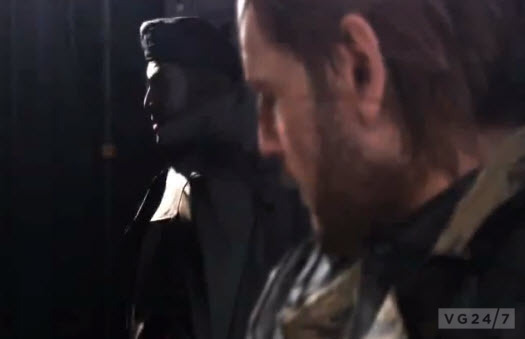 There's Snake and Kaz working together under the Diamond Dogs banner. Could we see the group forming the new Outer Heaven in Metal Gear Solid 5? Getting excited yet? We then see the fall of Peace Walker's Outer Heaven, a bunch of caged children showing diamonds to Snake and more. 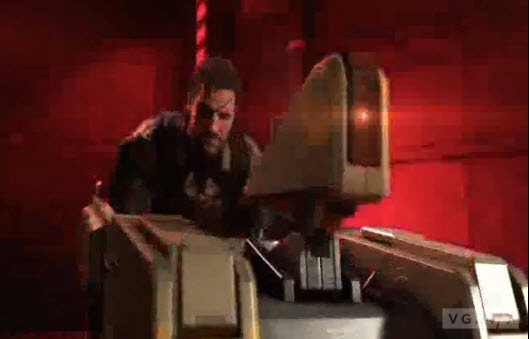 If you know your Metal Gear timeline then this last shot should get you very excited indeed. Kaz states that Cipher is working on new Metal Gear research in Africa, and that it's the 'missing piece'. The original Metal Gear game on MSX is set in the new Outer Heaven, which is located in Galzburg, South Africa.

It's there in 1995 that Big Boss goes rogue, steals Metal Gear and stages an uprising, prompting FOXHOUND to send in his son Solid Snake to find and kill him. This could be the point that the series loop closes and the full story of Metal Gear Solid becomes complete.

Now, how exciting is that prospect?