The latest story trailer for Gears 5 will get you better acquainted with protagonist Kait Diaz.

Gears 5 tells the story of Diaz, an Outsider who descends from Locusts and whose past is left to be uncovered by the player.

But in between all of this, the darkly thumping Nine Inch Nails soundtrack and quick cuts depicting our Kait haunted by visions of blood and trapped by machinery, is one full bewildering second of extreme windsurfing gameplay. In the trailer below you can see Kait pilot the thing near molten rock and across ice lakes. That baby can go anywhere!

Game developer The Coalition have yet to formally announce its insane alien windsurfing vehicle thing, but the visual tease suggests you'll be able to traverse long distances by harnessing the wind. 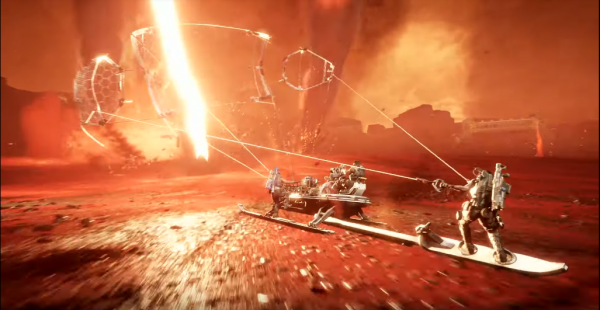 Gamescom 2019 has kicked off with quite a few Gears-heavy announcements. During today's Inside Xbox, Microsoft announced an upcoming parternship between Gears of War and collectibles manufacturer Funko Pop - a free mobile game called Gears Pop. We also got a look at Gears 5's Horde Mode gameplay. Gears 5 launches September 6th on Game Pass Ultimate.