"Hope County is the kind of place in which the daylight pastimes of hunting, fishing and drinking morph into night time habits of fighting, killing and fucking."

More than any other game in the series thus far, Far Cry 5 feels as though it’s being built around real-world events and fears. The game is introduced to me within the context of Brexit, the rise of the alt-right, the increasing popularity of private militias and the general growth of populism as a means of securing power seen across many parts of the Western world.

One of the tone-setting images flashed up on the projector during a short presentation of Far Cry 5’s planned direction depicts a well-dressed man standing on a cliff edge. The message is clear: is civilised society at the precipice?

Modern day USA is the setting here, specifically the fictionalised Hope County, Montana. Dense forests, clear lakes and rolling meadows flank the town itself, which is made up of churches, water towers, strip clubs, bars and a dusting of spacious farms. On the one hand it looks like the kind of place you’d film a Black Beauty reboot, on the other it comes across as the epicentre of global serial killer production. 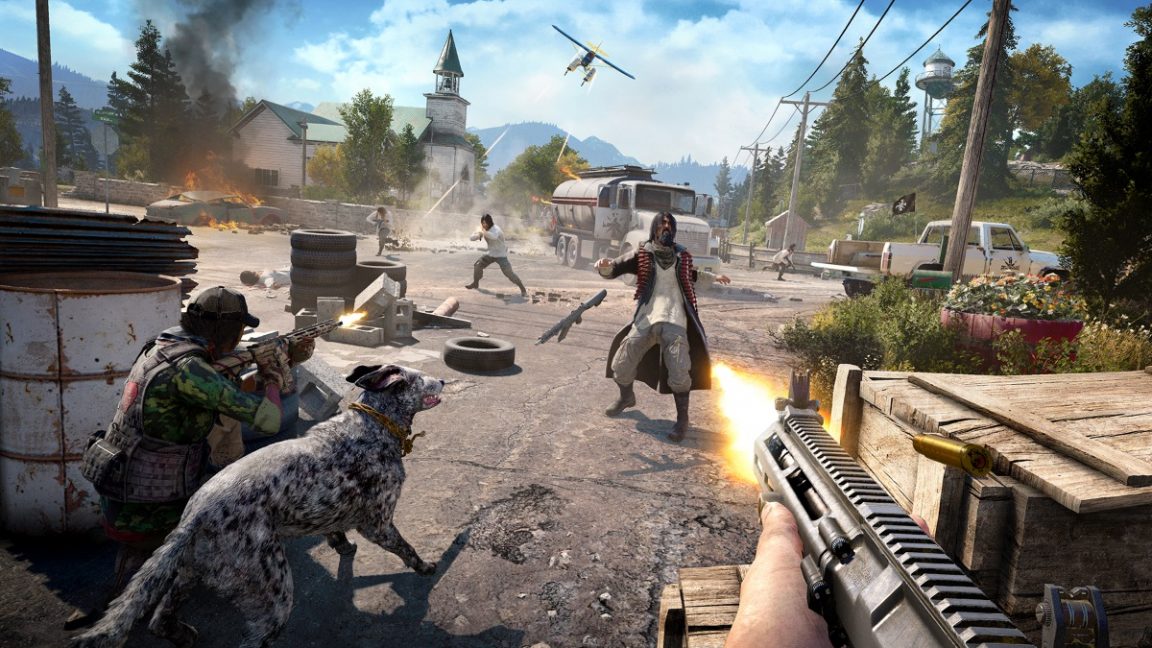 Montana, for reference, and surely to the delight of Ubisoft’s marketing team, is the home of Republican congressional candidate Greg Gianforte. Mr Gianforte has very recently been charged with assault in relation to a scuffle he had with a Guardian journalist following questions he didn’t like. Right-wing man beats up left-wing writer he objects to. It’s the perfect distillation of what Far Cry 5’s setting and cast represent.

Hope County itself is becoming increasingly controlled by a cult-like organisation known as the Project at Eden’s Gate, a group seemingly prepared to do whatever it takes to make sure their power over the area is absolute and it has little time or respect for dissenters. They’re led by Joseph, the oldest of four siblings who collectively refer to themselves as the Seed Family.

"For the first time in a Far Cry game you can opt to create your own character and dictate your own story through the world."

Joseph calls himself the ‘father’ of the group, despite not being the eldest. There's a younger brother and half sister and they collectively call themselves The Heralds.

You play a local deputy charged with arresting Joseph, but other than that you’re free to design your own path. For the first time in a Far Cry game you can opt to create your own character and dictate your own story through the world. I can’t go into more detail on this as there isn’t more detail to give at this point. Ubisoft is being careful to stick to a piecemeal release of any information relating to core design concepts.

What is confirmed is that Joseph allows himself to be arrested, but his followers are less patient and decide to attack you and your two accompanying officers. You’re kidnapped and beaten up and from there, presumably, your quest to take Joseph down truly begins.

The entire campaign can be played in co-op, although it’s not clear how this will impact the narrative and how it’s presented. It could be that the 'host' player is the one who drives the plot and determines the direction in this regard, or it could be that some way of including both parties in decisions is formed. Again, piecemeal Ubisoft.

Whatever the case, much of the core conflict determining the moment-to-moment tension revolves the inhabitants of Hope County themselves and their feelings regarding Eden’s Gate. Some of the town are pro Joseph and his faux-religious enterprise and others are less impressed.

A number of non-playable characters critical to the narrative have been revealed, each one of which stands in opposition to Eden’s Gate. The suggestion, then, is that you can’t bring it upon yourself to decide that you actually like and agree with Joseph and his ideas and act in a manner that supports him. He is the bad one and you are the good one, it seems.

Pastor Jerome is one of three non-playable characters to be detailed and he’s the most Tarantino-esque of the trio. Determining that he can’t rely on his teachings and faith to win the hearts and minds of Eden’s Gate converts, he has replaced his bible with a Glock and his cross with a couple of shotguns. His outlook on the situation: if being a shepherd doesn’t work then be the wolf. 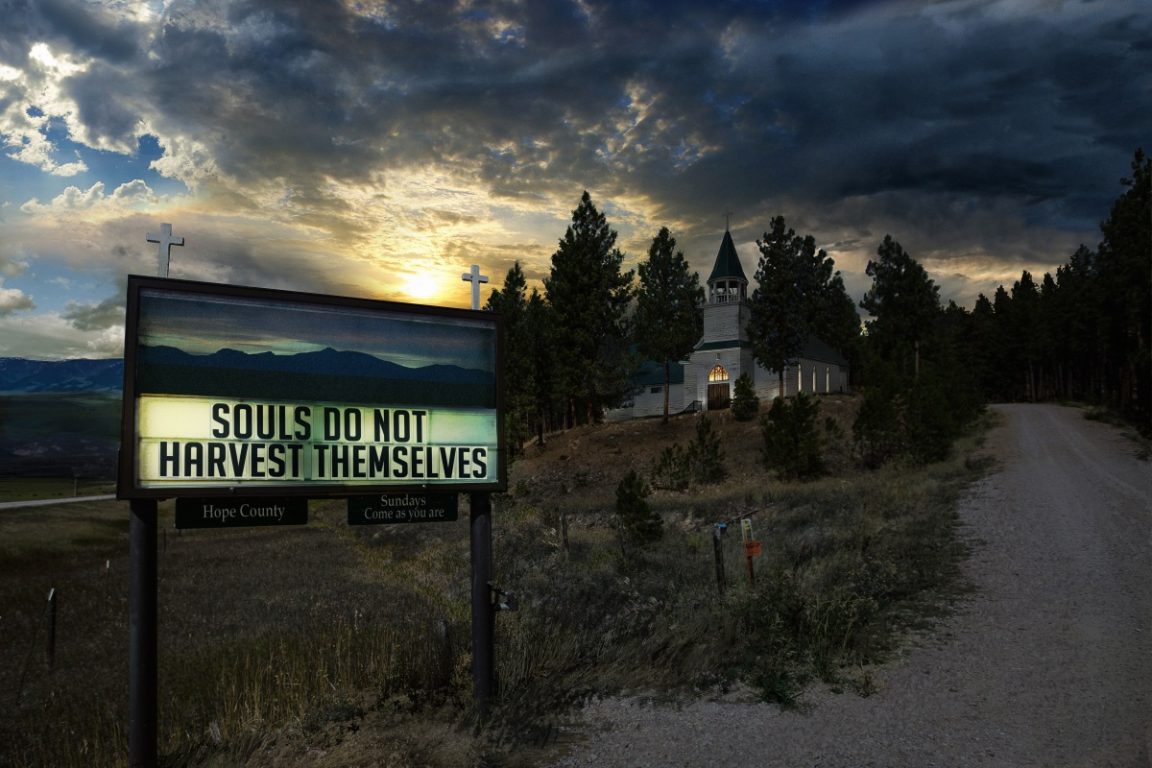 "If its gameplay and interactions are as bold and progressive as its attempt at political and social critique then this has every chance to push the series back to the top of the open-world pyramid."

Mary May runs a Hope Country saloon, the Whistling Beaver. She doesn’t want to see Joseph and his crew take her business from her and is prepared to transform her stock of liquor into Molotov cocktails to get her point across.

Then there’s Nick Rye, lover of planes, family and military. He’s expecting a child soon, hopes it’s a boy, and wants to one day be able to achieve something similar to what his father and grandfather did during their time in the air force. Loading a minigun to his plane and shooting lead into Eden’s Gate is one way he might be able to do so.

Planes, for reference, are one of the vehicle types you can use in the final game. There will be others, for certain, but details are absent right now.

Far Cry 5’s attempts to engage with our current political climate makes it interesting on a level very different to what we usually expect from this series and, frankly, from a publisher as large and as bureaucratic as Ubisoft.

If its gameplay systems and available interactions are as bold and progressive as its attempt at political and social critique then this has every chance to push the series back to the top of the open-world pyramid.