A fan-favourite rifle from Destiny is just as strong in the sequel, but you'll need to obtain it all over again to use it.

The Destiny 2 Mida Multi-Tool is very similar to the Destiny 1 iteration in all of the ways that made players like it so much originally. Back in the first Destiny the rifle was a random drop or could be nabbed from a vendor, but Destiny 2 has dropped this particularly beloved weapon behind a quest instead. They know people love this gun and they want to make you work for it, which is fair enough, I guess.

The Mida Multi-Tool is a great little exotic Scout Rifle with some very useful perks including a boost to your movement speed. It also keeps your radar visible at all times, even when you're aiming down the weapon's sights. This makes it much easier to keep track of what your foes are up to around you. While it doesn't sound like that big of a deal when written down like that, it's actually more meaningful than you might think, and it can really save your bacon. It's a good, useful gun to have in your arsenal.

If you want to know about more of the powerful exotic weapons in Destiny 2, be sure to hit up our Destiny 2 Exotics page. In there you'll find a list of every exotic weapon in Destiny 2 plus instructions on how to unlock them. We're good like that.

Like most of the Destiny 2 World Quests, the quest for the Mida Multi-Tool is one that scales and can be done at whatever character level you like. If you're trying to boost yourself and quickly level up your Destiny 2 character to the level cap this is a great quest for that purpose. 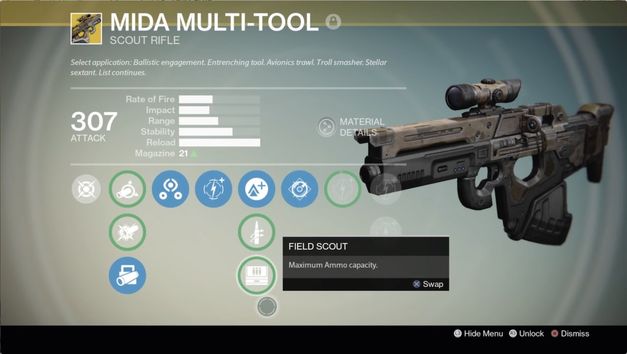 How to get the Mida Multi-Tool in Destiny 2

This quest is ultimately similar to the quest to get the awesome side arms Sturm and Drang - you have to complete a series of missions and fulfill a number of objectives. This quest unfolds over the course of a number of steps, and waiting for you at the end will be the Mida Multi-Tool.

Step one - Enhance: getting the Mida Mini-Tool

In order to get the Mida Multi-Tool, you'll first want to grab its little brother.

Once you've got your hands on the Mida Mini-Tool you're well on your way, but your next step is to show off that you know how to use a scout rifle...

These multiple kill objectives don't have to be focused on right away. You can complete them while tackling other quests, so do that if you want - or grind it out, the choice is yours. Once you're done, return to Banshee-44 in the Tower.

Step three - Under the Hood: getting Scout Rifle parts

Step three is given to you by Banshee-44 right away, and he rewards you by offering up the Under the Hood quest, the next step in the Mida Multi-Tool saga. This quest is pretty simple, and basically requires a gear sacrifice to the gear gods: you'll need to dismantle a bunch of weapons.

You'll have to dismantle five rare (blue) or legendary (purple) Scout Rifles. You should've seen a lot drop over your time, and you should be able to grind out some more if you can. If you've been fastidious you'll probably have a bunch of them in your vault, though they may not be ones you want to get rid of. Choose carefully, of course.

Once you've done this, head back to chat to Banshee-44 again. He's got one more quest for you.

Step four - The Fall Will Kill You: SMG mastery and the Mida Multi-Tool

The final quest Banshee-44 will give you in order to get your hands on the Mida Multi-Tool exotic scout rifle is called The Fall Will Kill You, and the quest objective here is appropriate for the name.

The objective is similar to the first - you'll have to rack up a number of kills in a specific way, with this way being one that'll make you look particularly bad-ass. This time, your objective is to get 50 airborne SMG kills. This means exactly what you'd imagine: you need to be in the air when you down enemies.

As with Sight, Shoot Repeat and the Sturm and Drang quest objectives you can do this as an aside during other missions or you can grind it out as quickly as you can - the choice is yours. When done, return to Banshee-44 and have one last chat about the Mida Multi-Tool. It'll finally be handed over - it's yours!