During the Death Stranding TGS stream we got a look at almost an hour of gameplay, which showed off motorbike action, a bit of stealth, a boss fight, Monster Energy drinks, and a look at that Strand System. 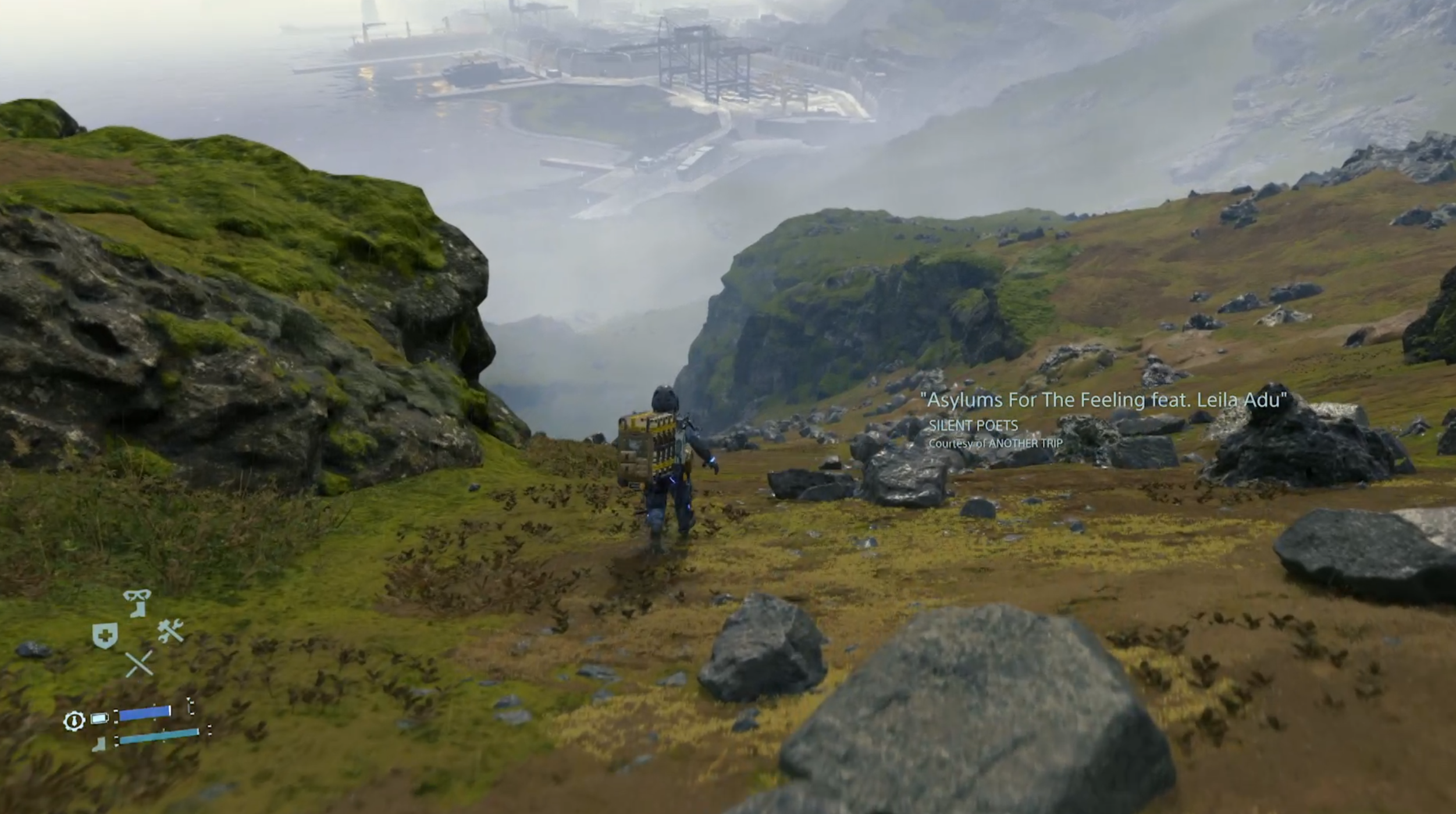 Kojima has always said this is a game about ‘ropes’ - it’s about pulling players together and making them cooperate to achieve their goal. The objective of Death Stranding is to travel from the east coast to the west coast in the US, connecting settlements to a power grid and delivering cargo.

While you travel, you will come across remnants of other players. Previous trailers have shown the protagonist, Sam Porter Bridges (Norman Reedus), placing down climbing anchors and ladders to traverse chasms in this craggy open world. If you leave these pieces of equipment behind, they might pop up in other online sessions.

Players can also retrieve the dropped cargo of other players, or leave messages and mark routes to points of interest. In one scene, Sam rests under a musical shelter that another player erected in the wilderness. In another, there’s a rideable motorcycle left by another player that Sam is able to ride before leaving it for someone else to stumble across. Later still, Sam bathes in a hot spring marked by a nice pal, chills out, and sings to BB, his jar baby.

When Sam finds himself facing off against the BTs - those spectral figures from the early trailers that leave oily handprints in their wake - he gets a helping hand as well. After tying a couple of them up with a bola gun, Sam is captured and dragged off to what’s essentially a boss fight with a big petrol dog, set within a ruined city sinking into the oily mire. You have to stay afloat by climbing across the rooftops of sinking cars and submerged buildings.

You can call out for help at any time, which marks nearby multiplayer resources. In this boss battle, this calls forth a pale outline of another player who’s then able to hurl you useful items such as a blood bag and grenades.

All of this is so you can farm a kind of currency - the only currency that really matters in 2019: social media likes. Every player action can be liked, though presumably the likes in Death Stranding have some actual value attached to them. 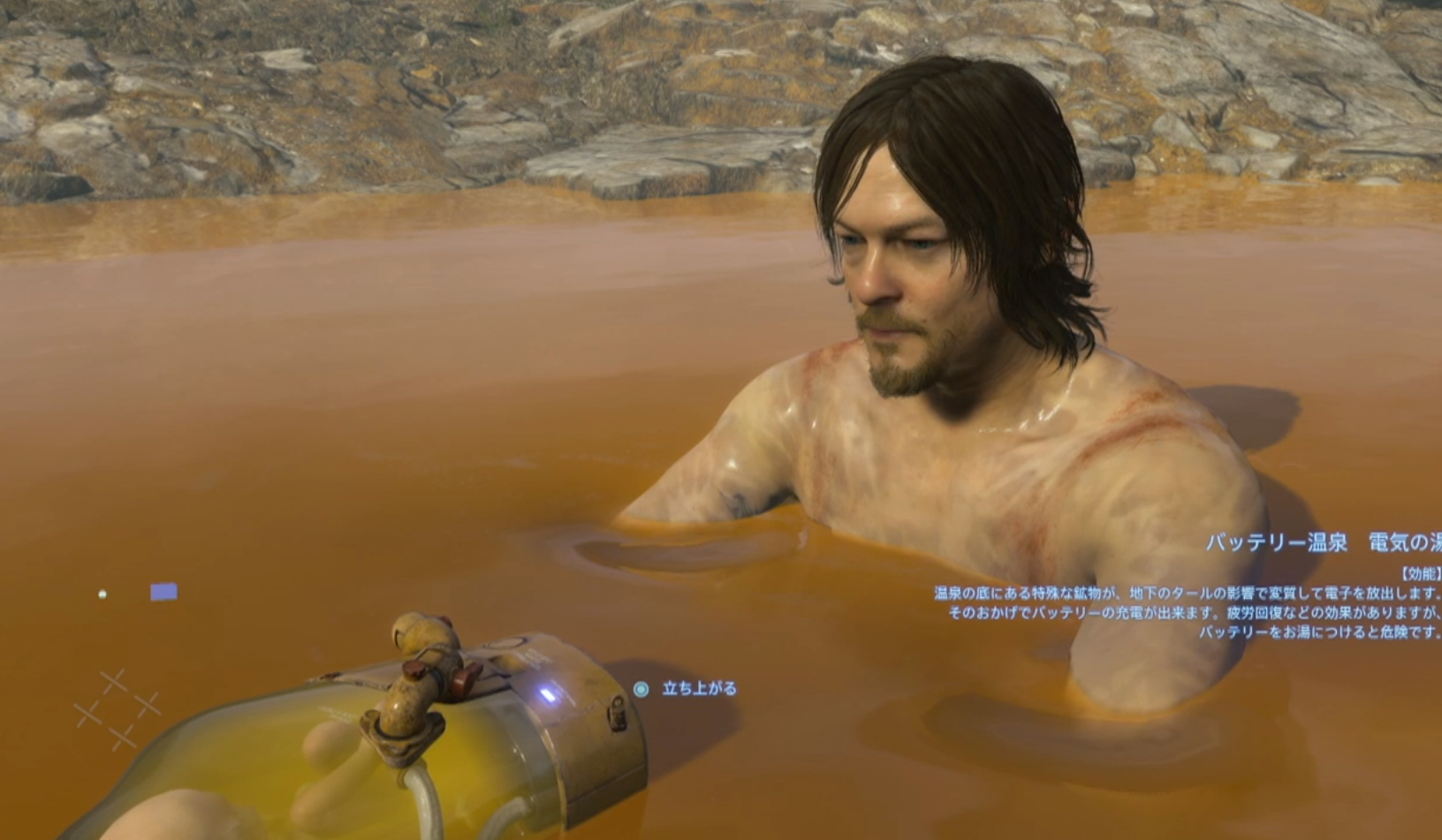 You can carry too many pieces of cargo in Death Stranding. Poor Norman Reedus acts like a pack mule as you stack him up with boxes and containers on his back, dangling boots and even more boxes by his side. This slows you down and saps more stamina, but you’ll get a bigger payoff for completing a mission while stacked up. While there is traditional combat and stealth in Death Stranding, it looks like the real obstacle is the environment itself. At the start of the gameplay footage, Sam takes a good few minutes to cross a small river. 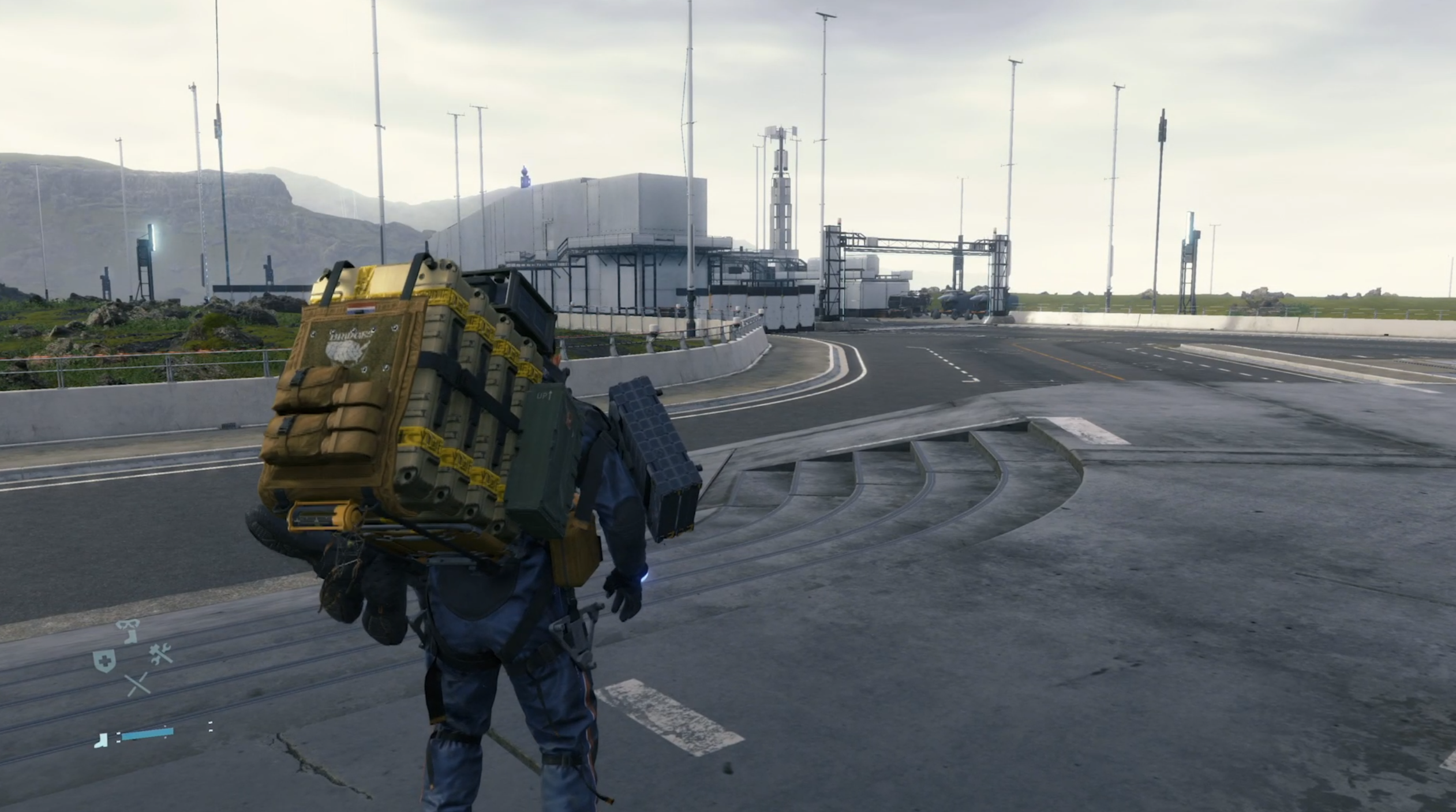 He finds himself in deep water and has to paddle as the current takes him and his backpack weighs him down. You can lose some of your supplies this way if you’re not careful. Sam is also forced to rest when he gets across, since the struggle in the water saps his energy levels. Luckily, there’s product placement in the form of Monster Energy drinks. The feature we always wanted.

Your boots can degrade through water damage or simply by wearing them out through your travels, so you have to pack spares. As you walk, if you’ve stacked Sam up with cargo, you have to shift your weight around to prevent Sam toppling over. BB can panic when you mess up, so you have to manage the baby’s state of mind along with stamina, health, boots, and your bladder. Yes, you can piss in the wild. Yes, there’s a toilet at the settlements that lets you choose between number one or number two. 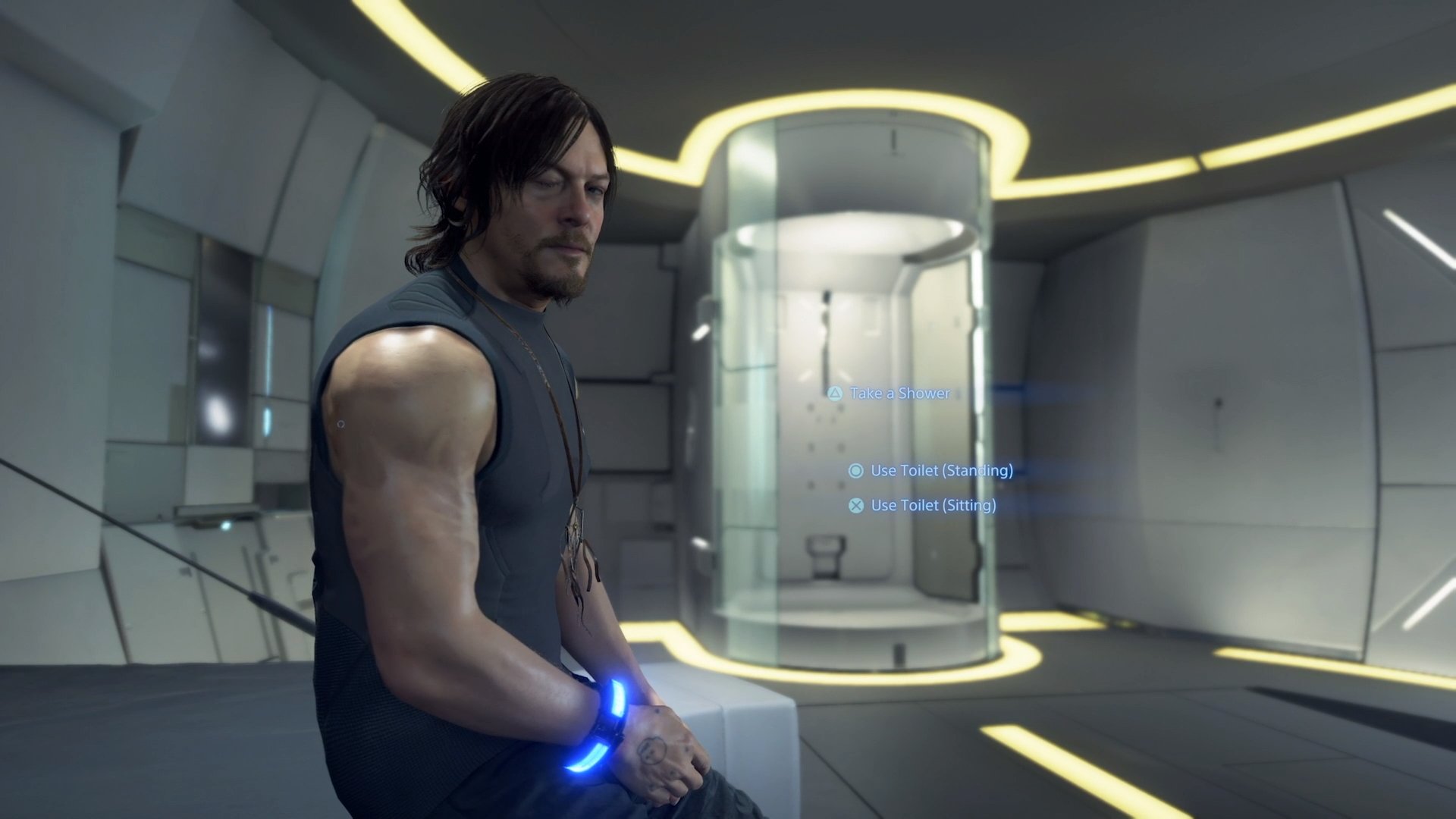 If you need to take a minute, you can also rest on the floor anywhere, giving you the option to massage your shoulders, stretch your legs, sooth BB, and sleep. There’s a harmonica you can pull out for BB, which is possibly the best thing in anything ever. 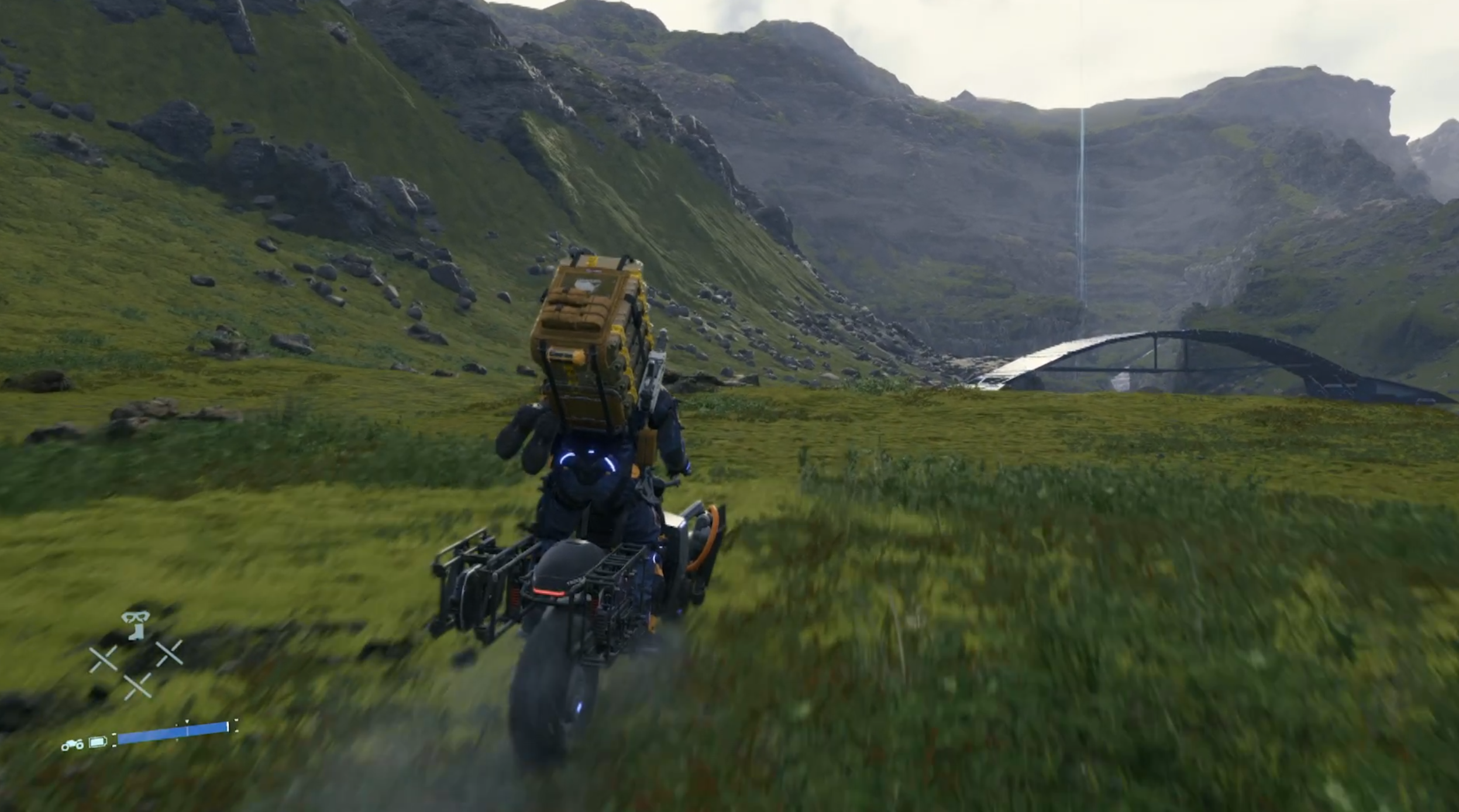 You won’t just be walking around a beautiful, vast landscape, though. We’ve finally had a quick look at combat, which boasts a range of non-lethal options like most Kojima games. There’s a fiber wire-style gadget called a strand that you can use to strangle people, though it’s called ‘binding with strand’, so presumably it’s not actually murder. You can use that bola gun I mentioned earlier to tie them up, too.

There’s hand to hand combat for knocking punks out if you want to get down and dirty. For a bit more heft, your cargo can be used to clobber folks, and you can also use them as projectiles, launching them at hazmat suit goons’ heads.

In one scene, Sam uses a speedy exoskeleton to run alongside a vehicle before pulling the driver out and taking control of the thing. It’s soon taken down by electrical spears and he’s out on his boots again. He tries to escape but comes to a large chasm, takes a run up and uses the exoskeleton to launch himself across like Neo hopping a rooftop in The Matrix.

We got a glimpse of a power exoskeleton as well, which is presumably good for carrying stuff and hitting people in the face. Elsewhere, there’s a robotic trolley that you can pull around on a cable with your cargo onboard. If you take your cargo off, you can use it as a powered skateboard.

All these vehicles and exoskeletons are battery powered - Death Stranding’s beached whales and oil imagery already seem like they’re attempting to evoke climate change, so it’s no surprise - which means they can power down. Other players can leave charging stations for you to use to power them back up again. If you use vehicles and exoskeletons within the power grid you’ve created on your travels, you don’t sap their battery within these bounds.