Ever since Call of Duty 3 broke cover, Treyarch has been viewed by many CoD loyalists to be the underdog, the weakest link in the chain, or as a shadow of Infinity Ward and its Modern Warfare trilogy.

But then came Call of Duty: Black Ops.

Say what you will about this tale of mind-frazzled shadow operatives, Vietnam atrocities and its unhealthy obsession with numbers - It was the multiplayer that marked Treyarch's step up to the forefront of the Call of Duty series.

Strip Black Ops down to its core and at its heart was a multiplayer shooter with solid balancing, a playful nature, solid map design and a toolkit for creating utter carnage on the field. It felt like the Treyarch team was simply having a laugh with the series, and it rubbed off well.

But how does a team with new found stability and confidence under its feet improve on such a significant increase in quality? Well, the future of course, because as Treyarch game design director David Vonderhaar explains to us, the future setting gave his team a greater sandbox to play with.

More toys means more fun, and that's what Black Ops 2 is all about. It's a toybox rammed full of 100 individual unlocks covering guns, attachments, perks, gadgets, and more. With so many variables to play with, balancing should be a concern. 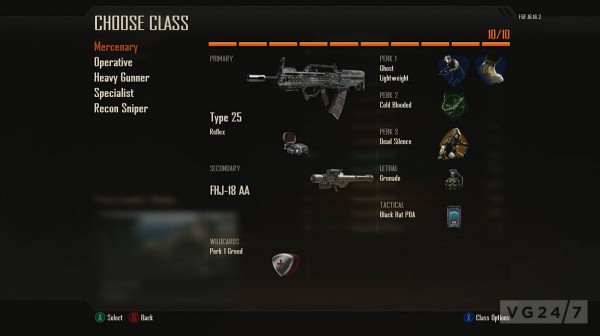 But Treyarch has that covered too in Black Ops 2's all-new create-a-class mode, dubbed internally at the studio as 'Pick 10'. It's called that because when you start making a class you have ten points to play with. Each of the 100 items in the game costs a single point. How you spend them is entirely up to you.

You can skip your primary weapon and spend more points on perks if you like, or even cash in an attachment you never really use for an additional perk. It's an ingenious system that gives rise to an endless string of entirely customised classes. This freedom gives everyone a chance to experiment and tip the scales in their favour.

Surely now claims of cheap deaths and being cheated by the game are over. Well who are we kidding? They never will be, but it's a start.

You get a new unlock point each time you level up, and then you can choose one new piece of kit from an assortment of seven. With a level cap of 50, it doesn't take a maths whizz to figure out that you won't be able to unlock all 100 pieces of kit in one playthrough - That's why there are also ten Prestige levels. 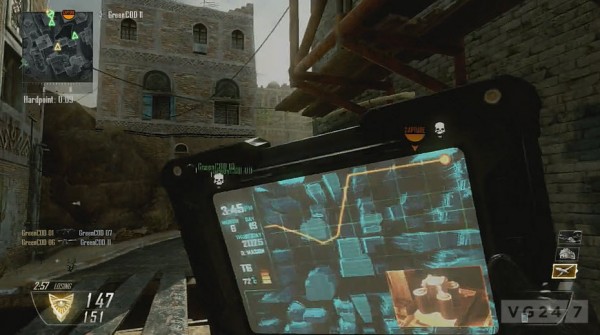 So what new toys will you be able to play with in Black Ops 2 multiplayer? Weapon classes stay the same, but there are more variables this time. Take the AN-94 assault rifle for example. The first two rounds of any burst fire will deal extra damage, so you have to try and land on target initially.

Elsewhere, you can spend a create-a-class point on a fire mode switch for your gun, meaning you can trade the rapid fire of full auto for the control of single shot or burst. You then have the biggest range of scopes to date including the Target Finder, which paints a red square around enemies through smoke and walls when nearby.

Even if you're still not entirely happy with the choices given to you, there are also new Wildcards. These are create-a-class modifiers that also cost a point. With these you can select two primary weapons, pick an additional perk from any of the three tiers, or get extra grenades.

Gunplay at control level feels like classic Call of Duty, but without the annoying over abundance of air support, or a sense that sometimes you are being cheated. Players move slightly slower too and climb the environment with additional weight. This is no speed run - it's a careful and meticulously planned shooter experience. 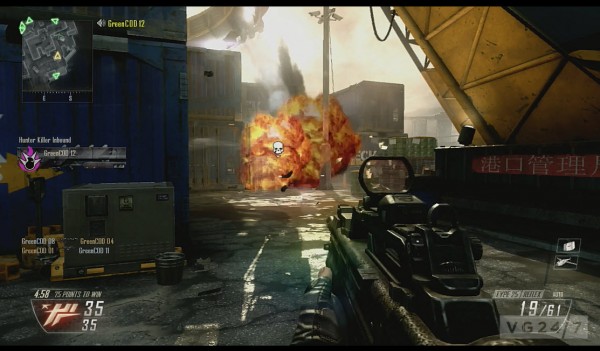 This is also apparent in Black Ops 2's map design which, like its predecessor, boasts some truly superb environments to do battle in. Out of the four maps we've played, Cargo is the pick of the bunch. It's a Singapore dockyard map littered with freight containers.

The map is always shifting thanks to a robotic crane in the middle that keeps on picking up and moving the containers throughout the map. The layout changes, and so must your tactical approach. It's genius.

Turbine is also fun, taking place in and around rocky Yemen valley. You battle through the canyon and around pieces of broken plane fuselage, sprinting up the snapped wings to reach higher levels. But unlike previous CoD games, almost every ledge can be scaled. This gives maps more verticality, and opens up potential for hidden routes.

Aftermath is similar in this regard, set in downtown Los Angeles after a drone attack, you must navigate toppled skyscrapers and granite chunks to outflank your enemies. It's deceptively larger than its top-down map would suggest.

Finally, Yemen is a town map, strewn with back alleys, tunnels, walkways and buildings to battle in. THis one feels like Favela from Modern Warfare 2, but with reduced camping potential thanks to Treyarch's impeccable eye for map design, and tons of choke points that let your new Score Streak rewards shine. 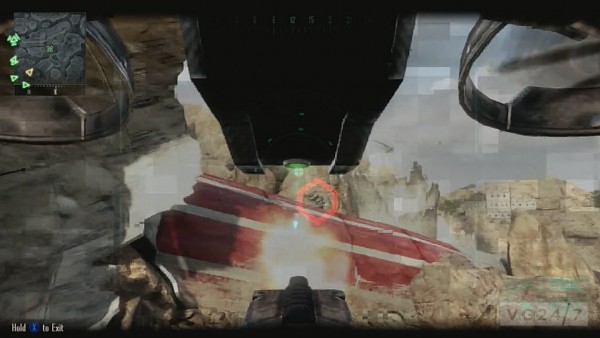 Ah yes, Score Streaks. Say goodbye to the days of Killstreak rewards, because they don't exist in Black Ops 2. You must also spend points buying Score Streak rewards in create-a-class, or you can choose to ditch them altogether. We wouldn't though, as they're tons of fun.

Once filled, you can unleash hell with a range of new rewards. The Guardian - first seen in the Black Ops 2 multiplayer reveal trailer - sends out a blast of microwave energy that really stings and can kill you in seconds if you linger in its radius too long. The Dragonfire quadrotor drones are a real highlight too.

The Hunter Killer drone is fun. It's a small, explosive glider that you launch from a wrist device. It then circles overhead before dive bombing straight into an enemy like an AI-controlled Predator missile.

Hellstorm Missiles are also like Predator missiles, but you can choose to detonate them in mid air so it spreads smaller bombs across the map instead of one focused blast, while the A.G.R. robotic tank is a high tier Score Streak reward. It can either be left to fend for itself, or you can pilot it at any time with your PDA. 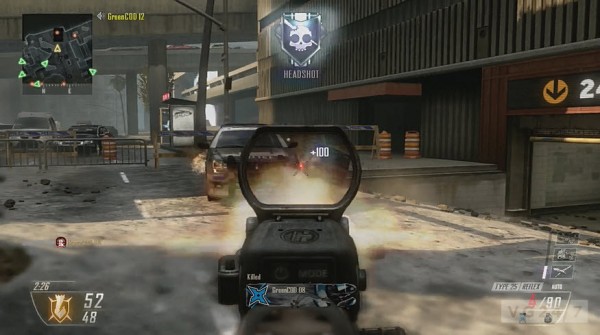 As if all of that wasn't enough there are even new game modes in the mix, including HardPoint, which sees players fighting for control over randomly shifting zones on the map. To score, all you have to do is have the majority of players in the zone to gain a stream of points.

You can even have a massive battles another new mode called Multi-Team, which sees up to six of Black Ops 2's new factions fighting each other at the same time. Said factions are Seals, SDC, FBI, Mercs, ISA and Militia, and these battles really are crazy.

We could go on, but there is just so much new content in Black Ops 2 multiplayer to discuss. So that's why you should check out our Black Ops 2 gameplay footage video gallery, to see everything in action for yourself.

But before you do, know this - It's clear that more content doesn't necessarily mean better quality, but in this case it gives players freedom to tailor the game in more ways than ever before, giving rise to those crazy moments of sheer chaos that Call of Duty delivers on so well.

Plus you know, there's no quick-scoping either, which is always nice.