Console development is often lambasted by those who champion new ideas. 'Innovation on consoles' is dead they say, as they scoff at the latest Resident Evil 6 and Halo 4 reviews. Those numbers are getting pretty high aren't they?

Call of Duty: Black Ops is the 9th core entry to Activision's juggernaut franchise. Now that's a high number indeed. You're right though, you've always been right: it looks just like every other game in the series. What has console gaming become if not a grease-stained production line manned by staff too afraid to dream a little bigger?

Compare it to the indie and PC market with its new IP and bright ideas. It's an unspoiled paradise of innovation and imagination. If only the console market could get to that magical promised land. Unfortunately it's become too big to fit through the gate.

“Black Ops 2 is confidently the biggest attempt to change the multiplayer template since the original Modern Warfare. But these changes don't necessarily make it better as a whole.”

Console developers often peer through the shiny gold bars of this lush heaven, staring on in envy as Gabe Newell lounges by the pool feeding grapes to Notch. Somewhere within the utopia, Team Meat are riding their unicorns through a forest made of entirely dreams.

Luminaries like Jonathan Blow walk a hedge maze lined with paper money. They don't need it after all, they're not in this industry to win it. It's an market founded on free ideas, not a yearly shooter series that doesn't change much with each instalment. This is what gaming should be about shouldn't it?

Well no, that's not how the world works actually. Granted, few publishers know about the cyclical release ethos better than Activision, a powerhouse of long-standing, corrosive franchises such as Guitar Hero and Tony Hawk.

But Call of Duty – for everyone’s bitching and moaning about it – has yet to see that same decline. Its DNA is so ingrained into the popular subconscious, its long-standing mechanics and traits burned into the minds of its fans for Activision to ever allow significant slack on the leash.

But why should they? The series has never been healthier in terms of raw sales, and regardless of complaints focused on how similar it looks on the screen to its predecessors, Black Ops 2 is confidently the biggest attempt to change the multiplayer template since the original Modern Warfare. But these changes don't necessarily make it better as a whole. 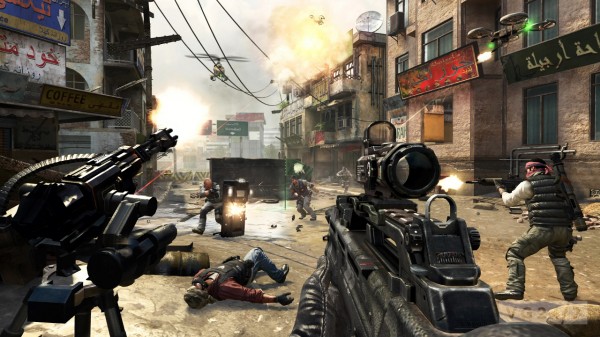 You do have to sit down and play it to get past the visuals however, and only then will you begin to appreciate Treyarch's effort. I've often said on these pages that new IP is a wonderful thing, and even I can admit that Black Ops 2's multiplayer is not perfect. But to change it too much would be suicidal, that much is clear.

The Call of Duty series sells so well because it's superb at what it does, not because we're all closed-minded gamers with no desire to explore new avenues. It's an effective showcase of twitch gunplay and deafening spectacle. If you're not a fan of it, then that's perfectly fine.

That core gameplay remains in Black Ops 2, but while the action around players has slowed considerably when compared to Modern Warfare 3's unfettered madness, there is a renewed emphasis on fast, pure gun vs gun gameplay that revolves around balance.

“The measure of your skill isn’t just in how good your kill-death ratio is, gauged instead by the overall contribution to your team’s final score, and this is another area where Treyarch has really thought about what Call of Duty was lacking.”

Newcomers and regulars will have a tough time adjusting to Treyarch's new hit detection mechanic. Players take less shots to go down then ever before, and body placement is more important than ever. Shoot an opponent below the waist in a stand-off and you're already dead. Precision is vital now, and that's something anyone who has felt cheated by Call of Duty games in the past will surely appreciate.

This revised damage model works on most counts but it still feels like it needs further iteration, as inconsistent damage and questionable deaths begin to return. Knife lunge has also been reduced significantly but panic knifing remains an issue.

It does mean that the amount of bogus knife deaths per game has gone down, but the mechanic seems to stumble even when you're toe to toe with players, as your point-blank swipe fails to register.

Still, arguably the biggest change to the series' selection box of staples is the overhauled create-a-class system. Birthed at Treyarch from a paper board game called 'Pick 10', the system gives you ten points to spend on any gear you want.

Everything costs one point, from guns and attachments, to lethal devices and perks. It's amazing how quickly your allowance runs dry when trying to replicate your favourite classes from previous Call of Duty instalments. That mindset doesn't fly here any more, and while the model reduces unbalance it often feels curbing. 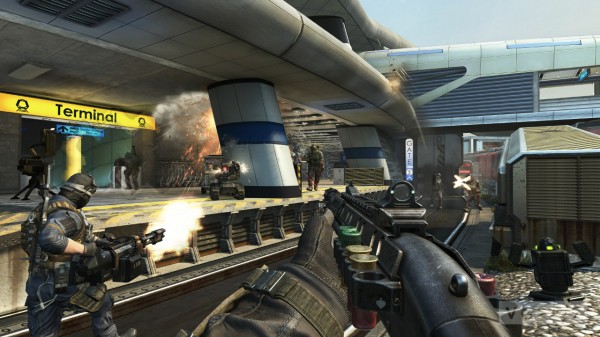 It has been meticulously geared towards keeping everyone on a relatively level playing field. Sure you might have a player with four perks, but he or she will have to sacrifice grenades or their secondary weapon for the pleasure.

The system marks the death of the overpowered 'win-all' class, and it's the best move Treyarch could have made. However, Wildcards bend the rules at the cost of a point and allow you to carry one extra perk, grenade or tactical device, among others.

Score Streaks are the next big change and these do away with killstreak rewards altogether. Now the measure of your skill isn't just in how good your kill-death ratio is, gauged instead by the overall contribution to your team's final score, and this is another area where Treyarch has really thought about what Call of Duty was lacking.

You will have a really hard time earning Score Streak rewards by just killing people. Chances are you'll occasionally get your lowest tiered option – such as a UAV or Hunter Killer drone, but heavy hitters like the AGR robotic turret or the Lightning Strike bombing run will require cooperation to reach.

“Score Streak rewards have also been well-planned to remove avenues for air supremacy. Nightmares of Modern Warfare 2 rounds spent huddled indoors away from the watchful cannons of an AC-130 are a thing of the past.”

Obviously objective-based game types are a better way of boosting your Score Streak given their teamwork nature, and as such Team Deathmatch rarely sees an abundance of active score rewards.

New mode Hard Point is perfect for teamwork – which is based on King of the Hill rules – as you receive bonus score for getting multi-kills, defending objectives and using your tool-set wisely. Chaining these factors is the key to earning quick rewards, and racking up high scores is certainly gratifying.

The low score rewards for vanilla kills dulls the desire to go on lone wolf missions around each of the 14 maps,instead fuelling cooperation. Solo play and kill-grinding will likely continue, but the means are here to get people working together more efficiently.

Score Streak rewards have also been well-planned to remove avenues for air supremacy. Nightmares of Modern Warfare 2 rounds spent huddled indoors away from the watchful cannons of an AC-130 are a thing of the past, and instead you have a manner of robotic threats to contend with.

Many of these rewards have secondary functions, such as detonating a Hellstorm Missile mid-flight to create a cluster bomb affect over a wide area, or taking over from the AI and controlling your AGR, Dragonfire or Sentry Gun manually. The added layer of control is certainly welcome.

Perks have also been down-tuned to offer mild buffs such as Lightweight's faster movement and Blind Eye's protection against air support. The polarising Ghost perk is now unlocked at level 55, which is the last rank. It now only hides players off the radar when they are moving, exposing campers at all times. It shows that Treyarch has been listening to fans. 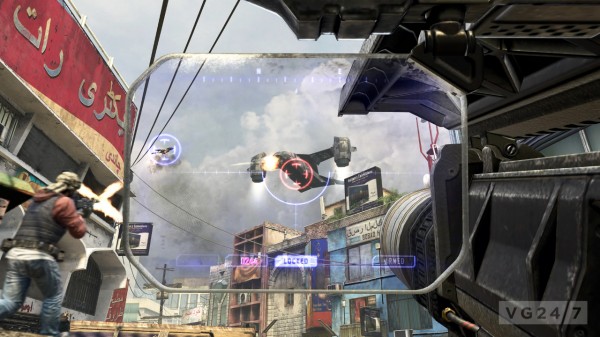 Instead, gun upgrades acquired through skill make more of a difference, such as stabilising fore grip, select fire modules, FMJ rounds and an MMS scope that paints enemies through walls.

The weapon themselves are relatively equal in power, and there are little surprises, except the first three-round burst rifle – the SWAT-556 feels like another Type-95 at first – but then you soon realise that it's not as powerful as it first feels, just more stable.

There are subtle handling differences here and there that will help you decide which is the firearm for you, but if you've played Call of Duty before you will pretty much know what to expect. The only big change is the select fire attachment that lets you switch between single shot and automatic discharge.

“Call of Duty: Black Ops 2 offers – at a mechanic level – the best multiplayer experience the series has delivered. It’s an actual test of skill, not killstreak chaining, manipulative load-out mixing or anything that might seem a tad unscrupulous to players.”

Good tools are nothing without fun maps however, and while the original Black Ops maps – as garish as they seem now – had character, the same cannot be said for all of the new locales. There is a clinical vibe running throughout these arenas, as robotic as the drones and robots running around them.

There are a few stand-out maps however, such as the circular bullet train station Express, which occasionally sees a high speed shuttle barrel round the track, hammering any people or devices in its path.

Raid is a sore point, as its open areas and blind spots make every manoeuvre potentially suicidal. This map is an example of the anti-camping ethos run amok. Metldown on the other hand is a campers paradise, giving players plenty of cover to hunker down behind and slaughter you with ease as you pass.

It's a mixed bunch, but it frankly shits all over Modern Warfare 3's selection. Some maps are the usual facilities that you're probably bored of by now, but the moving robot factory in Drone, the shifting freight containers of Cargo, and the futuristic cruise ship of Hijacked feel fresh and expertly designed.

Call of Duty: Black Ops 2 offers - at a mechanic level - the best multiplayer experience the series has delivered. It's an actual test of skill, not killstreak chaining, manipulative load-out mixing or anything that might seem a tad unscrupulous to players. But the game will likely receive the usual torrent of flack from sceptics.

Treyarch has shown that it has the development chops to take a slight gamble with its latest multiplayer, just as FIFA 13 took a gamble with its expanded trick system and First Touch engine. That's what Call of Duty is after all, a yearly sports game, but with big fuck-off guns instead of a football.

As such Treyarch deserves praise for looking at many of the areas fans took umbrage with, actually listening, then tweaking and rebalancing them for the greater good. The life and soul of the party may have diminished slightly, and some areas may still exist to infuriate, but there is still plenty of fun to be had for now.