DICE and EA are heading back to WW2 in Battlefield V, the next instalment in the popular man shooter series, now with women and customisable tanks.

Whilst the concept of a game based around WW2 isn’t exactly ground-breaking, Battlefield 5 promises to give players a completely new perspective and experience of battles that featured in WW2, such as looking at resistance movements in Norway, a look into what happened in Holland and focusing on regions of France that aren’t Normandy.

EA has tried to distance itself from lootboxes, microtransactions and cost-heavy, content-light DLC since the Battlefront 2 debacle, so instead of a season pass it is offering a free live service called Tides of War which changes the game's content every few months, which will hopefully keep the game fresh and employ some innovative mechanics.

Dogged by controversy because of the inclusion of women in the main campaign and box art, our main advice to players who don’t want to play as, with or alongside women is: don’t by the game. For everyone else, let’s take a look at what’s in store.

Battlefield 5’s release date has been pushed back to November 20, 2018, to allow developer DICE to “make final adjustments to core gameplay”.

There are two version of Battlefield 5 which are available to pre-order:

With the Standard Edition, you get:

With the Deluxe Edition, you get all of the above plus:

In a recent blog post, DICE addressed the major points of discussion coming out of the Battlefield 5 beta and the changes we can expect at launch.

Firestorm is available to four-player squads, and it supports up to 64 players in total just like a regular Battlefield multiplayer match. Tanks do make a return, but it’s not clear how players will be able to acquire them as of yet. Firestorm progression is also tied to the main game’s Company – a player's collection of soldiers, weapons, and vehicles which levels up alongside the player, so high-level players may ahve a slight advantage in this mode. Criterion Games is behind Firestorm, so it will be interesting to see how it fits in with EA and DICE’s style.

Players will airdrop onto the largest map in Battlefield history with no fixed loadout, so you’ll have to scramble to search for weapons and supplies. Firestorm will also feature Conquest-style objectives, some random and others recurring at fixed locations to help you secure some gear.

Fans of the series fell out of love with the lengthy cutscenes and over-dramatisation of the previous instalments. Battlefield 5 is set to return as a pure, unadulterated shooter with more options for players than ever before, including the new Fortifications feature which adds a more realistic and practical tool to what can be a very frantic game. Fortifications can be used tactically in various ways, such as digging a hole for cover, setting up a mounted machine gun down a narrow choke point and creating sandbag coverage for your squad.

It should be noted, however, that the fortification tool won’t be like that seen in Fortnite - it’s a lot more strategic and not a free mode, so you won’t just suddenly turn a corner and see another player making a tower of sandbags. 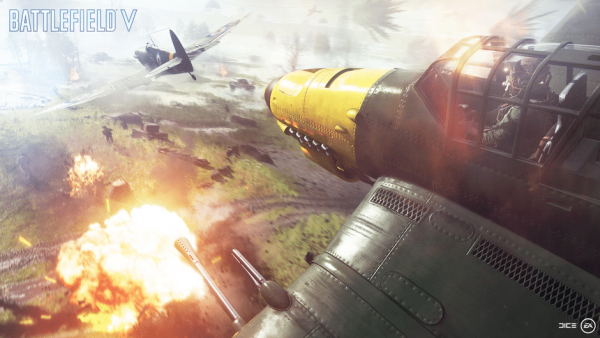 There will also be real-time ray reflections in the likes of water, parked cars and mirrors, allowing for a much more realistic tracking feel when playing at 60 FPS on the PC. You’ll also only be able to pinpoint an exact location with your binoculars. Spotting now places a contextual marker which shows your distance to an object or person but doesn’t highlight nearby enemies, which is a much more realistic POV as opposed to being able to highlight people hidden behind walls with your x-ray vision.

Scarcity of ammo and resources has been drafted in to add another realistic theme to the game. You’ll be expected to ask Support classes for supplies and loot ammo from fallen enemies or comrades. The respawn screen has also changed; rather than watch yourself bleed to death, you can view how your squad is playing and decide if you want to go back to redeployment or spawn.

Revives can be done by any class but are substantially slower and give less health than those done by the Medic class. Only a Medkit dropped by a Medic can give you full health.

DICE has recently revealed the different types of classes and combat roles that will be available in Battlefield 5. The four classes are:

You can find an overview of class and its combat roles here to plan ahead for what kind of soldier you want to be in Battlefield 5.

Battlefield 5 will have War Stories as its single-player campaign, the first of which is the story of a female resistance fighter in Norway. DICE and EA have been quiet on the matter, probably due to some of the backlash about there being women in the game.

The multiplayer campaigns in Battlefield V are:

Grand Operations is a revamp of Operations from Battlefield 1 and will play out over four in-game days with each day representing a new phase. Ending in the usual Last Man Standing fashion, the first team to eliminate all enemy soldiers wins.

There’s also a four-player co-op mode, Combined Arms, which are multi-objective battles based on the idea of infiltrating and extracting. The missions are randomly generated so it’ll stay fresh as a concept.

You’ll be able to use your created character across all multiplayer modes and the rewards you earn will be usable across all modes, too.

Tides of War is the season pass replacement that will change every few months or so, giving players new missions, limited-time events, multiplayer maps and weapons, each representing a historically accurate phase of WW2. DICE has promised to capture the swift changes in the landscape during WW2 and this mode certainly does seem like it will deliver.

A specific Grand Operation for this Chapter will be available for a set time before disappearing forever. There will be specific items of loot and customisations you will unlock for each Chapter in Tides of War, so can show off to other players how much of a veteran you are.

Gunfire suppression is the bane of any FPS player's existence and made battles in Battlefield 1 a bit of a slog as your aim became worse the more fire you were under. In Battlefield 5, suppression will no longer affect the accuracy of your weapon.

Instead, you’ll see a suppression effect on your screen, but your bullets will hit where you’re aiming, as long as you are actually aiming at enemies and not into the walls. 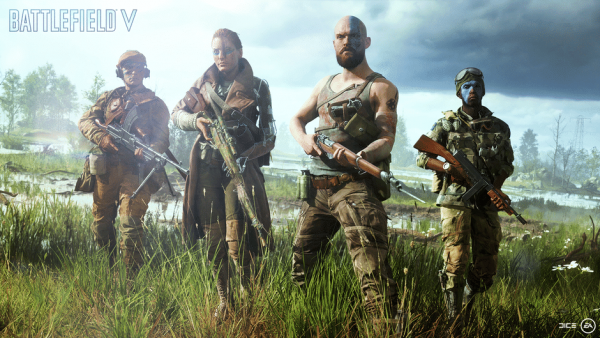 Random deviation is also gone, so recoil is much more predictable and manageable. Sights will centre themselves after firing and headshots will have their multiplier increased to 1.9x and the headshot hitbox will be larger.

Melee in Battlefield 5 is more of a tactical choice as opposed to a last-second button mash in a blind panic. In short, you’ll need to be up close and personal with your target for your melee attack to do any real damage.

Grenades remain largely unchanged with the exception being you’re able to throw back enemy grenades, providing you get the timing right.

Character creation has vastly improved in Battlefield 5, some of which is because you can play as a woman for the first time - The V in Battlefield V does stand for vagina, after all.

You can change the appearance of your soldier’s face, hair, insignias and even limbs if, like me, a claw-handed redhead is your muse.

Weapons and vehicles can be customised, too, and you can use the points you earn to unlock what you want as opposed to grinding through a tree of unlockable content.

There is a huge emphasis on customisation and individuality in Battlefield 5, which juxtaposes the faceless, too-many-to-name soldiers who were lost in WW2, letting us create an identity in a nod to the fallen.

And that's all we know about Battlefield 5 so far! We'll keep you updated as more information is released.