Nintendo made a fighting game with a slickness that only Nintendo can manage. 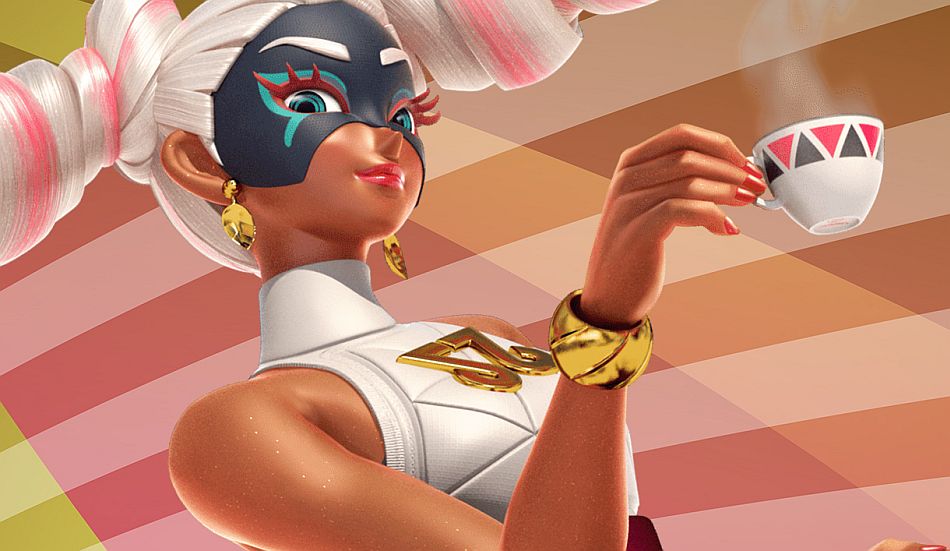 "ARMS is a fantastic idea for a fighter that's generally well-executed if lacking in areas, and its characters and general aesthetic are an absolute joy to behold."

Yeah, there's Smash Bros - but that isn't a real fighting game anyway, not by design. (Fill your boots on this one in the comments - knock yourselves out). Smash was built as a fun, carefree party game and industrious fans have managed to build clever rules and walls around its content to make it viable as an esport. Fine. But ARMS is simpler: you could plug ARMS into an esports setting and it'd be at home right away.

This fact works both for and against ARMS depending on the angle you approach it from. At a basic level it feels like ARMS might've looked to two specific seminal games for inspiration: Street Fighter 2 and Nintendo's own Splatoon.

What I mean by this is that ARMS carries the feature set that was pretty much defined as the standard for fighting games by the console ports of SF2. There's an arcade mode (here called Grand Prix) where you face a series of fights interspersed with non-fighting rounds. In ARMS instead of battering a car or barrel busting you're basketball dunking and hitting pop-up targets, but the flow is the same. 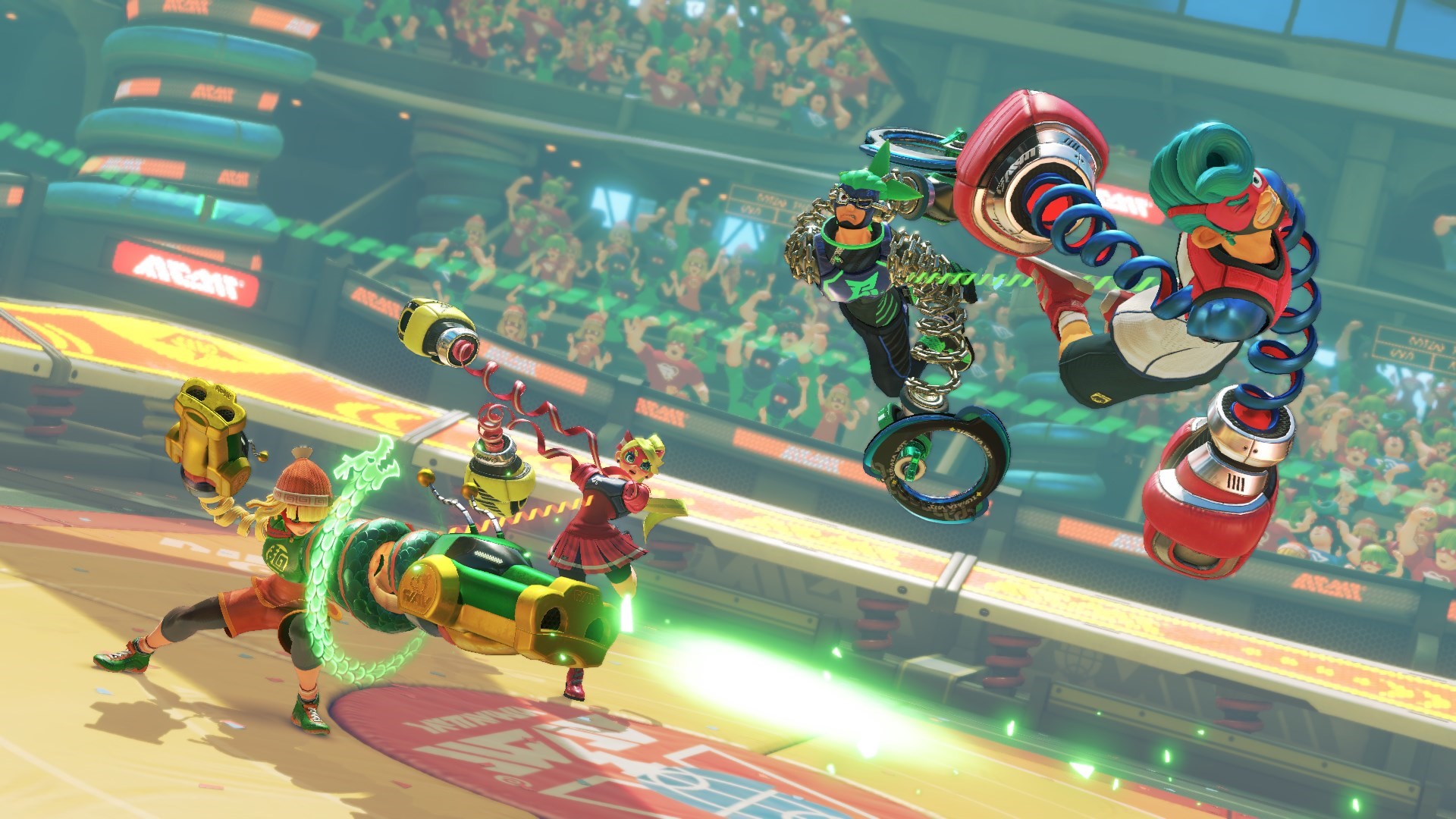 Then there's... well, a versus mode, an ranked and unranked online versus modes, local wireless system connect multiplayer, and... well, that's it. The multiplayer modes, to their credit, include multiplayer versions of the extra minigames, plus volleyball.

This is where ARMS falls down a little by modern standards: as other recent fighters proved, you need more than the classic feature set to launch a fighting game these days. The content in ARMS feels a little thin on the ground for a full-priced game, though like Splatoon the game has been promised a slew of free post-release content that should beefen up the game considerably.

The fact that the content is spread a little thin is a shame, because what the game shares in common with Splatoon is strength of game design and general game design philosophy. ARMS is a fantastic idea for a fighter that's generally well-executed if lacking in areas, and its characters and general aesthetic are an absolute joy to behold. The music, which ties the whole bundle together, is as perfect a fit for ARMS as the bubblegum punk attitude that powered Splatoon. It feels like nobody but Nintendo could've quite pulled this off this way.

It all just works. I think some of the character designs are absolutely exquisite, and I really do look forward to an ARMS fighter (preferably fanart bait Twintelle) showing up in Smash Bros. Some of these are characters I'd buy amiibo of; I'm into the look, world, design and little story details about each that much.

There's a minimalism to how these characters are introduced in a way that again resembles the muddled backstories of the fighters of the 90s, but these characters are vibrant and distinct all the same. There's a strong diversity balance here too, for what it's worth, with a good number of women and characters of colour - something Nintendo hasn't always been great at. 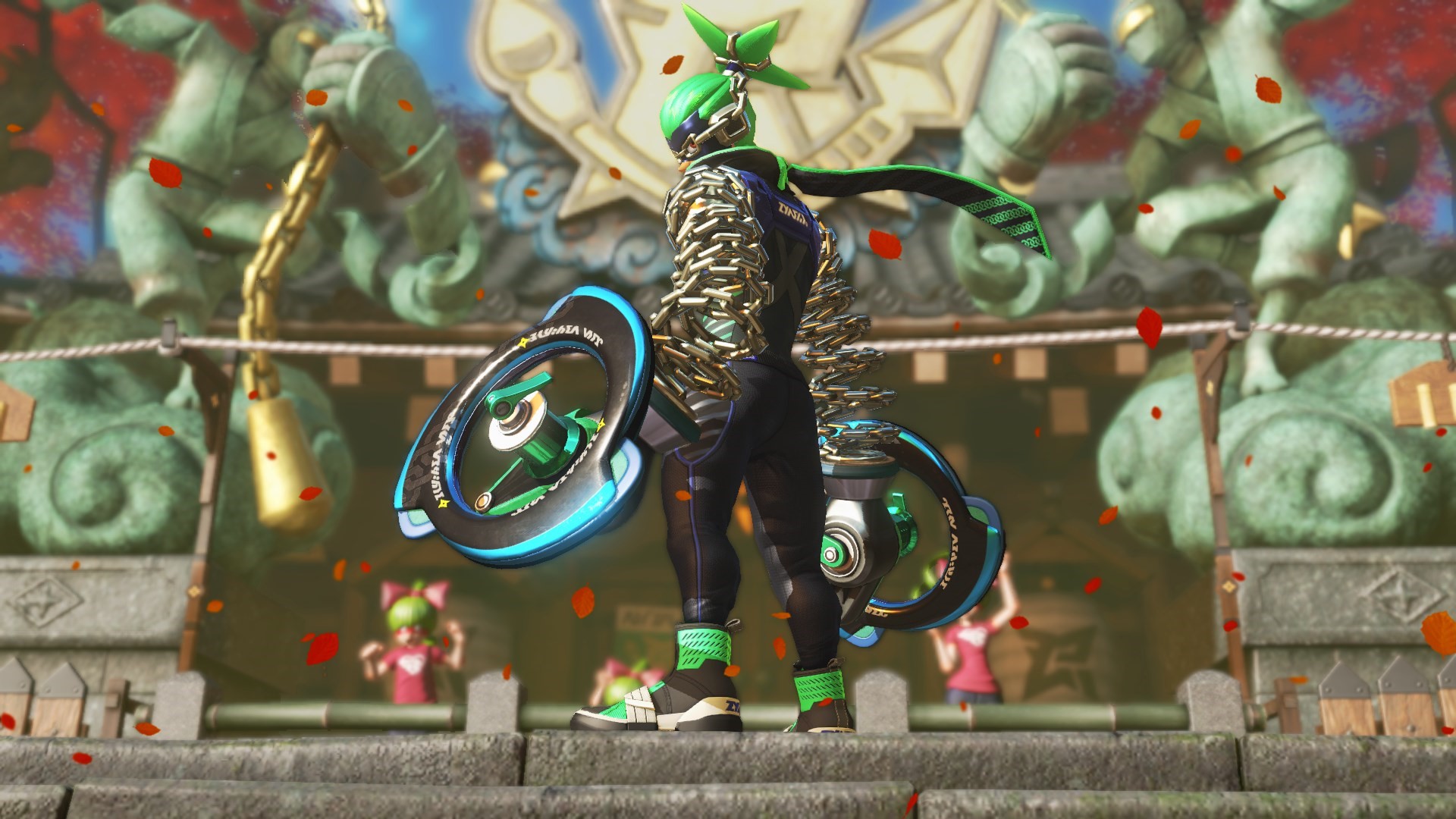 All of these characters have their own unique little quirks that set them apart plus their own home stage. Stages have basic stage hazards that change the game, but not in a 'whoops, you're dead' Smash Bros. way.

"When I had friends over to try out the game some were able to grasp the motion controls in a few minutes while others struggled, finding them obtuse and unresponsive and the 'thumbs up' way it asks you to hold the controllers cramping."

There's some small unlockable action in the form of being able to unlock extra Arms for each fighter with in-game currency, since the two you choose to go into battle with will impact your abilities. This customization is kept simple, but this also keeps it as a more pure, traditional fighting experience.

I get the impression today's reviews and the general public consensus is going to differ greatly on the quality of the motion-based controls, but I actually quite enjoy them. There's an imprecision to them, obviously, but something about the medium range at which ARMS fights take place make that work for me. It's certainly a step up from and a good evolution on the motion controls of, say, Punch-Out on Wii.

If you dislike the motion control stuff, ARMS doesn't neglect any of the Switch control options. You can play with two joy-cons in a non-motion setting either in handheld mode or in the joy-con grip. You can also play one joy-con per player for two-player action, or with a pro controller. All work.

The quality varies (the one joy-con mode is far from ideal) but it's great to see Nintendo leaning into the Switch's unique feature by supporting all of these control modes. Crucially, this doesn't feel like a Star Fox Zero game where ARMS was made specifically to support and justify all these control modes to the game's detriment - it feels natural. 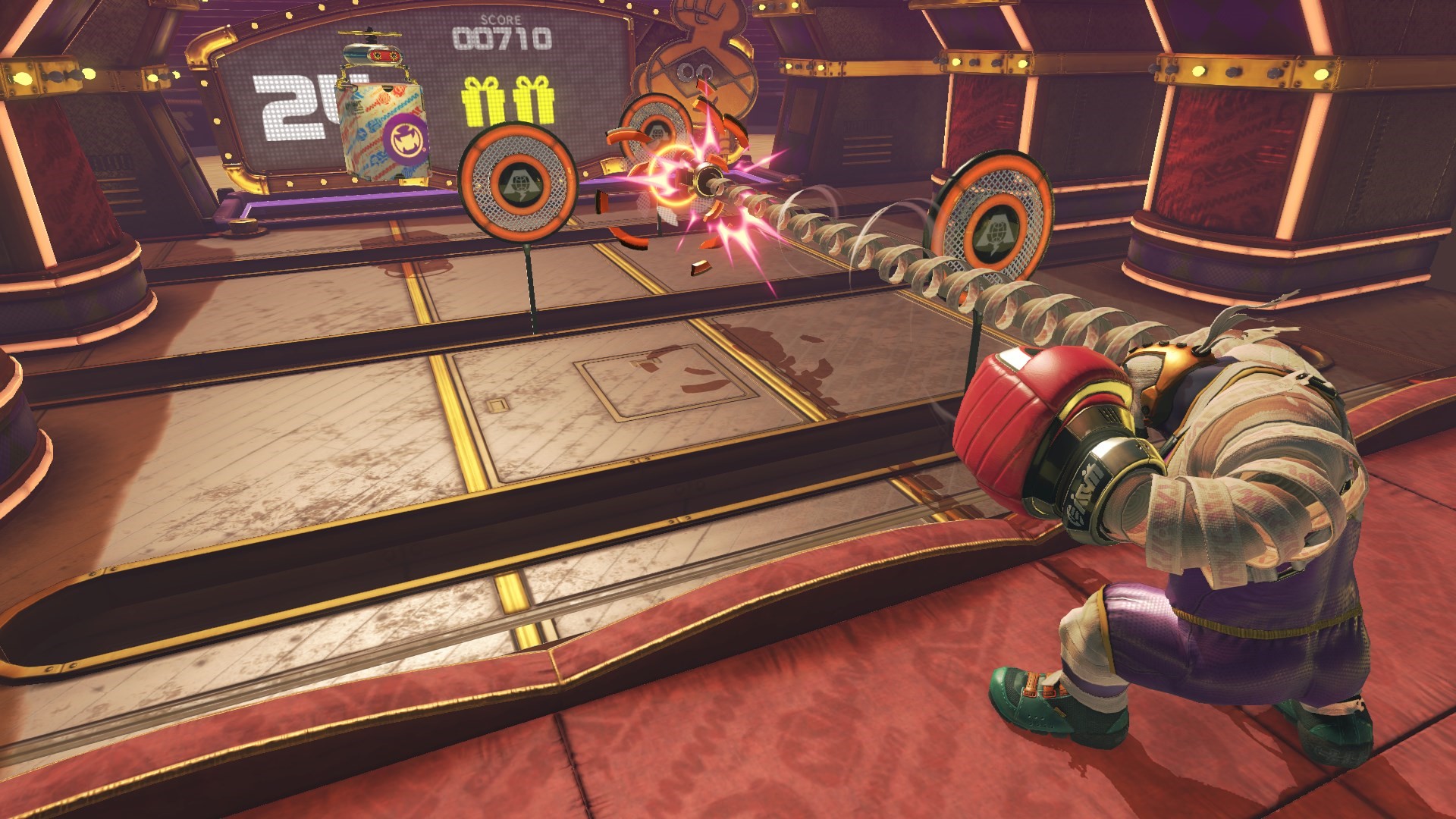 With that said, I can't stress enough how much this feels like a 'your mileage may vary' moment. When I had friends over to try out the game some were able to grasp the motion controls in a few minutes while others struggled, finding them obtuse and unresponsive and the 'thumbs up' way it asks you to hold the controllers cramping. I didn't have any of these problems, and that obviously made it a lot easier for me to really dig in and enjoy what ARMS has to offer.

In case it's unclear, I should point out that you can use any of these control schemes to get into split-screen multiplayer combat, too.

I meant what I said earlier: ARMS could easily be plugged into the esports scene and have some success. It's still very much at home as a party game, though, and the motion controls are of course practically begging for kids or sloppy, drunken adults to embrace them whole-heartedly. It'll be a good party game too - but like SF2, it feels like a party game with balance among its diverse and fun cast of characters. It feels like even with those controls there's nuance waiting to be uncovered.

I don't think ARMS is going to quite be the shocking, barnstorming success that Splatoon was, but it's a very worthy addition to the Switch library, especially if you're willing to invest the time to truly master its combat system and unique controls. Right now it's solid but lacking content, and I'm extremely curious if strong free DLC support can make it great.