When you're struggling for cash in Animal Crossing New Horizons, it can feel like you're missing out on the fun. To fill your pockets to the brim and help you on your way to becoming a bellionaire, here are our top tips for making money fast.

As always, Animal Crossing will quickly place you in debt with king capitalist Tom Nook as you arrive on your island. To pay him off, you'll want to make bells quickly.

They say money can't buy you happiness - and they're arguably right. We're not going to get that grim. But money does make the world go around, and that fact is no different in Animal Crossing's cutesy world filled with animal friends. Early on in your New Horizons deserted island adventure, things are a little different to traditional Animal Crossing games - you actually have no debt, as you pay Tom Nook back for your airfare and initial, basic lodgings using Nook Miles, the air miles and achievements style currency that is also used to do things like give you more inventory space. The moment you move to a brick and mortar house, however, you'll be in proper, unavoidable debt.

Now, for all that idiots on the internet like to demonize Tom Nook, it's not a bad deal all-in-all - there's no interest, no debt collectors and no pressure - but you will need to pay off your house before you can extend it to make more room for your stuff. Then again, and again... Your Animal Crossing life will be, once again, as much about simply getting lots of stuff as it is about making cool animal friends and relaxing. To do that you'll need lots of money - or bells, as the currency is called. 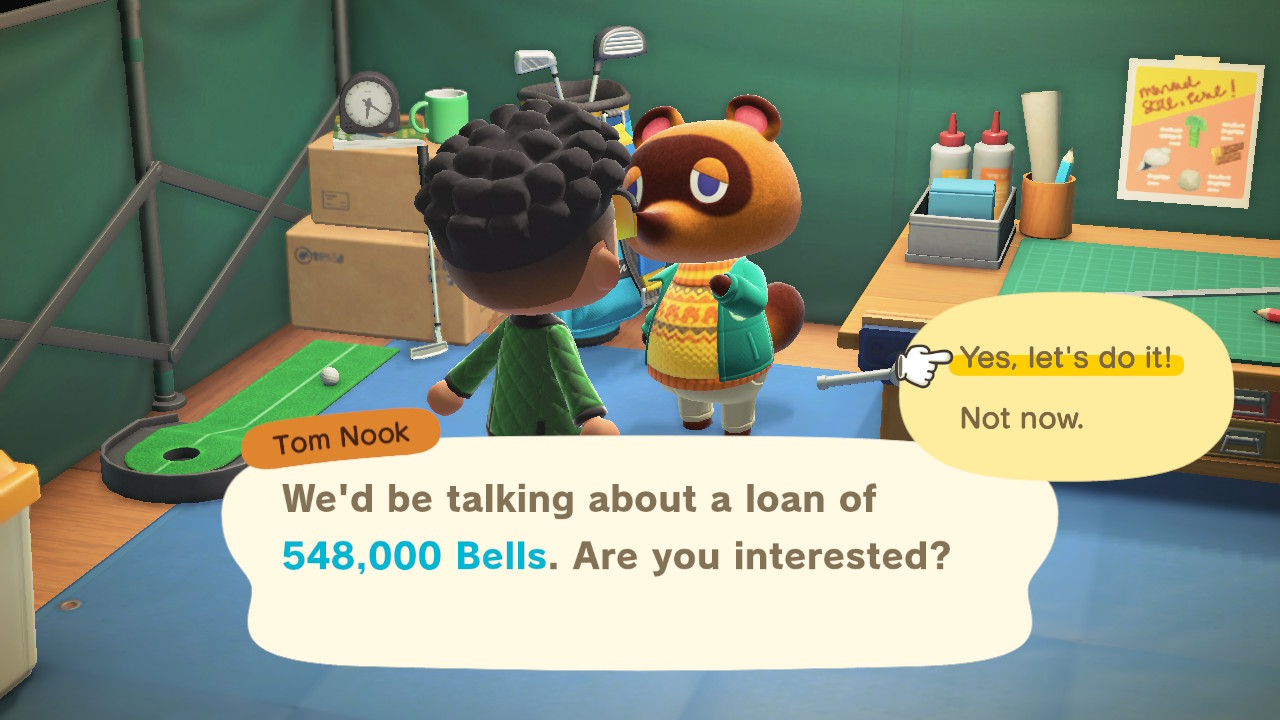 While making money in Animal Crossing is more about spending time, we do have some tips to maximize the number of bells you can make. It's all about carefully thinking about how you spend your time and resources to maximize impact. So - here are our tips on how to make lots of bells fast, reducing the amount of time you'll need to spend on the money grind.

As a reminder, all of the tips here are greatly dependent on you being a proactive island citizen. Go out and collect fruit from trees daily. Hit rocks to gather resources. Chop trees, and if you chop them down, replant. Fish and catch bugs regularly. Dig up every day's fossils, and sell any excess ones the museum doesn't need, etcetera. Sometimes shaking trees, hitting rocks, shooting down balloons or digging can even yield money directly. If you're not doing this, well... you're living island life wrong. 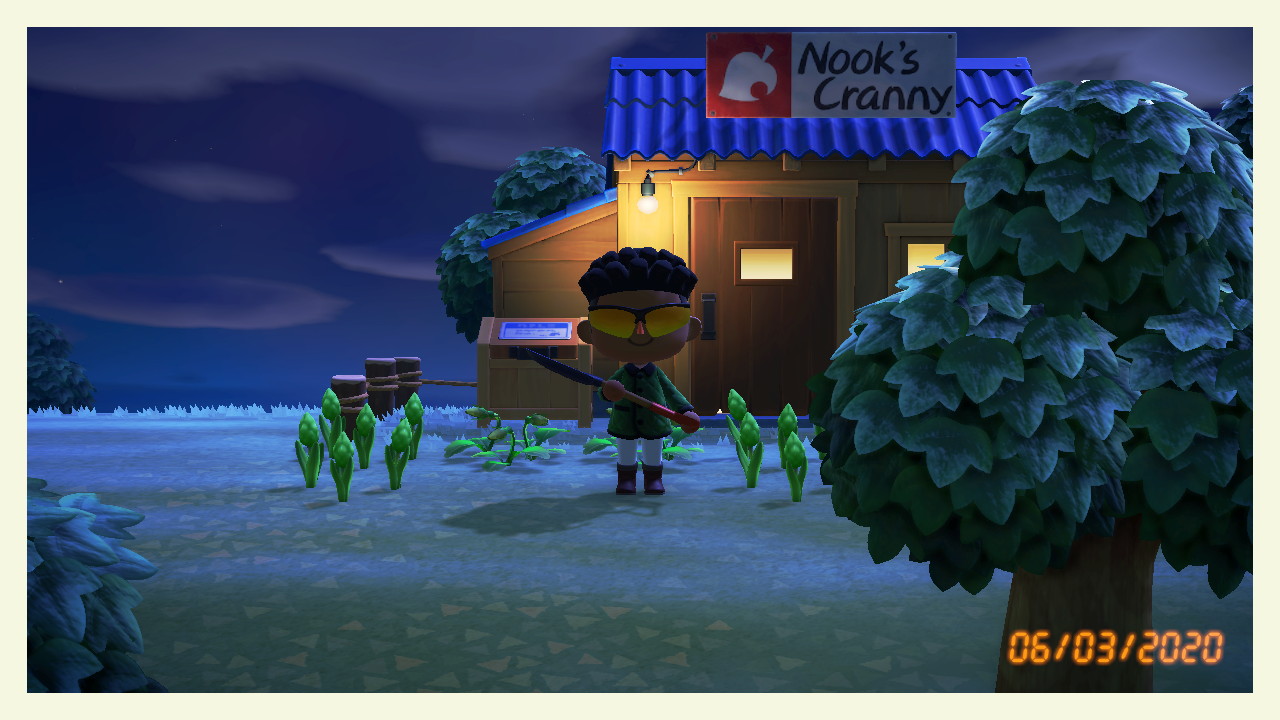 Sell items - but be careful who you sell them to

Just to get the obvious bit out of the way, the main way you'll make money in New Horizons, just as in every other Animal Crossing, is by selling items to get bells. The main vendor for item selling is Timmy and Tommy, who will initially set up shop inside the Residential Services tent and later move to their own digs in the form of a revived Nook's Cranny shop. They will be your main point of contact for item sales.

However, they're not your only point of contact. There are two special NPC animals who will visit your island once a week once the island grows enough. They are C.J. the beaver and Flick the chameleon. As their races might suggest, C.J. loves fish and Flick loves bugs. They both offer you quests related to catching fish and bugs, and they can both provide you with unique items. But crucially, this pair also pay out a premium price for fish and bugs when compared to the price Timmy and Tommy will pay. Keep that in mind.

As far as Timmy and Tommy go, early on they're quite simple with a flat price for everything, and you can reach them 24 hours a day. Once they open Nook's Cranny (with your help - and yet you get no discount!) they'll have set opening hours but also have a drop box outside the store where you can drop stuff off to sell to them - you'll get the money in the morning. Once they're in Nook's Cranny you'll also be able to earn extra money by selling the day's 'Hot Item'. This changes daily, and it seems the game is smart enough that it'll be something you can lay your hands on. Often, it'll be something you can craft. On that topic...

One relatively new addition in Animal Crossing New Horizons is that of a more fleshed-out crafting system where the player character can collect crafting recipes and resources such as wood, iron and clay and then combine them to create items from scratch. The point here is simple: often, it's more economical to craft items from the raw materials then sell the items than it is to sell the raw materials.

Here's an example or two. If you fish an Old Tyre out of the water, you can sell it to Nook's Cranny for 10 Bells. If you take the Old Tyre to a crafting station and craft a Tyre Toy item, however, it'll be worth 20 bells. Another: you'll get 750 bells for two Iron Nuggets. That same number of Iron Nuggets can be used to craft a Frying Pan, which sells for 1500 Bells. That's double your money!

This is obviously a time-consuming activity. But if you're early on in your island experience, it doesn't hurt remotely to craft excess raw materials into items before you sell them. And remember, you probably want to keep at least a little of each back, as sometimes wood and iron, in particular, are used to gate progression where you'll need to turn some in to open up new shops or build new infrastructure. 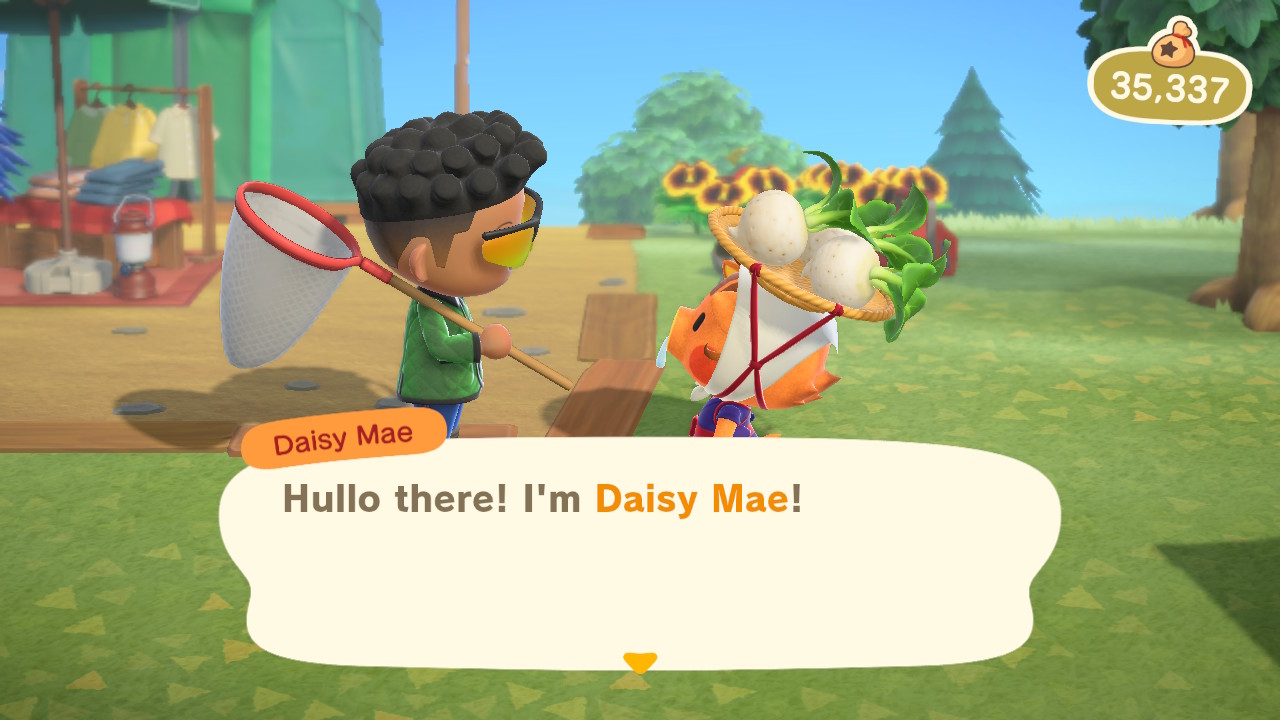 Import foreign fruit to sell it - and grow perfect fruit

As we hinted at further up the page, a staple of any Animal Crossing economy is the collection and sale of fruit. Fruit will sprout on trees around your island pretty much daily, and if you shake the trees or hit them with an axe you'll they'll fall to be collected. You can then sell these fruit to Timmy and Tommy for a profit. Simple, right?

Well, it's not that simple. For one, every island has a 'native' type of fruit. This is the fruit found on your island naturally when you first fly in. This can be sold, but since they're in abundance they're not that valuable. You'll get far more bells for foreign fruit imported from elsewhere. The easy way to get foreign fruit is to visit another island - either through a Nook Miles ticket, which gives you a random chance to visit a foreign fruit paradise, or through multiplayer, where you can coordinate with a friend who has differing fruit.

Once you have a foreign fruit, you can bring it back to your island to sell. Better yet, you can plant it on your island. This means in a few days a tree will sprout that will yield that fruit - providing long-term gains. I dedicated one whole corner of my island to turn it into a foreign fruit paradise, which in turn earned me many bells.

As well, there's Perfect Fruit, an Animal Crossing staple. This is a piece of fruit that is succulent, juicy and just all-around perfect. Because of its perfect nature, it is heavily in demand. These are worth a huge amount of money but are very rare. They appear at random, but here's one key tip: if you get a perfect fruit (and it'll be obvious if you do, as it looks lush and impressive), you should plant it. Plant a perfect fruit and the first crop from that tree (which is fragile - don't go chopping it with an axe!) will all be perfect - so that's three more perfect fruit. This only goes for the first crop - but then you can take one of those perfect fruit and plant that, and create a chain of perfection going down. Only non-native perfect fruit can be farmed in this way.

Finally, you can also bury cash bags in the ground to grow money trees. For example, if you bury 10,000 bells, in a few days a tree will grow bearing three bags each containing 10,000 bells! A worthy investment.

Once a week, every Sunday, an NPC animal, Daisy Mae, will be wandering your island. She's taking over the role from her grandmother Joan, and Animal Crossing fans will be pleased to hear that despite the management change the Stalk Market is back in this game in much the same way. It's Animal Crossing's take on the stock market, and it's all about turnips. 'Cos of course it is.

Anyway, for the uninitiated, it's pretty simple: on a Sunday you have a chance to buy Turnips from Daisy Mae at a set price. Throughout the week the price of Turnips at Nook's Cranny will vary greatly, twice a day, to the point where selling them might net you a huge profit in bells or a loss of your hard-earned money. You simply have to keep an eye on the market by checking in with Timmy and Tommy and sell at the right time.

If you don't sell your Turnips before the following Sunday, they go stale and become worthless. So it's a risk-versus-reward way of making money - but it can be extremely rewarding. Molly Mae will start showing up the first Sunday after you've helped to have Nook's Cranny built.

Check Animal Crossing forums and Reddit for players with the best turnip prices. You can go and visit them for a big pay day, usually in exchange for a few items or a share of your cash.

Zach Soares on Twitter found an ingenious exploit which can net you more than 200,000 Bells in a single run - although it takes some work to pull off.

When you visit a random island with Dodo Airlines, you can turn any island into a spider island filled with valuable tarantulas with this method. For the long version check out our full guide on creating a spider island to earn loads of bells, but the short version is this - you need to:

This should make loads of spiders and tarantulas spawn on the island. Creepy! There have been reports that this doesn't work in the Southern hemisphere, and that if you're on an island that doesn't spawn bugs naturally, then it won't work. It's worked for us, however, and it earns you hundreds of thousands of bells.

For more on Animal Crossing: New Horizons, here is our full list of guides!