A major new addition in Animal Crossing New Horizons is a new crafting system. Crafting requires items to perform - ingredients for each recipe.

The crafting in Animal Crossing is greatly simplified compared to the same sort of mechanic in a game like Minecraft, but the basic idea is the same - there's just a lot less items to worry about. Generally speaking, any crafting recipe in Animal Crossing will require a few of a handful of items: sticks, stones, iron nuggets, clay and three different varieties of wood. Some items also require other items - so you'll craft one item, then combine it with other ingredients to turn it into something else. There are also recipes that use other items, like fruit or flowers, but by far the most common ingredients are the core seven mentioned just now. Make sense? I hope so.

Crafting is vital as it lets you do everything from create better, more durable tools to build items like the ladder to allow you to travel the island in full. To help you along in the process, we've listed below the best and fastest ways to get each of the core crafting ingredients. 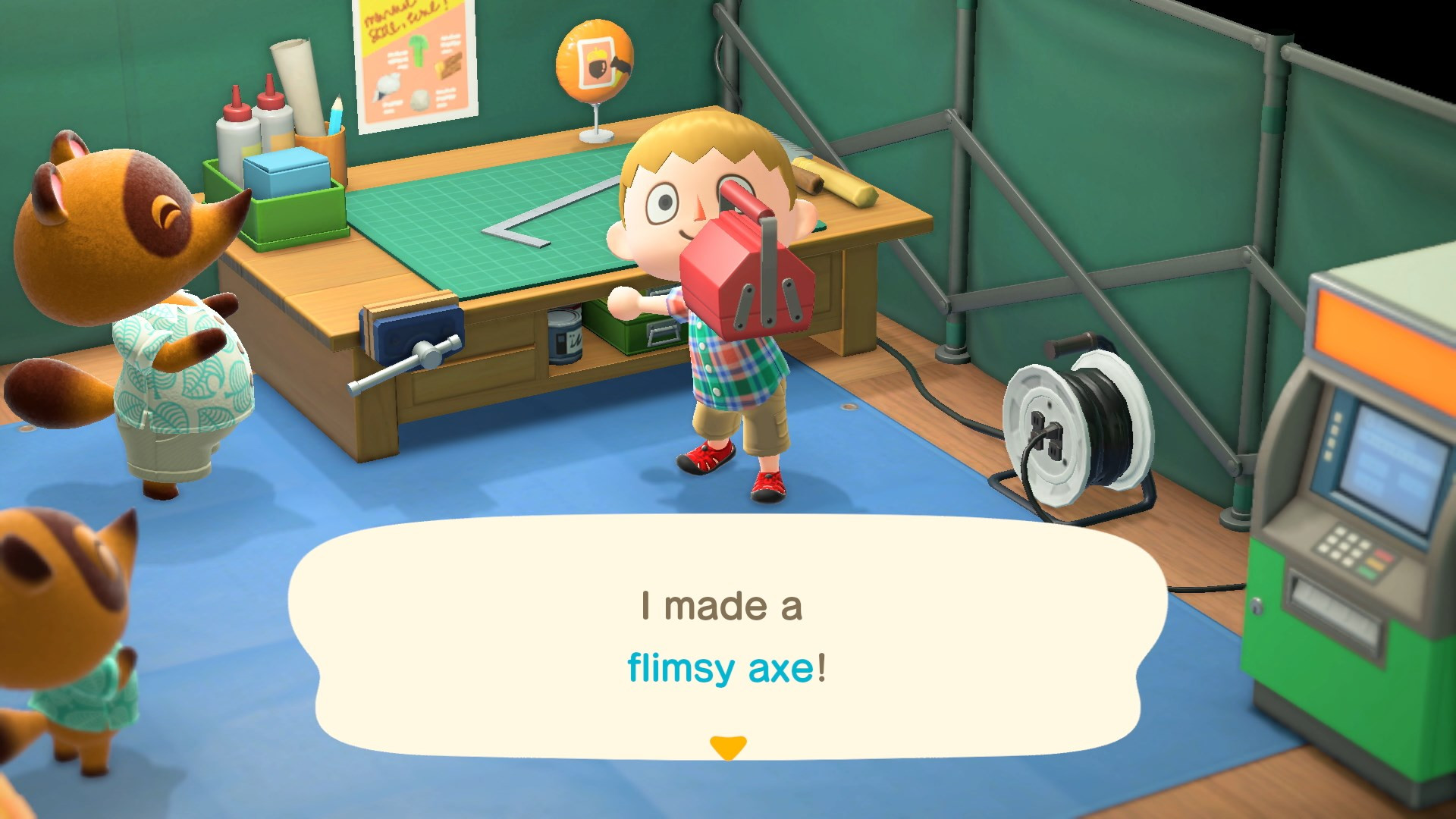 How to get Iron Nuggets fast, plus Clay and Stone

While wood will form the basis of almost everything you can make in Animal Crossing's latest adventure, there are some other key recipe items you'll always need a bunch of for crafting in New Horizons. They are Iron Nuggets, Clay and Stone - all pretty simple. In a lucky twist, they're all obtained in more or less the same way.

All three of these resources are found from within the large stones you'll find both on your home island and the islands you'll visit at random when you buy and use a Nook Miles Ticket. Hit these rocks with an axe or shovel in order to spawn Iron Nuggets, Clay or Stone. Which exactly you get will be random, and you'll get anywhere between one and nine resources per rock, once per day.

Iron Nuggets in particular are an in-demand item used in an awful lot of crafting recipes. Given your island will only have three to five rocks on it, there's a finite amount you can naturally spawn each day - but if you spend a Nook Miles ticket to visit an island, you'll be pretty much guaranteed at least another three or four rocks that you can hit to net yourself more Iron Nuggets, Clay or Stone.

Stones can also occasionally be fished out of the river one at a time - but this, obviously, isn't an economical use of time.

A bit of important housekeeping: if you eat a fruit and then hit a rock, it will shatter, leaving behind a single stone. This is useful for landscaping and clearing space, but not so useful if you want to use that rock again the next day.

Each time you eat a fruit it'll fill up an on-screen counter that maxes out at ten: this is the number of super-strength, fruit-powered actions like smashing rocks that you can perform, so keep that in mind. 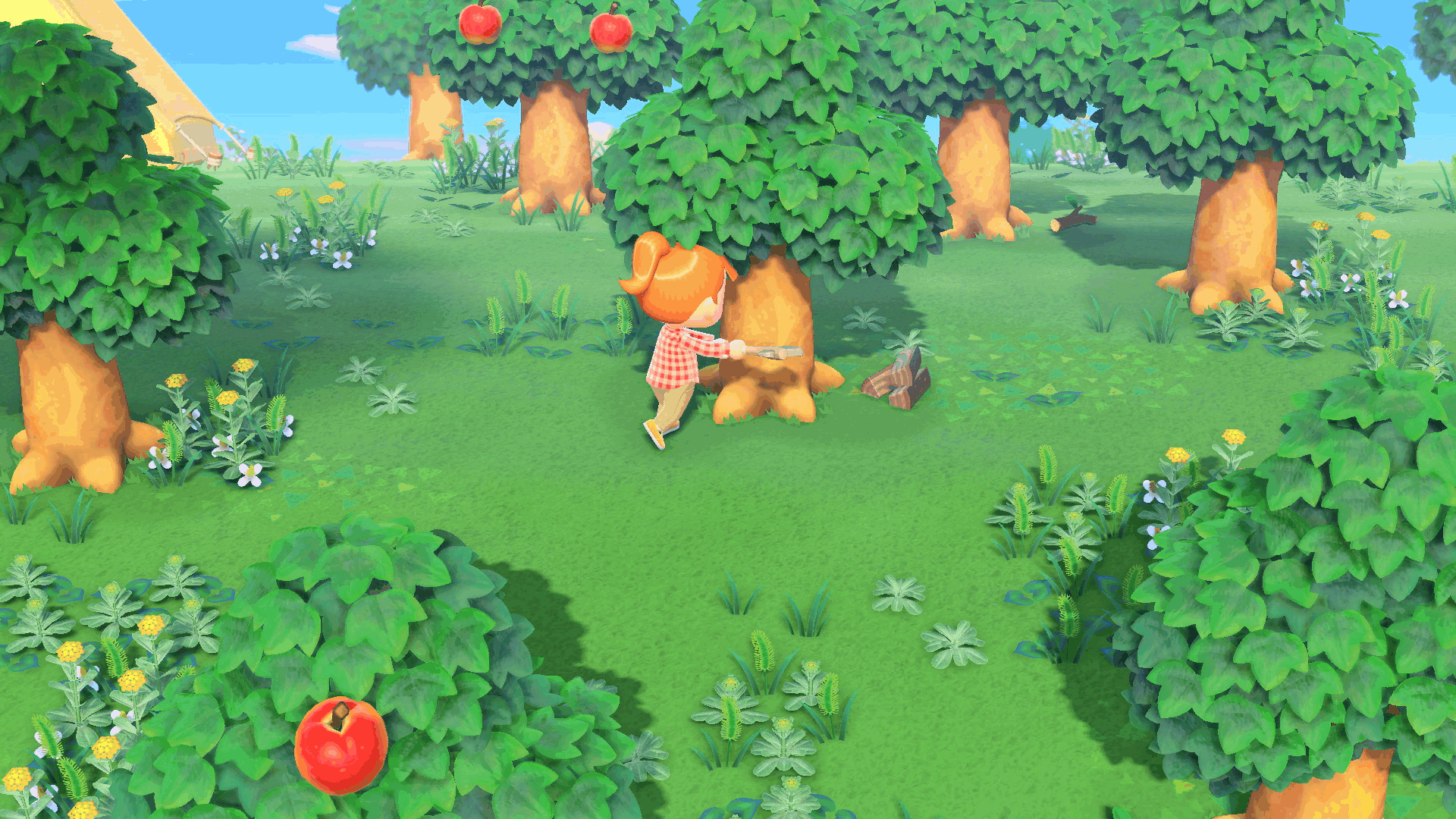 How to get Wood, chop down trees and remove tree stumps

The other main ingredient for almost every crafting recipe in Animal Crossing New Horizons is good ol' wood. You need it in all these crafty games - from Minecraft to Stardew Valley and now Animal Crossing, if you're gonna get crafty you've gotta get wood. Simple as.

Anyway, wood comes in three varieties in Animal Crossing: wood, softwood and hardwood. You get all three by chopping trees - each tree will yield you up to three pieces of wood a day, and which type of wood drops each time is entirely random. This is the case for all types of tree in the game, regardless of what they look like or what fruit they bear. Beware, however, as if you chop a tree three times with a tool that isn't of the flimsy variety, it'll chop down the whole tree.

You don't want to chop down trees too much as it'll deplete the amount of fruit you can get, and fruit is itself a valuable crafting recipe component and a great thing to sell to earn lots of money. If you do chop down a tree, you can remove the tree stump simply by aiming at it and using your shovel. We highly suggest you replant fruit in order to replenish your tree stock.

If you've a sharper tool, we recommend simply hitting each tree twice. A well-stocked island should have plenty of trees to hit anyway.

How to get Sticks in Animal Crossing New Horizons

The final major basic ingredient you'll need is sticks. You can find sticks at the base of a bunch of trees in the morning, every morning, and the same will be true whenever you spend Tickets to visit another island. However, you can also get sticks another way: simply grab a tree and shake it, just like when you're trying to get fruit down. If you're lucky sticks will drop out - anywhere between one and four. Pick 'em up and you can use them for crafting.

For the record, chopping trees with an axe will not yield sticks - only wood.