Aliens: Colonial Marines launches today. Dave Cook returns to LV-426 to find out if Gearbox Software's shooter has been worth the long wait.

The game has a multiplayer season pass option and online DLC incoming. We covered the pass details here.

The game is also heading to Wii U before the end of March. Check out details of the release here.

Sega and Fox formally announced Colonial Marines in 2008. It's been in development for over four years, but it's not clear where that time has gone. Maybe we'll never know the full story of why the game took so long to make, but the end result certainly raises many difficult questions.

The campaign kicks off above planet LV-426 as lead grunt Corporal Winter leads an expedition to the Sulaco, home to the Colonial Marines from the movie. It's not long before you've encountered your first Xenomorph and got to grips with the Borderlands-esque control method. It all starts to fray at the seams once Weyland-Yutani mercs storm the ship and open fire.

While battling aliens is scrappy at best, tussling with human enemies makes it clear that many gamers owe Call of Duty an apology. Lots of people really dislike Activision's shooter franchise, but you'd be hasty to honestly deny that it boasts one of the best twitch-FPS control mechanics going. Remember, I said 'one of the best', not 'the best', before you verbally skin me alive in the comments section. 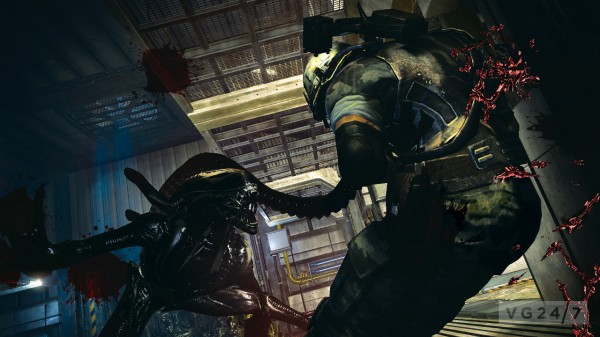 Aliens: Colonial Marines' human skirmishes feel old by comparison, like a game that truly did enter development in 2008 and somehow became trapped there like some vacuum-packed corn bread. Predictable AI sees enemies playing whack-a-mole from behind cover, as your Pulse Rifle judders around with some of the maddest recoil ever. It still sounds epic, mind you.

However, once that segment is done with, the game feels like it properly gets going for a few minutes down on LV-426, as you navigate through the Hadley's Hope colony and across the planet's surface. Battling Aliens never gets tiresome, but chances are it won't be enough for technically-minded players to paper over the frequently aged textures and robotic facial animation. The lip sync is also dire at points.

There are moments during the colony section that feel as if they might break the tedium. One segment sees Winter cocooned and stripped of his weapons, forced to walk slowly and silently between slumbering xenomorphs for fear of kicking the hornet's nest. It's probably the most tense section of the campaign, but Gearbox really hasn't pushed the fear button that hard. It might grip you at points, but never really falls into the horror genre.

Other moments that should have excelled end up falling flat. At one point Winter climbs inside a power loader mech and fights a Raven - a larger, more aggressive xenomorph - in a scene reminiscent of the movie's climax. It's terrible. The loader's swipes are inaccurate, and there's a lack of weight to the battle. It feels like a wasted opportunity to make something memorable.

Aliens: Colonial Marines is a tricky game to assess as it pales when compared to shooters like Battlefield 3 and Call of Duty, but it isn't really competing with either IP. When measured up against previous Aliens titles, it utterly smashes Rebellion's woefully poor Aliens Vs Predator into a million little pieces like a certain robot in another James Cameron film. But that's not saying much.

I'm even tempted to say - as a fan of the film - that Aliens: Colonial Marines surpasses the original Alien Vs Predator in terms of aesthetically staying true to the source material, all technical problems aside. If you're a big fan of the film and you simply must play this game, I'd consider getting it on the cheap, but those coming from a general shooter background will pick holes in it throughout.

This criticism mostly come from bugs. I experienced a lot of them while playing. One mission asked me to find two squad mates - Bella and Reid - who were supposed to have wandered off and got lost, except their avatars were still standing in the room with me. It was bizarre.

Ammo and armour pick-ups stick out of or sink into the scenery, and therefore can't be picked up. When knocked down into a last stand state your avatar's head can be knocked through walls, blocking your vision, and some of the checkpoints early on are brutally spaced apart on harder difficulty settings.

What should have been a fun boss encounter saw a giant bull alien stuck stationary in one spot high above the map. All I had to do was shoot it from the ground until it keeled over and fell back to earth.

Bullets sometimes pass through foes and explosive weapons like grenades offer a pitiful blast radius. Anything less than a direct impact will guarantee a kill. Aliens will often ignore your AI team-mates and zero in on you, as if they don't exist. The game fights you at every turn. 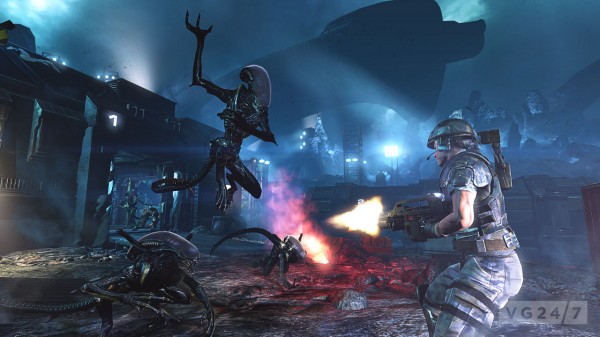 A little chat about online

By far the strongest element of the package is multiplayer. When battling through the campaign, players will level up, and this also ranks up their online character. Each level earned brings unlock points that can be spent on new weapon elements.

From reflex scopes and incendiary ammo, to stabilising stocks and underslung shotguns, there's a welcome but curtailed assortment of gear to earn, as well as gun camos, solder faces and armour decals. Xenomorphs can also level up during multiplayer and they too will unlock different body hues.

Due to the tactical play on offer - Xenos swarming marines from hidden vantage points, or marines combine motion trackers and firearms to prepare for attacks - multiplayer best matches the tense vibe of the film.

Team Deathmatch is a hoot, the panicked rush of Escape mode - which I covered in detail here - is a genuine riot and Survivor is your obligatory 4v4 horde mode offering. Only Extermination falls flat due to the need for solid teamwork. Playing with strangers sees it descend into an irritating mess when trying to defend alien egg points from attack. Squad up if you can.

But is the game worth getting on multiplayer alone? Well, if you have friends who want to properly get into it then yes, try the co-op campaign to rank up, then get involved and working together in PvP. Everyone else should exert caution when considering a full price purchase.

This truly is a case of personal opinion. Speaking objectively, the game has many flaws and feels old, but that simplistic, old-school corridor vibe may still appeal to fans of the original Alien Vs Predator, and that's about it. You could argue that the game feels almost quaint, but should we settle for second best in a year that will see polished shooters like Crysis 3 and BioShock Infinite go to market?

For every fleeting, enjoyable segment, there's an irritating one waiting around the corner to dampen the mood. As a fan of the film I'm personally willing to overlook a handful of issues, but they're too frequent and blatant to warrant £40-plus for the privilege.

I think - when stacked against technically superior shooters out there - a lot of people will feel like they've time travelled to 2008. Even then, there were better shooters knocking about. Aliens: Colonial Marines simply should have been better, and I'm genuinely intrigued to learn more about how the game ended up this way.

Disclosure: To write this appraisal, Sega sent Dave an Xbox 360 copy of Aliens: Colonial Marines. No other merchandise or advertising was offered or accepted.