There’s a chance this overpowered grenade will be patched out of Borderlands 3 soon, but in the meantime, here’s how to get your hands on the Porcelain Pipe Bomb.

For players who are looking to inflict some serious damage, the Porcelain Pipe Bomb is a must-have. It has an impressive base rate of damage and radius and it’s relatively easy to get a hold of given its power.

What makes it such a threat is its elemental damage, which can stack per second and can take down the most challenging bosses in one move.

When you throw it, it fires off little elemental projectiles all around, which can seriously dent the health bar of bosses and is an effective crowd control measure. Pair it with the Storm Front grenade to take down enemy shields and you’re laughing. 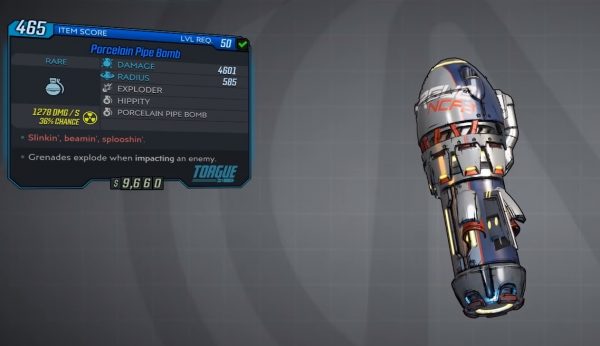 How to get the Porcelain Pipe Bomb

To get the Porcelain Pipe Bomb, head to Eden-6 and complete the Going Rogue mission to unlock the Raiders of the Lost Rock side quest. You can pick this up from the bounty board in Reliance.

Complete Raiders of the Lost Rock and head back to see Dr Miles Brown who’ll give you the Porcelain Pipe Bomb as your reward, then have at it. It can take out the likes of Captain Traunt and the Graveward in about 3 seconds, so watch this space to see if it gets nerfed in future updates.

For more on Borderlands 3 guides, here’s how to get free Golden Keys with Shift Codes, farm Eridium, and a look at some of the best character builds we’ve seen so far.