Up ’til now only preorder customers – along with a few competition winners – have gotten a taste of Ubisoft’s latest 3rd-person looter-shooter, but the server gates are now open to all new would-be Division recruits.

The Division 2 open beta takes place on March 1-4 on PC, PS4, and Xbox One. For the most part, the content in the open beta will be near identical to that of the private beta, with some exceptions. If the timings are the same as the Private beta, then here’s when you can start playing:

You can already pre-load the beta client on each platform by searching for “The Division 2 Open beta” on your storefront of choice. The game is a pretty sizable download, so you’ll want to give it plenty of time – especially since you don’t have that long to play the beta.

The good news is that players who still have the private beta installed will be able to download an update and be ready for Friday. Unfortunately, none of the progress made during the private beta is going to carry over, so you’ll have to start all over if you want to see the new content.

You’ll need roughly 50 GB of space to download The Division 2 beta, so you might need to clear some room if you’re playing on a vanilla PS4 or Xbox One.

Ubisoft expanded the beta’s already hefty chunk of content even further in the open beta. Players will have access to three main missions compared to two, but all other activities are unchanged. You’ll still be able to play five side missions, access the Dark Zone, as well as Skirmish PvP. The endgame Invaded mission seen in the private beta, too, will return.

That’s not all, though. The developer upped the level cap to eight, and unlocked a new skill – the Chem Launcher – for players to use alongside the three existing private beta skills. The Chem Launcher has two variants to choose from. Further, PvP players will be happy to find a new map in Skirmish, and PvE players will be able to unlock two additional Settlement Projects at the Theater.

Everyone will also get their first look at endgame content when it goes live on Friday too.

It includes one Invaded mission, gameplay at the level cap of 30, and the ability to unlock new Survivalist, Sharpshooter or Demolitionist specializations.

The Division 2 beta features a smattering of collectables in the explorable area of the map, so if you fancy gathering up as many of them as you can, check out our guides for the different pieces of intel left lying around Washington D.C.

Beta tests for popular games are often derided as glorified demos, but Ubisoft has circulated the patch notes with everything that’s been changed since the private beta, and it’s a big one.

Below is the full list of balance changes that are incoming with the Division 2 open beta:

The Division 2 is due on March 15, 2019, providing there aren’t any delays, and is available for pre-order. The Division 2 is getting a full year worth of DLC completely free for all players, with new areas and story missions available every three months.

You can check out the minimum PC specs required to play The Division 2 here.

The Division 2 Pre-order and Season Pass

There are five variations of The Division 2 available to pre-order and each guarantees entry into the beta. PC players will be able to access The Division 2 through Uplay and the Epic Games Store.

The Year One Pass hasn’t been given a separate price yet, though it does come with versions of the game except for the standard game. The pass simply allows holders access to the game’s free Year One Content seven days early. 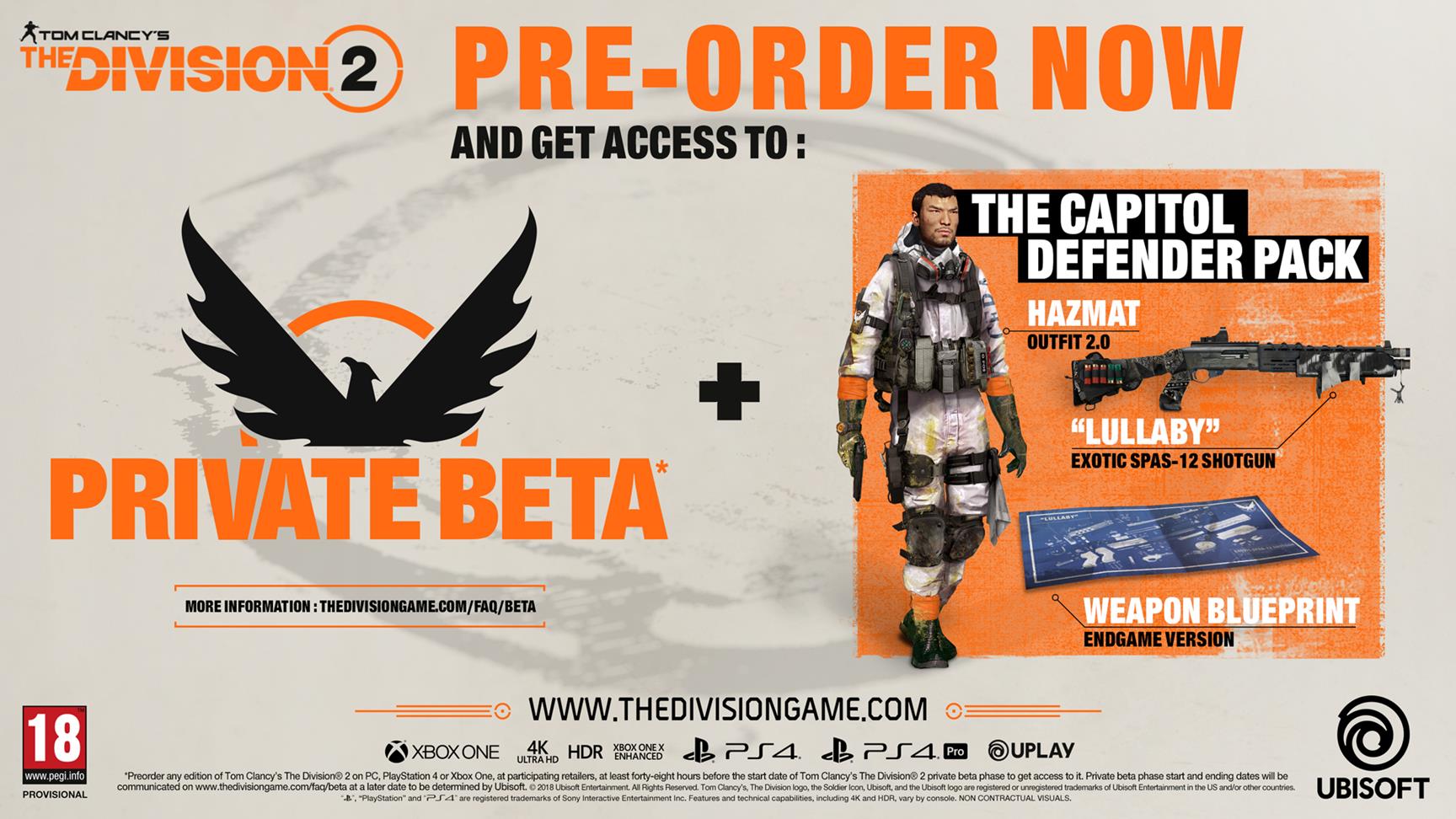 See below for a breakdown of the contents of each of The Division 2’s editions.

The Division 2 Gameplay, endgame and settlements

Ubisoft has added new Shield Challenges to The Division over the summer which, once unlocked, will provide you with some interesting in-game content once The Division 2 is released. It would be fair to say the company is doing all it can to keep our intrigue as we wait out the next six months.

Given that it isn’t out yet, you might think it a bit odd that we’re discussing the endgame this early on. Ubisoft is keen to stress that there will be a wealth of post-campaign events and challenges to complete, including eight-player raids for the first time.

You’ll also be able to experience the campaign and endgame events completely solo or as a regular co-op experience. Unless you invite other players into your sessions, you won’t see other players on your screen like you would in Destiny.

NPCs will play a bigger role in The Division 2. Safe houses will return; however, settlements are the interesting new addition.

Upon liberating an area of the map, a settlement will be built as NPCs move in to claim the area. A trader will spawn in the area, meaning even more side quests will become available, so you’re encouraged to explore the entire map.

There will be a big focus on helping locals which contributes to the open world feel of The Division 2. Whether you’re playing solo or co-op, you’ll be able to see the impact your choices have on the world around you.

The Division 2 changes to the mod system

Weapons have also been given an overhaul in The Division 2. The main change that’s coming is that mods won’t be available as random drops. Instead, they will be unlocked through gameplay, such as by completing challenges, taking part in raids and traditional story progression.

Arekkz breaks down the changes in his video and highlights several key features.

It’s also worth noting that once you have unlocked a mod it will be available permanently across all weapons, rather than juggling a limited inventory list filled with mods.

There will be a limited number of mods available to allow players to focus on experiencing a specific playstyle as opposed to constantly grinding for the best gear (we’re looking at you, Bungie).

Weapon damage will also be more appropriate this time around. Human enemies in The Division were notoriously difficult to take down, so the damage system has been revamped in The Division 2 so that weaker enemies will go down much faster.

When you shoot enemies with armour you should be able to see it physically break off, revealing weak points, which should make the action a little more interesting.

Levelling up and specialisations

After playing the demo at E3, we discovered that upon reaching the level cap, you’ll have access to three new progression trees as part of the games new Specialisation system, with Survivalist, Sharpshooter and Demolitionist being your options. Each has its own signature weapon, unique mods and skills. You also have the option to swap between each one and max them out.

Skills give you particular advantages in combat that can directly affect the outcome of your engagements. You can choose to focus on offensive abilities or utility roles.

The Division 2 changes to gear and Brand

There will be better build diversity and gear customization in The Division 2. Brands will be introduced to the game and will be different from the gear sets previously available in the first game. Players will have access to Brands right from the start and the feature is prominent in every area of The Division 2.

Each piece of a certain Brand will provide a bonus and wearing a full set of one particular Brand will grant an even bigger bonus. If you have three sets of gear that are also all the same Brand, you’ll get further bonuses again.

Some of the Brand pieces are tied to specific talents, so depending on the talent you’re after you might find yourself becoming an ambassador for that specific Brand.

The Division 2 will be taking a leaf out of Destiny’s book, with exotic weapons that each have their own lore to make them more unique, and will be a lot more powerful.

We’ll be updating this page regularly as we learn more about The Division 2, so watch this space.